Plan for controversial Jerusalem neighborhood halted, but conversation on settlement building will continue

The proposal is for the construction of 9,000 housing units on the site of Jerusalem’s former airport in Atarot 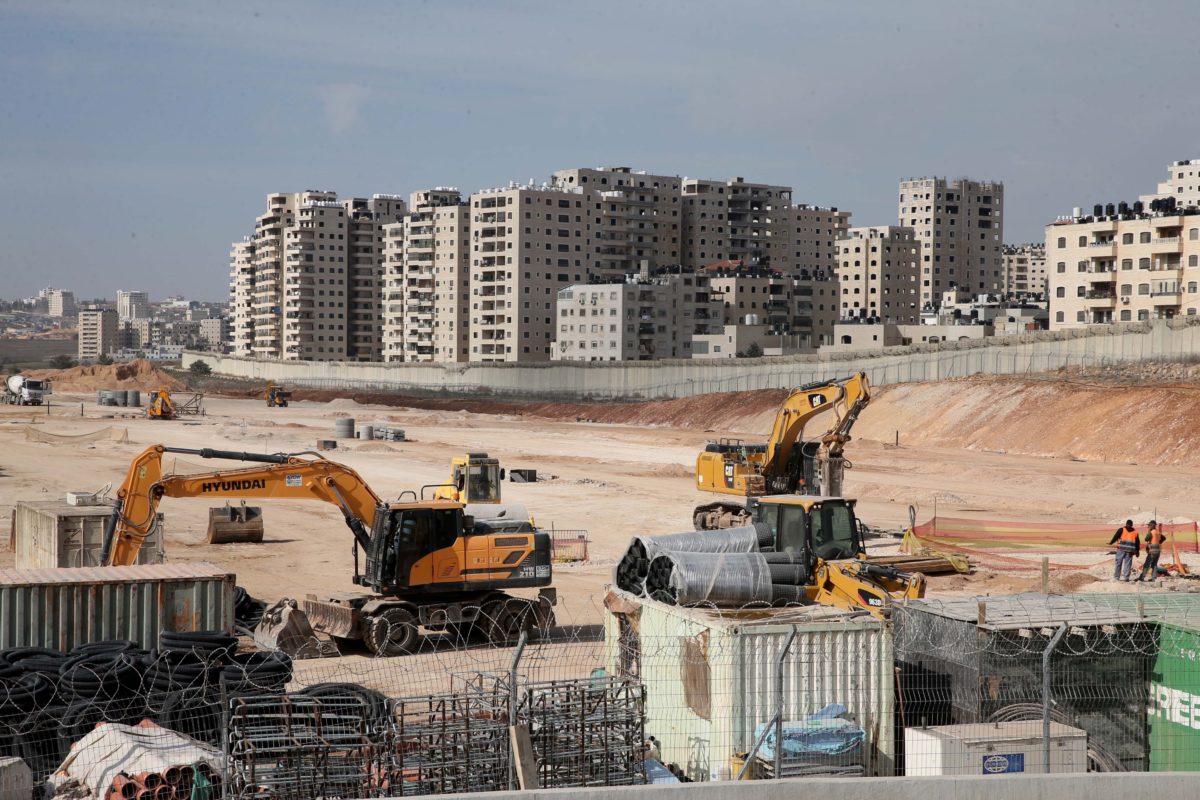 A construction site where Israel plans to build a massive Jewish settlement on the site of an abandoned airport in east Jerusalem.

Plans for the building of a controversial new Israeli neighborhood in East Jerusalem were delayed this week, but questions remain about why Israel’s new government, which has sought to avoid clashes with the U.S. on sensitive issues — and which includes two political parties that actively support a two-state solution — allowed the plan to be drafted and presented.

This proposal, which was given a perfunctory green light by the Jerusalem municipality last month, is for the construction of 9,000 housing units on the site of Jerusalem’s former airport in Atarot. The area, which Palestinians refer to as Qalandia, sits beyond the Green Line, in the heart of Arab neighborhoods and close to the security barrier on the southern outskirts of Ramallah. Israel annexed East Jerusalem following the 1967 Six-Day War and considers Jerusalem a united city, a position still not recognized by much of the world and contested by the Palestinians.

Monday’s decision by the Jerusalem District Planning Committee to halt the project pending an environmental survey comes following a warning last week from Secretary of State Tony Blinken, who asked Israeli Prime Minister Naftali Bennett in a phone call to “refrain from unilateral steps that exacerbate tensions and undercut efforts to advance a negotiated two-state solution, including settlement activity.” It also comes after Israeli officials reportedly notified the White House that the plan would not move ahead.

Yet, somehow, representatives from a range of government ministries spent several hours on Monday hearing the specific details of an already drafted plan, which aims to build multiple 12-story apartment blocks for the city’s burgeoning Haredi community, redesign the entire public transport system in Northeastern Jerusalem and turn the airport’s former terminal building into a boutique hotel.

Jerusalem officials, such as Deputy Mayor Fleur Hassan-Nachum, say the plan is crucial for a rapidly growing city of nearly a million residents. “We need more neighborhoods for young people to be able to buy and stay in the capital,” she told Jewish Insider ahead of the hearing.

“The city has already developed a flourishing industrial and commercial zone in Atarot. A residential area in an old, abandoned airport does not only make planning sense but will enhance that entire area of the city for Jews and Arabs alike,” she added.

But analysts and activists say the reasoning goes beyond the housing crisis, sitting at the core of a broad and fragile coalition which, after only six months in power, is doing everything it can to stay together, and is part of Israel’s complex political game.

When the coalition was formed last June, agreements eked out between eight parties with wildly opposing political ideologies purposely refrained from addressing the thornier issues such as settlement building. Instead, the focus was on ensuring former Prime Minister Benjamin Netanyahu would not return to power.

“What we have is a coalition that is unprecedented globally,” Avraham Diskin, professor emeritus from the department of political science at Hebrew University, told JI. “Usually, you have coalitions made up of parties that are relatively as close as possible to each other, or you have an oversized coalition that can survive if someone defects.”

In Israel, he continued, “the elections were not about policy or ideological differences, they were about Netanyahu… The rejection of Netanyahu is still so strong, and new elections are still so far off, that survival has become the main issue and people are ready to swallow any kind of frog, dead or alive.”

Retired Col. Shaul Arieli, an expert on Israeli-Palestinian affairs, said this plan – and similar ones being pushed quietly in and around Jerusalem – are being driven by right-wing elements in the coalition, including Bennett, who want to safeguard Israeli sovereignty in Jerusalem and firmly reject the creation of a Palestinian state.

“The reason for this plan is, of course, for internal benefit — for Bennett, [Justice Minister Gidon] Sa’ar and [Finance Minister Avigdor] Liberman and others who believe this is a way to keep Jerusalem united under Israeli sovereignty,” Arieli said to JI. “They do not believe in a two-state solution, and this is one more step in creeping annexation.”

Arab residents make up about 40% of Jerusalem’s population. “Israel needs to reverse this trend and increase the Jewish population, doing it with ultra-Orthodox is the easiest way,” he added.

Hagit Ofran, from Peace Now’s Settlement Watch project, also pointed to some officials taking advantage of the fragile coalition to promote agendas, with Housing and Construction Minister Ze’ev Elkin, previously a close ally of Netanyahu, taking a central role in the plans for Atarot/Qalandia.

“Elkin is a key player, and the prime minister is allowing him to promote it,” Ofran said, adding the lack of consensus on such issues means the government does not discuss it.

Left-wing parties in the government appear to, quietly, be placing barriers in the path of the Atarot project. It was representatives of the Environment Ministry, which is controlled by Meretz, who raised strong objections to it in Monday’s committee meeting.

In addition, Regional Cooperation Minister Esawi Frej, also of the Meretz party, is touting an alternative proposal to reopen the airport and allow for international travel for Palestinians. That plan has reportedly received backing from Transportation Minister Merav Michaeli, head of the Labor party.

Ofran cautiously welcomed the plan’s postponement on Monday, tweeting that the environmental survey “should take at least a year… I hope that the government will take this time to see how devastating the plan is for the chances for peace and for the future of Jerusalem.”

The process of planning and construction for new homes or neighborhoods in West Bank settlements, as well as in Jerusalem, is extremely convoluted and bureaucratic, with countless rounds of approval and objections. In some cases, such as Atarot, surveys are ordered; in others, lengthy court proceedings ensue as Palestinians and their supporters file legal challenges. Often it is years before building even starts.

In Atarot, plans for development have been raised several times in the past. Most recently, the Netanyahu government proposed building 4,000 homes in the area but backed down after the Trump administration, which designated the land for Muslim tourism to Jerusalem in its now-defunct peace plan, opposed it.

Peace Now’s statistics show that settlement-building plans promoted by Bennett’s government fell in 2021 to 3,646, compared to 12,159 in 2020. And figures from Israel’s Central Bureau of Statistics show that construction starts in the West Bank last year stood at 1,285, a fraction of the plans that were approved.

Yohanan Plesner, president of the Israel Democracy Institute, said that the issue of settlements was likely to be an ongoing challenge for this government, but it would not be enough to break it up or create a wedge with the U.S. administration.

“No new settlements will be built in the West Bank, but there will be continued dialogue about what natural expansion of the existing settlements means,” he said. “No one has an interest right now in breaking up this government because no one has a realistic alternative to it.”