Obama Presidential Center auditorium to be named after Elie Wiesel

The space, sponsored by Penny Pritzker, will honor the Holocaust survivor and Nobel Peace laureate 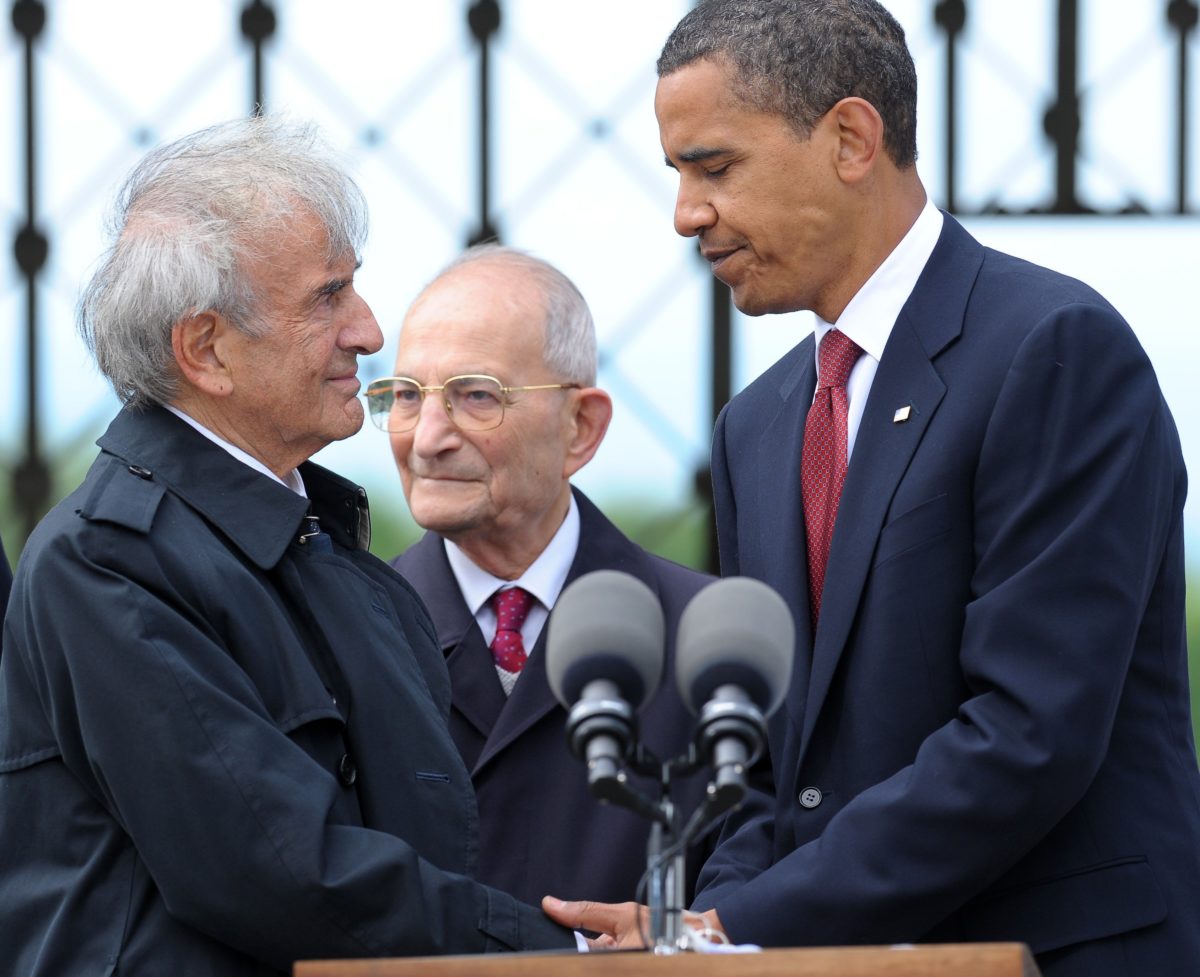 The auditorium at the Obama Presidential Center in Chicago will be named after Nobel Peace Prize laureate and Holocaust survivor Elie Wiesel, as part of an effort to honor “civil rights and social justice leaders whose significant contributions to society advanced justice and equality in America,” the Obama Foundation announced on Thursday.

The space was sponsored by Obama Foundation board member Penny Pritzker and her husband, Dr. Bryan Traubert.

“Elie Wiesel endured the unimaginable evils of the Holocaust and emerged as the world’s conscience in the struggle for human rights,” Pritzker said in a statement. “His unrelenting activism and prolific writing after bearing witness to such horrors is a call to each of us to never become indifferent. A more just and peaceful world is always possible.”

In 2009, Obama and Wiesel, accompanied by then-German Chancellor Angela Merkel, visited the Buchenwald concentration camp, where Wiesel was imprisoned during the final months of the war.

Upon the Nobel laureate’s death in July 2016, Obama called Wiesel “one of the great moral voices of our time.”

“Elie was not just the world’s most prominent Holocaust survivor, he was a living memorial,” a statement from the then-president read. “After we walked together among the barbed wire and guard towers of Buchenwald where he was held as a teenager and where his father perished, Elie spoke words I’ve never forgotten — ‘Memory has become a sacred duty of all people of goodwill.’ Upholding that sacred duty was the purpose of Elie’s life.”

Obama and Wiesel shared a warm relationship, despite a deep disagreement over the Obama administration’s approach to Iran. Wiesel was a vocal opponent of the 2015 Joint Comprehensive Plan of Action and attended former Israeli Prime Minister Benjamin Netanyahu’s address to a joint session of Congress that year, in which the Israeli leader warned against entering into a nuclear agreement with Tehran.

“Whatever differences they had,” Wiesel’s son, Elisha, told JI, “my father and President Obama shared a deep and abiding love for this country.”

“It is a tribute to President Obama’s legacy that the Obama Presidential Center Auditorium is being named after his friend, my father, who deeply believed in his leadership,” Elisha Wiesel said. “My father respected the president greatly, but was not afraid to stand apart from him when they found themselves on different sides of a pivotal issue, as they did with the Iran [nuclear deal]. Honoring my father despite that is a powerful message that this space will be used to debate and discuss the critical issues of the day — no matter how much our viewpoints may provoke or upset each other and test our friendships.”

In 2016, Pritzker, then the secretary of commerce, quoted Wiesel in remarks she delivered at a ceremony in Kyiv, Ukraine, marking the 75th anniversary of the Babyn Yar Massacre.

“In times like these,” she said, “it is all too easy to retreat into narrow self-interest. To ignore the plight of the stranger. To say to ourselves, ‘I am not the victim. This does not concern me.’ But, as Elie Wiesel taught us, ‘Neutrality helps the oppressor, never the victim. Silence encourages the tormentor, never the tormented.’”

Construction on the presidential center, located in Jackson Park on Chicago’s South Side, began in August after a series of legal challenges.