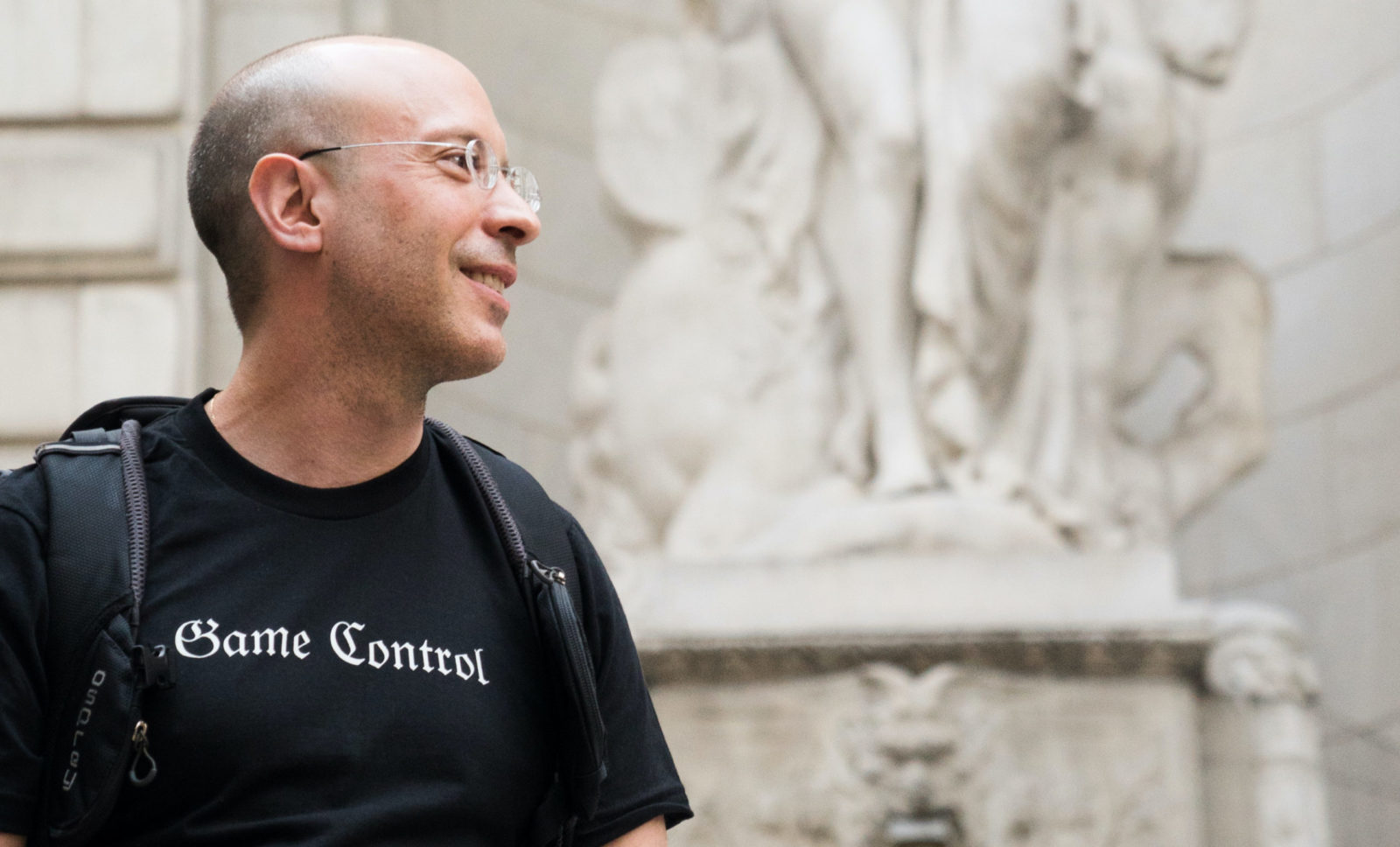 After a quarter century on Wall Street, the son of Nobel Prize winner Elie Wiesel is making plans for the next 25 years — and beyond

In another universe, Elisha Wiesel might be an attorney. Or an Israeli citizen. Or a video game creator. These are among the roads not taken for the 48-year-old Wiesel, who recently retired after a quarter century at Goldman Sachs.

But in this world, he is a husband and father of two embarking on retirement in a world mired in pandemic.

Wiesel has already crammed several lifetimes worth of experiences into 48 years. The philanthropist, activist and self-described geek with a knack for computer programming is setting out on the next stage of his life after leaving Goldman Sachs as its chief information officer at the end of last year.

It would be easy to define Wiesel by his former job, which was born out of a love for computer programming and technology, just as easily as it would be to define him by his famous father, the late Nobel Peace laureate Elie Wiesel.

But the younger Elisha Wiesel has charted his own course. Since leaving Goldman Sachs in December 2019, Wiesel has volunteered on a presidential campaign, begun to archive his father’s writings, joined the board of a social justice non-profit and prepared his daughter for her bat mitzvah.

And he’s just getting started.

Growing up as the son of Elie Wiesel was not without its challenges. As a high schooler at the Ramaz School, the younger Wiesel felt confined by a world in which everyone knew ‘the’ Elie Wiesel. “Everybody knew who I was, every minute of the day, who my father was. There were all these expectations. And it was very difficult to be anything other than in the shadow of my father in some sense.”

Despite a love for technology in his pre-teen years, Wiesel joined Ramaz’s mock trial team — “People were not interested in hanging out with somebody who’s programming computers,” he said. He intended to go to college and from there, to law school. A chance interaction during his freshman year at Yale changed his life’s path.

“I was sitting next to this one guy in the computer center one night, and he was just having such a better time than I was. I was writing some paper on literature or history. And he was having a much better time and I was like, What are you doing? He’s like, I’m doing a programming course. And that’s kind of how I got sucked back in freshman year.”

Elisha Wiesel went on to graduate with a bachelor’s degree in computer science in 1994, and would soon join Goldman Sachs.

But before Wall Street, Wiesel had a brief stint in Israel, where he participated in a three-month paramilitary course through Marva Israel. “We were… learning how to fire an M-16 and infantry maneuvers and stuff,” Wiesel explained. “If you ended up making aliyah it counted towards your basic service though, because it was considered a real basic training. I made a lot of friends there. The big ‘road not taken’ is I decided to come back to the States rather than to stay and go with it. So that’s the biggest ‘road not taken’ question I think I have in my life, is what would it have been like if I made aliyah and stayed in Israel.”

Wiesel still makes regular trips to Israel, where his father’s side of the family lives. And the Jewish state still plays a role in the big decisions he makes.

Days after retiring from Goldman Sachs in December, Wiesel found himself volunteering on former New York City Mayor Michael Bloomberg’s short-lived presidential campaign. It was uncharted territory for Wiesel, who had never linked up with a political candidate. “I was so excited,” he said of joining the campaign. “I’ll never forget Mike flying out to Israel, when the Gaza War was occurring… The FAA was shutting down flights in and out of Ben Gurion Airport. And Mike was like, ‘This is crazy. I’m gonna go and I’m gonna stand with the people of Israel.’ I was so impressed by that. But more generally, that was the balance I was sort of looking for in the political spectrum — people who understood the need for social justice, but also understood that you know, the answer is not Marxism.”

Bloomberg suspended his campaign on March 4, just as the novel coronavirus began to shut down parts of the country. Wiesel’s family has felt, intimately, the effects of the pandemic — his mother-in-law passed away in the spring after contracting the virus.

Elisha Wiesel now splits his time between the Catskill Mountains and Connecticut with his wife and two children.

When in the Catskills, he hosts a regular minyan in his home, something that would have surprised a younger version of himself. Growing up, Wiesel eschewed observant Jewish practice, becoming more religious after his father’s death in 2016.

“My father was very clear with me. He gave me only really two guidelines in life. One was he expected me to marry Jewish,” Wiesel explained. “And the other thing was he asked me to say Kaddish after he passed. And I had originally thought that he was asking me to say Kaddish for him, that I was doing him a favor. I really realized only later, it was actually the reverse. He was kind of doing me a favor because, you know, I think that’s when my re-entry into Judaism kind of accelerated.”

Now a parent, Wiesel has worked to ensure his children have a solid Jewish foundation upon which to build. “The number one thing I feel I can do is perpetuate yiddishkeit, is perpetuate Jewish continuity, in my own home.” He may not have meant that literally, though he certainly practices it. His home is not only where he holds regular minyanim, but also where his daughter was bat mitzvahed in April. While untraditional in many ways  — it was held at home over Zoom — they used Wiesel’s father’s Torah.

“All of a sudden, when you have your own kids, and you think about what their kids are going to look like, all of a sudden, these things come into a different perspective,” Wiesel told JI. “And all the very passionately held, forceful ideas I might have had as a young person about religion as meaningless starts to dissipate when you realize the value of continuity and generational life.”

The concept of l’dor v’dor and Jewish continuity is a running theme in the family. Wiesel — whose first name is Shlomo, but goes by his middle name, Elisha — was named after his paternal grandfather, who died on the eve of the liberation of Buchenwald.

Wiesel spent April going through his father’s archives. “He passed four years ago and we hadn’t touched his office. So it was literally as he left it. Papers everywhere, magazines, notes, clippings, periodicals, manuscripts, correspondence, everything just totally disorganized because he knew where everything was, he could reach for it,” Wiesel said. “The stuff that he had with him in his home offices — as opposed to the stuff that was in his university offices — this was the stuff he worked with the most and wanted to have closest to him. So I spent a month kind of really immersed in my father.”

While much has been said and written about Wiesel’s father, it is his mother — an immigrant who, with the help of HIAS, then known as the Hebrew Immigrant Aid Society, came to the U.S. shortly after WWII with her family — who instilled in him a passion for social justice.

“When my mom came to this country, she kind of surprised her parents, started spending all of the weekends that she could down in Florida and the South, marching for racial justice,” Weisel explained. “She made friends who were black, who were gay, and I’m sure that you know, for Eastern European, my grandparents… I’m sure that they were floored by what my mom was doing, but she just jumped into that whole new world of America, that this was where we should be and she was extremely proud as a young person to be an early card-carrying member of the NAACP. And that meant a lot to her.”

For decades, Elisha Wiesel has been involved in philanthropic efforts, previously serving on the board of Good Shepherd Services and organizing Wall Street fundraisers that have brought in millions of dollars to benefit nonprofits around the city.

As he approached the brink of retirement, Wiesel began to notice a trend of Zionist voices being intentionally excluded from conversations in the LGBTQ community and other social justice issues. “My brain was exploding, I couldn’t process it,” Wiesel said. “When I started hearing Zionists are not welcome in things like women’s rights or African Americans’ rights? It kind of just drove me crazy because like, what are they going to turn my mom away from something like this? Really?”

It was through social media that Wiesel found Zioness, a progressive organization whose board he joined earlier this year. “I found Zioness before they found me,” he said. “And I just thought, like, ‘Oh my god, thank god, there’s somebody doing this right. Thank god, there’s somebody, you know, breaking this false duality of you can’t both be a progressive and a Zionist.”

In late 2019, he met with Amanda Berman, the organization’s founder and executive director. “Immediately, he asked a lot of questions, really good questions, the kind of questions that you get from someone who is really thinking about these issues,” Berman told JI. “They weren’t empty questions, trying to sort of pretend to be interested. It was like these were issues that were gnawing at him also, and he genuinely wanted to know how we were going to approach them.”

Before leaving the meeting, Berman asked Wiesel to join the Zioness board. “There was just something about the way that he was engaging and how interested he was in our work that made me think it was worth mentioning. And he actually said, ‘it’s something I would really consider.’ I honestly couldn’t believe it.”

While the organization has been largely limited to holding virtual programming since the start of the pandemic, Berman is looking forward to the eventual resumption of in-person events. “There’s something, I think, really empowering about being able to bring people together to have a conversation where they really feel part of a community and they’re sitting in a room with other people who share their values and their energy,” she said.

While retirement hasn’t gone quite the way Wiesel was expecting, he’s managed to find the silver lining of a situation that is at best challenging and at worst, with the death of his mother-in-law, devastating.

He has filled his schedule with daily Talmud study, electric guitar lessons and exploring new business and lay leadership opportunities. But his family remains a priority.

“I’ve gotten to spend more time with my immediate family than I ever have because of both retirement and COVID,” he told JI. “And it’s been nothing short of amazing. I love it. I’m looking ahead to the fact that in four and six years, they’re going to be going off to college. And I’m like, ‘Wow, that’s a real finite clock, and I better make the most of it while I can.’”