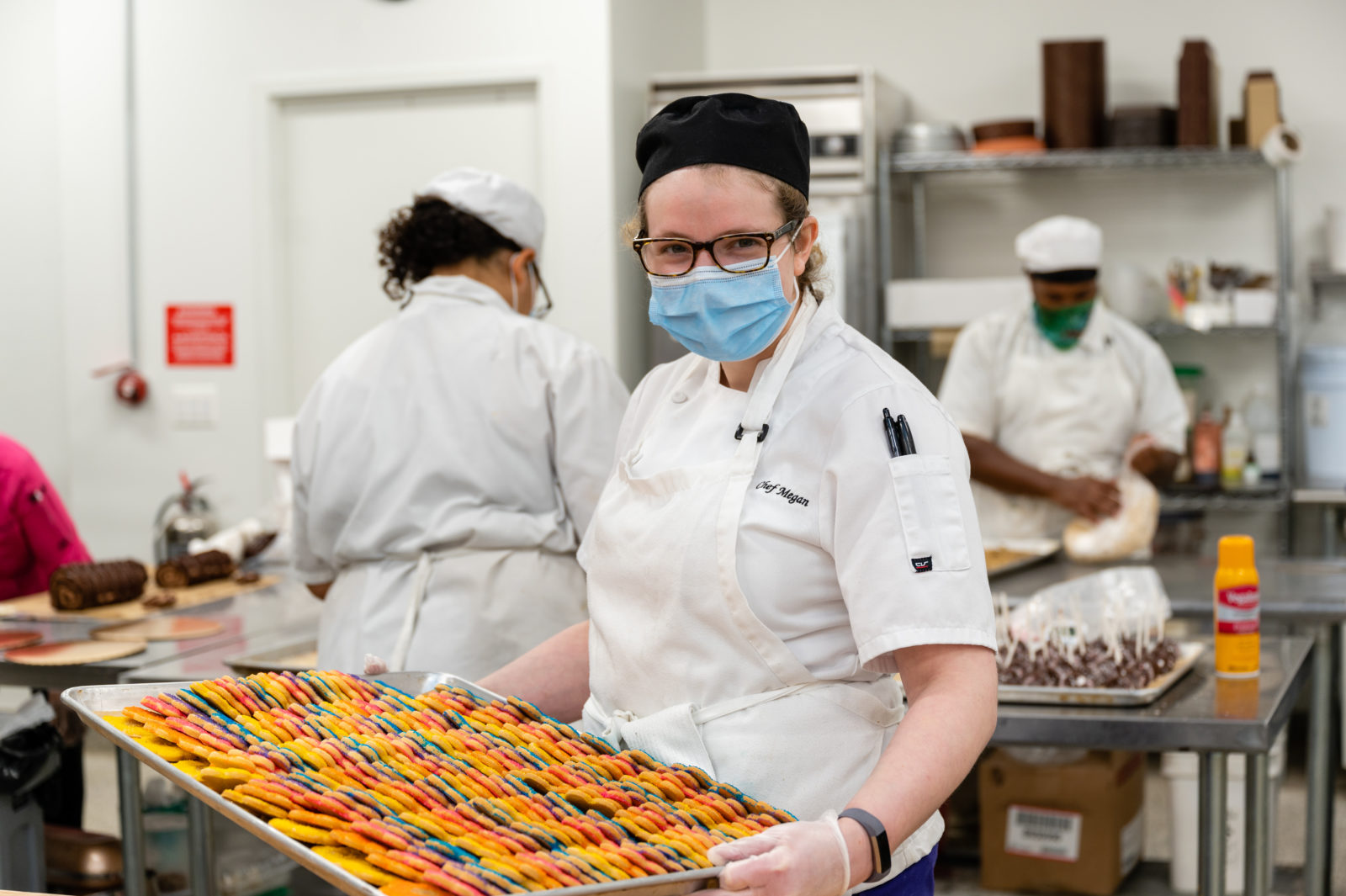 At Sunflower Bakery, life skills baked into the kosher cookies

On a recent Wednesday at lunchtime, the lobby of a large Rockville, Md., office building was nearly empty. Home to the offices of the Jewish Federation of Greater Washington, the building should have been filled with nonprofit professionals taking meetings or grabbing a quick lunch. But the normally busy hallways were quiet, with most of the building’s employees still working remotely due to the pandemic.

Inside Cafe Sunflower, the lobby-level bakery and coffee shop, a young employee named Michael excitedly greeted a customer. He rattled off the list of beverages he could make: single or double latte? Add fudge and make it a mocha? Low-fat milk or almond milk? He stood by, eager to serve, and he made a delicious cappuccino.

In front of him was a glass case filled with kosher cookies, cakes and other baked goods. Everything in the shop had been made by the students at Sunflower Bakery’s training kitchen a couple of miles away, where young adults with learning disabilities are taught the basics of baking and independent living: showing up to work on time, maintaining professionalism, communicating with employers and colleagues.

Michael is one of those students.

“So many people who have been in special ed or received additional services all the way through school have been told always what they don’t do well, what they don’t know, the things that they can’t do. Their self-esteem really reflects that,” said Sara Portman Milner, a social worker who co-founded Sunflower Bakery in 2008 with Laurie Wexler. “When they leave school, and they’re supposed to get a job, their anxiety level is through the roof, because they’ve only really been told what they can’t do. They haven’t really been told, ‘You’re a wonderful human being, you’re capable of learning to be able to do something,’ and continually supported.”

Wexner and Milner say this type of skills-based training program is largely nonexistent, both in the D.C. area and beyond. Some establishments have garnered attention for employing only or mostly people with disabilities, like Bitty & Beau’s Coffee, a cafe that employs people with intellectual and developmental disabilities with locations in 12 states.

But what Sunflower Bakery does — training those people to then go into the community and get jobs at other institutions alongside neurotypical individuals — is much rarer. (Not to mention that the Rockville area, home to a large Jewish population, lacked a kosher bakery.)

“Those are staggering statistics,” said Jody Tick, who took over for Wexler as the bakery’s executive director last summer.

Sunflower’s pastry arts and hospitality programs together train about 36 students annually; each of them is with Sunflower for six months before finding jobs elsewhere. Just a handful stay on after as paid employees if they aren’t able to find jobs in the community.

“They’re treated like they’re going to be treated out in the real world, because it doesn’t help them to sugarcoat it,” said Wexler. Students learn things like “how to advocate for yourself, how to show up every day clean, ready to go, leave your stuff at the door. How to have a professional conversation. Not bringing your personal stuff or your personal questions to work. These are things that even employers that don’t hire our students say, [that] they wish their employees would learn these skills as well.”

Hospitality students learn the hard skills of working point-of-sales systems, making beverages like Michael’s, packaging and merchandising. It’s also the soft skill of customer service, which does not work for all of Sunflower Bakery’s students.

“Some people who are introverts, like that just exhausts them to no end,” said Tick.

When Wexler and Milner created Sunflower over a decade ago, all they knew was that too few young adults with learning differences were being trained to enter the labor force, and that there weren’t enough kosher baked goods in their part of Montgomery County.

“We started in Beth Shalom, which is my synagogue, in the kitchen. They just donated space,” Wexler recalled. The initial handful of students were “young adults that learned about it from therapists who said they were interested, and the Jewish Foundation for Group Homes.” (Today, the bakery does not require students to be Jewish.)

She and Milner went around to synagogue members and other friends in the local Jewish community, giving out honey cakes for free to show that not only were they doing a good thing, they and the trainees were also baking something that tasted good.

Today, the nonprofit is funded by a mix of donations and revenue. Sunflower sells about $500,000 of baked goods yearly, and students also have to pay a fee to be part of the training program (paid by either their family, a state or local agency or a grant).

After less than a year, the growing team moved out of the synagogue and into a dedicated space — and a few years later, they moved into a stand-alone building on Halpine Road that Sunflower funded and built.

Inside is another cafe space, behind which is the training kitchen. At the time of Jewish Insider’s visit, students were working with challah dough, learning to cut it into the three pieces for a braid and weighing each on a baking scale.

“For so many people who have developmental disabilities, they can’t handle many other kinds of situations, but they can learn through repetition and structure. People, especially on the autism spectrum, it’s a great match for them, because many of them like everything the same: routine, ritual,” said Milner.

A whiteboard that hangs kitty-corner to a large storage unit filled with baking supplies lists the day’s steps, with a preview of the next day’s as well. Students receive weekly lesson plans so that nothing comes as a surprise to them.

“We pride ourselves on how people learn the best,” said John Katz, who worked as a chef at fine-dining restaurants before joining Sunflower Bakery as its program director. “Everything is very scripted over here.”

The steps for making challah are written out in simple, straightforward language: Scale. Mix 10 minutes. Ferment. Punch. Portion. One section of the board explains basic work requirements. “Remember: Walk with purpose. Work with urgency. Work in your own space. Eye contact.”

Liz Hutter, the bakery’s culinary director, joined Sunflower after a career as a pastry chef working in high-end bakeries. “I had been feeling a little unfulfilled,” Hutter said. This job wasn’t what she had planned for her next step — “I was thinking more like women’s rights” — but since she came on early in the bakery’s history, she created much of the training program from scratch.

Much of it is instruction that an average neurotypical baker wouldn’t think twice about. But if Hutter told the students to arrange cookies in alternating rows of seven and six on a tray, they couldn’t do it.

So she put together a curriculum, creating new methods to help her students learn skills that might seem like common knowledge to others.

“I’m trying to teach them how to feel and experience independence in the workplace. It’s not just a pastry skill. They’re going to have to learn new skills everywhere they go,” she said.

Many of the students go to work in local bakeries and restaurants, but some choose other industries.

“I have students right now at hospitals, country clubs, private bakeries, a chocolaterie, wholesale bakeries,” said Katz. One student recently landed an interview for a front-desk post at a veterinarian’s office. Katz helps them through the employment process, and he also stays in touch in their early months on the job. The transition is often not easy.

“There’s a lot of sad stories, honestly. And I wish we could get through to more employers, so they would understand what the potential is,” noted Hutter. “Other times it’s the opposite experience, where someone’s like, ‘Oh, I had no idea this was going to be such a great experience for my staff. They get to see this too. It helps the whole morale of my business.’”

Katz tracks progress not just in terms of getting students jobs. It’s the other things they work up the confidence to do as well. “In this last year, I’ve had six students gaining the confidence to move out and live independently. I have two that work part-time jobs while going back to college. I have three that have gotten driver’s licenses,” Katz noted.

The bakery is not meant to be a one-stop shop for all of customers’ baking needs. The students learn through repetition, and elaborate custom cakes are not in the mix.

Katz said, “99.9% of [customers] are like, ‘Oh my God, now I love it even more,’” upon learning of Sunflower’s mission. “But then you have that .01% that’s like, ‘I still want a purple sheet cake with, you know, fondant and dinosaur statues and all this,’ and we’re like, ‘Yeah, we’re just not that.’”

But there are also customers who want to support Sunflower, which makes seasonal Jewish baked goods — hamantaschen on Purim, menorah cookies on Hanukkah — and hope it might make some Christian-themed goodies, too.

“I can’t tell you how many times we get requests for Christmas cookies or Yule logs or coconut cakes on Easter,” Katz said, laughing. “They’re like, ‘Yeah, I don’t care. We want to support you.’ So yes, the community at large has supported us.”