Miss Universe tours Jerusalem ahead of first-ever pageant in Israel

Andrea Meza arrived in Israel on Monday, ahead of next month's competition, which will take place on Dec. 12 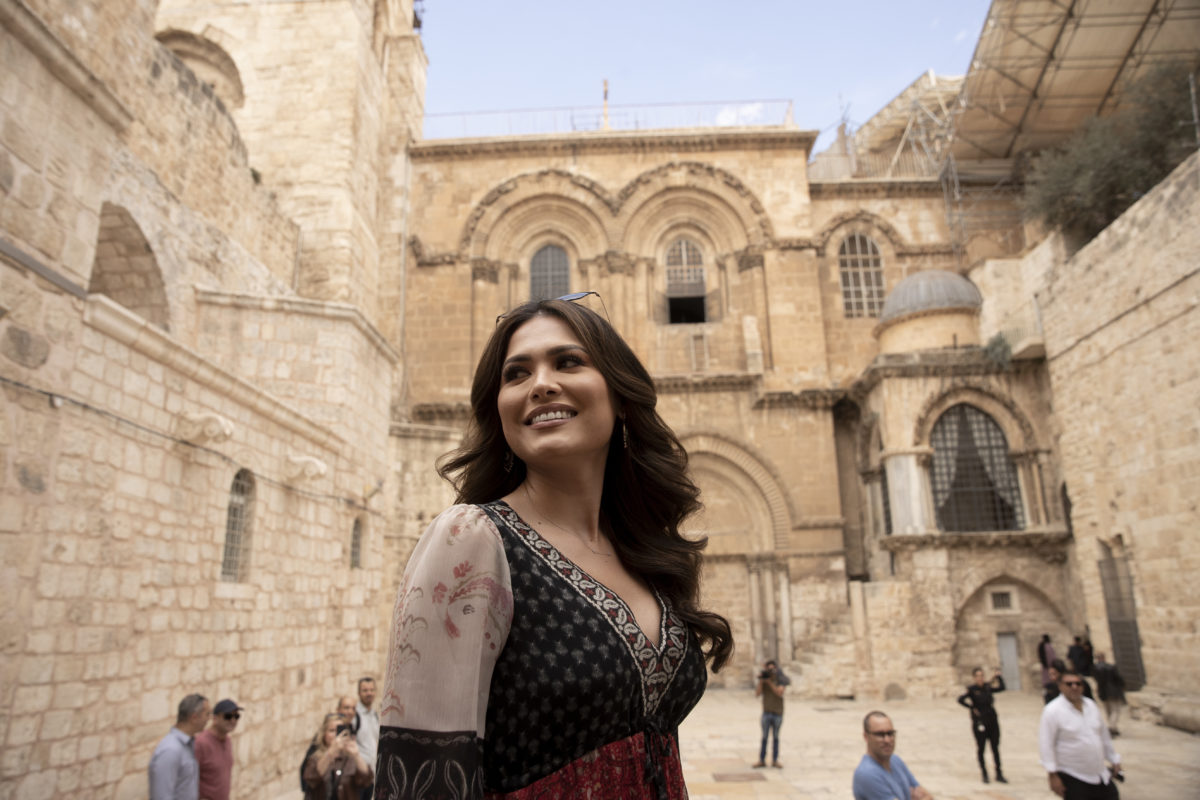 Andrea Meza, the reigning Miss Universe from Mexico, poses in front of the Church of the Holy Sepulchre as she tours the Old City of Jerusalem, Wednesday, Nov. 17, 2021, ahead of the 70th Miss Universe pageant being staged in the southern Israeli resort city of Eilat next month.

Draped in a white and silver satin sash but minus her crown, the winner of last year’s Miss Universe pageant, Andrea Meza, toured Jerusalem’s holy sites on Wednesday, expressing hope that the international beauty pageant will serve as a forum for empowering women and bringing together people of all faiths, nationalities and backgrounds.

“This my first time in Israel and I am very excited to see Jerusalem’s Old City,” Meza, 27, told Jewish Insider in an interview. “My family is Catholic and so for them, and for me, it was really important to get to know more about it. Being here and seeing all these different religions and cultures mixed in the same place, I really think I have learned a lot during this trip.”

Meza, who hails from Mexico, arrived in Israel on Monday, ahead of the annual competition that is set to take place here for the first time — in the southern city of Eilat, on Dec. 12.

After touring the Old City and visiting the Church of the Holy Sepulchre, which Meza called “amazing,” the beauty queen met with officials in the Ministry of Tourism, who are hoping the event will kickstart Israel’s tourist industry weakened by the pandemic.

The crown, she confided in JI, was too heavy and too valuable to wear on a day out. A software engineer and model, Meza highlighted the value of such a high-profile platform, which draws an estimated audience of over 500 million viewers in some 190 territories.

And, she dismissed controversies lobbied at such beauty contests in the age of #MeToo, heightened feminism and political correctness. Meza also said she had not felt pressure to boycott this year’s pageant because it is taking place in Israel — as some of this year’s contestants have.

“I have to mention that Miss Universe is not a political or religious movement,” Meza, who was crowned last May after the 2020 pageant was postponed due to the COVID-19 pandemic, stated. “It is about the women who are participating, about what they have to offer and about all of us coming together.”

“There’s something like 70, 80 or 90 countries participating, all with different cultures, different beliefs, and we’re all together, experiencing and getting to know each other, learning from each other,” she continued. “I think that’s the most important part that we should tell the world and not make it political.”

Paula M. Shugart, president of the Miss Universe Organization, said in a statement that the event “has the distinct advantage of bringing a global spotlight to world issues,” and that holding it in Eilat “will provide a great space for our contestants to learn and grow together.”

Despite appeals not to politicize the event, the fact the 70th annual pageant is taking place in Israel has evoked some strong responses. On Sunday, the government of South Africa announced that it was dissociating itself from a decision by the reigning Miss South Africa, Lalela Mswane, to take part. Government officials cited Israel’s “atrocities against Palestinians.”

However, Miss Universe United Arab Emirates will participate for the first time and Miss Universe Morocco returns to the competition after a four-decade absence, the organizers said. Both countries signed normalization agreements with Israel last year.

“There were some comments on social media,” said Meza of her own decision to travel to Israel. “But I think Mexico and Israel have a good relationship.”

As a beauty queen crowned during a once-in-a-century pandemic, Meza’s reign of only six months was marred by countless COVID restrictions but, she insisted, it “changed my life.”

“I think some in the feminist movement see this competition as a man putting us on a stage in a swimsuit, but the reality is that it is my decision, and I get to wear whatever I want,” she said. “During these months, I tried to talk a lot about how we should embrace who we are, even if there are flaws because those are what make us unique.”

Meza’s first action as Miss Universe was to get vaccinated, she said, because she strongly believes “that it saves lives.”

“I think one of the reasons why Miss Universe is happening here is because Israel has handled the COVID situation in the best way possible,” said Meza, adding that she was not afraid to come to Israel.

“Sometimes headlines are more dramatic than what is really happening. It is the same with my country — people say, ‘Don’t go there, because you’re going to be kidnapped or robbed’— but the reality is there’s so many things that our country has to offer, good things,” she said.