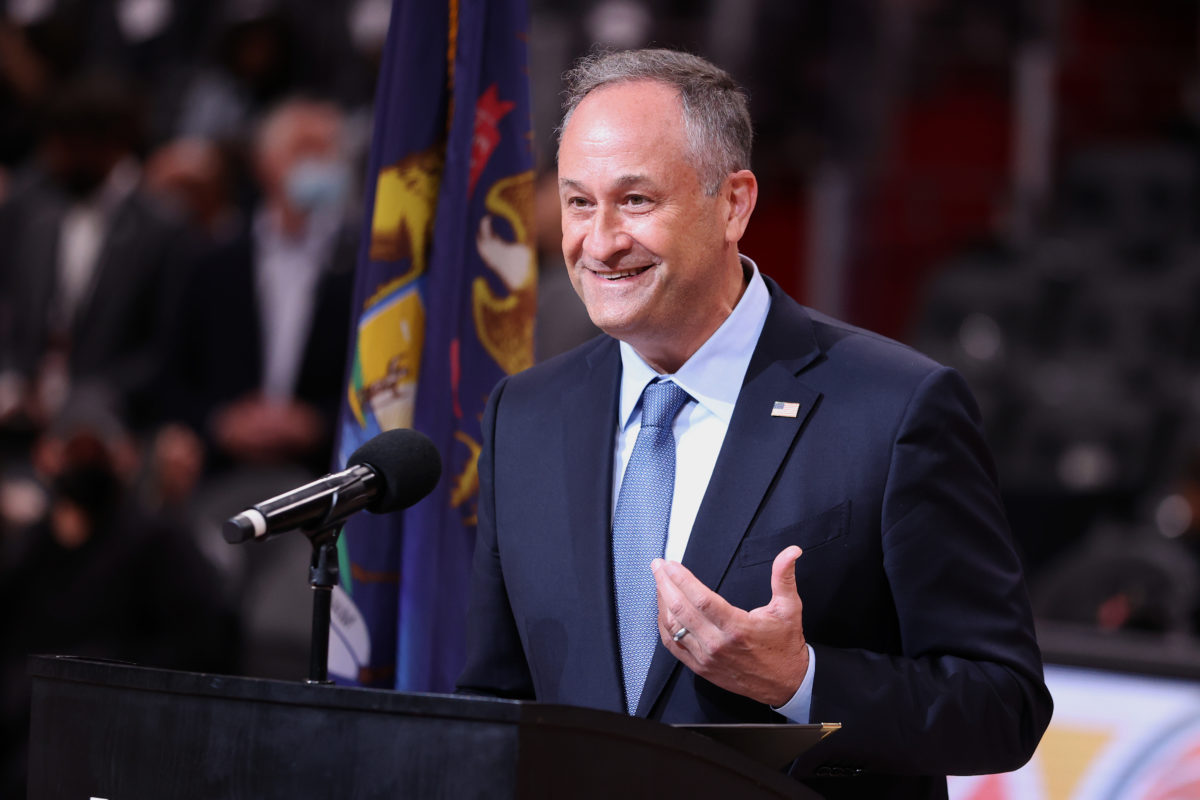 Doug Emhoff, husband of U.S. Vice President Kamala Harris, speaks at a naturalization ceremony for 16 people during halftime at a NBA preseason game between the San Antonio Spurs and Detroit Pistons in Detroit, Michigan.

At a small gathering of the Jewish Democratic Council of America’s leadership, Second Gentleman Douglas Emhoff spoke on Tuesday about his role in President Joe Biden’s administration and his connection to the Jewish community.

The Second Gentleman “talked about how his Jewish values and upbringing shape his core beliefs, and those are now informing the policies of this White House,” JDCA CEO Halie Soifer told Jewish Insider on Tuesday. “Our Jewish values inform our political views, and it’s why we found our home in the Democratic Party. We talked about shared values, shared beliefs and the fact that the Biden administration is furthering those values.”

Emhoff spoke at the in-person event to members of JDCA’s board and its Next Generation leadership council — about 50 people in all, some of whom attended virtually. “It’s very clear that being the first Jewish spouse is integral to who he is and what he is doing as a part of this administration,” said Soifer, who declined to offer specifics about Emhoff’s talk.

Emhoff was joined in the off-the-record conversation by Chanan Weissman, the White House’s liaison to the Jewish community, who answered questions from the group for an hour.

JDCA’s convening, which took place at a Washington, D.C. hotel, was meant to serve as a strategy session for the group heading into 2022. But despite Democrats’ recent losses in Virginia and polling showing low favorability for Democrats, Soifer said the gathering was upbeat.

“The retreat was very positive and forward looking. We celebrated the signing of the infrastructure bill [on Monday], we were focused on the growth of this incredibly impactful organization, and planning for wins in 2022,” Soifer told JI.

The gathering was the first time Emhoff had spoken to a JDCA crowd, although he and Soifer have had a relationship since she served as national security adviser to then-Sen. Kamala Harris.

“I traveled to Israel with then-Senator Harris in November of 2017, and he joined that trip,” Soifer recalled. “It was his first time in Israel, and it was an incredibly important and meaningful trip.”

The JDCA retreat took place just over a week after the Republican Jewish Coalition’s annual Las Vegas convention, which brought together several potential 2024 presidential candidates and hundreds of attendees for a victory lap after a series of Republican wins in Virginia.

“When we make our plans, we don’t think about the RJC. That is their annual Las Vegas casino party every year. It has nothing to do with us,” said Soifer. Still, she said, “We do plan to have a conference at some point. But this was not that.”