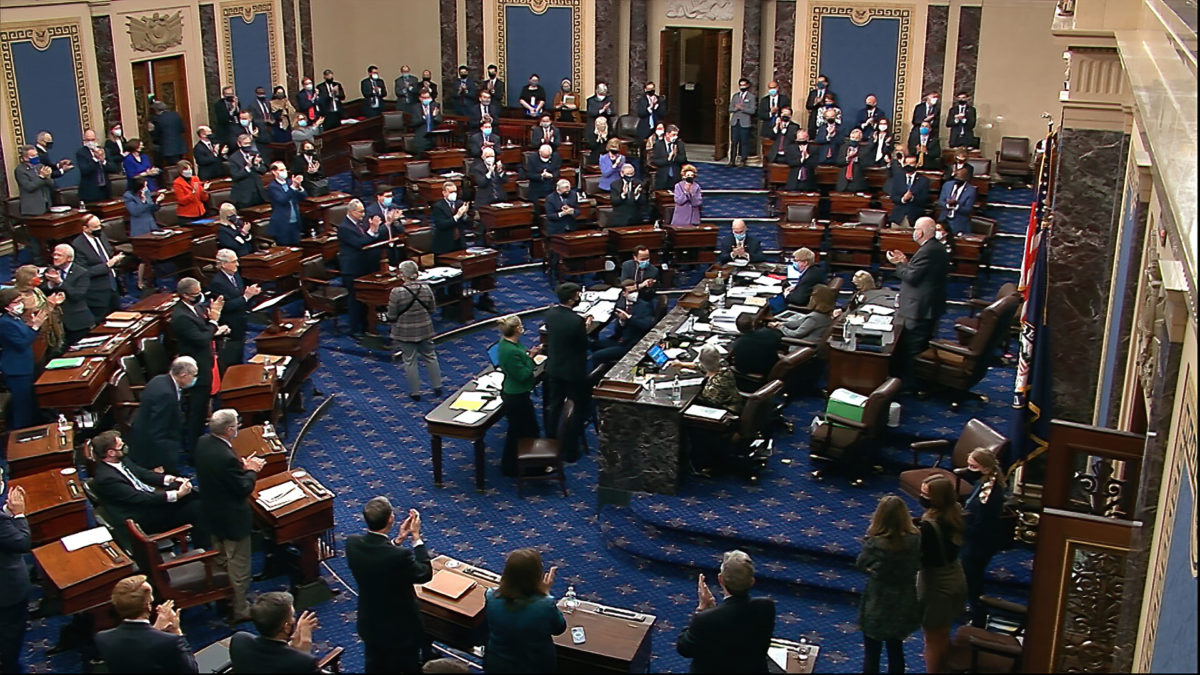 Senators stand and applaud support staff before the final vote on the Senate version of the COVID-19 relief bill in the Senate on March 6, 2021.

Senate Democratic leaders proposed a $150 million increase in Palestinian aid in the draft of its state and foreign operations funding bill, which was released on Monday, bringing the total amount of recommended aid to $225 million.

The proposal is $40 million more than President Joe Biden’s budget request, but well short of the $1 billion for Gaza alone that Sen. Bernie Sanders (I-VT) requested in a recent letter to Senate Majority Leader Chuck Schumer (D-NY). The House proposed the same $150 million increase in its budget proposal.

David Schenker, a senior fellow at The Washington Institute for Near East Policy and the former assistant secretary of state for Near Eastern affairs, told JI in July that supporters of the $225 million proposal may face a tough battle in Congress.

“At the end of the day, it’s a pretty slim margin,” Schenker said at the time. “I think that a lot of the concerns haven’t been satisfied… so they’re going to have to fight it out. But we’ll see if we know how hard the administration pushes.”

Sander Gerber, the CEO of Hudson Bay Capital and a key figure in crafting the 2018 Taylor Force Act, which restricts aid to the Palestinian Authority as long as it continues payments to the families of terrorists, told JI yesterday that Palestinian aid “is definitely acheivable,” but noted that any aid to the PA would violate Taylor Force.

The Senate also included a new oversight provision, supported by J Street, requiring that the secretary of state meet with countries receiving U.S. military aid to ensure compliance with U.S. law and national security policy. The provision has been framed by some proponents as an initial step toward limiting the ways in which Israel uses U.S. aid.

AIPAC spokesperson Marshall Wittmann emphasized to JI when the provision, which did not face opposition in the House, first appeared in the House bill that it “merely codifies the current practice” and would not place any further conditions on aid to Israel.

The bill also includes $3.3 billion in military assistance to Israel set to be provided next year under the 2016 Memorandum of Understanding between the U.S. and Israel.

Like the House, the Senate proposal places a raft of new conditions on U.S. aid to Egypt, tying $300 million of the more than $1.4 billion in proposed aid to steps to improve human rights in the country. While the Secretary of State can waive the conditions on most of this aid, $75 million is tied to conditions related curtailing arbitrary detentions and prisoner mistreatment that the Secretary cannot waive.

Experts told JI in July that the Egypt provisions are unlikely to garner enough support to make it through Congress.

Democrats will likely face hurdles in passing any of these bills in their current form. Senate Republicans have expressed their opposition to Democrats’ funding proposals in general, arguing that they do not provide enough additional defense funding. Democrats will have to strike a deal to win the support of 10 Republican senators or pass a continuing resolution holding government funding at 2021 levels.