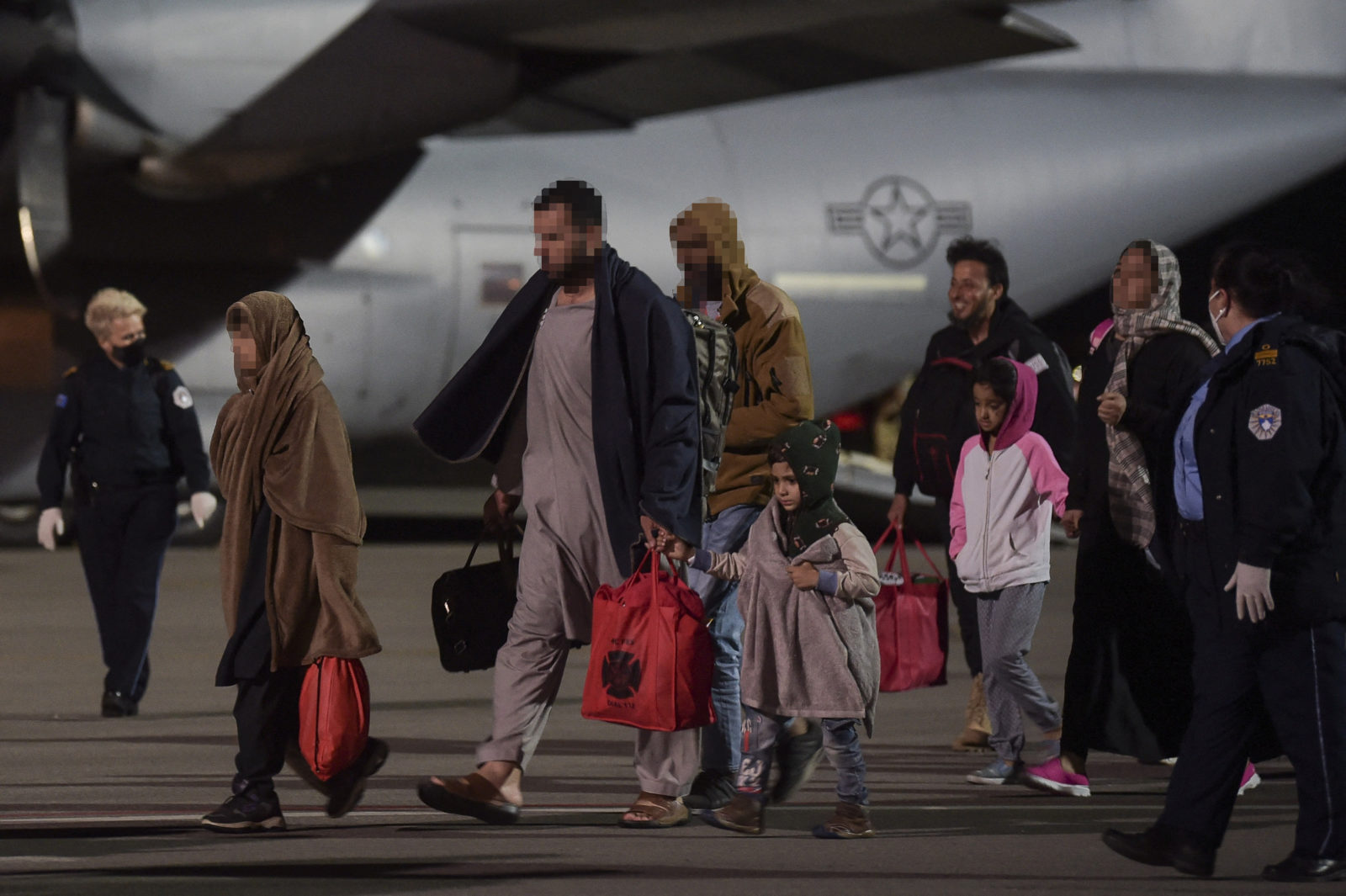 Inside the effort to extract one family from Afghanistan

Arizona State Rep. Alma Hernandez worked for weeks to try to get a family out of Afghanistan

Two weeks ago at the Arizona State Capitol, Alma Hernandez, a Democratic representative in Tucson, watched Gov. Doug Ducey sign her long-awaited Holocaust education bill into law. For Hernandez, who is Jewish, the legislation was an achievement of profound significance, but in the moment, her mind was elsewhere as chaos unfolded in Afghanistan.

For the past few days, Hernandez had been in close and nearly constant communication with an Afghan family with whom she has long-standing personal ties — working, to no avail, in a desperate, around-the-clock effort to help them escape before an ill-fated U.S. withdrawal that would leave the country under Taliban control not seen since the early 2000s.

“It was very, very hard to focus,” Hernandez said of the recent bill signing ceremony, “especially having conversations with one of the survivors who was there, who was expressing how she felt that this was very similar to the Holocaust and what happened to her family.”

As the last American soldiers emptied out of Afghanistan, the family Hernandez is assisting remained in hiding at a safehouse in the capital city of Kabul, just a mile from the airport, with no apparent possibility of immediate evacuation.

Hernandez, for her part, has been struggling to ward off a growing sense of helplessness. Still, she has not abandoned hope for the family of mine operators from the north-central province of Panjshir Valley, who she has gotten to know well on their annual visits to attend the Tucson Gem Show.

“They’re here so often because of the work that they do that they’ve just become like family to us, and it’s really sad to see that they’re needing this assistance and help now and there’s not much we can do,” Hernandez said in an interview with Jewish Insider on Tuesday evening. “It’s been extremely frustrating.”

Hernandez sighed. “There really haven’t been any instructions or directions on what to do now,” she said. “We’re not giving up on trying to get them to safety, of course, but we are definitely just waiting at this point.”

“What is the plan?” she wondered aloud, sounding increasingly exasperated. “I know the president is saying we will do our best to take out our allies and those Americans who want to get out, but really, what is the plan to do that?”

Her open-ended question underscores a broader sense of confusion over the Biden administration’s exit from Afghanistan, as Democratic and Republican lawmakers have, absent clear guidance from the White House, devised their own rescue strategies to save the stranded.

“We certainly are not the only ones,” said Hernandez, who has publicly documented her humanitarian efforts on social media with the hope of reaching potential allies.

Her experience over 15 largely sleepless days and nights is a testament to the immense emotional wherewithal and tolerance for uncertainty required even of extraction efforts that have yet to succeed. In coordination with Sen. Mark Kelly (D-AZ), a personal friend, Hernandez has exhausted virtually every feasible option in a mad scramble to rescue the 23-member family that she says is now marooned in Afghanistan at great risk to their personal safety.

Within the past couple of weeks, Hernandez has spoken with a number of organizations on the ground in Afghanistan and even sought assistance from a Hasidic leader in Brooklyn who recently helped evacuate members of Afghanistan’s national women’s soccer team.

But Hernandez has had no such luck, even as she has broadened her search for help in securing visas as well as safe passage out of the country. “I did get in touch with other groups, who, first they asked for a certain amount, and then later, they wanted a lot more,” she told JI. “I wasn’t in a position to wire-transfer someone $75,000.”

“There’s no guarantee with anything,” she lamented. “I have a group that I spoke to yesterday, late last night, who said if you can get them to Mazar-i-Sharif we can put them on a list to fly them out. The only issue with that is it’s almost a 10-hour commute, so if you can imagine putting 11 adults and 12 children on a bus, where there’s so much uncertainty and so much danger, I just can’t make that call and that decision for the family. It’s something they have to do, and I don’t think they feel safe enough doing that right now.”

Hernandez made clear that the bus trip was just one of countless seemingly promising opportunities that have ultimately proved elusive in recent weeks.

“The amount of times I had to call and say, ‘Hey, just letting you guys know, get your bags, be ready’ — there was always a three-hour window for some reason, so if they don’t pick you up within the next three hours, they’re not showing up,” she said. “Can you imagine having to tell the family don’t go to sleep, please stay awake, you don’t want to miss this call, and then the call never coming? I mean, this happened so many times I lost track.”

A glimmer of hope, Hernandez said, came recently, when two family members were able to board flights out of Afghanistan and have since arrived in the U.S.

“The rest of the family was actually turned away,” she added.

The remaining family members — including a sizable assemblage of siblings and their children as well as a family matriarch — has found only momentary refuge in a friend’s house following what Hernandez describes as a violent run-in with the Taliban in which one brother, who worked as a military contractor for several years, was stabbed, though not fatally.

“The Taliban went into the home that they were in, so they moved, and they did tell them that they would be back,” Hernandez said. “They can’t be in the same spot for long. They’re not safe.”

According to Hernandez, the family is a prime target for the Taliban thanks in part to their military connections as well their association with Panjshir Valley, where armed resistance fighters are now engaged in a protracted battle to protect the only province in Afghanistan that has not yet fallen to the extremist group.

The family’s business dealings in the U.S., Hernandez added, have also made them vulnerable to the Taliban’s wrath. “That you do business in the U.S. and that your business has done well,” she said, “I think that creates anxiety for all of them.”

For the most part, Hernandez has been in contact with a man she describes simply as Abdul, whom she knows well from his sojourns to Tucson. She declined to reveal his last name out of concern for protecting his safety. Abdul and his brothers, Hernandez said, were supposed to be in Tucson for the Gem Show beginning this week, but their flights were cancelled as the Taliban took over.

“They’re just really great people. They’re Muslim, and they were here sometimes during Ramadan, and they would do their thing,” she said of the family. “They are very much aware that I’m Jewish and that we all go to services and such, and they’re very much aware of my Zionism as well,” added Hernandez, who is an ardent pro-Israel advocate. “It’s never been an issue because we’re all just very close friends.”

Recently, Hernandez said, Abdul texted her with a message she found particularly moving. “I know that the Jewish community will do everything they can to help us,” he told her.

“I think we have so much more in common than people think,” Hernandez said. “These are people who truly are very close to their families. They’re just very nice, loving and giving people, and unfortunately they’re caught in this situation that we can’t fix right now.”

On many occasions over the past two weeks or so, “I’ve lost hope and they’ve lost hope, and we’re all trying to just stay sane and hopeful,” Hernandez told JI. “But it’s really hard to keep faith and hope when you feel that every door is being closed on you.”

That feeling has only been exacerbated as the American troop withdrawal has come to an end and the Taliban has seized control of the airport in Kabul. “Right now, at this point, we’re just basically waiting, just waiting to see what happens, what the next steps will be,” Hernandez said. “No one knows, really.”

“Honestly, they’re all just very scared,” she said of Abdul and his family members. “I feel terrible.”

“I don’t know what to respond to them when they’re like, well, what do we do, we applied, we did this, we’ve done everything correctly, what’s going to happen next?” Hernandez said. “And my answer is, literally, I don’t know.”