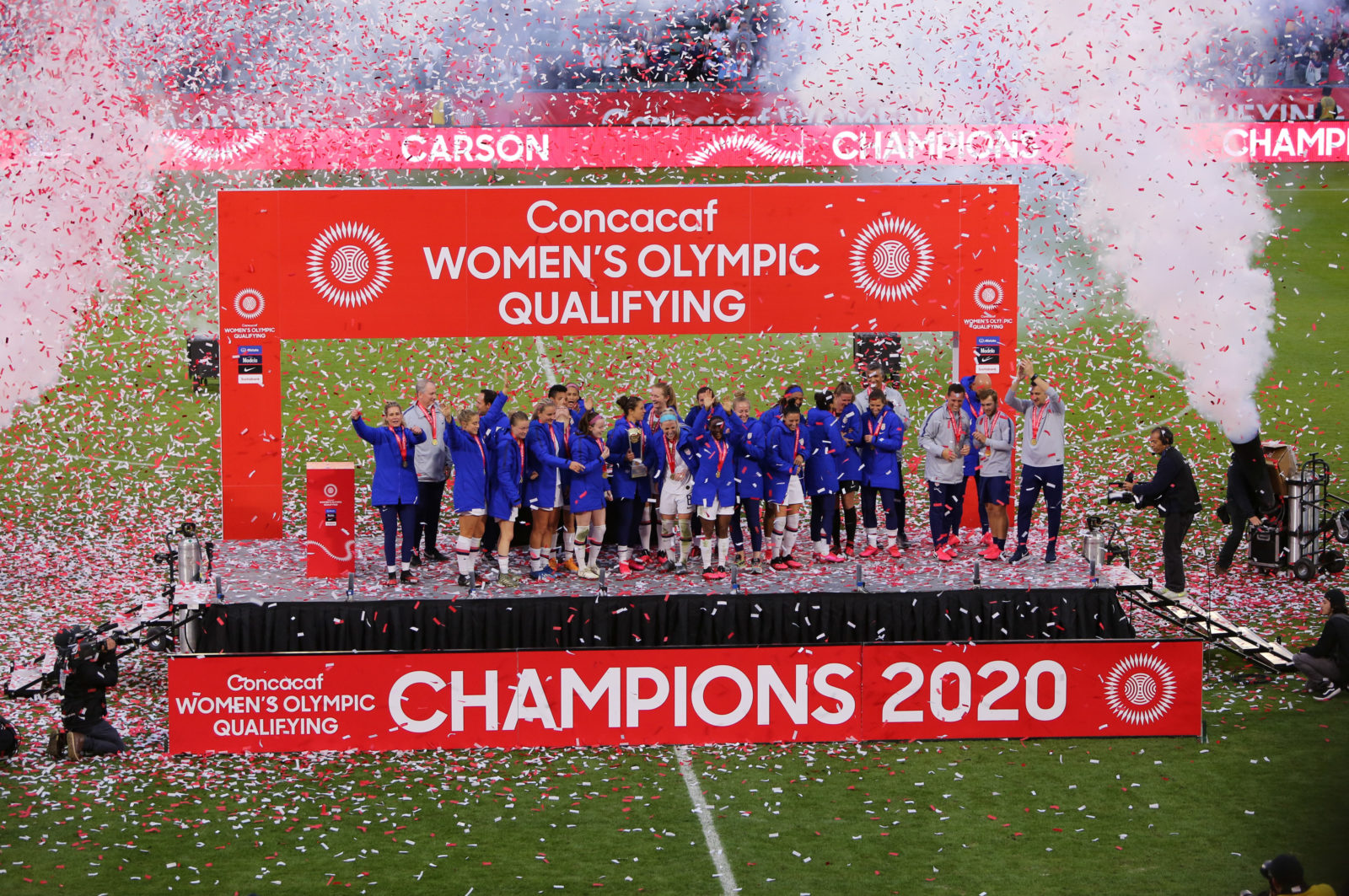 Eighty-nine cents on the dollar. That stark figure — representing what members of the U.S. Women’s National Soccer Team earn relative to the men’s team, and a reminder of the gender bias that persists, even for World Cup champions — lit a creative fire under producer Abby Greensfelder. The result is a new documentary that is at once a sports story and a political manifesto.

“LFG” tells the story of the U.S. Women’s National Team’s quest for pay equity amid a long-running legal battle with the team members’ employer, the U.S. Soccer Federation. The top-ranked USWNT takes the field against Sweden tomorrow for its first 2021 Summer Olympics match.

Greensfelder, the film’s producer, is the founder and CEO of Everywoman Studios, a production company focused on telling women’s stories. “I felt like there was a dearth of places where women’s stories were being told,” Greensfelder told Jewish Insider. “There were lots of areas, sports being one of them. I think politics is one [and] history, science, exploration.”

“LFG” — the acronym of the team’s unofficial rallying cry, “Let’s F***ing Go” — shows some of the banner moments for the USWNT and features interviews with players known for their athletic prowess on the field and their political advocacy off it. Megan Rapinoe, the pink-haired former captain of the team, features prominently in the film. One shot zooms in on her face as fans cheered, “Equal pay! Equal pay!” at the 2019 World Cup, which the U.S. won.

The movie has a political message to share, but it also aim to counter one of the prevailing myths in modern sports: that women aren’t as good or as fun to watch as men.

“I hope that people watch this and are pulled in and feel entertained, both by the movie but also by the soccer, by their athleticism and by their power,” said Greensfelder. “This is a movie that’s for everyone who’s interested in the underdog and people who are trying to fight against the system. Whether or not you’re a soccer fan, I think that female athletes are exciting to watch.”

The timing of the film’s release was meant to coincide with the Summer Games — last year’s Summer Games, which were postponed because of the COVID-19 pandemic. Greensfelder hoped to end the movie with the USWNT triumphant, both on the field and in the courtroom. Neither has happened yet. “This film is coming out just as they’re going into the Olympics, and here they are, it’s like Groundhog Day,” Greensfelder said. “They still haven’t settled their case. They still haven’t won their case. And here they are, again, going to prove their worth on the field.”

The USWNT alleges that the federation has discriminated against team members on the basis of their gender by paying male players more than the women. Female players earn 89 cents to every dollar earned by a male player, and men earn almost double in bonuses for World Cup appearances. All 28 members of the women’s team sued their employer in 2019, three years after filing a since-stalled complaint with the U.S. Equal Employment Opportunity Commission and three months before winning the team’s fourth World Cup victory.

In May 2020, a federal court rejected many of the players’ claims. But an agreement in December between the players and federation settled the players’ disputes over working conditions and allowed them to continue their legal fight for pay equity, which has not yet been resolved.

“LFG” has received some criticism for not providing equal opportunity for the players and U.S. Soccer to present their cases. “We have a specific point of view in the movie and are so clear about that,” Greensfelder argued. The film does not interview any members of the men’s team (who did not make it to the Tokyo Olympics) or anyone from USSF, who declined to participate in the film. “We were less interested in all these external voices,” Greensfelder said.

“LFG” is Everywoman Studios’s first feature documentary, and the film is somewhat of a passion project for Greensfelder. Decades ago, Greensfelder played travel soccer as a kid, Now, she is an avid Premier League fan and her two daughters play soccer, too — and her husband, The Atlantic staff writer Franklin Foer, is the author of a popular 2004 book about the sport.

The political nature of the documentary is new for Greensfelder, who has produced a diverse array of television series including “Say Yes to the Dress,” “MythBusters,” “Planet Earth” and “Dirty Jobs.” But in some ways, “LFG” takes her back to the start of her career.

“That was actually in some ways coming full circle for me, in that I had thought that I would work in more of a civil rights, legal-with-a-female-bent career,” Greensfelder recalled. “I ended up working in television, because I love photography, and I love writing.”

After overseeing content at Discovery, Greensfelder ran another company, Half Yard Productions, that produced reality TV shows . She eventually decided to sell that company and launch Everywoman Studios, driven by a desire to produce mission-driven content.

“I was at this point in my career [where] I sold my previous business and had a lot of success, and I thought, ‘Well, next, how can I give back and make a dent?’” she asked. “I’m building this business because I think it’s also good business. But it is a mission-driven business, which is driven by my core belief that we need to see more of these stories, and sometimes they can be harder to do.”

Greensfelder was born in Washington, D.C., and lived there throughout her career, often traveling to New York and Los Angeles — cities that are better known for filmmaking than the nation’s capital. But for Everywoman Studios, being situated in Washington has been an asset.

“I do think being an impact content company as we are, D.C. is a very interesting place to be because this is where issues meet policy and move progress,” she noted. The issue of gender equality and pay discrimination is a big one for some Democrats in Congress, and Greensfelder said that the film’s team has been trying to connect “with culturemakers and those that are thinking about how you can move policies and progress, to make a difference.”

With most major studios, networks and production companies still helmed by men, it can be harder to get stories about women greenlit, which Greensfelder hopes to remedy.

“The nature of how the business works is that the ideas really come from the heads of these companies. They sort of determine, in a way, what will be the stories that end up on television or in movies or what have you,” she explained. The company offers an accelerator program to help lesser-known female filmmakers develop their projects.

Some of the other projects in the works at Everywoman Studios include a docuseries about the FLDS Church, a fundamentalist Mormon church whose founder, Warren Jeffs, is now in prison for sexually assaulting a child; a series about immigrant grandmothers who connect to their cultures and their pasts through cooking; and documentaries about women in the music industry.