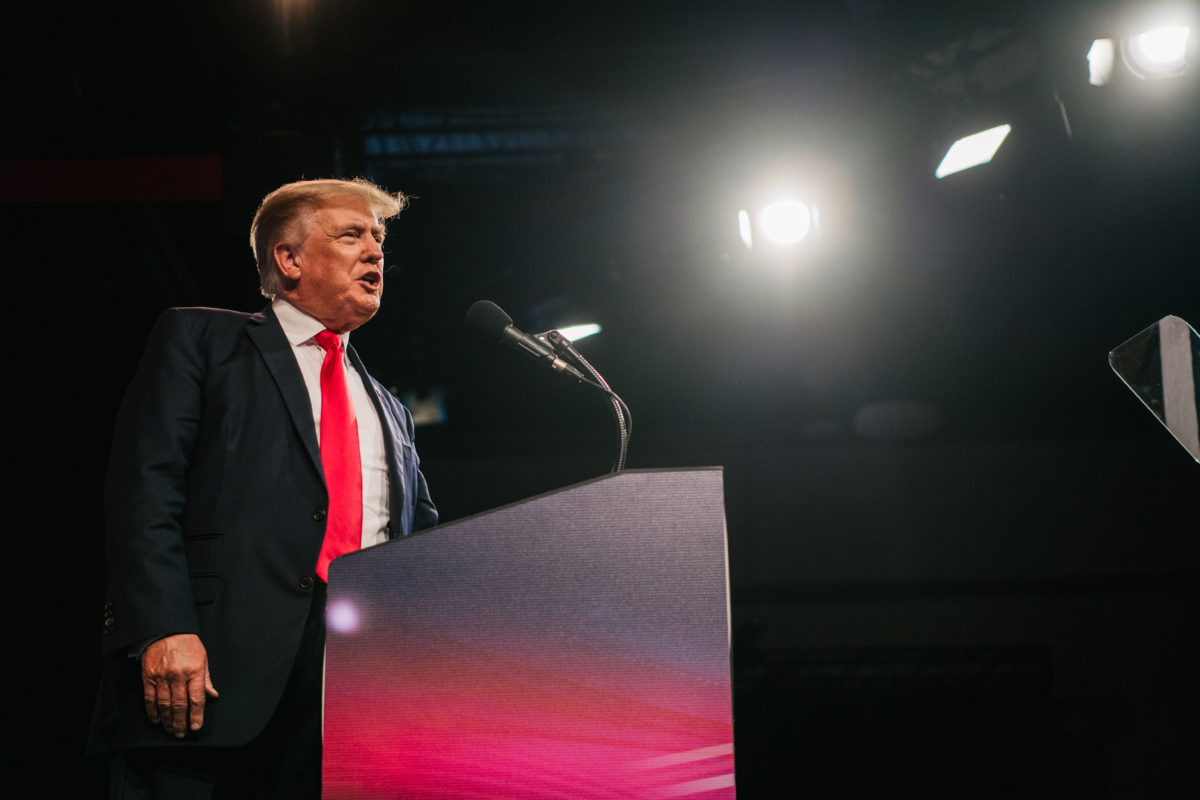 With Donald Trump’s impeachment team in disarray following a rambling introductory speech from one of his top lawyers last February, the embattled former president turned to David Schoen, a reserved Alabama-based attorney who had initially been tapped to lead the defense.

But instead of overseeing the team, Schoen — hired on the recommendation of Roger Stone and tasked with making jurisdictional arguments — was initially sidelined as the trial commenced.

When Trump personally asked Schoen to take over as the trial wrapped up, the apprehensive lawyer shrank from the task, characterizing himself as a “wimp” and a “pushover,” according to Landslide: The Final Days of the Trump Presidency, a damning and richly detailed new book by the journalist Michael Wolff.

Jewish Insider obtained an advance copy of the book, which is published by Henry Holt & Company and will be released on Tuesday.

“You should let Castor do it — he has a whole firm,” Schoen told the former president, referring to Bruce Castor, the Philadelphia lawyer whose 48-minute speech at the beginning of the trial was widely viewed as incomprehensible — including by Trump himself. “It’s just me and my son,” Schoen pleaded.

Trump was nevertheless reassuring, according to Wolff’s account, noting that he had seen Schoen on TV and admired his work. On the first day of the trial, Schoen, an Orthodox Jew who normally wears a yarmulke, had gone viral on social media for the seemingly curious habit of covering his head with his hand while taking sips of water during his opening speech.

The lawyer explained this behavior in an interview with JI after the five-day trial, ending on Feb. 13, in which Trump was ultimately acquitted of inciting an insurrection at the Capitol.

“I was up there and I realized that I didn’t have my yarmulke on,” Schoen said in the mid-February interview. “So I was going to say a bracha, a blessing, before I drank. I wouldn’t say that without my yarmulke on. And I’m not used to eating or drinking without my yarmulke on. So the closest I could come to it was putting my hand over my head to still have a sense of God’s presence over this and sanctifying the drinking and all of that.”

During Trump’s conversation with Schoen, recounted in Landslide, the former president initially tried to boost the confidence of his hand-picked attorney. “You’re a good lawyer,” he told Schoen. “Just do it. Why are you so afraid of Castor?”

While Schoen had initially expressed reservations about joining the defense, according to Landslide, his new admission of weakness did not sit well with the former president, who has historically sought legal guidance from such self-assuredly ruthless lawyers as Roy Cohn. Trump asked Schoen to repeat himself, perhaps incredulous that he had heard correctly.

Schoen hinted at a similar dynamic in the February interview with JI. “I wasn’t assertive,” he said of his experience on the impeachment defense team. “I didn’t tell them — I sort of did, I thought, but anyway they weren’t hearing it that I was supposed to be the lead person — but it’s just not my personality. They have a whole firm there. I’m just not going to say to another person I’m a better lawyer.”

But Trump was unsympathetic to his lawyer’s self-assessment. “A wimp?” Trump said. “You’re supposed to be defending me in an impeachment trial? My lawyer’s a wimp? A wimp? Did you just call yourself a wimp? A wimp? I want you to do it. You do it. Man up.”

The exchange is just one of a litany of shocking revelations in Landslide, Wolff’s third book in a series of colorful Trumpworld exhumations beginning in 2018 with Fire and Fury: Inside the Trump White House.

Wolff’s previous reporting on the Trump administration has drawn scrutiny for some factual inaccuracies as well as unorthodox sourcing techniques. He emphasizes in the introduction to Landslide that the former president’s office was provided with “a detailed summary of much of the material” in the book.

“His staff either confirmed events, conversations, and various details of Trumpworld life as I have portrayed them or offered corrections,” Wolff writes. “In the event that factual matters have been disputed, they have been included only if confirmed by multiple sources.”

After his talk with the former president, Schoen decided that he was going to bail on the trial, uncertain of his ability to deliver convincing remarks with few resources and just a day to prepare, according to Wolff.

Schoen was told firmly he couldn’t leave, and the lawyer ultimately capitulated, delivering his final argument the next day “never having finished writing his own remarks,” Wolff writes acidly. The speech, Wolff says, was prepared by Ory Rinat, a former chief digital officer in the Trump White House described in Landslide as a “videographer.”

Asked for comment on Monday evening, Schoen said he was unfamiliar with the passages from Landslide outlining his experience on Trump’s defense team, adding: “I really don’t want to get into the details.”

“Wolff absolutely did not fact-check with me,” Schoen alleged in an email to JI. “He interviewed me but I did not discuss this with him and he never fact-checked. I would bet I know exactly where this story came from: the same guy who asked me to give Wolff an interview.”

Schoen declined to reveal this person’s name in a follow-up email. “No, but I imagine one day it will come out,” he said. “He and one or two others have been putting some of these stories out to serve their own agenda and it gets very frustrating. Here I have to say I would have thought Wolff would at least have wanted to be accurate. He had full access to me and certainly took advantage of that so it makes no sense to me that he didn’t run these basic facts by me.”

“I have declined to discuss the whole quitting thing each time I have been asked about it,” Schoen added. “The wimp thing came up one other time too. I don’t discuss any conversation I have had with a client so they put me at a bit of a disadvantage when they put out these stories knowing I won’t respond.”

He continued: “I would think anyone who cares to write about this would take at least a minimal amount of time to look into my work, who I have gone up against as a solo practitioner, what change my cases have brought about, the environment I chose to work in for rather difficult cases, the cases that have led to death threats etc., and who my clients have been in order to evaluate whether the issue would have been that I am a wimp.’”

As for the Rinat detail, Schoen was more forthcoming. “Ory Rinat seems like a very nice guy and he is very talented with putting videos together,” Schoen told JI. “He put together videos on subjects that I chose and sent to him. He put together some cue lines for the video presentation I made. By the time they actually had videos together that approached what I had requested on very specific subjects, it was approximately two hours before I had to leave to go to the Senate to present it. Some of the additional subjects still were not covered.”

“Ory had written up a bit of a script — mostly clever cue lines for the videos that were part of what they asked me to consider,” Schoen elaborated. “I had him change the order of some of the videos and then I went to my room and sent him the script I had written overnight for the subjects that were to be reflected in the video in the event he actually was going to be able to put them together in time. He then had to put the script I wrote in a Word document and print it for me to take with me. The final product had some of his cue lines for some videos.”

Here are a few other notable details Wolff dug up in the process of reporting his latest book.

When Trump gave his vice president, Mike Pence, “leadership of the pandemic portfolio,” the former president received advice from a somewhat unexpected source that such delegation threatened to overshadow him, according to Wolff.

“It was one of Trump’s off-book advisors, the secretive Ike Perlmutter, a Palm Beach neighbor, Mar-a-Lago member, and show business billionaire (Perlmutter bought a bankrupt Marvel Comics and sold it to Disney for $4 billion) with whom the president spoke frequently, who advised him to push Pence and the other experts from the stage and get back out there himself. Trump was missing out on ratings gold,” Wolff writes.

Eye on the Middle East

Elsewhere, Wolff discusses Jared Kushner’s effort to distance himself from Trump, his father-in-law, in the administration’s concluding weeks. Kushner, a senior advisor to the president, was busy with, among other things, building on the series of historic agreements between Israel and a number of Arab nations, known as the Abraham Accords, that the Trump administration had helped broker.

“He regarded this effort as his own, quite independent of the president,” Wolff writes.

Trump developed a close relationship with then-Israeli Prime Minister Benjamin Netanyahu, during his time in office. The former president was incensed when Netanyahu offered his congratulations to Joe Biden approximately 12 hours after the election was called in his favor by American media networks. According to Wolff, Trump viewed Netanyahu’s outreach as “an ultimate betrayal.”

“As in all Trump reactions, a variety of grievances welled up here,” Wolff writes. “There was his belief that he had singularly done more for Israel than any American president — and that therefore he was owed. And now sold out.”