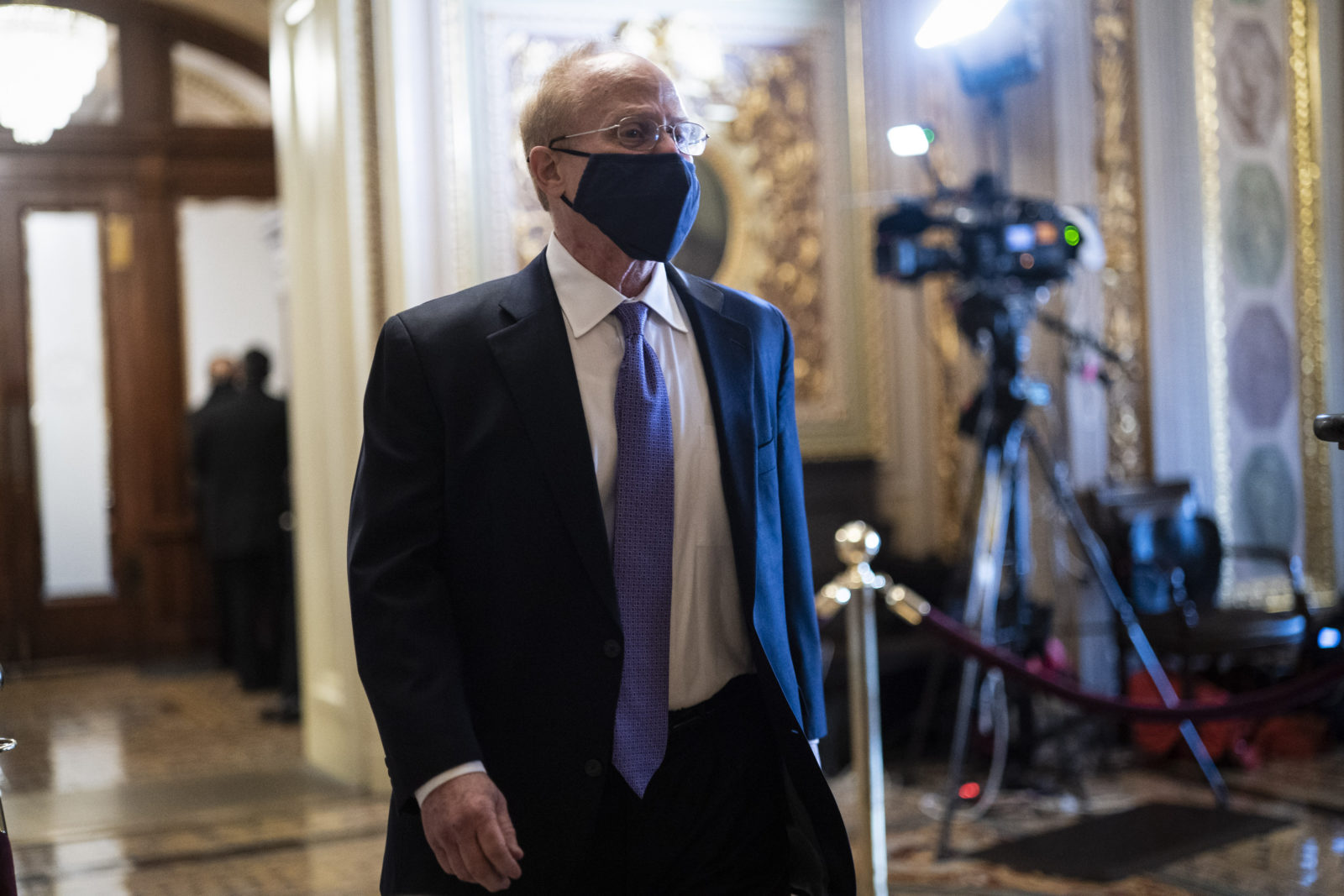 In an interview, Schoen takes JI inside the obstacles that the team encountered and his clashes with Trump’s other lawyers

Despite winning former President Donald Trump an acquittal in his second impeachment trial on Saturday, Trump’s defense team was plagued by inconsistent internal communication and coordination, last minute shake-ups and other management issues, according to attorney David Schoen — who, at least in theory, was the former president’s lead counsel.

Poor communication was a hallmark of the team from the beginning, Schoen explained in an interview with Jewish Insider on Monday.

The lawyer said he was asked to join the team “three or four weeks ago,” and had discussions with the former president over the following days. Soon after, Schoen saw news reports that Trump had hired South Carolina attorney Butch Bowers. Schoen assumed that meant Trump had moved on — until he received a call from a Trump associate that he was still wanted on the team to “quarterback the whole thing” as the lead counsel.

Schoen and Bowers began coordinating, but the last weekend in January while Schoen was offline observing Shabbat, Bowers and his associates abruptly split with Trump. Schoen denied news reports that Bowers and Trump had clashed about strategy. “It wasn’t the right fit,” he explained.

Trump subsequently brought on Bruce Castor and others from his firm to assist Schoen in the case.

Schoen explained that the internal transitions left the lawyers with insufficient time to properly prepare and caused the team’s intended structure to fall apart. Schoen added that the disarray led the attorneys to finalize presentations mid-trial.

“[Trump’s team] asked me if I would work with [Castor], if I would take the lead and so on, but then [Castor] would help me and he has a firm that can help and all that,” the Alabama-based attorney explained. “I’m not sure that message was communicated to him clearly enough, because he never seemed to quite understand that I was supposed to be the lead in the case.”

“He got into the case and started giving out parts on who’s going to do what,” Schoen said. Castor’s agenda, Schoen added, “was kind of based around giving him and his partner [attorney Michael Van Der Veen] leading speaking roles,” leaving Schoen to handle the argument over the Senate’s jurisdiction.

With Schoen focusing on jurisdictional arguments, his role was largely set to end after the first day of the trial. But Trump requested that he speak again.

“I just wrote up my own talk for jurisdiction, and that was going to be my little piece… but that wasn’t really coordinated with the president,” Schoen said. “The president had this other idea that he wanted me to speak more. He said, ‘I’ve made you the lead person. Why is it that you’re only doing that one part?’”

The attorney explained that Castor and his associates largely ignored him when he tried to assert himself as the lead counsel, but also blamed himself for not being more assertive.

“I wasn’t assertive. I didn’t tell them — I sort of did, I thought, but anyway they weren’t hearing it that I was supposed to be the lead person — but it’s just not my personality,” he explained. “They have a whole firm there. I’m just not going to say to another person I’m a better lawyer.”

Trump’s legal defense got off to a rocky start on Tuesday with a speech by Castor that was maligned by many, including a number of the former president’s closest allies. That speech was a “spur of the moment decision,” Schoen explained — Schoen himself was originally scheduled to deliver the opening argument.

“The House put on a pretty good presentation. [Castor] seemed to think he was the best lawyer on the team, or something. So he stood up and said, ‘I think I better jump in here,’” Schoen recounted. “He jumped in and obviously it was like a filibuster. It was not a good presentation.”

“I tried to back Castor up because everybody was coming down on him after that first performance. I thought, ‘This guy’s career is going to disappear,’” Schoen added. “But he didn’t… He still thought he did a good job.”

The New York Times reported last week that Schoen briefly quit the team the Thursday of the trial, which he disputes.

“Since the president insisted that I speak again, I came up with a program for [Friday,] the last day when I would be there. And it was just a matter of whether that could be organized in time. And if it couldn’t, then I couldn’t really play any meaningful role,” he said. “But it turned out they got it organized in time. So that was all that was.”

Schoen told JI he stayed up through the night and did not finish his remarks until an hour before he delivered them to the Senate.

He only became familiar with one of his main talking points — that the Democratic impeachment managers and the media had misrepresented Trump’s comments about the Unite the Right rally in Charlottesville — while preparing his speech.

“I learned preparing this thing for that day — I really learned the day before, maybe even the morning of my talk — that it’s a much longer speech. He actually affirmatively denounced white supremacists, white nationalists and all of that a couple of times during his talk,” Schoen said. Until that point, he said, he had been dissatisfied with Trump’s response to Charlottesville.

In Schoen’s view, Trump’s efforts to overturn the election results were largely incidental to the January 6 riot.

“January 6, I think, was put out there as a date which is something significant with respect to the election and the country and all of that. I think what is most likely is these folks, the violent folks, also focused on January 6 as sort of a defining date, but had their own agenda,” he said. “I don’t think their agenda had anything to do with appearing with all of the much larger group to hear President Trump’s speech. I think they were maybe opportunistic, on that day, and that day was kind of a central day put out there.”

The Senate voted to acquit Trump by a vote of 57-43 — a lower number of acquittal votes than Schoen had expected, which he blamed partly on the defense team’s performance during the question and answer session on Friday.

“I was pretty confident based on discussions with the senators… that we would have something like 45 or 46 votes,” he said. “Before Shabbos, I heard like two of the Q&As. I didn’t think that our side answered the questions the way they should have been answered. That might have had some influence.”

Schoen specifically mentioned Sens. Susan Collins (R-ME) and Lisa Murkowski (R-AK), who both voted to convict Trump. The senators asked Trump’s defense team for details about when Trump learned of the Capitol breach and what he did in response —  questions the Trump team did not answer specifically.

He also broke with Van Der Veen, his co-counsel, who described the trial as his “worst experience in Washington.”

“I found it really inspiring. I love that place,” Schoen said. “I got to know some of the senators — at least on the Republican side… They were just very friendly and warm. But I really felt like it was a very weighty experience.”

Schoen involved his wife and children in his preparation process, making it a “civics experience” for his entire family.

On the first day of the trial, Schoen went viral on Twitter for covering his head with his hand while taking swigs of water during his speech. The Orthodox Jewish attorney explained that he usually does not wear a yarmulke or drink water during trials, but was feeling thirsty due to a recent bout with COVID-19.

“I was up there and I realized that I didn’t have my yarmulke on. So I was going to say a bracha, a blessing, before I drank. I wouldn’t say that without my yarmulke on. And I’m not used to eating or drinking without my yarmulke on,” Schoen said. “So the closest I could come to it was putting my hand over my head to still have a sense of God’s presence over this and sanctifying the drinking and all of that.”

Schoen added that “seeing the posts online afterwards made me feel really awkward and kind of embarrassed.”

Although some eagle-eyed viewers spotted Schoen wearing a yarmulke at points during other days of the trial, the attorney explained that he had forgotten to take it off when he entered the Senate chamber, and later did so.

Schoen was not concerned for his safety, even after, mid-trial, a vandal spray painted “traitor” on Van Der Veen’s driveway.

“It’s not nice and all that, but when I heard the news report, I was thinking they must have broken into the guy’s house,” he said. “A crazy guy can do anything at any point. But listen, I’ve been a civil rights lawyer 36 years in Alabama. When I lived there, I lived behind an electric fence. I have two German shepherds and I carry a gun. I was always very aware of threats then, I got many death threats all the time.”

And despite Trump’s reputation for failing to pay his lawyers, Schoen has no complaints about his interactions with Trump, describing him as “gracious to me at all times.”

“I don’t really like to discuss that kind of thing,” he said, when asked if Trump had paid him yet. “But I will say that he absolutely fulfilled every commitment made to me.”