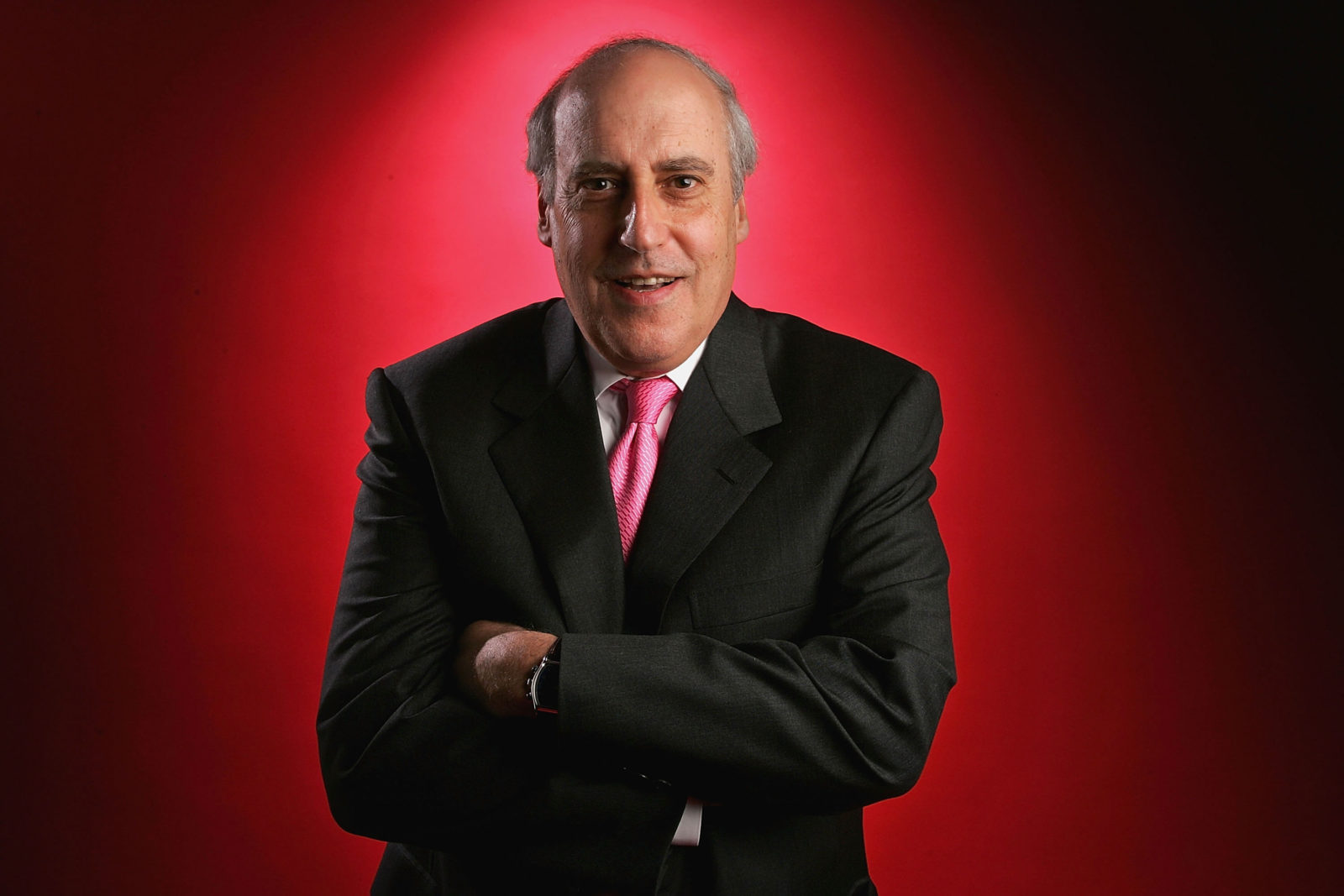 The funnier, happier glory days of politics, according to an insider who lived it

When Dan Glickman’s grandparents arrived in the U.S. from Eastern Europe, how did they get to Wichita, Kansas?

That’s a joke — the first line of defense for Glickman, a former nine-term Kansas congressman, agriculture secretary and head of the Motion Picture Association. “We’ve become kind of a humorless society,” he told Jewish Insider. “Politically, it’s just much harder to have fun. Self-deprecating humor helped me a lot through the ups and downs of my life.” (In reality, the joke’s punchline is mostly true; his grandparents boarded a train in Boston and decided to get off in Wichita.)

In a new book Laughing at Myself: My Education in Congress, on the Farm, and at the Movies, Glickman looks back at his decades of service in what he now feels was a very different era in American politics, one with, he explained, less money and partisanship, and more humor.

Glickman, a Democrat, represented Kansas’s 4th Congressional District in the House of Representatives from 1977 to 1995 — his “best job” — until losing in the “Gingrich Revolution” that took place in the midterm elections during President Bill Clinton’s first term. He attributes today’s polarization in Washington to two things: “Socialization was different back then. Members and their families lived in Washington,” said Glickman. “Another difference, of course, is money in politics, the metastasis of money.”

As a Democrat who represented a mixed urban-rural district in a red state, Glickman was not a party-line legislator. Everything about his career in Congress is a bit of a throwback, which he acknowledges. “I could afford to be independent. I didn’t follow my party’s lead all the time, when I thought it was inconsistent with my congressional district. That’s hard to do today,” he explained.

Growing up, Glickman’s family was active in Wichita’s small Jewish community of some 300 families. After arriving from Belarus, his grandfather joined the scrap metal industry, which Glickman said was an “exclusively Jewish industry” at the time. His family belonged to the local Reform temple, one of two synagogues in town — “or as my dad would say, the synagogue that we went to and the synagogue nobody would go to,” Glickman joked.

Glickman grew up without any significant partisan affiliation, although he noted that his parents always voted and followed politics. “They were interested in politics, but not ideological,” he noted. He was class president in the sixth grade; after graduating from law school, he worked for a Republican senator in Washington. “I always knew I wanted to be in politics. I went back to Kansas probably with that in mind,” he told JI.

Before running for Congress, Glickman served on his local school board, though when he ran for the position he was so young that his children were not yet of school age. He said his age contributed to his decision to run for Congress, too. “Being young had a lot to do with my initial political process because when you’re young, you don’t analyze it quite as carefully,” he explained. “This was a different era. I didn’t have 1,000 consultants, and I wasn’t raising money every second. It was more of instinct that I said, ‘You know, I think I can win this race.’”

When he arrived in Washington, Glickman did not have a singular priority. As a Kansan, he always focused on agriculture and food — rural voters helped elect him in his race against an incumbent Republican — but he also served on several other committees over the years, including a stint as chairman of the House Intelligence Committee. “I had an eclectic interest in just about everything that came down the pike,” he stated.

Glickman suggested that legislative priorities have changed over the years, pointing out that while individual members have their focus areas, they rarely deviate from the party’s top issues. “I never considered the speaker of the House to be my boss,” said Glickman. Much of that, he said, comes down to the massive amounts of money that candidates must raise now, and the nonstop campaigning that dominates their time in office. “Whereas I ran for $100,000 in my first congressional race,” Glickman explained, “today, you’d have to raise $100,000 a day, probably, in a competitive race, or thereabouts. That changes the culture of the job and it becomes less focused on substantive issues.”

Now, he sees one kindred spirit on Capitol Hill: “ I have some sympathy with [Democratic West Virginia Sen.] Joe Manchin. I don’t know all the issues he’s dealing with, but it’s so hard to be an independent force in politics today,” said Glickman. “Being in the middle of the road was politically sensible for me. Today, being in the middle of the road is often a disaster politically.”

U.S.-Israel relations had not been a priority for Glickman during his time on Capitol Hill, though he wrote in his book that “support for Israel had always been part of [my] Jewish tradition.”

In one way, Israel did play a role in Glickman’s decision-making: He once considered mounting a challenge to then-Sen. Bob Dole, a Republican who, years later, would go on to be the party’s nominee for vice president. “I remember a lot of the AIPAC folks used to come to me and say, ‘No, you can’t do that, Dole is too supportive,’ even though I was fully supportive of Israel and worked on Soviet Jewish immigration, and those issues, and met with a lot of Refuseniks,” said Glickman.

Glickman decided not to challenge Dole, which proved useful to getting him another job down the road. After Glickman lost his bid for a 10th term in 1994, he flew to Los Angeles for a job interview with Disney. Upon landing in California, he received a call from his wife. “She said, ‘Leon Panetta wants to talk to you,’” he recalled. At the time, Panetta was then-President Bill Clinton’s chief of staff, but Glickman knew him well; they were elected to Congress the same year. Panetta asked Glickman to join the administration as secretary of agriculture, after the previous secretary left due to an ethics scandal.

To get the job, Glickman had to be approved by the Senate, which was in Republican hands after GOP candidates picked up eight Senate seats. But the majority leader was Bob Dole, a fellow Kansan. He helped usher Glickman’s nomination through the Senate. “Can you imagine that, the leader of one party talking to the president of the other party, about recommending somebody in the Cabinet posts, and the president would go along with it? It just doesn’t happen,” said Glickman.

His most consequential — or, more accurately, almost-consequential — moment as agriculture secretary came when he served as the “designated survivor” during Clinton’s 1997 State of the Union address, during which time he went, accompanied by Secret Service, to New York to visit his daughter. (Prior to the Sept. 11 attacks, designated survivors were not obligated to stay in Washington.)

“I was honored to be selected,” Glickman wrote, “but if I am completely honest, there was the tiniest voice in the back of my head thinking something altogether unexpected. God forbid it happens; I could be the first Jewish president of the United States!” His wife talked him out of his “delusions of grandeur,” he noted.

After six years in Clinton’s Cabinet, Glickman left the White House but continued to work in politics and policy. He spent time at Harvard, running its Institute of Politics, before becoming chairman and CEO of the Motion Picture Association of America, Hollywood’s main lobbying group, after the organization’s longtime leader Jack Valenti told a headhunter that Glickman was his preferred candidate. It was an unexpected next move for a former agriculture secretary. “I’d say, ‘Well, in my days in agriculture, I grew popcorn, and now I sell popcorn,’” he recalled. “Half jokingly, it’s just a saying, but it was a big jump from agriculture into the movies.”

It was mostly a lobbying position, and he frequently disappointed friends who assumed he spent his days with actors. But if he didn’t spend all day long with Hollywood celebrities, he cavorted with famous political figures instead.

“As secretary of agriculture, I could usually see ministers of agriculture around the world, but rarely see heads of state. As head of the movie industry, I could see a head of state almost anywhere that I would go, if I needed to,” he said. “Entertainment just kind of has a power that none of the other areas had, at least globally.”

Working in the movie business “got me the most access,” Glickman said. But nearly three decades after he was voted out of office, “I always think that the best job was being a congressman.”