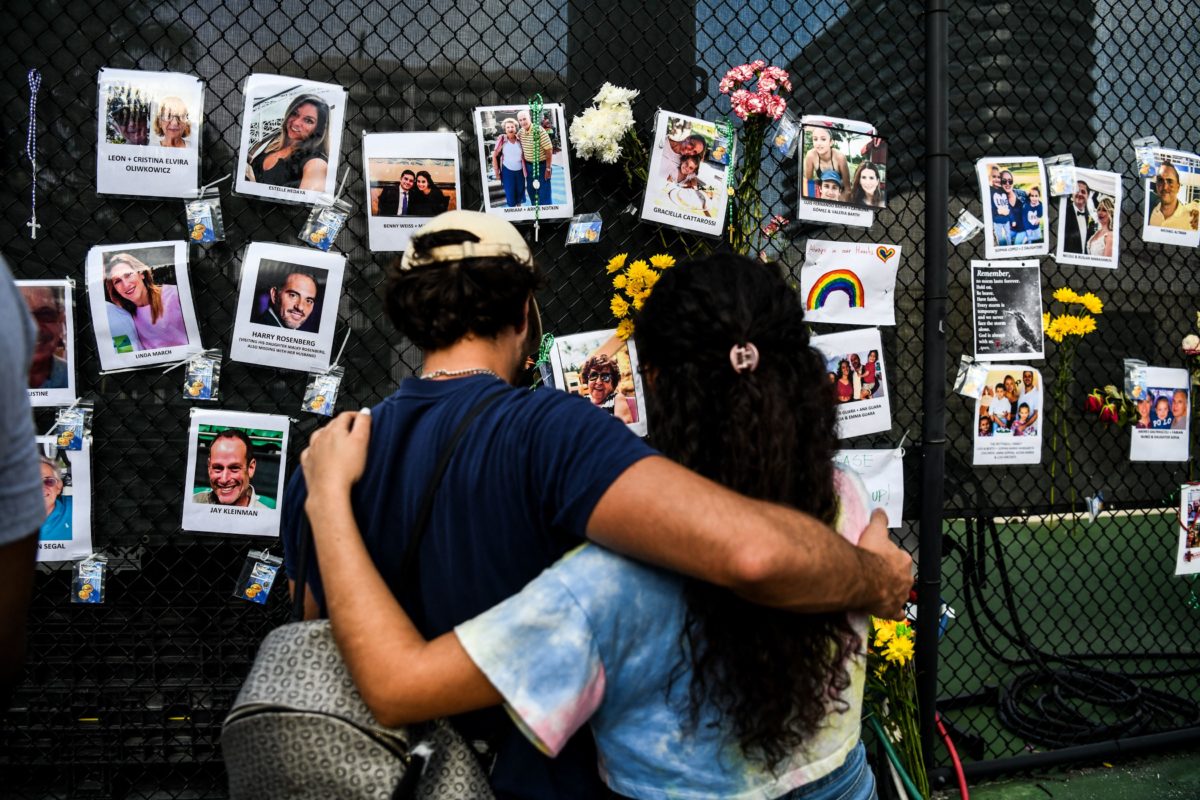 People visit the makeshift memorial for the victims of the building collapse, near the site of the accident in Surfside, Florida, north of Miami Beach on June 27, 2021.

In his first international trip as Israel’s minister of diaspora affairs, Nachman Shai arrived early Sunday morning in Surfside, Fla., as part of a joint delegation with Israel’s foreign affairs and defense ministries to help with relief efforts following the collapse of a condominium.

“There’s a message here that I believe should be delivered, that when you’re in trouble, we are there to help,” Shai told Jewish Insider in an interview on Sunday night. “When we are in trouble, you are coming to help us. I remember that every single opportunity that is needed any assistance, any help from the United States with any administration — by the way, Republican, Democrats, in general — you’re always there for us.”

The delegation was organized at the urging of Israeli Prime Minister Naftali Bennett following the collapse of the oceanfront condominium in the heavily Jewish area north of Miami Beach. “He called me a few times since [Friday], to make sure that I’m going, that I know what to say, that I know what message I’m going to carry,” Shai said. “It seems like he’s really interested in this trip.”

Shai met yesterday with public officials including Florida Governor Ron DeSantis, Sen. Rick Scott (R-FL) and Miami-Dade Mayor Daniella Levine Cava, as well as leaders from the Miami Jewish community. He plans to stay in Florida until Tuesday and will meet with Sen. Marco Rubio (R-FL) and additional Jewish organizations.

A team of engineering and rescue specialists from the IDF went directly to the disaster site. One member of the IDF crew answered questions from people whose family members remain unaccounted for. “They feel helpless. Our representative, one of the rescue team, came also, though, to talk to them. He told them, first of all, he said that the Americans are doing their best,” Shai recalled. He did not address the families as a group, though he has spoken to some individually. “If it comes from a politician’s mouth, it’s one thing. When it comes from professionals, it’s a different thing.”

The Israeli search-and-rescue team explained to the families that while the likely outcome was grim, there have been past instances in which survivors have been found days after a disaster. “He told them that… there were two or three cases that people were found after four days — so they should give it a chance, that they shouldn’t lose hope,” said Shai.

Contrary to earlier news reports, Shai told JI that there are not believed to be any Israeli citizens among the dead or missing. But as many as 40 Jews are among the more than 150 people that are missing or dead. Soon after arriving, Shai visited the scene where many Jewish families had gathered, and prayed with them.

In the past, Israel had relied on the assistance of Jewish communities around the world during times of crisis. “That world has changed,” said Shai. Now, Israel is “relatively safe, and much less dependent on world Jewry. So it’s now time for us to give, not only to get.”

The trip to Florida was Shai’s first abroad in his position, which he began two weeks ago after a coalition led by Bennett and Yesh Atid leader Yair Lapid ousted former Prime Minister Benjamin Netanyahu after 12 years in power. Some Jewish organizations in the U.S. have expressed hope that a government led by Bennett, who also once served as diaspora minister, could forge better relationships with all Jews around the world.

Shai has already prioritized recognizing and respecting non-Orthodox forms of Judaism. Reform Judaism is “not in the back any longer,” said Shai. “All three denominations are accepted and recognized by the State of Israel, but now for a change the full spectrum is equal.”

Still, he had hoped to begin his position in Jerusalem, to better get to know the role and the organization. “I wanted to stay in the country for at least three, four months, to learn the ministry,” said Shai, before adding: “No one knows the Jewish world. It’s so complicated and big. But I know. I’ve been to many places in my previous capacity.”

He spent the last two years teaching at Emory University and Duke University, living in Atlanta and Durham, N.C.; before that he served in the Knesset for 10 years representing various iterations of the Labor party. Earlier in his career he served as an IDF spokesperson, and worked for a time at the United Jewish Communities, the predecessor to Jewish Federations of North America.

Shai may have knowledge of Jewish life outside of Israel, but he is aware that many Israelis don’t.

“The challenge,” Shai explained, “is, how do you convince the Israelis that the diaspora or the Jews living out of the country are relevant to them, they are part of the integral part of their life, that whatever happens here is our business? That we have to think about world Jewry with whatever we do?”

He pointed to Israel’s recent war with Hamas as an example. “Antisemitism depends very much on the relationship between us and the diaspora,” said Shai. “We should be aware that when we hit — I will say I don’t like it — but when the Israeli Air Force targets Hamas targets in Gaza, that has implications on other fronts, and Jews sometimes pay for it because they live all around the globe.”