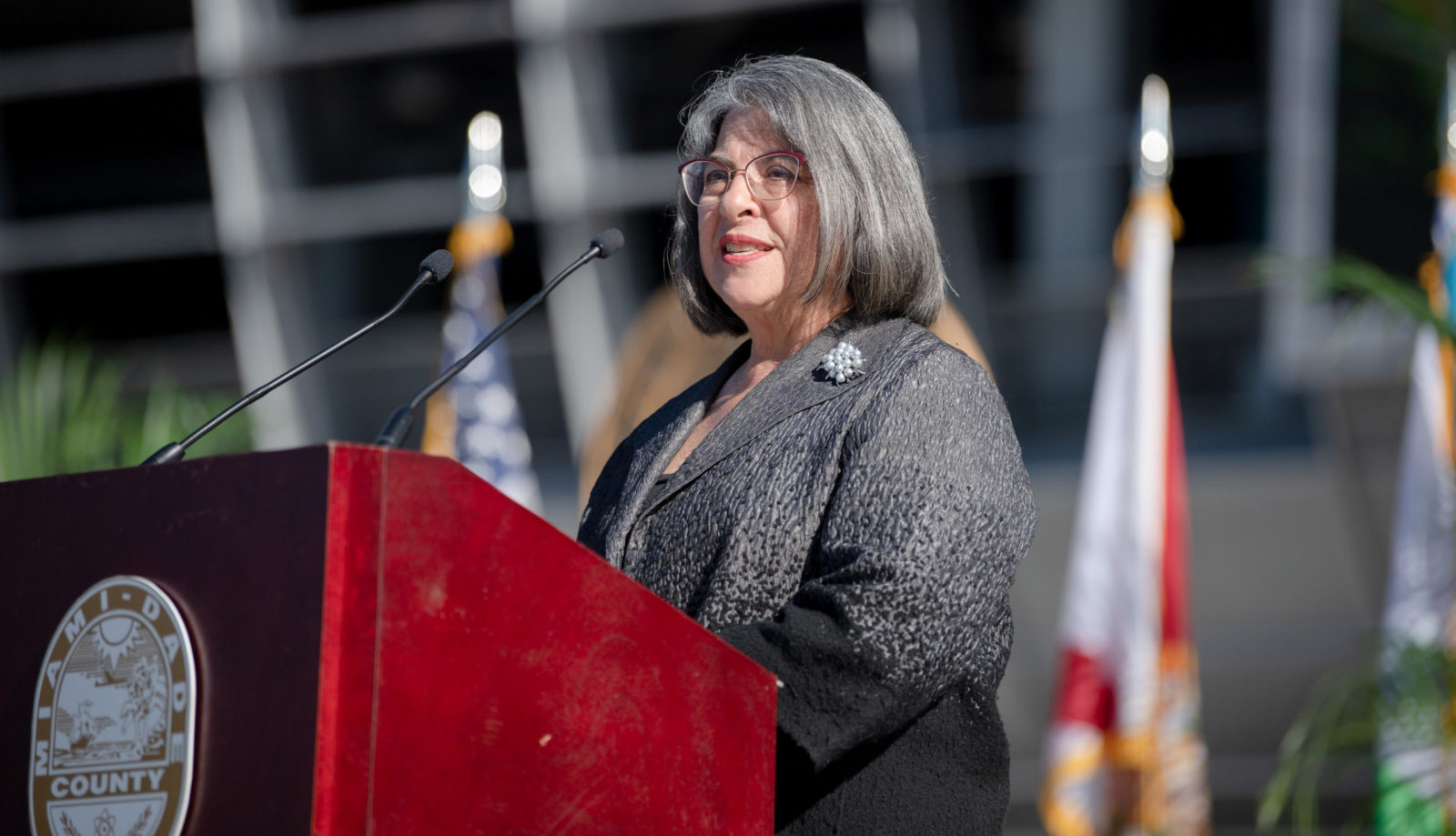 Daniella Levine Cava cleared an array of hurdles when she was elected mayor of Miami-Dade County in November, becoming the first woman as well as the first Jew ever to hold the job. Another landmark: though the position is nonpartisan — meaning candidates don’t run with any official party affiliation — Levine Cava, a 65-year-old former lawyer and social worker, is the first Democrat to claim the office since 2004.

“I am very proud to be the first woman mayor,” Levine Cava said in a recent interview with Jewish Insider. “I’m surprised there has not been one before. But it just seems very natural and normal to be here. As far as being the first Jewish person to hold the post, we have a very strong Jewish community in Miami-Dade County, and circumstance would have it that this is my fate.”

But her victory wasn’t determined by chance alone. Perhaps the most formidable obstacle Levine Cava overcame was one that a number of other Democratic candidates in South Florida failed to surmount. This past cycle, former Reps. Donna Shalala (D-FL) and Debbie Mucarsel-Powell (D-FL), who represented swing districts in Miami-Dade, Florida’s most populous county, were both defeated by Republican challengers whose efforts to paint their opponents as socialists appeared to resonate with Cuban-American voters. President Joe Biden was also believed to have underperformed in the county for similar reasons.

Levine Cava, however, was unaffected by the GOP campaign to tarnish Democrats as radical leftists, even as her Republican opponent, former county commissioner Esteban Bovo, Jr., tried to brand her as one. “But it didn’t work for the traditional Democratic constituency in this county,” said Eduardo Gamarra, director of the Latino Public Opinion Forum at Florida International University in Miami.

“My campaign was truly about listening to people, caring about their concerns, focusing on basic quality-of-life issues as I’ve done my whole life,” said Levine Cava, who worked in child welfare and founded a Miami-based nonprofit before she entered politics as a county commissioner seven years ago. “I think people really related to that and really didn’t care about the accusations that maybe I was going to defund police or something — which I, of course, wasn’t. There were a lot of lies that just didn’t stick with the public because they already had a relationship with me or had learned about me through the campaign.”

That Levine Cava speaks “passable Spanish,” in her words, also didn’t hurt her prospects in the majority-Hispanic county, where she beat her opponent by a margin of 8 points with 54% of the vote. She succeeds Republican Carlos A. Giménez, who was elected to Congress in November in Florida’s 26th congressional district.

Ron Klein, a former Florida congressman who chairs the Jewish Democratic Council of America, said the newly elected mayor is an “authentic” leader whose campaign message carried broad appeal in a charged political atmosphere exacerbated by the pandemic. “She was probably the right person for the right time,” he told JI. “She wasn’t making up a story. It was her.”

Levine Cava was born in New York City but moved around frequently throughout her childhood because of her father’s work in international business. She lived in Vancouver, Rio de Janeiro, Santiago, Chicago and Brooklyn, where she completed high school. Her childhood, she recalled, was enriched by an early exposure to the arts. Her maternal grandfather, a lawyer and businessman, was active in the America-Israel Cultural Foundation, which sponsored Jewish artists like Jascha Heifetz, Yaacov Agam and Itzhak Perlman.

“These are all people that I met through my grandfather when I was young, which was exciting,” she said.

She settled in South Florida 40 years ago with her husband, Robert Cava, a physician and native of the Sunshine State. “I’m what they call an imported talent,” Levine Cava quipped. She worked in state social services and established a nonprofit now known as Catalyst Miami that is dedicated to serving low-income families. In 2014, Levine Cava became a county commissioner after nearly 20 years as a nonprofit leader.

Ashley Walker, a partner at Mercury Public Affairs who ran former President Barack Obama’s reelection campaign in Florida, described Levine Cava as a “very principled” politician whose “track record of serving the Miami-Dade community” put her in good standing with voters. “She’s very down to earth and I think that’s part of why she resonates.”

As mayor, Levine Cava’s immediate goal is to help the county get past the pandemic, which has gutted the travel industry as cases in Florida continue to rise. “We live in paradise,” she said. “We have many people moving here, which is a great boon to us. People want to visit, and so we are going to be working as hard as ever to make sure that we build back better.”

Levine Cava contracted COVID-19 in late November just two weeks after assuming office — an inauspicious start to her first term in office but one she took in stride. Her symptoms were mild, she told JI, but she still suffers from some lingering congestive issues. “It’s very sobering,” she said. “I worked throughout the time virtually, and was able to spend a lot of time communicating with the public about the disease and my own experience as well.”

From a long-term perspective, Levine Cava’s priorities include preparing for climate change, which she describes as an “existential threat,” improving transit and increasing access to affordable housing. Levine Cava has moved quickly since taking office, appointing a chief bay officer and establishing offices for innovation and policy. She is also currently on the lookout for new transportation and water and sewer directors — and is looking at launching initiatives around equity and inclusion as well as criminal justice reform.

The mayor’s policy-driven approach was evident during her campaign, according to Justin Day, a Democratic strategist in Florida. “I think the average Miami-Dade citizen wanted to get past partisan divides and gridlock,” he said, “and the mayor spent her time focusing on how she was going to address challenges with local solutions.”

Ron Book, a powerful Florida lobbyist who chairs the Miami-Dade County Homeless Trust, told JI that he was immediately impressed by the speed with which the new mayor got to work. “I can tell you that within 18 hours of her election as mayor-elect she had already reached out to me to have a planning session about what we were going to do related to the impending end of the eviction and foreclosure moratorium,” he told JI. “I’ve had no fewer than a dozen calls with her and Zoom meetings to deal with that.”

“That a mayor-elect makes that a first issue to deal with hours after becoming the mayor-elect speaks volumes about what kind of person she is and how she will lead,” Book added. “And while I think a lot of people labeled her during the campaign as a progressive, to me, I label her as a compassionate, caring leader where people that are least fortunate, where people who are in need, have someone who will use their voice on their behalf.”

Levine Cava is only the second Jewish county mayor in all of Florida, according to Marcia Jo Zerivitz, the author of Jews of Florida: Centuries of Stories. It is a distinction that Jewish community leaders in the state view as a significant milestone. Susan Gladstone Pasternack, executive director of the Jewish Museum of Florida-FIU, said she was “very proud” of Levine Cava’s achievement. The museum “highlights the 250 years of accomplishments of Jewish residents of the state of Florida,” she added, “and we are very pleased to add this historic win to our distinguished timeline.”

“As someone else who achieved a historic first, Mayor Levine Cava’s victory means so much,” Nikki Fried, the first Jewish woman ever to be elected to statewide office in Florida as agriculture commissioner, told JI. “She’s leading the way for others, showing the Jewish community and little girls everywhere that it’s possible to break these ceilings. Mayor Levine Cava has been doing a great job, and her work is allowing people to see themselves reflected in positions of power.”

Samuel Edelman, an adjunct professor in the department of Judaic studies at the University of Miami and previously a dean at American Jewish University in Los Angeles, said that Levine Cava’s win is encouraging even at a moment when antisemitism is on the rise.

“It still shows that the Jewish community is in a central place in American society that a person of her stature would be elected as mayor — and she’s also Jewish,” he said. “That’s a very important mark that we all should recognize.”

Levine Cava, a member of Beth David Congregation, said she feels a strong connection to her faith. “It has continued to be a meaningful part of my life,” she told JI, adding that she and her husband became more deeply involved with attending synagogue after their children left home. “We started to study Torah,” Levine Cava said.

“I’m very spiritual in my faith,” she said, emphasizing her affinity for Jewish values and traditions. Asked to name her favorite Jewish food destinations in the county, she chuckled and rattled off a list of places including Lots of Lox in Miami (“near my house”), Mo’s Bagels and Deli in Aventura (“a great destination”) and the Bagel Emporium in Coral Gables (“also very good”).

She has visited Israel three times and says she maintains good relationships with the Israeli Consulate in Miami. As a former county commissioner representing a constituency including farmers, Levine Cava said she worked to facilitate agricultural partnerships with Israel. “I was very interested in how we could work together on innovations in farming as well on water technology,” she said.

Such initiatives extend beyond her time as an elected official. Henry Green, a professor of religious studies at the University of Miami, brought Levine Cava and her husband to Israel in 2007 through an organization he runs called Sephardi Voices. “They got a strong sense in one week of what Israel was about,” Green said.

The following year, Green established an American arm of the Israeli educational program known as HIPPY, and asked Levine Cava if she was interested in a partnership. “She was very, very supportive of this because her programs were always based on inclusiveness and diversity,” Green said.

For Levine Cava, that approach is of a piece with her decades-long tenure in social work, nonprofits and public service — experiences that, she believes, convinced voters to give her a chance at a pivotal moment in Miami-Dade County history.

“This has been the focus of my career,” she said, “to lift up communities that are left behind.”