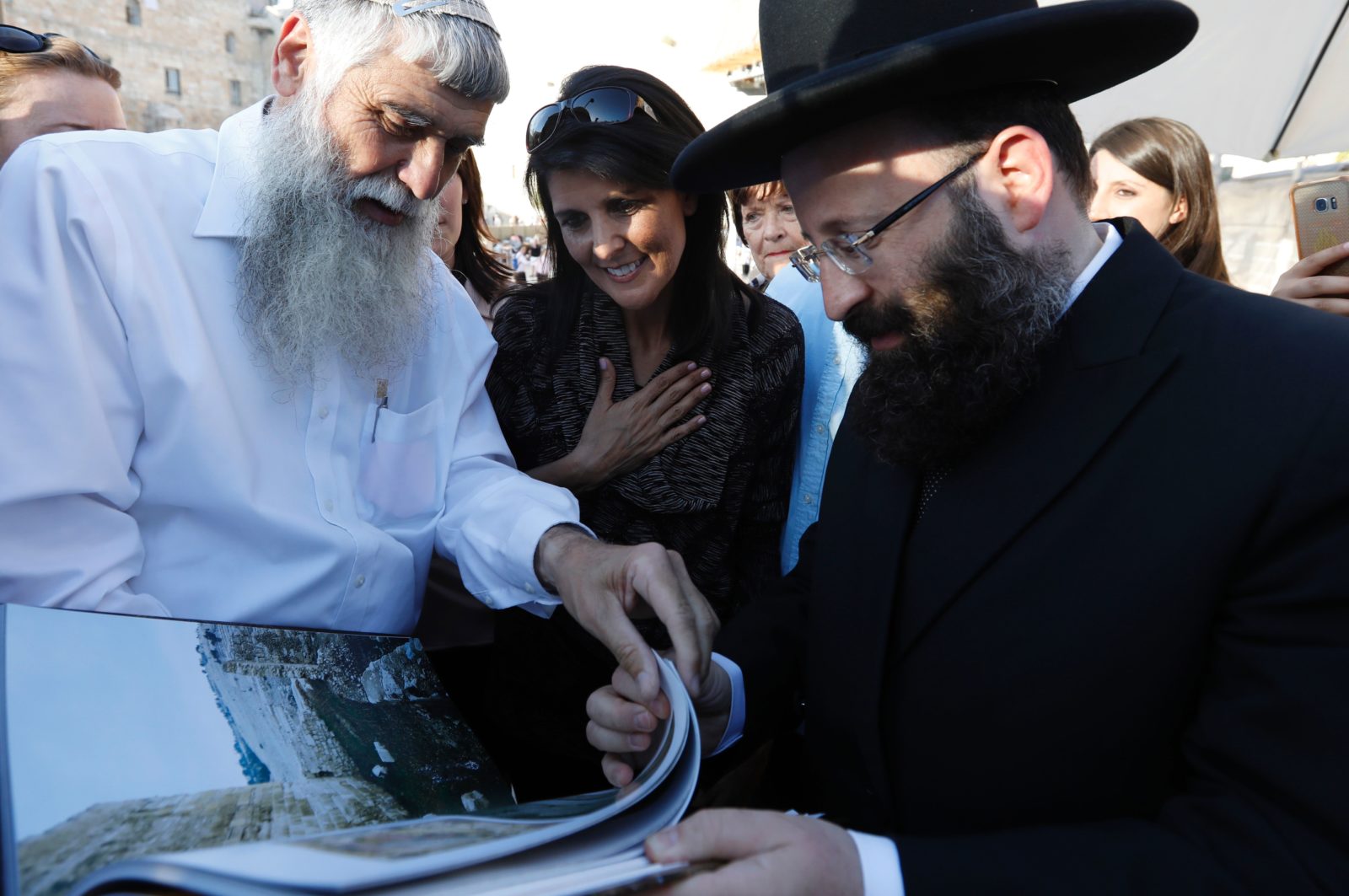 For GOP hopefuls, Israel is the new Iowa

After the recent round of intense fighting between Israel and Hamas, several Republican politicians have visited Israel or announced plans to do so. One of the first to announce travel plans was Indiana Gov. Eric Holcomb, who arrived in Israel days after a cease-fire was announced. Sens. Ted Cruz (R-TX), Bill Hagerty (R-TN) and Lindsey Graham (R-SC) visited on official congressional delegations. Former Secretary of State Mike Pompeo traveled to Israel last week for a goodbye party for the head of Mossad and former U.S. Ambassador to the U.N. Nikki Haley announced plans to visit with a Christians United for Israel delegation — even though neither of them currently holds public office.

It’s still two and a half years before any voters will head to the polls for the 2024 primaries, but potential candidates — like Cruz, Pompeo and Haley, who are all seen as likely 2024 Republican presidential contenders — are often trying to position themselves for the next race. Pompeo, for instance, was spotted in Iowa in March.

“I think for Republicans in particular, visiting Israel and being supportive of Israel has now become a requirement,” said Elliott Abrams, currently a senior fellow at the Center on Foreign Relations who served in diplomatic roles in the administrations of Ronald Reagan, George W. Bush and Trump.

But Abrams notes that politicians’ visits to Israel are not a new phenomenon, even if they have increased in recent years. “This is not new, and I think it’s particularly unsurprising right now, because you’ve got political change happening in Israel, because you just had a war, because you have a new American president who’s just setting his policy toward Israel and the Middle East. So it strikes me as pretty normal and predictable.”

Jewish Insider reached out to nearly a dozen Republicans who are considered to be potential 2024 contenders to see whether any of them have plans to visit Israel in the near future. Florida Gov. Ron DeSantis, Sen. Tom Cotton (R-AR), Sen. Rick Scott (R-FL) and former New Jersey Gov. Chris Christie told JI that they have no such plans, though all of them have traveled to Israel in the past.

Presidential candidates have a history of traveling to Israel while campaigning, although such visits usually occur much closer to an election. The late Sen. John McCain (R-AZ) toured Israel on a Senate “fact-finding” delegation in March 2008 during the Republican primaries. A few months later, after clinching the Democratic nomination, Barack Obama visited the country for the first time. Now-Sen. Mitt Romney (R-UT), the Republican who ran against Obama four years later, visited Israel in July 2012. Trump was scheduled to travel to Israel as a candidate in 2015, but canceled the trip after Israeli Prime Minister Benjamin Netanyahu publicly criticized Trump’s campaign pledge to ban Muslims from entering the U.S.

President Joe Biden did not travel internationally during the 2020 campaign — most of his general election campaigning took place virtually due to the COVID-19 pandemic — but he has visited the country on several other occasions, including several times as vice president.

Many lawmakers from both parties have visited Israel on congressional delegations or on biennial trips for freshman lawmakers run by the AIPAC-affiliated American Israel Education Foundation. Pressure from other pro-Israel groups has also highlighted the political importance of these trips. “I think that as America’s strongest ally in the region and one of our closest allies in the world, elected officials who are able should make an effort to visit Israel,” Pastor John Hagee, the founder and chairman of CUFI, told JI.

Republican visits to Israel might also be linked to the 2022 midterms, when Republicans will seek to regain control of the House and Senate. “It’s going to be very important for the Republicans to recapture both houses of Congress in 2022,” said Marc Zell, an American attorney who lives in Israel and is the chairman of the Israel chapter of Republicans Abroad. “I think we have a really good chance of doing that, and Israel is part of the formula that many candidates will adopt as they prepare for 2022.”

Support for the U.S.-Israel alliance has become a key tenet of Republican campaigns at both the federal and state levels in recent years. “As a state governor, Gov. DeSantis is not in the same position to enact foreign policy as, say, U.S. senators,” his press secretary, Christina Pushaw, told JI, but she noted that his “first trip abroad as governor, in 2019, was to Israel for a historic business-development mission to promote stronger ties between Florida and Israel.”

One thing that has changed in recent years is the growing affinity between Republican lawmakers and Netanyahu, who has cultivated close relationships with Republicans in the U.S. Netanyahu welcomed Trump to Israel in May 2017 on the president’s first foreign trip while in office, and in early 2020, Netanyahu referred to Trump as “the greatest friend that Israel has ever had in the White House.”

With a new Israeli coalition set to take control from Netanyahu in the Knesset, Zell suggested that Republican support for the country might falter. Mike Evans, a prominent evangelical Christian, said at a Monday press conference that his followers would “go into the opposition” with Netanyahu rather than support Israel’s potential new government.

“I’m not sure that we’re going to be seeing the same frequency of visits by Republican legislators and party leaders in the event that the [Naftali] Bennett-[Yair] Lapid government actually is sworn in,” Zell noted. “They might come to try to keep Israel in line with what Republicans consider proper U.S. policy, or they may stay away because they don’t want to have any friction with the new government on the issues where this new government may be playing up to the Biden administration.”

However, there is no evidence that this view has been adopted by any prominent American lawmakers. While visiting Israel last week, Sen. Graham stressed that U.S. support for Israel is not contingent upon who governs the country. “No matter who they select to run the government here in Israel, American will be in your camp,” Graham said at the press conference. “If a new government is formed, the relationship will stay the same between us and Israel.”

Recent Republican travel to Israel could also stem from a desire to signal politicians’ opposition to Biden’s policies in the region. Rather than relating directly to any political campaigns, “I think it has more to do with the critique of the current administration’s foreign policy,” Zell explained.

This might also explain why Democratic senators have not traveled to Israel since the conflict: A number of senior administration officials, including Secretary of State Tony Blinken and Deputy Assistant Secretary for Israeli and Palestinian Affairs Hady Amr, have already done so. Sens. Chris Coons (D-DE) and Chris Murphy (D-CT) visited the Middle East in early May, before the fighting broke out between Israel and Hamas. Coons visited the UAE to discuss nuclear negotiations with Iran, and Murphy stopped in Oman, Jordan and Qatar to discuss the war in Yemen.

Ultimately, the reason candidates visit Israel is not to influence policy, which many can’t yet do. It “gives you the opportunity, when you’re writing an op-ed or making a speech, to say, ‘I stood there across from Hamas-ruled Gaza,’ or, ‘I could see from the U.N. observation post Hamas 1000 yards away,’” Abrams said.