After nearly 40 years, Kurz recently retired from AIPAC — and talks history, the Iran deal, and why the Squad can’t be convinced on Israel 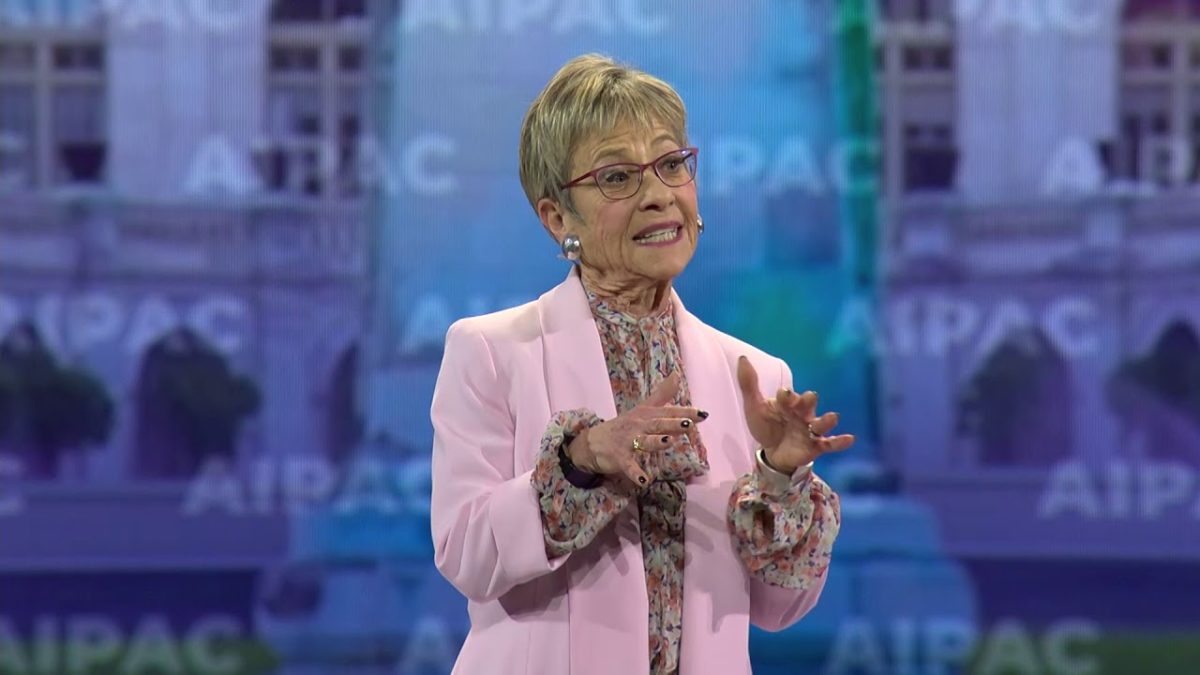 Picture this: Israel is at war. Op-ed writers and major TV personalities are blasting the country’s actions. Members of one party in Congress are opposed to some U.S. aid to Israel, threatening to hold it up unless Israel acts in a certain way.

But instead of last month’s 11-day conflict between Israel and Hamas, it’s 1982, and Israel is at war with Lebanon. Rather than a handful of far-left Democrats who were urging Congress to limit aid to Israel, it was Republicans who criticized foreign aid to Israel. Months after the war ended, President Ronald Reagan held up the sale of F-16 fighter jets to Israel because he disapproved of Israel’s actions in the Lebanon war.

For Ester Kurz, who retired last week after 39 years at AIPAC, serving most recently as the lobbying organization’s director of legislative strategy and policy, the current partisan wrangling around Israel is nothing she hasn’t seen before.

“It feels very much the same,” Kurz told Jewish Insider in a recent interview from her vacation home in Bethany Beach, Del. “We didn’t have social media, but you had the nightly news… I can’t even begin to relate what it was like to watch every single night, on the nightly news, these pictures of bombed-out hospitals and schools in Beirut, and what the Israelis had done and the devastation and the critique that came out from some of the mainstream media to the nightly news to top opinion makers, The New York Times, I mean, you name it, you had a stream of the most hostile verbiage against Israel.”

As Kurz looks back on nearly four decades at one of the most prominent pro-Israel organizations in the country, she argues that history shows that the current rise in anti-Israel sentiment will be another passing fad, and that the bipartisanship promoted by AIPAC will largely remain the norm.

However, she also acknowledged that certain politicians — including former Israeli Prime Minister Benjamin Netanyahu and former President Donald Trump — have at times allowed partisanship to affect the U.S.-Israel relationship, at times presenting a challenge for AIPAC. When asked whether Netanyahu’s 2015 speech to Congress, when he accepted an invitation from Republican House Speaker John Boehner without informing then-president Barack Obama before it was announced publicly, made AIPAC’s work more difficult by challenging the bipartisan nature of the U.S.-Israel relationship, she said yes. (Ron Dermer, who was then the Israeli ambassador to the U.S., said on a Jewish Insider podcast recently that Boehner had told the Israelis that he was going to inform the White House.)

“We did hear about it for a long time afterwards,” Kurz said of the speech. “Even today, a lot of new members raise that as a turning point for them.” Reports at the time said that AIPAC had urged Netanyahu not to give the speech, but Kurz said she was unaware of such conversations.

Here, too, Kurz opted to point to history to show that Netanyahu is not the first Israeli prime minister to openly clash with politicians in the U.S. In the early 1990s, in clear opposition to then-President George H.W. Bush, Prime Minister Yitzhak Shamir flaunted his support for settlement growth. In a 1992 speech, Shamir told supporters that he would “tell the Gentiles of the world” that “no force in the world will stop this construction” of Israeli homes in the West Bank and Gaza.

At the time, Bush said he would not sign off on loan guarantees for Israel until it halted settlement construction and entered peace talks with the Palestinians. AIPAC and other pro-Israel organizations lobbied Congress to urge Bush to drop his conditions, which he did not; AIPAC stopped fighting it. Kurz described this as an obstacle past which AIPAC swiftly moved, because in 1992 Bush ultimately gave Israel the loan guarantees: “That turned into a success story,” she argued.

In Kurz’s view, as long as AIPAC and pro-Israel advocates can get facts about Israel to lawmakers, they can win people over. “I’m a firm believer in facts. I think facts, at the end of the day, and reality [are] what turn things around,” said Kurz. Here she pointed to a small number of Republicans, led by Sen. Jesse Helms (R-NC), who were critical to foreign aid as a U.S. policy goal: : “Republican opposition in the ‘80s was not fact-based, in terms of being so anti-foreign aid.”

Kurz believes traveling to Israel is a vehicle to change critics’ minds. She mentioned that Helms shifted his position after visiting Israel in 1985. (And after narrowly beating a pro-Israel Democrat in 1984 who won the support of most of North Carolina’s Jews.) “They showed him a different side of Israel, and they presented him with the reality of Israel and why Israel is such an important ally and why foreign aid played such a key role, and he turned around,” she recalled.

But when she looks at “the Squad,” the Democratic members of Congress who have been critical of Israel since taking office in 2018, and who criticized the country during its recent war with Hamas, Kurz sees little opportunity to change minds. “I’m not saying the Squad can be turned around. They come at this from a certain perspective. And as I say, they’re not interested in the facts. But the vast majority of members of Congress, for them, facts do matter,” she said.

Kurz has not met with any members of the Squad personally, claiming they would not agree to meet with her or AIPAC. “We divide up areas of responsibility among different lobbyists, and so I had one or two of the Squad members,” she said, though she did not name who were in her portfolio. “They did not want to meet with us. I think that’s one of the frustrating things — that they obviously speak out frequently on the subject, and yet are unwilling to really listen to other voices.”

“They don’t know the facts. They spout things that don’t make any sense,” Kurz noted. A 2019 Pew poll found that nearly three-quarters of American voters believed Republicans and Democrats disagreed about “basic facts,” and often people on both sides of the Israeli-Palestinian issue present different sets of facts.

Ultimately, Kurz believes the members of the Squad, including Reps. Alexandria Ocasio-Cortez (D-NY) and Ilhan Omar (D-MN), don’t have much sway over Democratic positions on Israel, and that their hostility toward the country — referring to Israel as an “apartheid” state — will be just another bump in the road of the long history of strong U.S.-Israel relations. “I think that they have, really, very little influence in the day-to-day workings of Congress,” Kurz stated. “But they are loud.”

She attributed the increase in anti-Israel sentiment among far-left Democrats to several factors: the growing influence of progressives in Democratic politics, social media, intersectionality and increased involvement from human rights groups like Amnesty International and arms control groups. “They got engaged during the Iran debate, and they’ve stayed engaged, so they’re pushing hard in a way that we hadn’t seen before, and affecting lawmakers,” said Kurz.

AIPAC’s approach to Iran’s nuclear program has alienated some Democrats who viewed the 2015 Joint Comprehensive Plan of Action (JCPOA) as one of Obama’s top accomplishments. The organization spent the summer of 2015 urging Democrats to vote against approving the JCPOA. Four Senate Democrats and 25 House Democrats opposed the deal.

In the years that followed, many Democrats rallied around the Iran nuclear deal. In 2018, after Trump pulled America out of the JCPOA, Democrats prioritized reentering the deal, and President Joe Biden’s administration is engaging in indirect talks with Iran to rejoin the agreement.

“It’s never easy to go against the president of the United States on an issue, especially a foreign policy issue. But I’ve learned, again, through my many years at AIPAC, that it’s not always about winning a particular legislative fight, seeing what happens as a result of that fight,” Kurz observed. “We may not have won the battle, but we’ve sort of done better with the war.”

She called AIPAC’s actions in 2015 a victory, even if the Obama administration still entered the deal. “We also were able, in the midst of that fight, to convince the American public that this was not an agreement that was particularly in America’s best interest,” Kurz noted. Several months after AIPAC’s lobbying campaign, a February 2016 Gallup poll found that 57% of Americans disapproved of the deal.

In public comments on the Biden administration’s goals for renegotiating the Iran deal, Secretary of State Tony Blinken has said that the president seeks a “longer and stronger deal.” Kurz believes AIPAC deserves some credit for this stance. “I think they’ve internalized and understood the point that [the original] agreement was insufficient,” she said. “I’m not sure that would have happened if we hadn’t put up the fight.” Kurz has no regrets about AIPAC’s handling of the JCPOA in 2015; when asked if AIPAC should do anything differently if it chooses to oppose a renegotiated deal, Kurz said, “I don’t think so.”

Trump’s decision to leave the Iran deal was widely criticized by Democrats, but AIPAC said the move “provides an important opportunity to apply further diplomatic and economic pressure on Iran,” while also noting the need for a “bipartisan consensus” on keeping Iran from acquiring nuclear weapons. That approach characterized much of AIPAC’s handling of Trump’s presidency — praising his policies that advanced pro-Israel priorities while also looking for ways to remain bipartisan.

“It was difficult in many ways, because there was what Trump was doing domestically and the opposition that engendered, particularly among Democrats,” said Kurz. “From the Israeli perspective, they didn’t see the domestic impact that Trump had in this country. They were just viewing it from the impact it had on the U.S.-Israel relationship, and from that point, it was very positive. So it was a tough time, because you have the two tensions coming at each other.”

But even while Trump was president, Kurz noted that Congress continued to pass bipartisan legislation on Israel. “It’s been tough all around, but we’ve gotten through it, and I think that [we’ve] come out stronger for it,” she said.

As Kurz begins retired life, she is planning a month-long trip to Israel. She hasn’t visited since February 2020, the longest she’s ever gone without traveling to the country. She can’t count how many times she’s been to the country — at least twice a year with AIPAC; four years as a student at Hebrew University in Jerusalem, where she earned her bachelor’s degree; and childhood visits to family in the country. “Hundreds of times and it’s never enough,” Kurz remarked.

One trip in particular stands out to her, when she visited Israel with an AIPAC delegation just after the Oslo Accords were signed in 1993. The group had a meeting with the speaker of the Palestinian parliament — “that was when the parliament actually existed and met,” which it hasn’t done since 2007, Kurz noted — and he invited them to sit in the gallery and watch the parliamentary proceedings. “He said, ‘and I want to welcome our guests from AIPAC,’ and he pointed to the visitors gallery, and the whole place clapped. We were like, ‘Oh, my God, what a moment,’” Kurz recalled.

The idea of a Palestinian legislature cheering for a group of AIPAC staffers seems unfathomable today. “It embodied the hopes and the possibilities that existed,” Kurz noted. “I actually thought during Oslo, I said, ‘Wouldn’t it be great? We wouldn’t need AIPAC anymore.’”