Democratic split on Israel on display in competing House speeches 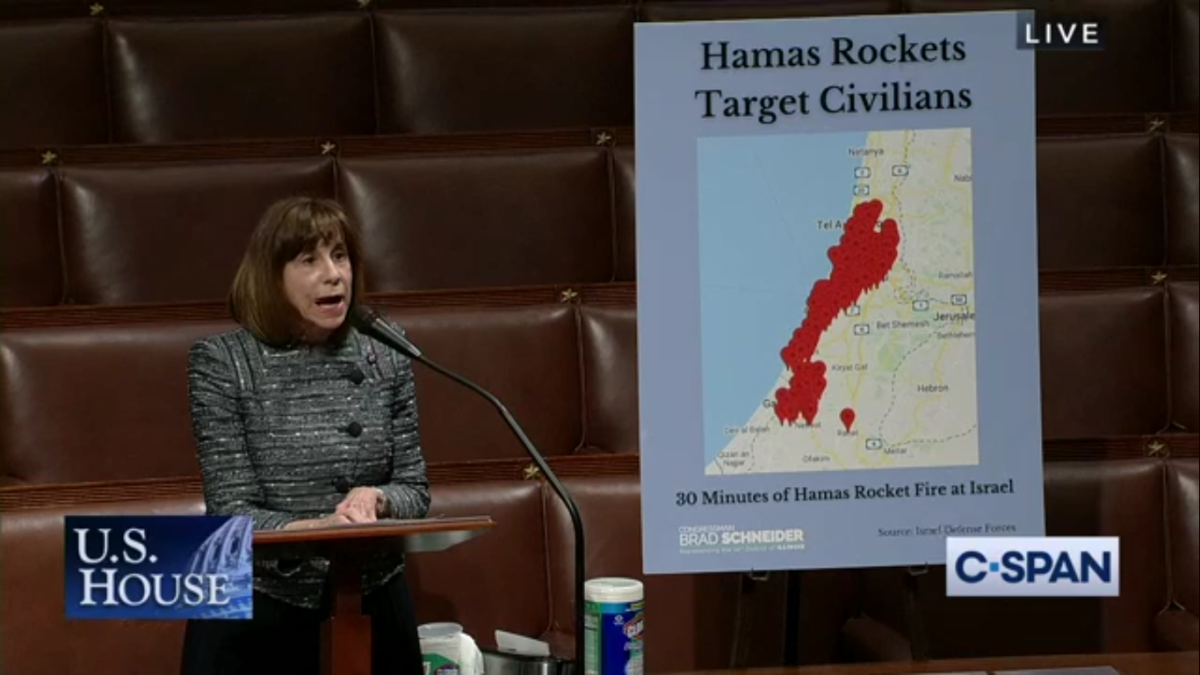 Opposing groups of House Democrats leveled both direct and indirect attacks against each other on the House floor on Thursday evening in speeches that addressed the ongoing conflict in Israel and the Gaza Strip. The speeches marked the latest and most direct clash among Democrats this week on Israel as violence in the region flared.

Standing beside a poster showing a map of Israel covered in location pins marking the targets of recent Hamas air strikes, the pro-Israel lawmakers largely focused their remarks on the ongoing danger that Israelis face from missile attacks. Several also appeared to jab at their colleagues who have focused their criticism on Israel’s air strikes and sought to downplay the dangers posed by missile attacks.

“Some call [the Israelis] villains for defending their homes and their families; for not turning a cheek and a blind eye to terror and bombings and missiles raining down,” said Luria. “Who would turn a cheek when their mere right to exist is questioned? Or turn a blind eye when history has been so unforgiving? Not you and not the Israelis.”

Luria’s speech was met with a “hear hear!” and a small round of applause from a few of the Republican lawmakers in the chamber at the time.

Deutch’s speech was also met with a smattering of applause from the small crowd in the chamber.

“Israel has taken serious steps to de-escalate the conflict while Hamas has only escalated its attacks. So it’s especially irresponsible to demonize Israel’s conduct while ignoring her right to self defense,” Wasserman Schultz added.

Manning brought her own personal experiences to the fore in her speech, recounting her own encounter with rocket fire from Gaza during a past trip to Israel.

“I’ve been in Israel when rockets were fired from Gaza in Sderot,” Manning said. “I know the terror of running for cover with sirens blaring overhead, not knowing whether I’d make it in time.”

Pocan, who organized the counter speeches, opened his remarks acknowledging and condemning the rocket attacks and Hamas — possibly seeking to forestall the criticisms that have been leveled against fellow progressive lawmakers amid their critiques of Israeli policy.

“No one should have to face the reality of missiles shot at them. Hamas is causing great danger to the very people it purports to want to protect in Gaza by doing so and those missile attacks should be condemned,” Pocan said.

“But that doesn’t make it a both-sides issue,” he continued. “We must acknowledge and condemn the disproportionate discrimination and treatment that Palestinians face… No one should suffer the loss of life, liberty or dignity that the Palestinian people have suffered under the Netanyahu and previous administrations in Israel during the 50-year occupation of the West Bank.”

Pocan went on to speculate that further escalation “could mean the lives of men and women from the United States getting involved in a greater escalation of violence in the region,” without specifying further what he meant.

Pocan’s speech largely set the tone of those to come — while several of the speakers acknowledged and disavowed the rocket attacks targeting Israel, they argued that the more significant issue that the U.S. must address is Israeli treatment of Palestinians writ large, and said that conditioning U.S. military aid to Israel is the path to doing so.

Tlaib, standing beside posters showing injured Palestinian children, followed Pocan with a tearful speech in which she spoke out about her own experiences as a Palestinian American and excoriated her colleagues.

The Michigan congresswoman went on to lambaste Democratic leaders’ responses to the ongoing violence.

“To read the statements from President [Joe] Biden, Secretary [of State Tony] Blinken, [Secretary of Defense] Gen. [Lloyd] Austin and leaders of both parties, you’d hardly know Palestinians existed at all,” she said.

Tlaib also called out Democratic leadership for criticizing the Boycott, Divestment and Sanctions movement, of which she is a vocal proponent, as antisemitic. By the end of Tlaib’s speech, the chamber had emptied but for the other members who were part of the Pocan presentation.

Omar likewise slammed members of Congress for statements supporting Israel’s right to self defense and criticizing the Hamas rocket attacks.

“Instead of condemning blatant crimes against humanity and human rights abuses, many members of Congress have instead fallen back on the blanketed statement defending Israel’s airstrikes against civilians under the guise of self-defense without even a mention of the children getting killed, much less a mention of what happened at Al-Aqsa or in Sheikh Jarrah,” she said.

Pressley, pushing back against “many [who] say that conditioning aid is not a phrase that I should utter here,” argued that “no matter the context, American dollars always come with conditions.”

In her speech, Bush referred to the capital of Israel as “Jerusalem, Palestine.”

But it was not only Democrats who made their voices heard Thursday on the conflict. Across the aisle, 63 Republicans, led by Rep. Carlos Giménez (R-FL) introduced a resolution on Thursday condemning Hamas rocket attacks, recognizing Jerusalem as the capital of Israel, reaffirming U.S. support for Israel’s security and emphasizing U.S. opposition to antisemitism.