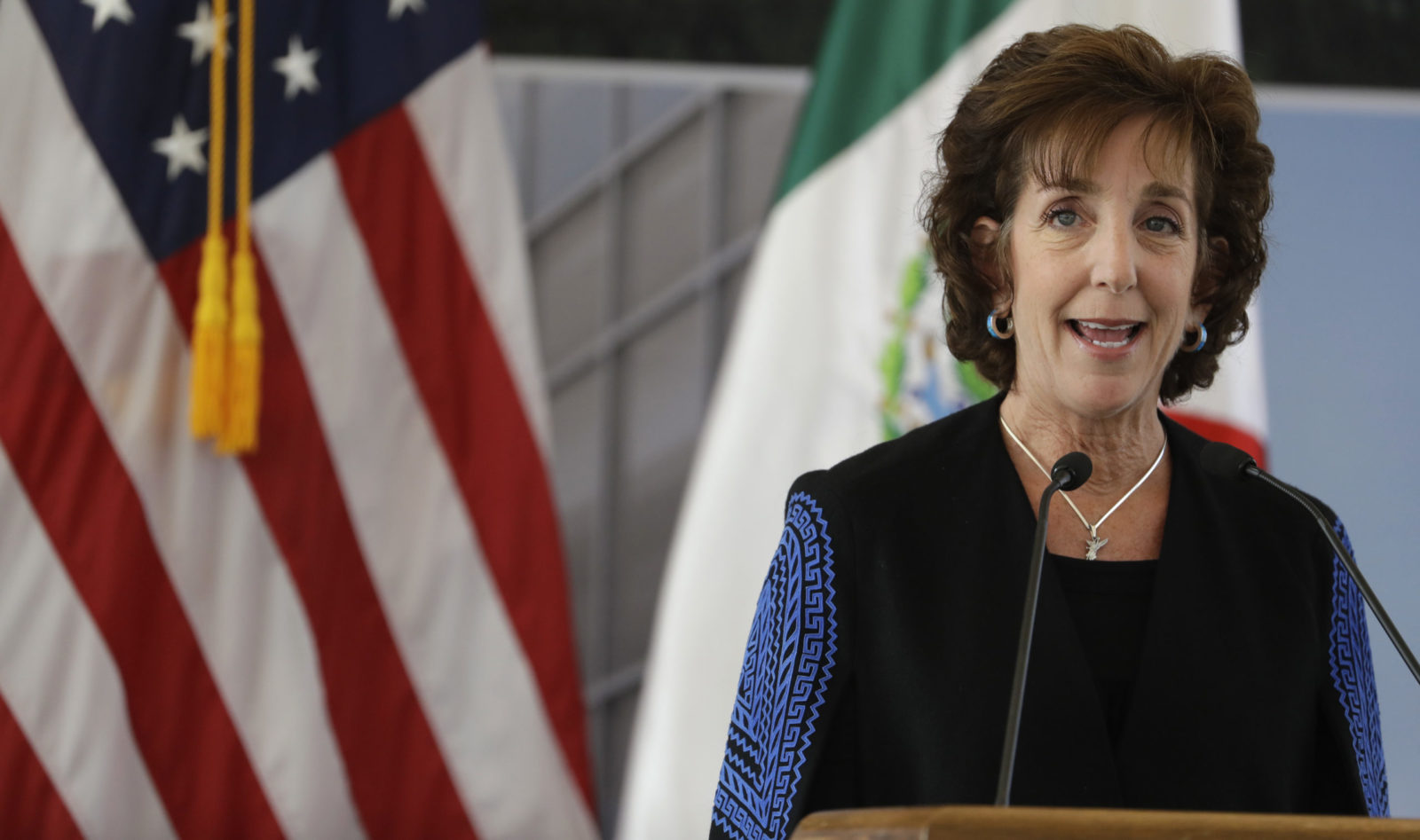 For Jacobson, a career in civil service culminated in a posting as U.S. ambassador to Mexico — until Biden asked her to return to the executive branch

When a new president is inaugurated, the changing-of-the-guard that commences at federal agencies across Washington, D.C., takes place at U.S. embassies around the world, too. It’s a Washington ritual: In many high-profile nations, the new president replaces his predecessor’s staffers with his own picks.

During his 2016 campaign, former President Donald Trump was critical of Mexico and promised to build a wall along the southern border to keep out Latin American migrants. But after winning the election, Trump did not move to replace former President Barack Obama’s appointed ambassador to Mexico, Roberta Jacobson. Rather, the career civil servant, who assumed her role in May 2016, remained as ambassador until May 2018, more than a year after Trump took office.

Now, Jacobson has joined President Joe Biden’s National Security Council as the administration’s “border czar,” tasked with stemming the increasing tide of migrants arriving at the United States’s Southern border. As the special assistant to the president and coordinator for the Southwest border, Jacobson is tasked with engaging diplomatically with Mexico and the “Northern Triangle” nations of Honduras, Guatemala and El Salvador, from where most migrants originate.

A National Security Council spokesperson declined to make Jacobson available for an interview, but conversations with immigration experts, former colleagues of Jacobson and Jewish community members who know her paint a picture of a widely respected diplomat with an abiding love for the region setting out on a thankless, seemingly insurmountable task.

“It’s a temporary position, in theory. She was asked to serve for 100 days,” Selee noted. “[The Biden administration] knew that there was a surge coming,” and Jacobson was tasked with preparing for it. Last month, more migrants crossed into the U.S. than at any time in the past 15 years, according to U.S. Customs and Border Protection.

“Inside the government, the State Department, [Jacobson] was the person that everyone spoke glowingly about as someone who knew how to get things done,” Selee said. (Last year, Jacobson was tapped to join MPI’s board of trustees, a position she was set to begin in January but which is now delayed until she leaves government service.)

Jacobson first became interested in Latin America when she studied Spanish in high school. But she told Tufts Magazine that her passion for the region deepened during her undergraduate studies at Brown University, which corresponded with “the period during which Latin American countries began to go from military dictatorship to democracy.” At the same time, “I became captivated by the culture and the rhythms of the music and the dance,” she said, “so it all came together for me, which was odd for a nice Jewish girl from New Jersey.”

Soon after earning a master’s degree at Tufts’s Fletcher School of Law and Diplomacy, Jacobson came to Washington as part of the Presidential Management Internship Program, a prestigious training program that placed her at the National Security Council.

“She was obviously a very talented young person,” said William Brownfield, a career foreign service officer who previously served as assistant secretary of state for the Bureau of International Narcotics and Law Enforcement Affairs and worked with Jacobson in a number of domestic and overseas postings.

Jacobson was not the first person in her family to work in public service. “My mom was first the head of the PTA, then the head of the Board of Education. My dad was the local chair of the zoning board” in her hometown of Englewood Cliffs, N.J., she told MSNBC in a podcast interview in 2019. “At one point, I worked for the State Department. My sister worked for the New York City Department of Developmental Disabilities… And my brother was a public defender, and people in the town where I grew up would offer my father condolences, because here he had three kids with these very fancy expensive educations and none of us were making any money. We grew up with a sense of commitment to public service.”

Jacobson’s husband, Jonathan, also works in public service; he has spent nearly three decades at the Environmental Protection Agency. Their family belongs to Adat Shalom Reconstructionist Congregation, in Bethesda, Md. Rabbi Fred Scherlinder Dobb, who has led the congregation for more than 20 years, told Jewish Insider that “at shul, you’d have no idea she was a high-ranking official — she’s genuine, and humble, and a mensch of the first degree.”

After joining the State Department as an intern in the late 1980s, Jacobson handily moved up the ranks as a civil servant, not a foreign service officer — a rare accomplishment. “Of all the foreign service officers, somewhere between 1 and 2% will actually become an ambassador,” Brownfield said. “But amongst civil service personnel in the State Department, it’s probably about one out of every 1,000 who actually would rise to become a U.S. ambassador.”

Before serving as America’s first female ambassador to Mexico, Obama appointed her to serve as assistant secretary of state for Western Hemisphere affairs, the top post covering Latin America and Canada. Jacobson served in that position throughout the Obama administration’s efforts to normalize relations with Cuba. She played a key role in securing the release of Alan Gross, an American contractor who was imprisoned for five years in Cuba for attempting to distribute internet-connected devices to members of Cuba’s Jewish community. Jacobson visited Gross in prison, and Gross told JI that her visit “was one that stands out.”

“She came not only to wave the flag, but she came to give me some assurances that I took seriously. And I very much appreciated her visit,” Gross said. “She did not come across to me as just another government bureaucrat.”

Jacobson continued to work on securing Gross’s freedom following her 2011 visit, and raised the matter of his imprisonment in a 2014 meeting with Cuban officials. Gross was finally freed later that year, in a move that was seen as the beginning of the Obama administration’s push to reestablish ties with Cuba. Secretary of State John Kerry lauded Jacobson’s work on Gross’s situation: “She gets a lot done out of the limelight,” Kerry told McClatchy in 2015. “I think about the big hug Alan Gross gave her. This was someone who knew Roberta fought for him and delivered for him.”

Jacobson met Gross on the tarmac of Joint Base Andrews when he returned from Cuba. “This is something she didn’t have to do. A lot of people who met me at the airport really didn’t have to do it, unless they were running for reelection, and wanted to get their pictures in the paper,” Gross recounted. “I really have a very high opinion of her.”

Although her position at the State Department involved all the nations in the Western Hemisphere, Brownfield noted that Mexico was always a particular focus for Jacobson. “I don’t think anyone would challenge me if I say that, within the United States government, she was the lead expert on Mexico and U.S.-Mexican affairs, bar none,” said Brownfield. As one example of Jacobson’s diplomacy in action, Brownfield cited the arrest and extradition of Joaquín “El Chapo” Guzmán, the Mexican drug lord who led the Sinaloa cartel and had escaped from prison in 2015.

In Brownfield’s view, Jacobson would have had to ask questions like, “Who shares information with whom? What is the intelligence that will be shared? What will we tell the Mexicans? What do I ask the Mexicans to say to us?” And there was no time to waste — “it’s not like Mr. Guzmán is hanging around waiting to be arrested. He’s constantly on the move, [so] she had to make the right decision,” Brownfield said, and “she had to ensure that the right people in Washington were informed so that she wasn’t blindsiding anyone.” Brownfield was the State Department’s lead expert on narcotics at the time, and he thought Jacobson got it right: “That’s a classic example to me of an ambassador doing a very difficult job under very difficult circumstances and getting it right at every point along the way.”

After stepping down as U.S. ambassador to Mexico in 2018, Jacobson joined Albright Stonebridge Group, a consulting firm founded by former Secretary of State Madeleine Albright. (Several other Biden appointees, including U.N. Ambassador Linda Thomas-Greenfield and Deputy Secretary of State-nominee Wendy Sherman, also worked at Albright Stonebridge.) But she apparently had not ruled out government service for good. At the start of the new administration, “they needed someone who was senior and immediately available, who did not have to wait for the confirmation process,” Brownfield said, regarding the pick of Jacobson to become the border czar.

Brownfield told JI that he assumed the new administration was aware that a new wave of migrants would arrive with Trump’s departure earlier this year. “[Migrants] hit the road again in the expectation that there would be a better reception and a better chance for them to be able to enter the United States, either lawfully or unlawfully, with the departure of the last administration,” Brownfield said. “I think the hope was that there would be enough time to get a new plan kind of in place and operational before the surge began,” but instead, Jacobson has had to do crisis control, rather than long-term planning.

The White House has insisted the surge in migrants is not a crisis, while congressional Republicans have referred to the surge as the “Biden border crisis.” Nonpartisan experts say it’s more complicated and largely the result of seasonal migration patterns, but certainly cause for concern. What’s not in dispute is that the increase in new migrants arriving at the southern border — especially the rise in unaccompanied minors — is a tremendous challenge facing the new administration. Last month, Biden tapped Vice President Kamala Harris to serve as the point person on immigration at the southern border, “but the real work is still being carried out by Roberta and her team,” said Selee of the Migration Policy Institute.

Experts agree that surges will continue happening so long as violence and economic crises are ongoing in Central America. “Part of Roberta’s challenge is both dealing with the immediate crisis, but also taking steps to deal with the longer-term crises that have led people to leave their countries in large numbers and how the U.S. responds to that every time it happens,” Selee observed. “We keep finding ways of enhancing enforcement and stopping people from coming, for a while. And then people in Central America find their ways around that enforcement.”

“The good news,” said Brownfield, “is Roberta is one of the United States of America’s great crisis managers. The bad news is she’s having to do it on a timescale that’s much, much faster, I think, than the administration had expected.”