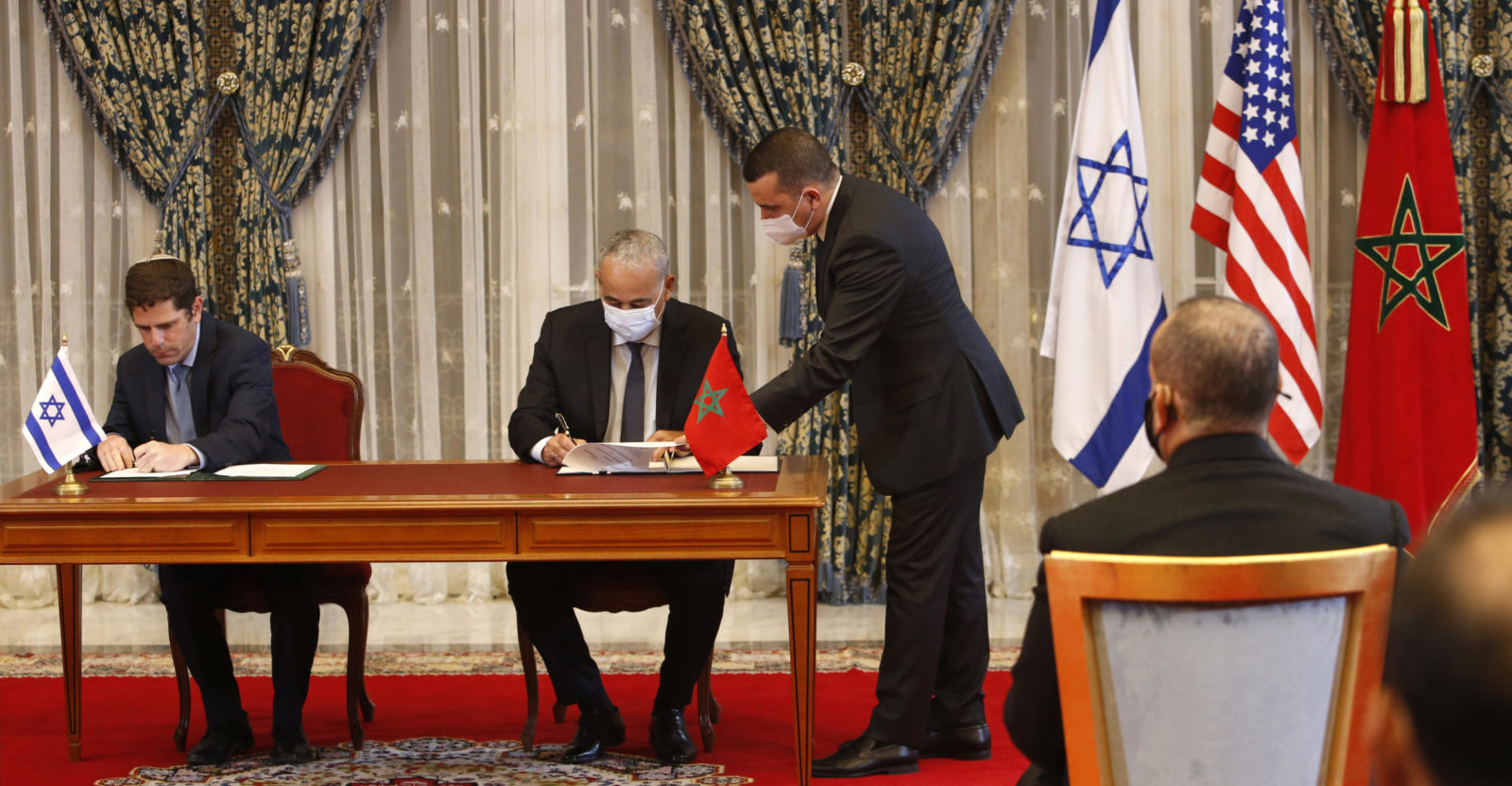 In brokering a deal between Israel and Morocco, the U.S. became the first Western nation to recognize Moroccan sovereignty over the disputed North African territory

Just weeks before leaving office, President Donald Trump announced a resumption of diplomatic ties between Israel and Morocco, one of five Arab countries to recognize Israel in a series of historic deals. Unlike the other countries, Morocco has not yet resumed full diplomatic ties with Israel. Full normalization between Israel and Morocco hangs in the balance as the White House reviews a key component of the deal.

Morocco agreed to the deal on the condition that the U.S. recognize Moroccan sovereignty over Western Sahara, a former Spanish colony claimed by both Morocco and the Sahrawi people, who are indigenous to the region. The leadership of the Polisario Front, the movement seeking independence for Western Sahara, is based in Algeria, along with thousands of Sahrawi refugees.

Trump’s decision made the U.S. the first Western nation to recognize Moroccan sovereignty over the territory, raising questions about how the U.S. might handle other contested territories such as Crimea and even Israeli settlements in the West Bank.

It also has major implications for Israel abroad: If the Biden administration reneges on the Trump policy, there’s a chance Morocco could once again cease or not advance diplomatic ties with Israel. And the issue is far from settled in Washington, with 27 senators hailing from both parties signing a recent letter urging the Biden administration to take back its recognition of Moroccan sovereignty in the region.

Morocco’s decision to resume official ties with Israel, following decades of discreet relations between the countries, was widely celebrated by Jewish and pro-Israel organizations. Most of the groups that commented on the agreement did not weigh in specifically on the issue of Western Sahara, with some exceptions; the American Jewish Committee, for instance, has taken a strong stance in support of Moroccan recognition.

AJC’s chief policy and political affairs officer, Jason Isaacson, said that recognizing Morocco’s claims is simply what the U.S. should do for a steadfast ally. “Morocco is an ally, a force for moderation, stability and interreligious harmony, and a partner in counterterrorism — and the Western Sahara is part of Moroccan history, the kingdom’s patrimony,” Isaacson told JI. He argued that reversing the policy now “would be a mistake, and a show of bad faith to a longtime friend.”

Morocco has linked the Polisario Front to Iran. In 2018, Rabat cut off diplomatic relations with Tehran after claiming the Iran-backed Hezbollah provided weapons and training to the organization. Some have argued an Iran connection is reason enough for Biden to maintain the deal.

“This becomes relevant because I would say all administrations are against the expansion of Iranian power and influence across the Middle East, and whether you’re in Lebanon, Syria, Iraq, or the Western Sahara, it’s the same problem,” said Dore Gold, former director-general of Israel’s Foreign Ministry.

“The whole Iran-Hezbollah connection with the Polisario? I don’t make much of it,” said Dan Arbell, a scholar-in-residence at American University and a former Israeli diplomat. “I think it’s a good Moroccan talking point, good propaganda point, but if there are contacts, they are very minimal [and] very insignificant.”

In Washington, the issue is far from settled. While Morocco has a sizable number of supporters in Congress — a congressional caucus on Morocco was formed in 2011 to signal support for the “vital strategic friend” in the early days of the Arab Spring — a bipartisan group of senators, led by Jim Inhofe (R-OK) and Patrick Leahy (D-VT), has been vocally opposed to unilateral recognition of Moroccan sovereignty.

“I think the way that the decision was made is what folks find very objectionable… [it] comes up against the current administration’s pretty strong belief and support for international institutions,” said Sarah Feuer, the Rosenbloom Family Fellow at The Washington Institute for Near East Policy’s Geduld Program on Arab Politics. “They don’t want to convey that if people go around just annexing territory, then eventually it can gain U.S. recognition.” Such a precedent could have implications for conflicts involving American adversaries, like Russia’s annexation of Crimea, or even for American allies, such as Israel’s quest to annex parts of the West Bank.

After Trump announced the agreement between Morocco and Israel in December, Inhofe, a Trump supporter, said that the recognition of Moroccan sovereignty is “shocking and deeply disappointing. I am saddened that the rights of the Western Saharan people have been traded away.”

In February, 27 senators signed a letter to Biden, writing that the decision to recognize Moroccan sovereignty over the region “was short-sighted, undermined decades of consistent U.S. policy, and alienated a significant number of African nations.” The senators wrote that they “urge [Biden] to reverse this misguided decision and recommit the United States to the pursuit of a referendum on self-determination for the Sahrawi people of Western Sahara.”

The senators hope to meet with the administration soon in an attempt to clarify Biden’s stance on the issue, a congressional staffer told JI.

“This is one of those things where you can either look at it as, ‘Wow, 27 senators actually got together and wrote this thing to object to the Sahara issue,’ or I think you can also look at this as, OK, basically, three-quarters of the Senate is on board,’” Feuer explained. “There isn’t exactly a political base in the United States for the indigenous Sahrawi people.”

Feuer told JI that “there is some concern” in Israeli policy circles about the Biden administration’s stance on Western Sahara. “They hope that the Biden administration will just uphold this decision, because they’re aware that if they go back on it, then it’s very possible, if not likely, that Morocco will also backtrack on the steps that it has taken with Israel.”

Arbell pointed out that Morocco has only partially resumed ties with Israel, due to the possibility that Biden might decide to alter the decision his predecessor made when Trump already had one foot out the door. “They realized that if they don’t get it now, they’ll miss the train,” Arbell told JI, noting that Morocco’s government recognized it had a unique opportunity for movement on Western Sahara in the waning days of the Trump administration.

“They opted for it fully understanding that it may not last. They’re taking a risk here that Biden may not want to play along or may walk it back,” Arbell said. “They’re not going all the way with Israel yet. They’re playing a waiting game right now.”

State Department maps used in materials released by the new administration show an expanded Morocco that includes the territory of Western Sahara, which has led to speculation that President Biden has, in fact, decided to quietly continue the policy implemented by his predecessor. But the White House has so far not made any statements about Morocco or Western Sahara.

When asked at a January press conference whether the U.S. would continue to recognize Moroccan sovereignty, Secretary of State Tony Blinken did not directly address Western Sahara but noted that the new administration planned to review deals made by Trump. “We’re also trying to make sure that we have a full understanding of any commitments that may have been made in securing those agreements, and that’s something we’re looking at right now,” Blinken said.

At the same press conference, Blinken also affirmed Biden’s support for the normalization agreements: “We very much support the Abraham Accords. We think that Israel normalizing relations with its neighbors and other countries in the region is a very positive development.” (The State Department did not respond to requests for comment on the Biden administration’s position on Western Sahara.)

The Biden administration’s recent decision to proceed with arms sales to the United Arab Emirates — a key tenet of the UAE’s normalization deal with Israel — over objections from some congressional Democrats suggests that the administration might be willing to stick with its predecessor’s policy on Morocco. (Trump also agreed to sell $1 billion in weapons to Morocco, a policy on which the Biden administration has also remained quiet.)

The decision to go through with arms sales to the UAE made people in Israel “breathe a little bit more easily,” Feuer said. “I think what we’re likely to see is quiet, maybe tacit, recognition and continuity in the policy,” she added, noting that the Biden administration does not want to be perceived as circumventing international institutions in its decision.

Since a 1991 United Nations-brokered ceasefire between Morocco and the Polisario Front, the U.N. has been attempting to bring the parties together to negotiate a settlement. Christopher Ross, an American diplomat, served as U.N. envoy to Western Sahara for eight years until resigning four years ago. The post remains unfilled; Blinken has called for a replacement to be named by the U.N.

The territorial dispute dates back to the 1970s, when Spain — which held Western Sahara as a colony — wanted to pull out of the region. Morocco attempted to assert sovereignty over the territory, but a 1975 ruling from the International Court of Justice “found no tie of territorial sovereignty between Morocco and the Western Sahara,” according to a Congressional Research Service report. Morocco’s king responded by leading 350,000 civilians to settle in the region. When Spain soon pulled out of the region, leaving it in the hands of Morocco and Mauritania (which later relinquished its claim to Western Sahara), the Polisario Front began to put up resistance, kicking off 15 years of fighting.

The population of Western Sahara is estimated to be between 500,000 and 600,000, with many Sahrawis living in refugee camps in neighboring Algeria. Skirmishes have taken place between the Polisario Front and Morocco since the ceasefire, and the issue remains a point of tension between the North African nations.

The most pressing concern about U.S. recognition of Western Sahara is that it might upset already tense relations between Morocco and Algeria. “The big question was, what are the Algerians going to do? Because you don’t want to have a war between Morocco and Algeria,” said Feuer. “This is still one of the relatively calm or stable corners of the Arab world.” The Algerian Foreign Ministry condemned the U.S. decision in December, but has taken no significant action against Morocco.

The ceasefire agreement called for a referendum to determine the final status of the region, which has not yet taken place. While the Polisario Front continues to call for the vote, it is widely acknowledged that it is unlikely the vote will occur.

The African Union includes the Sahrawi Arab Democratic Republic, the self-proclaimed Sahrawi nation in Western Sahara, as a member state. Some nations, particularly South Africa, have taken strong positions on the issue; in January, South African Minister for International Relations Naledi Pandor urged Biden to “urgently reverse his country’s recognition of Morocco as having sovereignty over Western Sahara.” Meanwhile, at least 18 nations have consulates in Moroccan-administered parts of the territory.

Germany, the only other Western nation to wade into the discussion, criticized the Trump administration’s move, calling on the U.S. to “act within the framework of international law,” prompting a diplomatic standoff between Morocco and Germany. Last month, a letter from Morocco’s foreign minister was leaked in which he suggested the country cut off relationships with German political and cultural organizations in the country, after already ceasing contact with the German embassy in Rabat.

As the White House attempts to reassert America’s global leadership, its actions on Western Sahara could offer an important signal to the rest of the world — on whether the U.S. will keep its promise, or whether it will opt to support international institutions.