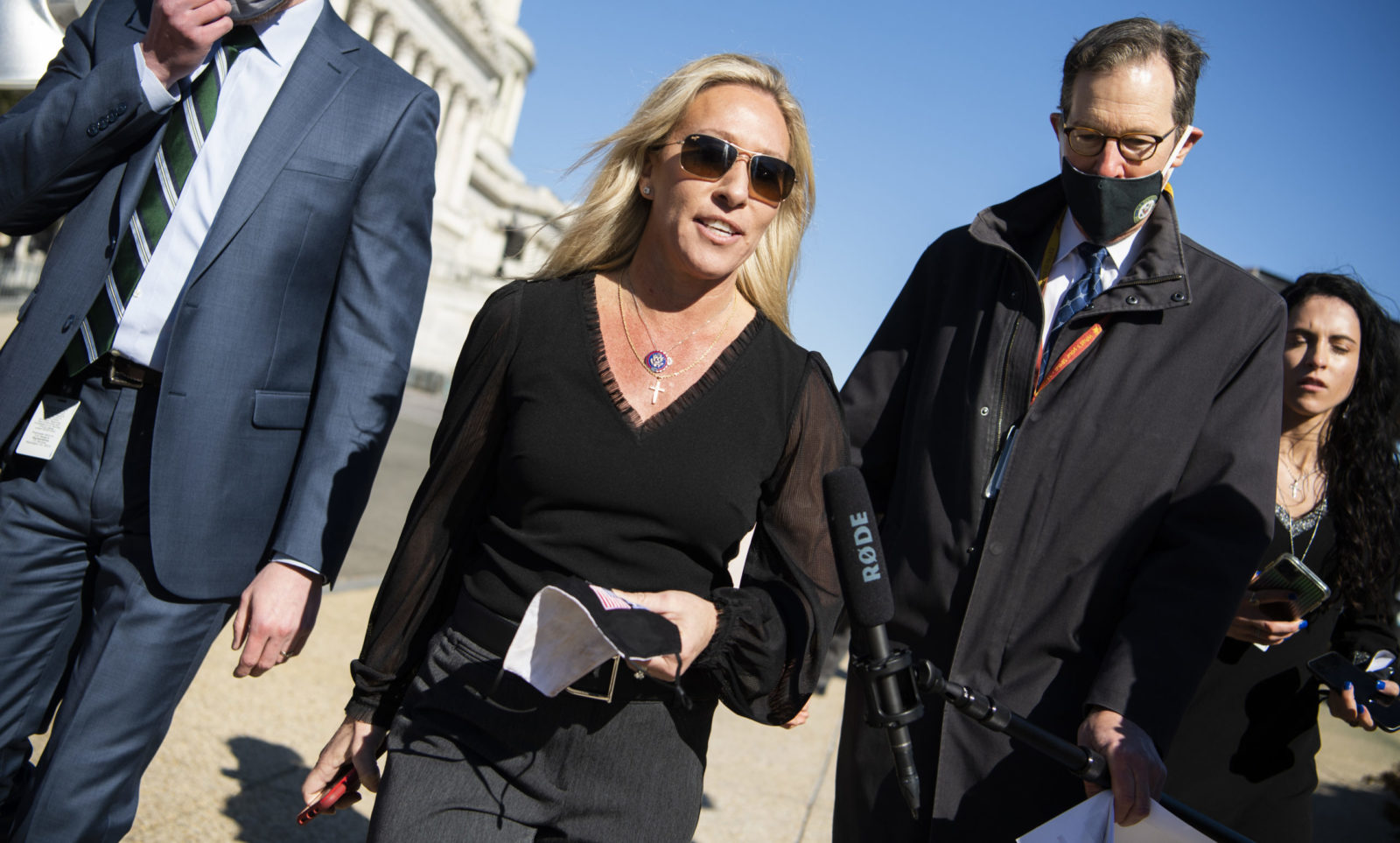 Rep. Marjorie Taylor Greene (R-GA) — the first-term Republican congresswoman notorious for her history of antisemitic, racist, Islamophobic and conspiratorial comments — has, in just three months in office, become a prominent subject of Democratic ire and is increasingly frustrating some GOP colleagues.

But Greene hails from Georgia’s 14th congressional district, one of the most reliably Republican districts in the country, and recently announced an eye-popping $3.2 million in first-quarter fundraising. It’s a district, tucked into the northwest corner of Georgia, that former President Donald Trump won by nearly 50 percentage points in 2020. Though Georgia just elected its first African-American and Jewish senators and flipped to blue in the 2020 presidential election, Democrats are believed to have next-to-no chance of toppling Greene in the November 2022 midterm election. A few candidates are trying anyway.

Though more than a year out from the district’s Democratic primary, four candidates already entered the race, including Army veteran and defense contractor Marcus Flowers and small business owner Holly McCormack. Another candidate, Lateefah Conner, is also in the race, and local activist Brittany Trambauer Smith filed to run in February, but quickly dropped out.

In recent interviews with Jewish Insider, both Flowers and McCormack said that the January 6 Capitol riot was their impetus for entering the race. Greene has associated with some of the individuals and groups involved in the riot, and promoted the election fraud falsehoods that inflamed the crowd that entered the Capitol.

“Once I saw that, and how far we’ve fallen, and a Confederate battle flag paraded through the Capitol rotunda, for me, it became mission critical,” Flowers said. “And I had to get in, I had to do something because I felt Marjorie Taylor Greene helped incite that insurrection. And I feel that her twisted conspiracy theories are not only dangerous for our district, and Georgia, for the entire country as well.”

Flowers added that he first became politically engaged and considered running during the summer of 2020, which saw both nationwide racial justice protests and riots and Greene’s successful primary bid to fill the seat left vacant by the resignation of Rep. Tom Graves (R-GA). Serving overseas in Iraq and Afghanistan, Flowers said he has “seen firsthand… the damage done by extremism, radicalism and disinformation” and believes “that’s where [Greene’s] trying to take us as a country.”

McCormack said that she’s running to set an example for her children.

“I’ve raised them to have empathy and to be kind and to do the right thing. And the current representation is the opposite of all of those things,” she said.

Flowers launched his campaign with a slickly produced spot — that was mocked by some Democrats — in which he sports a cowboy hat and poses alongside a military-style aircraft.

The video helped launch Flowers into the spotlight and he has raised more than $500,000 in his first month in the race. That puts him well ahead of McCormack, who has raised just $85,000, but has built up a larger Twitter following. Conner has raised approximately $25,000. The Democrats significantly trail Greene, who has used the controversies she has become embroiled in and her status as a Democratic bête noire to raise $3.2 million in the first quarter of 2021 — an astounding haul for a freshman nearly two years out from reelection.

Asked whether a Democratic challenger has a shot at defeating Greene in the ruby-red district, Charles Bullock, a longtime political science professor at the University of Georgia, chuckled.

“That would probably be a longer shot than the University of Georgia’s men’s basketball team winning the national championship — which has never happened,” Bullock told JI.

But both candidates are hopeful that with the right alternative to Greene, voters in the rural district, which was 85% white in the 2010 census, are persuadable.

“I’m running to let [people] know we’re not all communists, we’re not drinking the blood of babies. We’re not doing all these crazy things that [Greene’s] saying we’re doing,” he continued, referencing Greene’s past promotion of the QAnon conspiracy theory. “I think people are receptive to it… They’re looking to not be afraid anymore. And that’s what I’m going to give them. Remove all the fear from our political rhetoric.”

McCormack said that a recent listening tour in the district has reinforced her belief that district residents are receptive to her as well — although she indicated that she’s been downplaying her party affiliations.

“There are good people here that raise their families in the same way that I do. And there’s been a void in leadership since this district was made… If they see someone show up for their interests and actually care, and ask them what issues are important to them and [do] the good work in the community, that’s going to transcend party lines,” McCormack said.

Recent reporting from the district does not bolster these hopes; despite negative national press coverage, Greene maintains widespread support among her constituents.

While Greene ran unopposed in November 2020, she did, briefly, have a Democratic opponent. That candidate, IT professional Kevin Van Ausdal, was abruptly thrust into the spotlight after Greene emerged victorious from a GOP runoff in August 2020. Van Ausdal, who faced death threats from Greene supporters, ultimately dropped out of the race and moved out of the state after his marriage collapsed amid the stress of running an increasingly aggressive campaign against Greene.

Flowers and McCormack told JI they were aware of Van Ausdal’s experiences and had prepared accordingly.

Flowers said his campaign has already begun to face harassment from Greene supporters, including a deluge of trolls who prompted Twitter to temporarily take down his campaign launch video. “We are going to continue pressing forward in getting our message out to the people,” he emphasized.

McCormack said that death threats and harassment were a major consideration before she declared her candidacy, adding that she and her family have made security plans.

Both candidates said their top issues would be ones that generally have broad bipartisan support: Flowers said he would prioritize COVID-19 relief, including vaccines, health care and boosting small businesses, as well as infrastructure and improving care for veterans. McCormack said that, if elected, expanding rural broadband would be her top issue.

Although both candidates are running in direct response to the January 6 riot, their plans for addressing the domestic extremism and terrorism threat within the U.S. appear to be limited to ousting Greene and other divisive politicians.

“We already have laws on hate crimes, and things like that on the books. But for me, our leaders need to step up and be held accountable for their words and actions. We need to come back to decency and civility,” Flowers said. “It comes from the top.”

“We need to get back to a place where we see each other as people and get past these issues,” he added.

McCormack said that the participants in the attempted insurrection must be identified and held accountable, but otherwise largely echoed Flowers.

“Directly about Marjorie Taylor Greene, her rhetoric and the space lasers and things like that, she’s just destroying our credibility as you know, a leader in the world,” she added, referencing Greene’s past claims that the Rothschild family had used a space-based laser to start California wildfires. “January 6 didn’t happen in a vacuum. That was made possible by four years of sowing hate and that rhetoric that we heard from the leaders [of the Republican Party]. We need to nip that in the bud with Marjorie.”

McCormack added that she is not aware of antisemitism within the Democratic Party, and said that Greene is “the largest example that we can think of.” Flowers said antisemitism is a problem “no matter what side of the aisle you’re on” but appears to him to be more prevalent on the right.

Flowers, who spent time as a serviceman and military contractor in Iraq, Afghanistan, Kuwait, Jordan and the United Arab Emirates, expressed support for continued U.S. military engagement in the region.

“It’s necessary for our country to — people say we’re the policemen of the world — it’s necessary for us to stem the tide of violence from Islamic radicals and things of that nature,” he told JI. “We need to step back up and show the leadership that has been lacking in the last several years.”

Flowers said he supports rejoining the 2015 Iran nuclear deal, which he said “was working… before we stepped away from the table,” but said the U.S. should “absolutely not” withdraw any sanctions without action first from the Iranians.

McCormack said she was not familiar enough with the issue to comment on it, and both she and Flowers said they are not fully informed about the specifics of the Israeli-Palestinian conflict, but said the U.S. should support negotiations between the two parties. Flowers supports a two-state solution.

As Greene becomes an increasing headache for the House GOP, some have floated the suggestion to change the district’s lines during the upcoming redistricting process so that the congresswoman will have to run against another Republican incumbent to secure reelection. Greene’s district was created as a result of redistricting a decade ago in which Georgia gained one House seat. 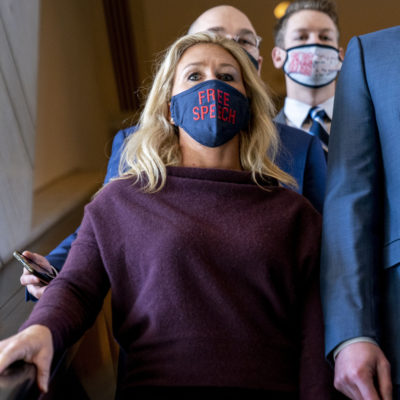 But the University of Georgia’s Bullock believes such an approach would be difficult, given that the northwest Georgia district’s boundaries are partially set by state borders with Tennessee and Alabama. Greene also has not yet become “as much of a problem here in Georgia as she is for the leadership” in Washington, Bullock added.

Even if state Republicans do try to gerrymander her out of Congress, he said, Greene may simply move to another open seat elsewhere in the state — as she did in 2020 in the 14th district, Bullock noted. Attempts by a Republican rival to label Greene a carpetbagger failed in 2020; neurosurgeon John Cowan, who finished second to Greene in the June primary, dubbed her “Atlanta Marjorie,” but ultimately lost by more than 13 points in an August 2020 runoff.

Since the election, Cowan has remained a periodic presence in the media and said in February that he may run again in 2022.

Bullock believes the most viable option for unseating Greene, which he said has been floated by some in the state, would be another conservative candidate running as an independent — bypassing the GOP primary process to appear on the general election ballot — but pledging to join the GOP once elected.

However, Bullock added, “for that to work, you probably would have to also hope that there would not be a Democrat there to split the anti-Greene vote… If she loses, it’s going to be because of what Republicans do and not Democrats.”