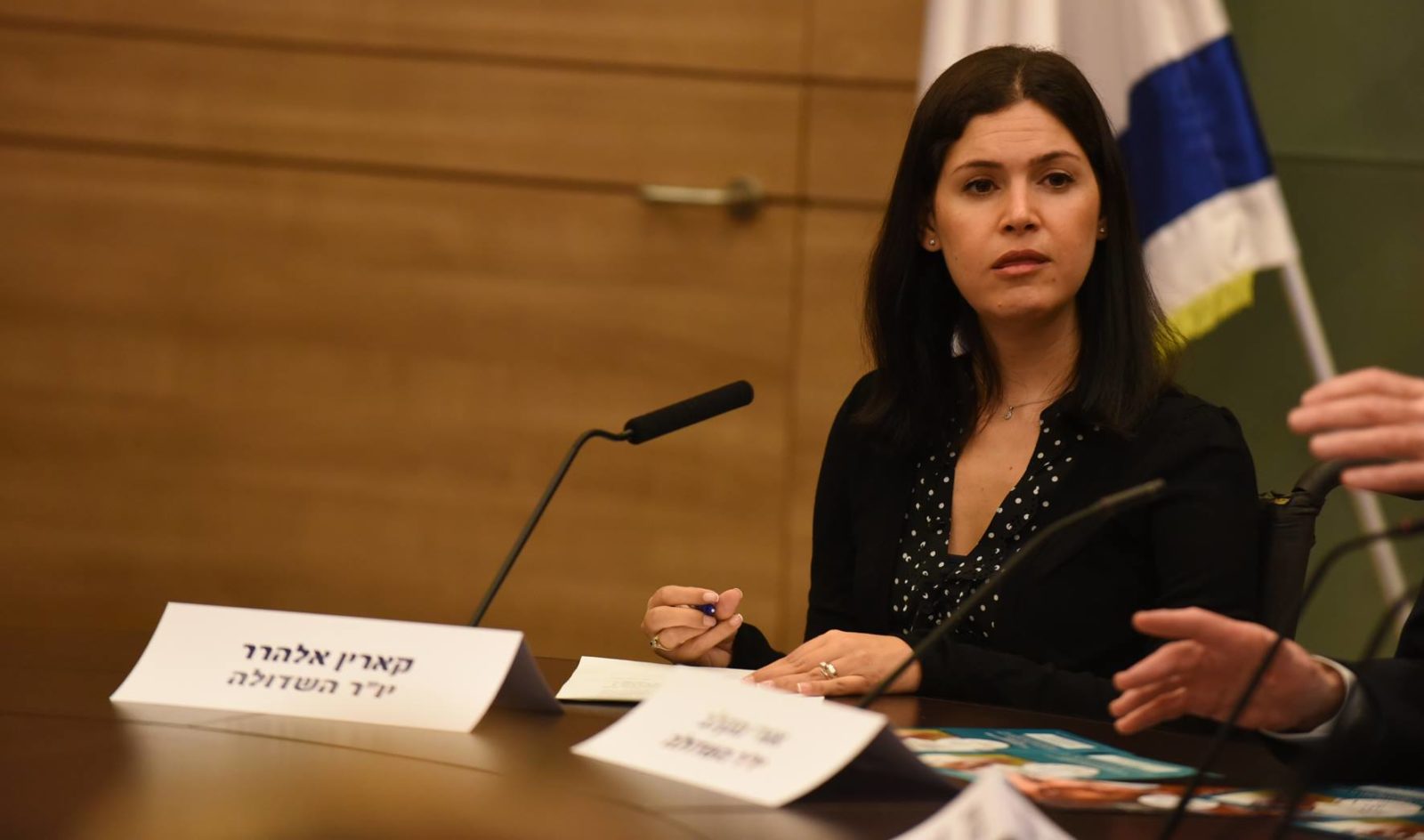 Yesh Atid’s Karine Elharrar is running on a ‘sanity’ platform

On the eve of Israel’s fourth election in two years — and her sixth since entering politics less than a decade ago — Yesh Atid MK Karine Elharrar believes Israel is ready for a change.

“People are tired. They don’t really want to hear from politicians,” Elharrar told Jewish Insider in a recent interview. “And I can really relate to that, and I understand it, because people are tired of [broken] promises.”

One of the most painful broken promises, she notes, is the one that led to the dissolution of the union between the centrist parties Yesh Atid and Blue and White, which had withstood the past three elections. When Blue and White leader Benny Gantz entered the government led by Prime Minister Benjamin Netanyahu last year — despite repeated vows that he would not — the faction split, and Yesh Atid head Yair Lapid remained in the opposition.

“Hopefully this time, after the last election and the fact that we didn’t break our promise, I hope that this time the public will put its faith in us,” Elharrar said, “and we can really succeed in our mission.”

Unlike past elections, she said, “we see that the parties on the right wing are also opposing Netanyahu,” pointing to Gideon Sa’ar’s New Hope and Naftali Bennett’s Yamina. “Hopefully a joint combination between the parties can replace Netanyahu and we can form a functioning government that will take care of all the reforms, the budget, the health, welfare.”

The latest polls show Yesh Atid poised to become the second-biggest party in the next Knesset after next week’s election, predicted to receive 20 seats. And while Lapid is a formidable prime ministerial contender, he’ll face an uphill battle to unite the disparate anti-Netanyahu forces.

Elharrar’s hope, however, is still tinged with concerns that the March 23 vote will lead to yet another coalition deadlock — and a potential fifth election.

“Netanyahu, his main goal is ongoing elections, so he won’t have to face all his legal business,” she claimed, a reference to his trial on corruption charges. “Yesh Atid is all-in for forming a government. And we’re not obsessed that Yair Lapid will be the prime minister. I personally think he’s the right man to do so. He has all the skills, all the qualifications. But what the State of Israel really needs right now is sanity and a functioning government that will take care of all the problems that we are facing.”

Lapid, a former TV journalist and columnist — and the son of former Justice Minister Tommy Lapid — entered politics in 2012 with the formation of his own party, Yesh Atid. In elections the following year, Yesh Atid received 19 seats, and ended up joining Netanyahu’s coalition, with Lapid becoming finance minister. In late 2014, Netanyahu fired Lapid from the coalition, triggering new elections the following year. Since then, Yesh Atid has remained in the opposition, and Lapid has repeatedly sought to replace Netanyahu as prime minister.

Lapid is one of the few party leaders who has not ruled out sitting in a future government with the Joint List, a coalition of Arab-Israeli parties. Elharrar said while she backs such a move, she believes it is unlikely to happen, since the Joint List has generally indicated it would not join any government.

“I don’t have a problem with Arab society in Israel, [though] sometimes their representatives in the Knesset are speaking in a way that I don’t agree with,” she said. “But I can tell you that I have much more disagreements with [Itamar] Ben-Gvir and [Bezalel] Smotrich [of the far-right National Religious Party] most of the time.”

The Joint List MKs “are not really my cup of tea,” she added, “but we have to know how to collaborate with the Joint Arab List. And I think some of them are really serious parliamentarians, and they do great work.”

Elharrar, 43, has been with Yesh Atid since the party’s launch in 2012 and an MK since it first entered the Knesset in February 2013. This time around, she has climbed in the ranks to the fourth slot on this year’s electoral list.

Elharrar, who has muscular dystrophy, uses a wheelchair. Both before and during her time in the Knesset, she has distinguished herself in fighting for the rights of those with disabilities in Israel. The battle today, she believes, is in implementing and enforcing the existing legislation.

“As legislation goes, we are really in a good situation,” she said in terms of accessibility and equal rights for those with disabilities. “The fact is that Israel is not yet accessible, but it’s not because we don’t have the legislation. It’s because the implementation is really bad.”

Where more work needs to be done, she said, is in government payments to those who can’t work or who need financial assistance for medical expenses.

“We still have a long way to go,” she said. “We’re working on that; it’s improving but in baby steps.”

Born to Moroccan Jewish immigrants in Holon, Elharrar studied law as an undergraduate in Israel, and then received her LLM degree from American University Washington College of Law on a scholarship from the New Israel Fund. Her time studying in the United States, she said, was eye-opening.

“It was a great experience for me — I did two internships in Washington and I spent some time at the U.N.” working with groups that specialize in advocating for the rights of people with disabilities, she said. “It was really illuminating to [meet] Jewish people in the Diaspora.”

Elharrar said many Jews she met while in the U.S. felt a disconnect with Israel.

“They don’t feel the attachment that they did before to Israelis,” she said. “My sense is that we are growing apart, and I feel really sorry for that; they are like my brothers, my sisters. The fact that in Israel we don’t recognize all kinds of Judaism, only the Orthodox, it is very alienating. And it shouldn’t be that way.”

To that end, Elharrar welcomed the recent controversial Supreme Court ruling that would recognize non-Orthodox conversions performed in Israel for citizenship purposes.

“I think the Supreme Court ruled well,” she said, noting that for 15 years “the government is dragging on and on and didn’t really want to make a decision. And that’s the business of the court — to give a person or group of people” the ability to seek redress under the law “if the government won’t do that.”

Elharrar said she believes a reset in U.S.-Israeli relations is needed under the next prime minister.

“Netanyahu, he’s always running [with] the Republican Party,” she said. “We saw it related to [former President Donald] Trump, we saw it in the U.S. elections and we saw the payback, Biden’s payback,” she added, speculating about the delayed call to Netanyahu from President Joe Biden after he took office.

“I hope that if we have a change in Israel, we will see [a change] also in relations with the West,” she said. “I think we’ve been alienated from the Democrats, and I think this is a very bad thing.” Elharrar said while Netanyahu speaks of his warm relationship with Biden, “I can tell you we feel the coldness here. And I really hope a change in Israel will allow us to re-warm the relationship with the U.S.”

Yesh Atid has been around for close to a decade, and has faced criticism for never holding a primary for its leadership or electoral slate. Lapid has promised that the party will hold a primary at some point later this year.

But Elharrar says she has some hesitations about the primary mechanism creating the ideal party list. “I can understand that we need democracy, but I really feel that since Israel is a relatively small country… we should really find another system.”

Only one woman leads an Israeli political party in 2021 — Labor’s Merav Michaeli. But Elharrar is hopeful more will follow.

“I hope more women will come to politics,” she said. “It’s a sad thing that we are 51% of society and… we have only at the most 25% of the Knesset.” Greater female participation in government, she said, “will lead to better decision making.”