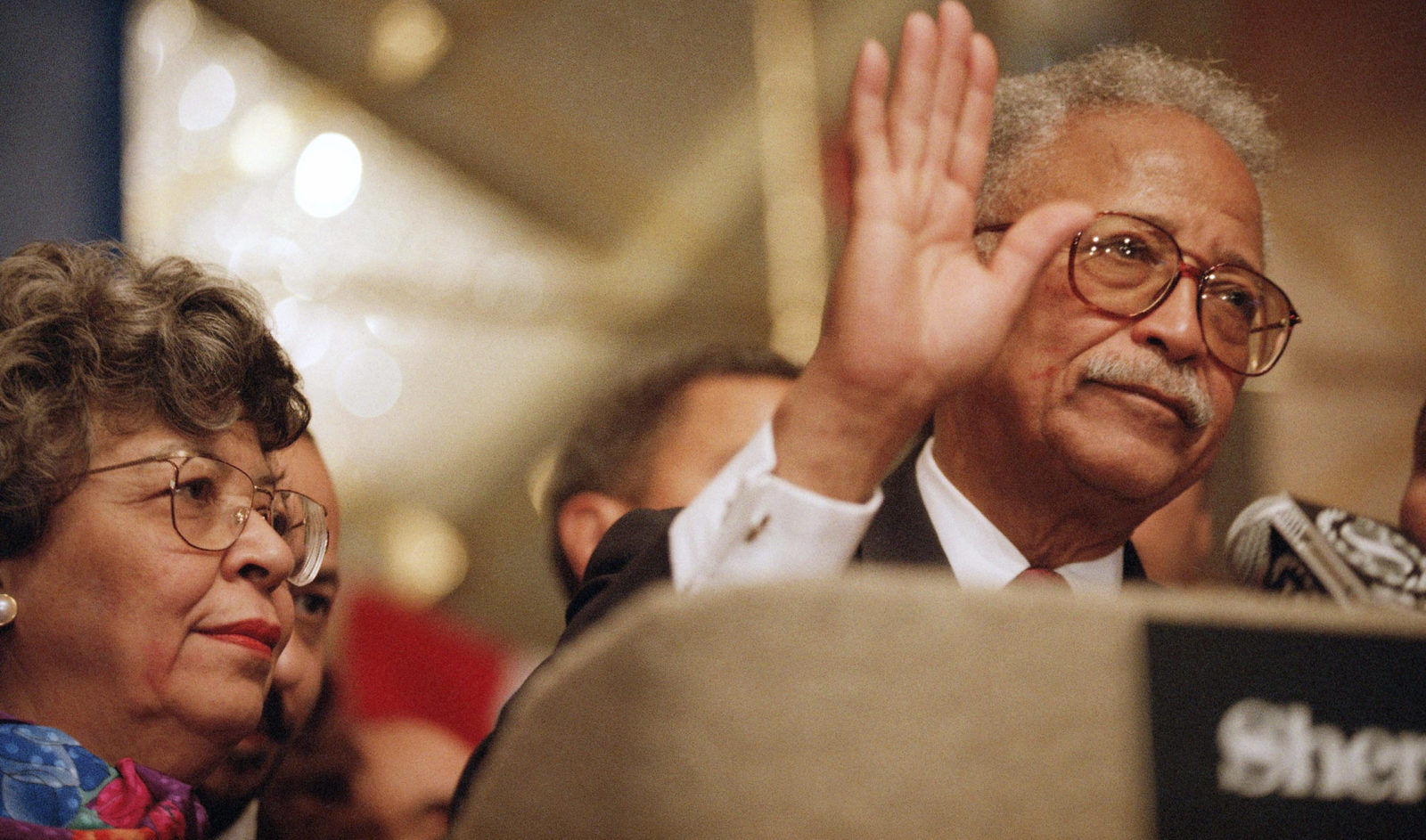 The former New York City mayor, who died on Monday at age 93, had a complex and bumpy relationship with the city's Jewish community

Dinkins, who was the first African American to lead the city, was elected in 1989 after narrowly defeating Republican Rudy Giuliani, who would go on to unseat Dinkins four years later. Prior to his mayorship, Dinkins served in the State Assembly and as Manhattan Borough president. The historic nature of his election was overshadowed by soaring violent crime in the city, as well as his response to the 1991 Crown Heights riot which saw tensions between the Jewish and Black communities erupt.

Herbert Block, the executive director of the American Zionist Movement who served as a close aide to Dinkins since he was elected borough president in 1985, described the late mayor as a “mensch” in an interview with Jewish Insider on Tuesday. Block pointed to the former mayor’s “lifelong relationship with the Jewish community, commitment to Jewish causes and affinity for Israel.”

Dinkins visited Israel three times during his political career, including two trips as mayor, and an earlier visit with the Jewish Community Relations Council of New York. In 1975, Dinkins formed a group of Black leaders who supported Israel, in response to a U.N. resolution equating Zionism with racism. In 1985, while borough president, Dinkins denounced Nation of Islam leader Louis Farrakhan for antisemitic remarks delivered during a rally at Madison Sqaure Garden.

Dinkins was also supportive of the movement to free Soviet Jewry, and took a trip to Helsinki, Finland, in 1988 to protest President Ronald Reagan’s meeting with Soviet leader Mikhail Gorbachev. During his run for mayor, Dinkins had a wing of the Efal Mishan-Histradrut Senior Citizens Home in Tel Aviv named in his honor.

In 1991, during the First Gulf War, as Iraqi Scud missiles were fired at Tel Aviv, Dinkins briefly visited Israel to express his city’s solidarity. He returned to Israel during his reelection campaign in 1993 and met with Jerusalem’s iconic mayor Teddy Kollek, who was facing his own tough reelection bid. Observers panned the four-day trip, calling it politically motivated.

Dinkins’s term was doomed by a series of violent protests in Crown Heights in 1991 — after a vehicle in the motorcade of the late Lubavitcher rebbe, Rabbi Menachem Mendel Schneerson, struck and killed a 7-year-old Black child. The accident led to angry protests and resulted in the fatal stabbing hours later of Yankel Rosenbaum, a Chabad student from Australia. The deaths kicked off three days of riots that injured more than 200 people and caused extensive damage to local property. Jewish leaders in Crown Heights accused Dinkins of restraining the police and allowing rioters to harm the Jewish community in the neighborhood.

Jeremy Burton, executive director of the Jewish Community Relations Council of Greater Boston, who worked for Dinkins at City Hall in the early ‘90s, told JI that while the handling of the riot was “very much a central part of his leadership,” it is impossible to have a “fair accounting” of his mayorship without talking about his decades-long relationships and good deeds. “There’s a lot more to the story of David Dinkins and the Jews beyond Crown Heights,” Burton stressed.

But even before he became mayor, Dinkins’s strong support for Israel didn’t help him gain many votes in the Jewish community. During his 1989 mayoral campaign, Dinkins faced criticism and fierce pushback for his close association with Rev. Jesse Jackson; Dinkins was the New York co-chairman of Jackson’s 1988 presidential campaign. Giuliani capitalized on the criticism and ran attack ads on Dinkins that targeted Jewish voters.

Dinkins nevertheless eked out a win with a margin of 42,000 votes. Less than four in 10 Jewish voters backed Dinkins, compared to the overwhelming support his predecessor, Ed Koch, received in his prior runs. In 1993, Dinkins lost his reelection bid by a little over 40,000 votes. Exit polls showed that Giuliani received close to 70% of the Jewish vote, including nearly 100% of the Orthodox Jewish community.

Burton first met Dinkins as a teenager in 1988, when the then-borough president addressed his congregation at the Lincoln Square Synagogue on the Upper West Side. After the event, the synagogue’s president, knowing that the young Burton was interested in politics, introduced the two. They sat in the backseat of a car and chatted for a couple of minutes, during which time Dinkins offered Burton an opportunity to get involved in his upcoming mayoral campaign. Burton accepted the offer and interned for the campaign, later becoming the deputy director of Jewish community affairs in the Dinkins administration.

Burton recalled Dinkins sitting with his Jewish outreach team after his 1993 loss and examining the exit polls. The numbers indicated a small decline in support — from 37% in 1989 to 33% in 1993 — among Jewish voters. “I will always appreciate and understand those members of the Jewish community who voted for me in 1989 and then looked at my mayorship, looked at where I disappointed them, and said ‘I’m going somewhere else this time,’” Dinkins asked aides to convey. “What I will never fully understand is the part of the Jewish community, who — based on my record before I ran for mayor — never gave me a chance.”

Dinkins was a “true philosemite, a true lover of the Jewish people,” Burton told JI. “And as someone who truly believed in Black-Jewish relations as being integral to his identity and his understanding of his city, he just never really could understand what it was that people wouldn’t bet on him, take a chance on him in the first place. But he certainly understood that he let people down once they did.”

Despite his disappointment, Dinkins kept up relations with the Jewish community. He continued attending local Jewish events and pro-Israel gatherings up until the coronavirus outbreak suspended in-person gatherings earlier this year.

Block, who served as Dinkins’s Jewish liaison, said the former mayor never blamed his loss on the city’s Jewish population and maintained immense respect for the community. “If he had anger or anything against the community, he wouldn’t have kept going to events,” Block explained. Block recounted that a few years ago, Dinkins told him he was attending the funeral of a Jewish person he knew, and out of respect for the family, he donned one of the yarmulkes he had received from Block at a family bar mitzvah. “But as I walked in, I noticed that I was the only person wearing a yarmulke. Nobody else, not the family, not the rest of the crowd had one on,” Block recalled Dinkins telling him. “That was the kind of person he was.”

“He never stopped loving the Jewish community,” Burton told JI. “He still very much loved his attachment to the Jewish community, he loved his relationship with the people in his life who were Jewish. He had great affection. This was not bitterness in the classic sense,” he added. “He really, truly believed in the decency of every human being. If there was a blind spot for him in his leadership it is that he believed that everybody was decent.”

Judith Rubin, former president and chairman of the 92nd Street Y, who served as commissioner for protocol in the Dinkins administration and remained a good friend of the mayor, recalled his presence as a boss.

“I was a city-government novice, but he trusted me to level with him and to stay the course,” Rubin told JI on Tuesday. “It was on-the-job-training as I learned to advise him on which visits were worth his valuable time, and to brief him for them. He usually had lunch in his private office in City Hall and often would call me and say, ‘What are you doing? Come talk to me.’ I’d drop everything and make the five-minute trip to his office.”

Rubin noted the welcome ceremony for Nelson Mandela in 1990 — during Mandela’s first visit to the U.S. after his release from prison in South Africa — as one of the highlights of her work. “Those years weren’t easy, but I wouldn’t have traded them for anything,” she said.

Rubin, who first met Dinkins when he came to speak as borough president at a seniors program hosted by the 92Y, called Dinkins “my mayor” and “a gentleman whose contributions to the city were significant and numerous.”

Professor Ester Fuchs, director of the urban and social policy program at Columbia University’s School of International and Public Affairs, was part of a group of academics who endorsed Dinkins for his second term. Fuchs didn’t meet Dinkins until after his loss, when she helped the former mayor become a professor at Columbia. In 1995, Fuchs helped organize the David N. Dinkins Leadership in Public Policy Forum.

Dinkins once invited Fuchs to the apartment he shared with his wife, Joyce, she recounted. When Fuchs arrived, Dinkins was not home; Joyce explained that the former mayor had gone out shopping. Dinkins returned with a shopping bag of paper plates and plastic utensils because, he told her, he wanted her to feel comfortable as an observant Jew to eat in his home. “He was such a deeply caring and gracious person and he really wanted me to be comfortable,” Fuchs recalled. “To me, it’s emblematic of who he was as a person.”