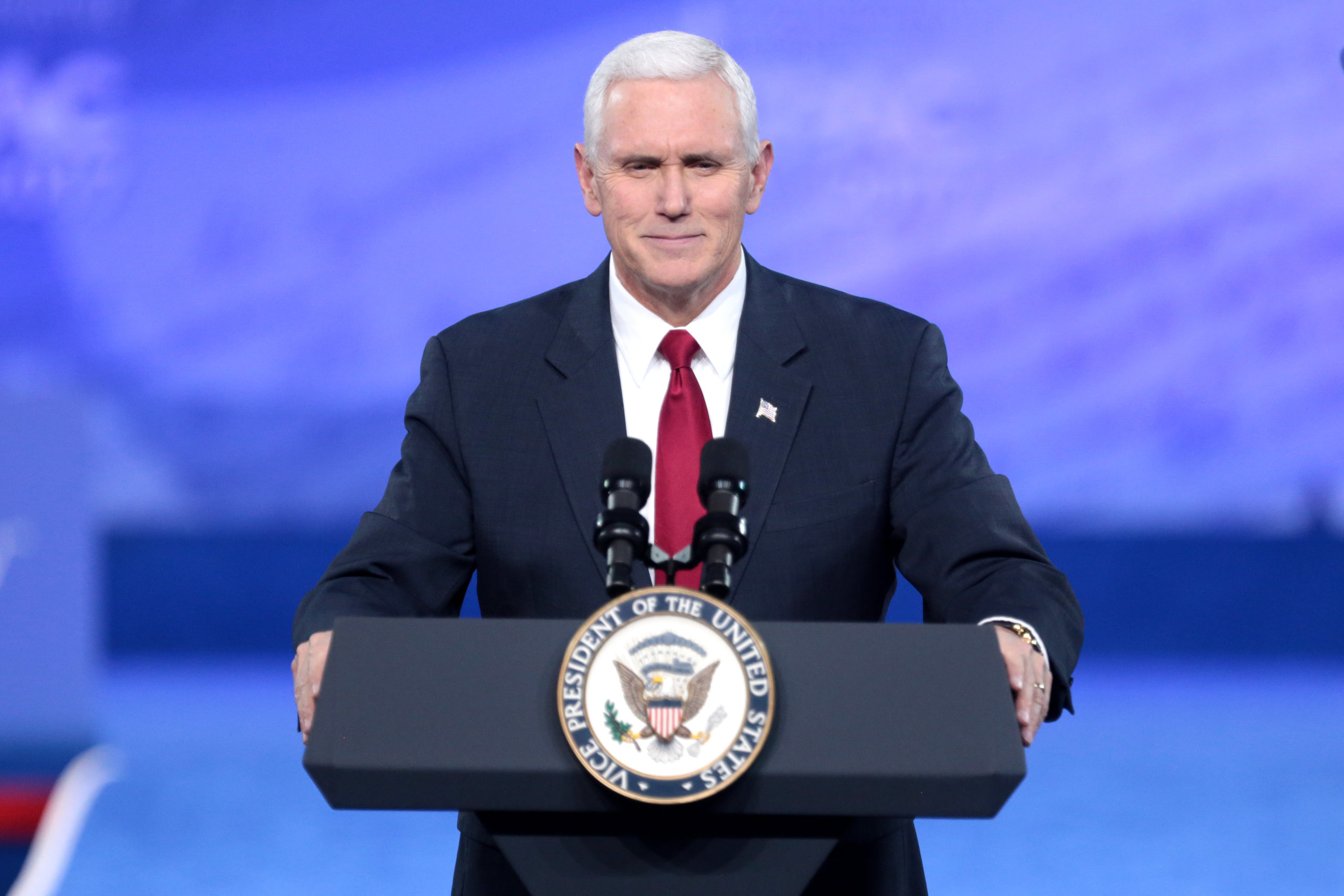 ‘He should challenge Donald Trump for the leadership of the Republican Party,’ says prominent Hoosier Bernard Hasten

As more Republican lawmakers come out in favor of impeaching President Donald Trump for inciting a mob of violent extremists to storm the U.S. Capitol last week — leaving his political and legal future in jeopardy — Vice President Mike Pence has characteristically abstained from taking an active role in the debate.

On Tuesday night, Pence clarified that he had no intention of invoking the 25th amendment and removing Trump from office before his term ends next week, preempting a House vote calling on him to do so. “I will not now yield to efforts in the House of Representatives to play political games at a time so serious in the life of our nation,” Pence said in a letter to House Speaker Nancy Pelosi (D-CA).

It remains to be seen how Pence will move forward with only a week remaining until Joe Biden’s presidential inauguration on January 20. But equally intriguing is what he has planned when leaves his official residence on the grounds of the U.S. Naval Observatory and enters life as a private citizen — a question he has yet to address publicly.

Tom Rose, a Pence senior advisor and chief strategist, deflected an email inquiry from Jewish Insider regarding the vice president’s post-Trump prospects, offering that “perhaps we can communicate when all this is over” — meaning, it seemed, the final chaotic days of Trump’s term.

Yet a number of Pence confidants from his home state of Indiana, where he served one term as governor before joining the current administration, tell JI that they are eager for the vice president to come out of the shadows and assert himself when Trump’s tempestuous run comes to an end.

“Mike Pence can be and should be the next Republican leader, and he should take the bull by the horns and take the reins of the Republican Party,” Bernard Hasten, an Indianapolis businessman and pro-Israel activist who has known the vice president for decades, said emphatically in a phone interview on Tuesday afternoon.

Hasten, whose father, Hart, is one of Pence’s earliest political mentors, added his hope that Pence would make his own bid for the Oval Office — and that he would announce his candidacy as soon as possible. “He should run,” Hasten said.

Over the past four years, Pence has walked a delicate line, positioning himself as the president’s dutiful servant and ever mindful to play his part as right-hand man always just a few steps away from the spotlight occupied by his volatile boss.

But their fragile relationship came apart at the seams last week, when Pence ignored Trump’s demand that he overturn the election results during a joint session of Congress, prompting an accusatory tweet from the president as insurrectionists made their way into the Capitol. The two have apparently only spoken once since the siege.

Forced to choose between Trump and Pence, the vice president’s Hoosier State allies are quick to make their loyalties known.

“He did the right thing,” Bob Shuckit, an attorney who serves as Indiana council chair for AIPAC, said of Pence, whom he describes as a close acquaintance. “I think people respect him for what he ultimately did last week. It was an opportunity for him to demonstrate that, although people may criticize him for doing his job, his job doesn’t lend itself to being a conservative or a liberal.”

“I don’t know what the future holds for him,” added Shuckit, acknowledging an uncertain political landscape that has caused a rift in the Republican Party between Trump’s most ardent supporters and those who are turning away from him after the events of last week. “I hope it leads to more government positions,” he said of Pence’s post-administration future, echoing Hasten’s view that he should set his sights high. “I think that he would be a terrific vice president again or a terrific president.”

Despite such enthusiasm, Leslie Lenkowsky, a professor emeritus in public affairs and philanthropy at Indiana University who has known Pence for 30 years, believes that the vice president will likely slink away from public view after he leaves office and as he makes preparations for his next move.

“My hunch is that Mike will keep his head fairly low for a while,” said Lenkowsky. “He’s not a very wealthy man, and I’m sure he’ll have some offers coming his way, so he might take some of them up in order to earn some money.”

Those offers could potentially include a book deal, an appointment to lead a think tank or perhaps a teaching gig at a prestigious Indiana college like the University of Notre Dame, according to Michael Wolf, a professor of political science at Purdue University in Fort Wayne, Indiana.

But any return to the political sphere would still likely depend on Trump’s standing within the Republican Party — an open question at the moment. “If the base remains so steady with Trump then it’s going to be hard to see the oxygen for him to move forward,” Wolf said of Pence, adding that Democrats could also use his close connection with the president against him in the coming years. “That said, if there’s a turn against [Trump], he’s a name brand and not only that, he’s able to kind of say, ‘I stared Trump down.’”

A barometer of Pence’s political appeal, Wolf argued, may become apparent during the upcoming 2022 midterm elections, when the GOP begins recruiting congressional candidates. “Is he going to be invited anywhere?” Wolf asked. “That, I think, will be the indicator of his future.”

For some Pence partisans, however, the vice president has already proven himself a worthy candidate for the White House. “I think people really want a fighter,” said Allon Friedman, a physician in Indianapolis and the vice president of the Jewish American Affairs Committee of Indiana, who told JI that he would back a Pence bid in 2024.

“He’ll advocate for good policies, Republican types of policies,” said Hasten. “He’ll argue his case for any venue that will listen to him. Hopefully his policies and advocacy will take root with people.”

They certainly took root in the Trump administration, according to Hasten, who claimed to know “first hand” that Pence played a major role in moving the U.S. Embassy in Israel from Tel Aviv to Jerusalem and recognizing Israeli sovereignty over the Golan Heights — signature Trump administration policies he supports.

Shuckit agreed. “I’m confident that he purposely stayed under the radar so that we are unable to say exactly what his role is,” he said of Pence’s purported understated but influential involvement in many of the Trump administration’s major foreign policy achievements in the Middle East, including the normalization deals between Israel and the United Arab Emirates and Bahrain. “But I’m confident that his role was huge.”

“He’s a real friend of Israel, and not just a political friend,” Rabbi Yisrael Gettinger, who leads B’nai Torah, an Orthodox Jewish congregation in Indianapolis, told JI. “I think there’s something about his tie to the country that really comes from his soul.”

“I found him to be a person who we were proud to have as a governor,” Gettinger added. “He was very close to the Jewish community, and particularly the Orthodox Community,” Gettinger said, noting that when Pence would host governor’s mansion parties at which a number of Jews were in attendance, he always made sure that the food was kosher — a gesture the rabbi appreciated.

As political observers speculate about Pence, Lenkowsky made sure to note that his future isn’t confined to the next presidential race, even if many of his supporters hope he will run.

“I think it’s important to remember that Mike is still a very young man,” he said of the 61-year-old vice president. “Well, it may very well be that 2024 will not be the year for him, but 2028 could be. He’s still certainly well within the range given the people we’ve been electing. The real challenge will be how he keeps himself in the public eye between now and if he does decide to run again.”

For Hasten, the answer to that question is simple. “The day after Joe Biden is inaugurated as the 46th president,” he said, “I hope Mike Pence puts his hat in the ring as running for president of the United States.”

Even if Trump declares his candidacy — a possibility that has been repeatedly floated — Hasten emphasized that Pence should still enter the race.

“He should challenge Donald Trump for the leadership of the Republican Party,” Hasten said, suggesting that the time had come for Pence to abandon his subservience to the president. “What is he going to lose?”