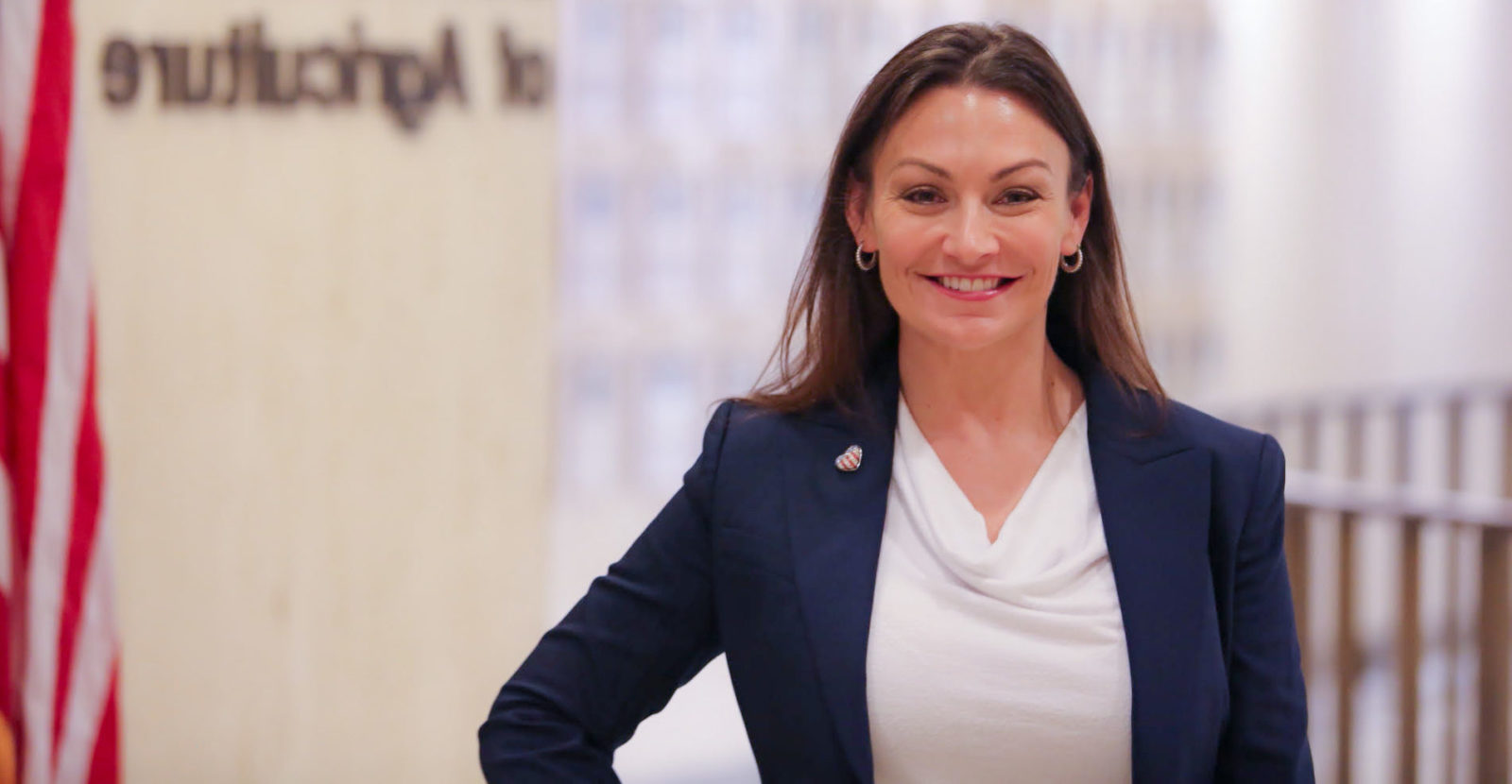 Nikki Fried, the Sunshine State’s agriculture commissioner, is focused on combating COVID but that hasn’t stopped others from speculating about her future

In the summer of 2018, right after Florida’s August primary, a coalition of prominent Democratic donors met in Miami to plot out a November election game plan. Though a number of candidates had been asked to join the event, Nikki Fried — who had just clinched the party’s nomination for the state’s commissioner of agriculture and consumer services — was told she was not invited.

“They didn’t believe I could win,” Fried recalled.

It was a fair assessment, if only because a Democrat had not been elected to the position in 20 years — and there was scant indication that would change any time soon. Nevertheless, Fried — at the time a political neophyte mounting her first bid for elected office — insisted that she be allowed to attend. She got her way, she said, but was not granted permission to speak. “So I just worked the room.”

“She was just not going to take ‘no, we don’t believe you’ for an answer,” said Steven Schale, a Democratic strategist in Florida who has known Fried for about a decade.

Fried has won a number of converts since that meeting, having beaten her opponent, former Republican state representative Matt Caldwell, by a razor-thin margin in the November 2018 race (after a nail-biter of a recount). But she now finds herself in a different sort of hostile territory as Florida’s only statewide elected Democrat during a pandemic that represents arguably the greatest challenge to American life since World War II.

The 42-year-old agricultural commissioner has found that it has been challenging to collaborate with Florida’s Republican Gov. Ron DeSantis, whose response to the pandemic has been characterized by many as haphazard. DeSantis excluded the commissioner from a task force assembled to re-open the state, though before the pandemic, Fried had what she described as a “cordial” rapport with the governor. Now the two currently have no working relationship, according to Fried.

Most of her communication with DeSantis, she said, went through his chief of staff, whom she has known for some time. Currently, she said, “the tension unfortunately seeps down to even the staff levels.” (DeSantis’s team did not respond to a request for comment.)

The friction between the two elected officials has spilled into public view as they have sparred on social media. “He has played partisan politics from day one of all of this, and unfortunately it has caused a significant rift in our two departments,” Fried told Jewish Insider in an interview from her home in Tallahassee, where she is sheltering in place with her fiancé, Jake Bergmann, a former entrepreneur in the medical marijuana industry.

Viewed through the lens of future elections, the governor’s effort to box her out makes some sort of sense given that Fried, a rising star in the Democratic Party, is seen as a potential challenger to DeSantis when his first term expires in 2022.

A cold war with DeSantis notwithstanding, Fried has managed to assert herself in a position that has only increased in relevance as she works to address food insecurity, price gouging, gun safety and agricultural setbacks for farmers, among other pressing issues.

“I realize why I’m here and that I represent a different faction of our state and that I’ve got a responsibility to bring those voices to the table,” Fried said.

“She has really become a real true leader surrounded by a sea of sharks,” said Alan Clendenin, the southern caucus chair of the Democratic National Committee, who is based in Tampa.

Shevrin Jones, a Democratic state representative in Broward County who has known Fried for years, agreed. “I believe that Commissioner Fried is doing a great job leading Florida through this crisis,” he said. “She has found her voice and she has found her way.”

Fried takes that sentiment to heart. “Judaism was always part of my path,” she said. “While I don’t religiously observe every day,” she told JI, “the traditions of taking care of others and the morals that are taught through the Jewish religion and through the culture have gotten me to where I am today.”

Born and raised in Miami, the former attorney and lobbyist was actively involved in the B’nai B’rith Youth Organization and visited Israel several times as a teenager.

“I always had a big open heart for Israel,” said Fried, who says she seriously contemplated making aliyah and joining the Israel Defense Forces while in high school. “They had to be the best when it comes to medicine and space and agriculture, because they can’t rely on their allies around them,” she told JI. “They had to be survivalists and recreate themselves.”

Fried — who was sworn in on the first Hebrew Bible printed in the United States — brought that appreciation to her new position when she embarked on a trade mission to Israel last spring, meeting with dozens of agricultural companies and government officials in an effort to bring some trade insights back to her home state and perhaps facilitate a joint venture or two.

Fried, who worked as a medical marijuana lobbyist before ascending to her current role, believes the cannabis plant is the “future of agriculture” for the state of Florida. Israel, Fried said, has been a leader in marijuana research for years, and on the trip she made an effort to glean some wisdom from local experts.

Klein accompanied Fried on the trip to Israel and helped set up a number of meetings. “She feels very connected to Israel,” he told JI. “She just felt this was a win-win by connecting something she loves on both sides — her love of the State of Israel and Judaism and her ability to do her job as agricultural commissioner.”

A significant portion of the state’s Jewish community lives in South Florida, a Democratic stronghold that stands in stark contrast to the rest of the state. But Fried still had to earn the trust of the rest of the state to make it to office. “Democrats have historically just gotten killed in the rural communities,” she said. “And unfortunately, that would also bode the same thing for Jewish candidates. There is still, unfortunately, some antisemitism that may still linger in our state that would preclude that.”

Justin Day, a Democratic strategist in Florida, grew up in a rural part of the state with a large agricultural population and has friends who are active in the agriculture community. During the campaign, he said, many were skeptical that a woman from South Florida who had never worked in the agricultural industry could represent their interests.

“Being a Democrat in the agriculture industry isn’t easy,” Day averred. “However, I think what many individuals have come to learn is that Nikki brings a pragmatic approach to governing and that she doesn’t shy away from reaching across the aisle for advice or support for an issue.”

It has, of course, been difficult for Fried to reach across the aisle since the governor has given her the cold shoulder. But within her own ranks, at least, she is widely respected. That took work, she said. “It wasn’t like I had been attending annual conventions or going to local clubs,” she said, adding that she spent a substantial amount of time last year building relationships and developing connections within the Democratic Party.

The hobnobbing appears to have paid off. Fried is regarded as a strong contender for the governorship in two years, though she swatted away any speculation about a potential run.

Her name has even been floated as a possible vice presidential pick for Joe Biden, though he has not given any indication that she is on his short list. Fried, who recently hosted a virtual fundraiser for the presumptive Democratic presidential nominee, endorsed Biden in mid-March.

She said she would be honored to serve in a Biden administration. “How can you turn that down?”

Despite her quick rise, some observers say that Fried has a number of obstacles to overcome if she wants to advance to a position above agricultural commissioner.

“Nikki Fried has excited a lot of Democrats in Florida; it’s been a while since they held a statewide Cabinet office and she’s clearly trying to leverage that,” Rick Wilson, a former Republican strategist who is based in Florida, told JI in an email. “She’s personable and smart, but it’s going to still be an uphill climb given Republican political dominance in the state. A lot of her future path is contingent on how the DeSantis handling of the pandemic and the economic chaos to come is viewed by voters.”

For her part, Fried said she is focused on the more immediate tasks at hand. “My job entails not just agriculture, but we oversee all the feeding programs in the state,” she said. “So while schools are closed and over the summer, we are still making sure that every child gets fed, including all the coordination with our food banks across the state.”

She is “cautiously optimistic” that the state’s reopening will work out. “Of course, we need to keep monitoring and keep increasing the amount of testing that we’re doing,” she said. “Because we need to make sure that if we start seeing a spike in an area that we’re able to quickly shut it down before it gets out of control again.”

About a year ago, Fried got engaged, but she has had to put her wedding plans on hold as she works to curb the pandemic, ensuring, among other things, that Florida’s farmers emerge from the crisis in good shape and that “every person in our state has access to food.”

“Those are my priorities,” she said. “And getting married somewhere in there.”