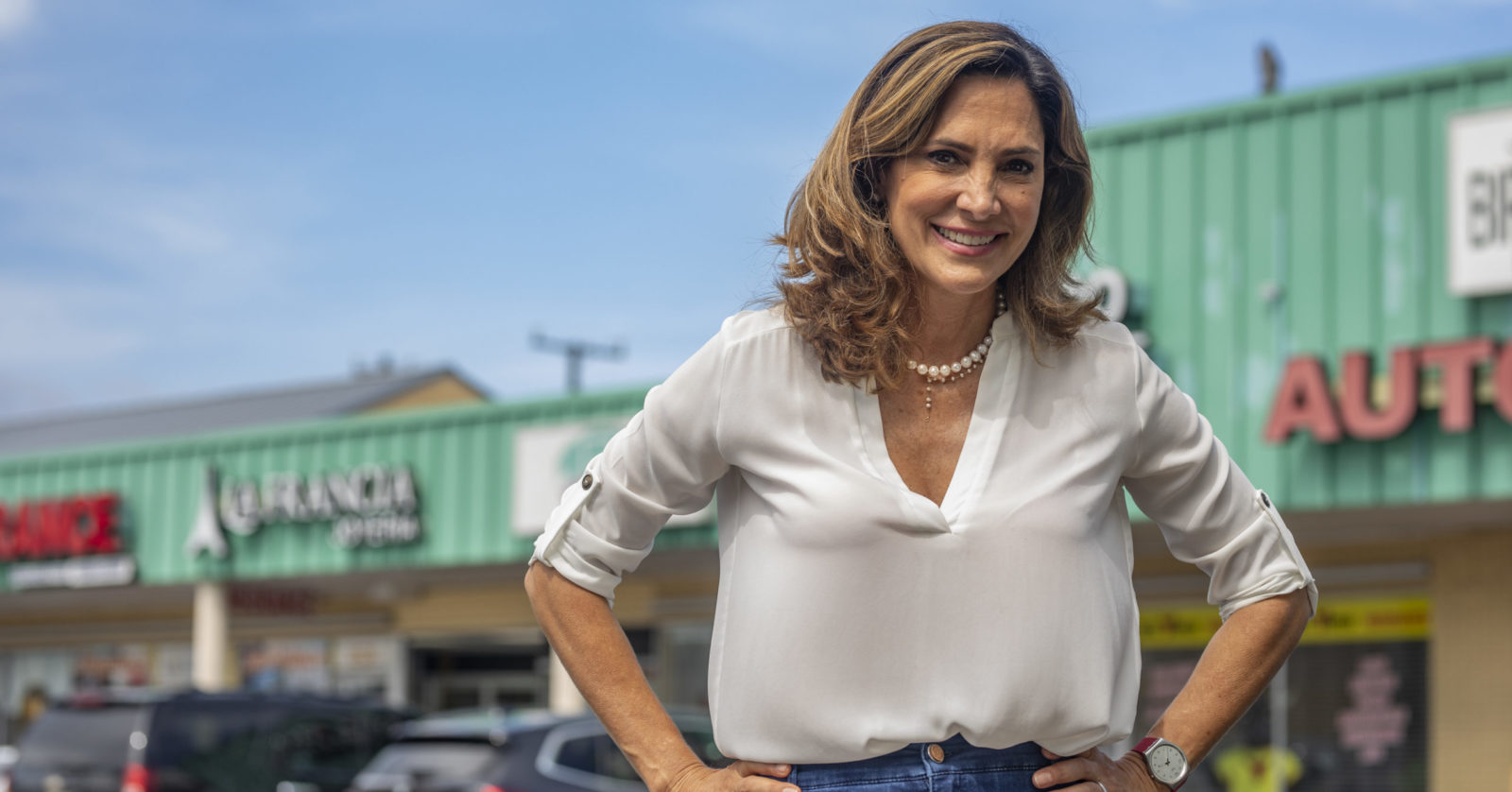 Democratic incumbent Donna Shalala appears to have the edge

Two years ago, Maria Elvira Salazar, a former TV journalist turned congressional hopeful, ran a formidable campaign to succeed retiring Rep. Ileana Ros-Lehtinen (R-FL) in a district of South Florida that many Republicans believed was in play. That she failed to beat now-Rep. Donna Shalala (D-FL), losing by six percentage points, does not seem to have deterred her one bit.

This cycle, Salazar is ready for round two as she vies for a second chance to represent Florida’s 27th congressional district, which sits within Miami-Dade County and includes Miami Beach. “I’m seeing it,” Salazar, 59, said confidently in a recent interview with Jewish Insider. “I know I’m going to get it.”

The Cuban-American Republican — endorsed by President Donald Trump in an effusive tweet last week — has reason to believe she can snatch the seat away from Shalala, a former longtime president of the University of Miami who served as Health and Human Services secretary during the Clinton administration. Outlining her path to victory, Salazar predicts that she will peel away 20% of the vote among Hispanic Democrats while garnering support from a majority of independent voters.

The National Republican Congressional Committee also seems to think that Salazar has a fighting chance despite her previous defeat, having added her to its “Young Guns” program that highlights candidates in competitive races. Last month, the group released a poll placing Salazar three points ahead of her opponent, though still within the survey’s margin of error.

“We had the opportunity to expose who my opponent really is,” Salazar told JI, referring to a recent interview in which Shalala called herself a “pragmatic socialist” in conversation with a local NBC station — a potentially inflammatory pronouncement in a district that is heavily populated by Cuban-American voters who remember Fidel Castro’s communist regime.

“We know that socialism, it means ‘burning hell,’” Salazar said with bombastic flair. “If I can be a voice against that burning hell on the floor of the United States Congress, I will be that voice.”

Shalala, meanwhile, has claimed that she meant to say she was a “pragmatic capitalist” but simply misspoke. “No one believes that in this district,” she told JI. “They know me too long.”

Ultimately, the first-term Democratic incumbent is expecting that she will prevail in a district Trump lost by 20 points in 2016. Most polls — with the exception of some outliers — have given her an edge over her opponent.

In an interview with JI, Shalala, 79, trained her attention on the coronavirus pandemic, which has decimated the tourism industry in her district while imperiling the health and safety of her constituents.

“If you look at the issues in my race, it’s COVID, COVID COVID,” she said emphatically, touting her past experience in health policy as evidence that she is best equipped to take on the virus as it continues to spread. “It’s the president’s mishandling of COVID, and it’s the Affordable Care Act and pre-existing conditions,” she added. “It’s a really important issue.”

“I want a national strategy on COVID-19 to save people’s lives,” Shalala said. “I want leadership from the White House. And I want to support that leadership. I want to save the economy and my community.”

While Salazar alleges that her Democratic opponent harbors socialist sympathies, Shalala shoots back that the Republican has failed to distance herself from QAnon, a baseless conspiracy theory that has gained popularity among a handful of Republican candidates this cycle and which Shalala believes includes antisemitic tropes.

In a recent debate, Salazar claimed to have no knowledge of QAnon when asked if there was any legitimacy to its claims — namely, that a network of Satanist pedophiles controls the political levers.

“I don’t know what that means,” Salazar said with a shrug. “I just know that the threat we have in this country is socialism.”

Shalala isn’t buying it. “The idea that she doesn’t know much about antisemitism is very scary,” she said.

Both candidates say they have developed strong relationships with Jewish community members in the district.

“I’ve been talking to the rabbis,” said Salazar, adding a common Republican refrain that Democrats have failed to stand up to Rep. Ilhan Omar (D-MN), the first-term Minneapolis congresswoman who has been accused of espousing antisemitic rhetoric. “Where is Shalala? Shalala has Miami Beach, one of the most important Jewish communities in the country. Where is she? She has never ever, ever denounced Ilhan Omar.”

“There is no place in our country for antisemitic comments,” Shalala said at the time. “I condemn them whatever the source. To suggest members of Congress are ‘bought off’ to support Israel is offensive and wrong.”

Shalala estimated that she has been to Israel between 20 and 30 times, boasting that she had received three honorary degrees from Israeli universities throughout her career in public education. Though she was detained at Ben Gurion Airport in 2010 while returning from a trip to the Jewish state, Shalala, who is of Lebanese descent, has brushed off the incident as a mere inconvenience.

Her visit last August on a trip with the AIPAC-affiliated American Israel Education Foundation was her first as an elected official.

“Israel felt more fragile than I’ve ever seen it over the years I’ve gone back and forth,” she said with concern. “I think it’s the fact that the technology has gotten more sophisticated, that the reach of Hezbollah has been more dramatic. As much as we’ve strengthened and supported the military of Israel, they’re still surrounded by people, by enemies.”

Shalala demurred when asked if she supported rejoining the Iran nuclear deal, which was abandoned by the Trump administration in 2018. Democratic presidential nominee Joe Biden has pledged to reenter the deal if elected. “It depends on what the version is,” Shalala said. “But I think foreign policy is going to be different under Biden.”

Shalala was less ambiguous on the Trump administration’s recent involvement in forging peace deals between Israel and the United Arab Emirates, Bahrain and Sudan. “I’m supportive of them,” she said, “because anything that will secure Israel I’m supportive of.”

Salazar, who has never visited Israel, was equally quick to express her support of the Jewish state. “I will definitely be an advocate for Israel,” she told JI, adding: “Everything Israel needs, everything Israel gets.”

Asked about the nuclear deal with Iran, Salazar said the U.S. would have to “negotiate something better” but did not go into specifics. “We’ve got to make sure that Iran does not acquire nuclear weapons now, tomorrow or ever,” she told JI, “because we know the chances are that those weapons will be used against the Israelis.”

While Salazar applauded the president’s foreign policy approach in broad strokes, she appeared to be unversed on the Trump administration’s recent involvement in Middle East affairs.

In conversation with JI, Salazar at first suggested that Trump had brokered a deal between Qatar and Israel, which has not occurred, and then struggled to come up with the popular abbreviation for the United Arab Emirates.

JI suggested that she was probably referring to the UAE.

Before she entered politics, Salazar worked as a broadcast journalist for such Spanish-language networks as Telemundo, Mega TV, CNN Español and Univision. During her decades-long career, she interviewed Fidel Castro and Augusto Pinochet, among other consequential figures, and covered world events.

While she is undoubtedly an estimable opponent in a district that was until recently represented by a long-serving Republican congresswoman, experts say Salazar remains an underdog and that Shalala will likely hold onto the seat.

“I think she’s safe,” Rick Wilson, a former Republican strategist who is based in Florida, told JI in an email.

Steven Tauber, a professor of political science at the University of South Florida, agreed, noting that the district’s Democratic tilt as well as Shalala’s incumbency advantage would give her an edge.

He added that there were a few obstacles for Shalala, including her failure to disclose stock transactions after she was elected — a scandal that appears largely to have blown over — and recent reports of relatively low Democratic turnout in the county.

“Overall, it is favorable for Shalala, but it is not a lock,” Tauber told JI.

Shalala, who turns 80 in February, said she would stay in Congress as long as she can remain effective — and as “as long as the people in my district keep reelecting me.”

But Salazar is hoping she can convince voters in the district that they should give her a chance — and that she can capitalize on any of her opponent’s weaknesses as she enters the ring for a rematch.

“If you don’t do politics,” she said, “politics will do you.”