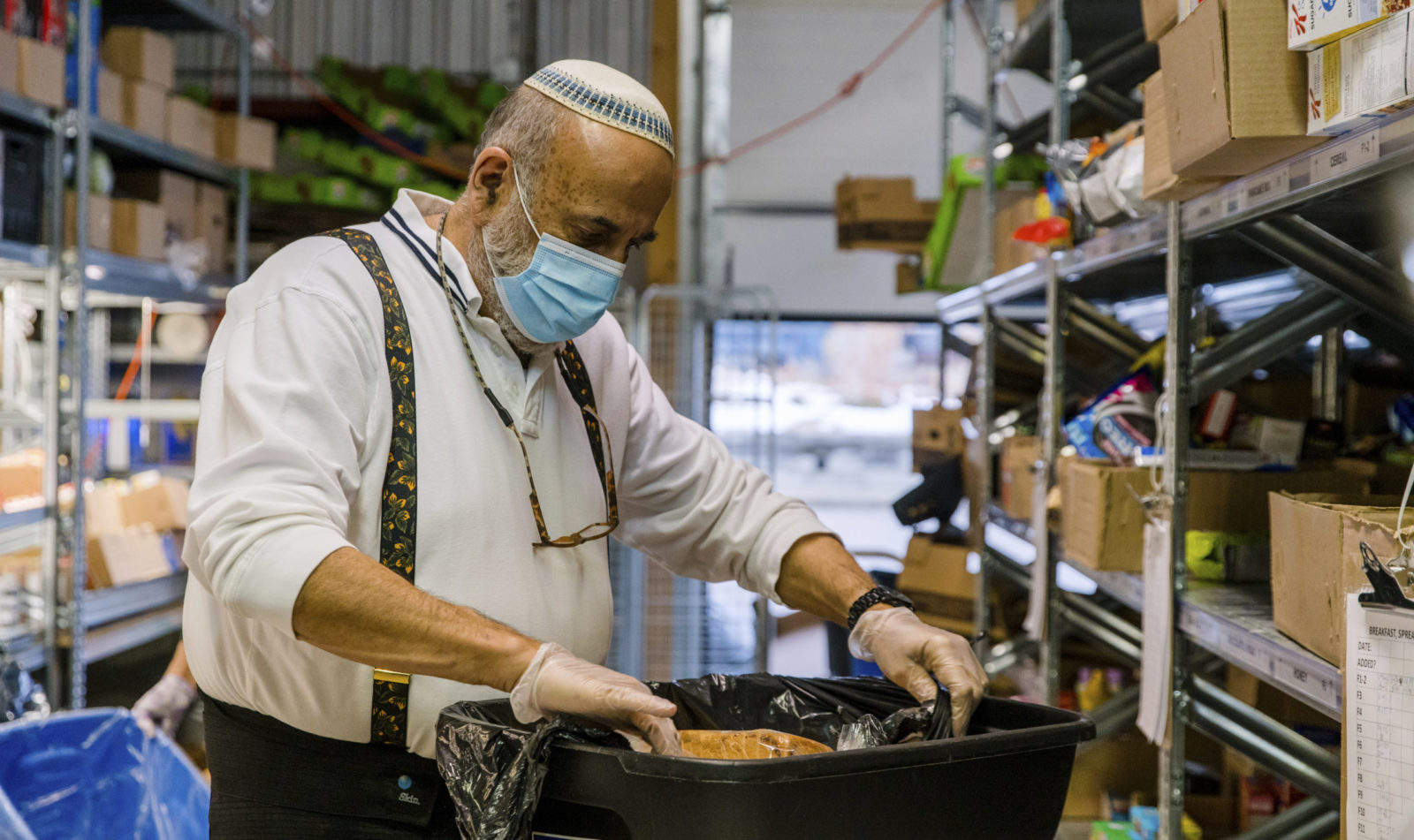 Rising COVID needs force federations to dip into their endowments

As the COVID-19 crisis deepens, some Jewish federations are taking extraordinary steps to find funds to meet the ever-rising needs of local families and institutions suffering from the dire financial impact of the pandemic. A few, including UJA-Federation of New York and the Minneapolis Jewish Federation, are taking more money from their endowments than ever before.

The New York federation has pulled $50 million out of its $490 million in unrestricted endowment funds — far more than at any time since the Great Depression, said Eric Goldstein, the charity’s CEO, in an interview with Jewish Insider.

In the past, the federation has reached into its endowed funds after crises, including 9/11 and Hurricane Sandy, “but never remotely to this extent. There has never been such an impact to our community that this pandemic has had,” Goldstein said.

“It is vitally important” to be cautious in spending endowed money, he told JI. “The more you take from your endowment now, the less you have to draw from in the future.” But the other reason to have an endowment “is to use it for a rainy day. We’ve never seen a downpour like this in our lifetimes,” said Goldstein. “The needs of the moment are staggering” and “are likely to take years to work out of the pandemic.”

To date, the New York Jewish Federation has allocated $64 million in emergency funding for pandemic needs. Of that, $38 million has been distributed as cash grants, and $26 million in interest-free loans. Goldstein explained that the grants and loans have been allocated in a number of ways: food and rent cash assistance through the Metropolitan Council on Jewish Poverty; grants to to 47 Jewish day schools to fund personal protective equipment and air filtration systems; and funds to some 70 other local Jewish agencies.

The Minneapolis Jewish Federation has used $4 million of its $16 million in unrestricted endowment money — the largest amount the federation has ever taken from the endowment for an emergency, CEO James Cohen told JI.

“If we didn’t do that and any part of our community collapsed, it was our obligation to keep us afloat. And $4 million wasn’t close to what we needed to make sure our partners would survive,” said Cohen.

The Minneapolis Federation also started a special fundraising campaign pairing needs associated with the economic fallout of the pandemic with money to beef up security at its Jewish organizations, called Kadima, Hebrew for “forward.” Seventy one percent of the money raised goes to COVID-19 relief, with the balance to security funding.

While the goal is to raise $39 million for Kadima, so far the federation has raised one-third of that amount.

The federation in Minneapolis is also using Kadima pledges in an unusual way: as collateral for a $12 million line of credit it is taking from a local bank. That way, explained Cohen, donors can pay their pledges over three years, but all the money will be accessible to the federation in 2021.

“We have never done anything like this,” Cohen said. “It’s a special time.” The next round of allocations will be decided at the end of January. Requests totaling $3.5 million have already been submitted, he said.

No one knows for certain how much is held in the combined endowments across the continent’s 146 Jewish federations today. The most recent analysis was conducted in 2016, when the amounts held totaled $21 billion, according to Dirk Bird, associate vice president of planned giving and endowment at the Jewish Federations of North America (JFNA).

Endowments are donations meant to be used in perpetuity, with the principal amount intended to remain stable and provide long-term security to the recipient organization, whether it is a Jewish federation, a school, a hospital or a museum. The interest and dividends earned by investing the endowed money produces income that the organization uses as part of its annual spending. Today, Jewish federations typically spend 4-4.5% of their endowment that way, say experts in the field. And many endowed funds — left as bequests in a donor’s will or as a gift during a donor’s lifetime — are restricted to a use specified by the donor. One gift might be restricted solely to provide Jewish day school scholarships, or to provide free funerals for poor Jews in that community.

In an emergency, however, organizations may take more than usual from their endowments, through a process requiring approval by its board of directors. There are no federal legal restrictions as to how much can be used and state guidelines vary, said Don Kent, a principal and financial advisor at Bernstein Private Wealth Management in New York. Kent headed planned giving endowments for 13 years at the Council of Jewish Federations, a JFNA predecessor agency.

Rather than tap their endowments for COVID-19-related needs, many Jewish federations are relying on budget cuts, reallocated resources and emergency fundraising campaigns.

Instead of launching an emergency campaign, the Jewish Federation of Greater Los Angeles “quietly raised over $10 million additional for COVID,” said Jay Sanderson, the federation’s president and CEO. It also decided not to dip into its unrestricted endowment cash reserve of $85 million.

L.A.’s federation has spent $16.4 million on COVID relief so far, Sanderson told JI, with the other funds sourced by cutting the federation’s 2020 operating budget by 10% and redirecting money from cancelled programs, including travel to Israel and conferences around the country. Some $2 million is going to help families send children to camp this coming summer, and significant money is being spent to provide cash assistance and food to L.A.-area Jews through 36 synagogues and two large food pantry programs. More than $2.5 million will be spent on financial aid for day school families who can no longer afford tuition because of layoffs and furloughs, Sanderson said, and $1 million was distributed through 69 child-focused groups to help offset the cost of reopening with COVID safety requirements in place, including funds for protective devices like plexiglass dividers.

The L.A. federation is well-versed in handling serious emergencies, like wildfires and earthquakes. “This pandemic is more serious than the fires,” Sanderson said, at least in terms of the long-term impact. “The pandemic will impact the Jewish community for the next five years, economically, in terms of mental health and otherwise.”

The federation may go back to use more of the $10 million it can tap from its endowment to meet needs of “the long tail to this” pandemic, Tcath said, and to avoid going back to donors. “We have these large donors giving to a JUF 2020 campaign, we then asked them for COVID [relief] and within months were asking them to increase their 2021 gift,” he said. “We’re trying to calibrate going back to them, since it’s not an endless well.”

“We will be allocating additional funds across multiple budget cycles to address “ongoing pandemic needs, through fiscal 2021 and into 2022, he said.

Chicago-area rabbis have been given up to $25,000 each to distribute to congregants who need help paying for food, rent, utilities or medication as well as to local camps to help them survive a year in which they could not operate. JUF is also devoting emergency funds to local social service agencies, and to local organizations that primarily serve non-Jews, like Mt. Sinai Hospital. The hospital received money for needed personal protective equipment and to bolster staff salaries to cover overtime costs, Tcath said.

JUF will try to extend a technical assistance program created earlier this year to help Jewish organizational CEOs with executive coaching, cash management training, marketing and IT and other professional development programs so that it can continue beyond the pandemic, said Tcath. Some pandemic funding went to a pop-up “Food & Chesed Collaborative” in the heavily Orthodox West Rogers Park neighborhood organized by local food distribution groups that don’t usually receive JUF money.

“The focus of the next several months will remain emergency cash and food assistance, increased social services, organizational stability and a significant new bucket — not yet funded through our COVID-19 allocations to date — for mental health needs,” Tcath said.

The Jewish Federation of the Berkshires, located in western Massachusetts, is very small, raising $900,000 in its annual campaign, and serving a local population of about 4,000 Jews. Based in Pittsfield, Mass., the federation has an endowment of $2 million and has not tapped into it to meet pandemic-related needs. It raised $54,000 in an emergency campaign, said its executive director, Dara Kaufman. It also redirected $30,000 of its annual budget to meet COVID-19 needs, and put $18,000 into the assets of the Hebrew Free Loan Society, for it to lend out in interest-free loans.

Some of the emergency funds have gone to help dozens of individuals with essential needs. Recipients were given a $100 food card or up to $1,000 for back rent depending on their need, Kaufman said. Some was also given to non-Jewish food banks in the small rural communities around the Berkshires, she said. Twenty thousand dollars was distributed to local organizations working with immigrant and low-income families.

The Berkshires federation has also created an undesignated reserve fund, Kaufman said. “For a small community we never thought we would need one, but we’re taking this as a learning experience to set ourselves up for any future emergency.”

In Portland, Ore., the Jewish population numbers around 35,000 and there are few “unemployment and poverty issues,” said Jewish Federation of Greater Portland President and CEO Marc Blattner.

The federation has not touched its endowment of $3 million, and even raised $900,000 in a special COVID relief campaign,  on top of the $4 million raised in its most recent annual campaign, he said.

The federation recently took $118,000 from its cash reserves to provide $250 to frontline workers — more than 650 individuals, Blattner said — in local Jewish institutions. The recipients work as health aides in Portland’s Jewish nursing homes, and as teachers and janitors in local preschools and day schools. Another $250 went to each Jewish community employee who was laid off or furloughed because of the financial crisis resulting from the pandemic, said Blattner. Most of the recipients are not Jewish, he said, and “deserve love and care from the Jewish community.”

Houston is unusual among Jewish federations for not having any endowment at all. It is, however, accustomed to emergencies, most recently 2017’s Hurricane Harvey, and at that time established a disaster relief fund. The federation raised $22 million to help the devastated city recover from the storm — several synagogues and many homes are located in what was the hardest-hit area — and some money has remained. The federation took $1 million of that to seed its COVID relief efforts, said Kari Dunn Saratovsky, its president and CEO.

The Houston federation’s annual campaign, which closed in June, raised $8 million, and an emergency campaign, which ended Dec. 31, brought in another $3.4 million. It was run jointly with Houston’s Jewish Community Foundation, Saratovsky said. Roughly $50,000 was immediately given to Houston’s Jewish Family Services agency when the pandemic hit and more has subsequently been distributed to local Jewish agencies to help them weather the financial crisis brought on by the pandemic, as well as to human services agencies providing direct help to individuals in need.

Having an endowment “has not been a priority in Houston. There are a lot of things we’re learning that need to evolve and change,” said Saratovsky. “We are using this moment as an opportunity to accelerate things, and one of them is the endowment.”