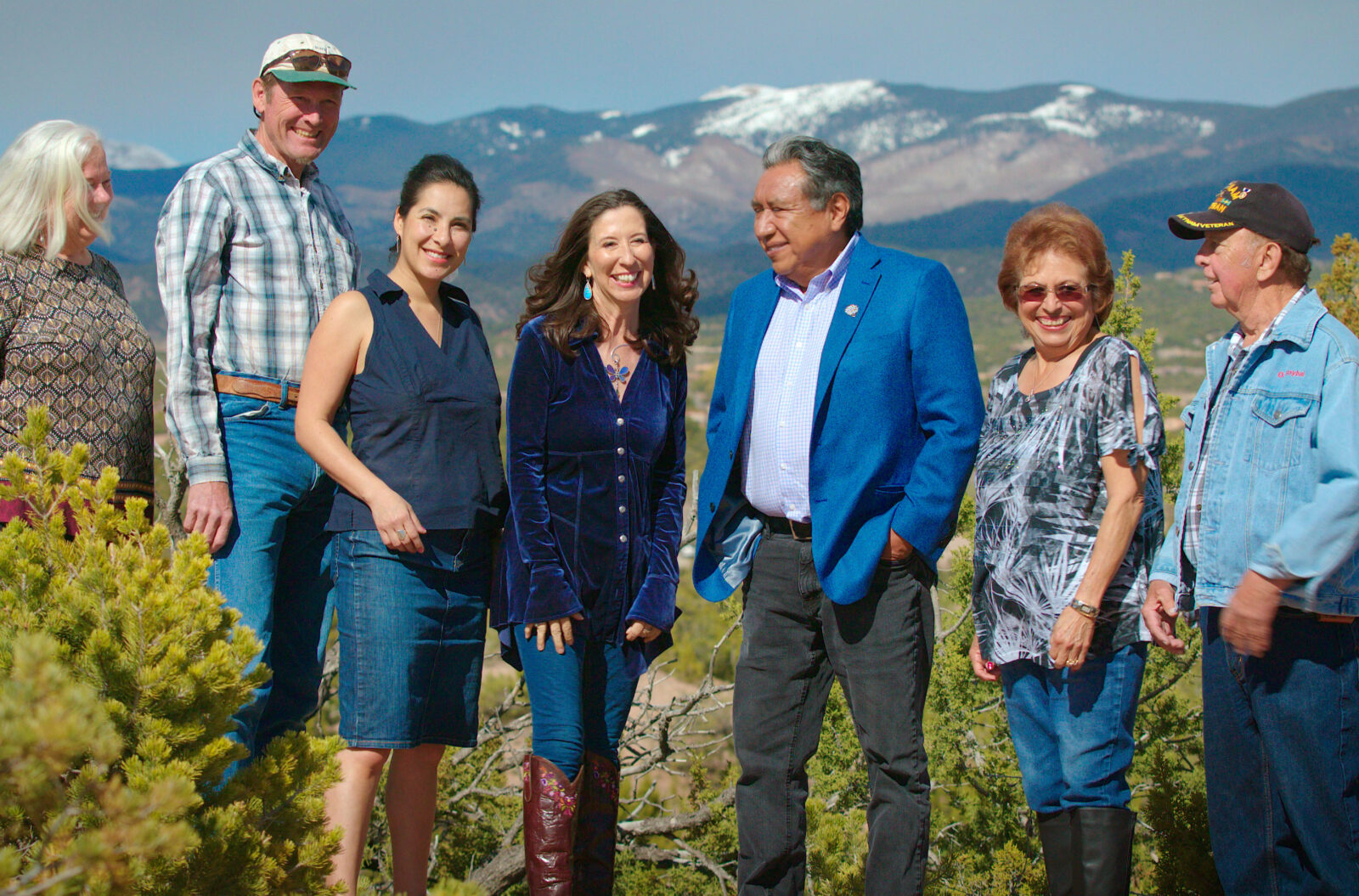 The incoming Democratic congresswoman, endorsed by DMFI and AOC, says her progressive policy positions come from years of experience

On the Friday after Thanksgiving, Teresa Leger Fernandez, the incoming Democratic congresswoman from New Mexico, was wondering aloud about the historical roots of a national holiday, the foundation of which has come to be viewed as something of a myth.

“Thanksgiving really was a proclamation of George Washington,” Leger Fernandez said in an interview with Jewish Insider, noting that Washington’s edict was an instruction to give thanks to an almighty god rather than a friendly meal between Native Americans and English colonists. “I don’t know how it ended up turning into pilgrims.”

For Leger Fernandez, 61, such questions have no doubt been on her mind as she is poised to represent a sizable population of Native American constituents, but with just over a month remaining until she assumes office, the representative-elect is more acutely focused on curbing the coronavirus pandemic — the narrative around which, she said, has received its own form of whitewashing.

“We had a presidency and a Republican Party that was undermining the public health messages,” Leger Fernandez said of the Trump administration’s slapdash effort to contain the virus, as well as some GOP figureheads who have brushed aside public safety guidelines. “I gave a eulogy at the funeral of somebody who died two weeks ago,” she added. “When I go somewhere and QAnon people refuse to wear masks, that is like, you are refusing to express the fact that you care for each other — and that’s not right.”

As President-elect Joe Biden prepares to be sworn in on January 20, Leger Fernandez takes comfort in expecting that his administration will take a more disciplined approach to ending the pandemic, which has claimed more than 266,000 lives. And, looking ahead to her first term in Congress, she is hopeful that the federal government will pass a sweeping COVID relief and economic recovery bill that puts the United States on track to address several of the issues she ran on, such as expanding the renewable energy grid and increasing access to broadband, rural health facilities, affordable housing and early childcare.

“We should make sure that we use that big recovery bill to also address the other inequities we have in our society,” said Leger Fernandez, adding that New Mexico’s cultural economy has been “devastated” amid the pandemic and that creative work was in need of funding much in the same way the New Deal-era Works Progress Administration commissioned murals and other projects. “It is one of those ways of coming to understand each other and recognize that we have many stories in our single American story.”

Leger Fernandez’s story is unique for her state: She is the first woman to represent New Mexico’s 3rd congressional district, which covers the state’s northern portion and includes Santa Fe. The former attorney and Clinton White House fellow served as vice chair of the Advisory Council on Historic Preservation during the Obama administration. She succeeds Rep. Ben Ray Luján (D-NM), who was recently elected to the Senate and whom Leger Fernandez describes as “a great mentor and friend.”

Leger Fernandez, who has never held elective office, won a hard-fought battle in New Mexico’s June primary to advance to the general election in her solidly blue district. Her most formidable opponent was Valerie Plame, the former CIA operative who lives in Santa Fe and was dogged by accusations of antisemitism thanks in part to a tweet three years ago in which she linked to a white nationalist website.

Though Plame apologized for posting the story and later joined a local synagogue while claiming to be “of Jewish descent,” Santa Fe’s tight-knit Jewish community coalesced behind Leger Fernandez, who defeated Plame by nearly 17 percentage points in the primary.

Having beaten her Republican opponent, Alexis Johnson, by more than 17 percentage points in the general election, Leger Fernandez is now learning how to navigate life on the Hill and said she was impressed by the new class of Democratic representatives she met during orientation in mid-November.

“Each of their stories is powerful and moving in their commitment to making change,” she said, noting that she viewed some members as potential allies but that she wasn’t ready to name names just yet. “The key is to stay completely open,” she told JI, “because I expect as I move to the term, the manner in which we are going to ally ourselves with each other will be constantly evolving.”

The representative-elect claims she has found little evidence of intra-party division among Democrats, even as some moderates have sparred with their progressive colleagues over adopting a unified message on issues like police funding and fending off accusations of socialism from Republicans.

“What I hear everybody say is that we have much more unity than the press plays — that when you think about what our values are and the issues that we want to address for the American people, they’re very similar,” she said, alleging that Democrats are wholly in favor of addressing healthcare, climate change and racial injustice but that they may have different ways of approaching those topics. “That’s what I’m seeing.”

While she plans to join the Congressional Progressive Caucus and the Congressional Hispanic Caucus, Leger Fernandez said she had already had “great conversations” with members of the centrist New Democrat Coalition. “You’re seeing that there is a lot of support and working together around issues,” she said, “even though there is some degree of difference within the Democratic Party.”

Leger Fernandez was endorsed by both Democratic Majority for Israel and Rep. Alexandria Ocasio-Cortez (D-NY). In a March interview with JI, Leger Fernandez resisted being characterized as part of the Squad and instead expressed a strong affinity for Deb Haaland, the Democratic congresswoman who represents New Mexico’s 1st district. Haaland, whose name has been floated as a possible interior secretary pick under Biden, brought years of experience in local politics and community organizing when she became one of the first Native American women elected to Congress in 2018, and Leger Fernandez claims that she is in a similar position.

“Many of the points I look at,” Leger Fernandez said, “they may be called progressive, but many others are very rooted in community.”

“Everybody wants finance reform and to end Citizens United and electoral reforms, because we realize that is part of our democratic malaise — our democracy itself needs strengthening, it needs protecting,” Leger Fernandez told JI in a prescient comment last spring. “Well, I’m a voting rights expert. I won the case for ranked choice voting, which is a great way of voting because it I think reflects the community better. I’ve worked to make sure that I fought against voter oppression. I’ve worked to make sure there’s voter access.”

Such experience will serve her well as Trump’s unsuccessful attempts to disenfranchise millions of voters and void Biden’s election win, experts have predicted, could potentially be emulated in future elections.

Given her past work on voting as well as other issues like immigration and civil rights, Leger Fernandez told JI that she was hoping to land on the House Judiciary Committee, but that she would also be interested in joining the House Committee on Natural Resources if there was a seat open. “We have lots of public land,” she said of her district. “I have a big interest in addressing our climate crisis. I also have a lot of experience on dealing with financing and building businesses and using tax credits.”

Despite her experience on several key domestic concerns, the representative-elect is less attuned to foreign policy, though she is expecting to learn more after she takes office. One way she will do that, it seems, is by visiting Israel, a trip she plans to take during her first term in Congress. “I know there are different groups that sponsor trips to Israel, and I’d be open to going on one or more of those trips, because I take that they would provide different perspectives,” she said. “I look forward to it.”

In a position paper published during her campaign, Leger Fernandez expressed her support for a two-state solution to the Israeli-Palestinian conflict while rejecting the Boycott, Divestment and Sanctions movement known as BDS, alleging that it contributes to antisemitism. The representative-elect also said she would have voted in favor of a House resolution last year opposing the BDS movement.

“We must stay focused on America’s role in bringing both parties back to the negotiating table and on the core objective of creating the conditions for a productive peace process,” she wrote. “As a New Mexican, I am also very aware of the value of the U.S. and Israel’s economic partnerships — including directly between Israel and New Mexico itself. In fact, Israel is one of New Mexico’s biggest trade partners, and a top export market for our state.”

Leger Fernandez supports rejoining the Iran nuclear deal — a goal of the Biden administration — but she makes no claims to being well-versed on the matter and was hesitant to discuss it in-depth. “I am not an expert on nuclear nonproliferation or on the Iran deal,” she said, adding that it was “a mistake” for Trump to pull out in 2018 and “that making progress towards arms nuclear reduction was important.”

More broadly, Leger Fernandez said she viewed Biden’s foreign policy team — including Tony Blinken and Jake Sullivan — as encouraging for those who believe that the United States has abandoned its allies abroad and that the president-elect will usher in a new era of multilateral diplomacy.

“Working collectively is how we address the multiple crises,” she said, “from nuclear nonproliferation to addressing global pandemics to addressing climate change.”

Leger Fernandez, who flew back to Washington, D.C., on Sunday night for another week of orientation, said she has been having conversations with Biden’s transition team on “issues and ideas,” but she declined to elaborate on the specifics of those talks. “I think it’s too early,” she told JI, “but the wonderful thing is we know they’re going to be open to addressing a range of the issues that Trump left behind.”

Even with the fate of the Senate majority dependent on two Georgia runoff elections, Leger Fernandez was still hopeful that legislators would be capable of passing bills on issues such as infrastructure, climate change and the pandemic simply because Biden will be in the White House.

“Now they are going to have the backing of the administration, and the president will be explaining to the American public the importance of this kind of legislation,” she said. “Hopefully, that’s how we will get things done.”