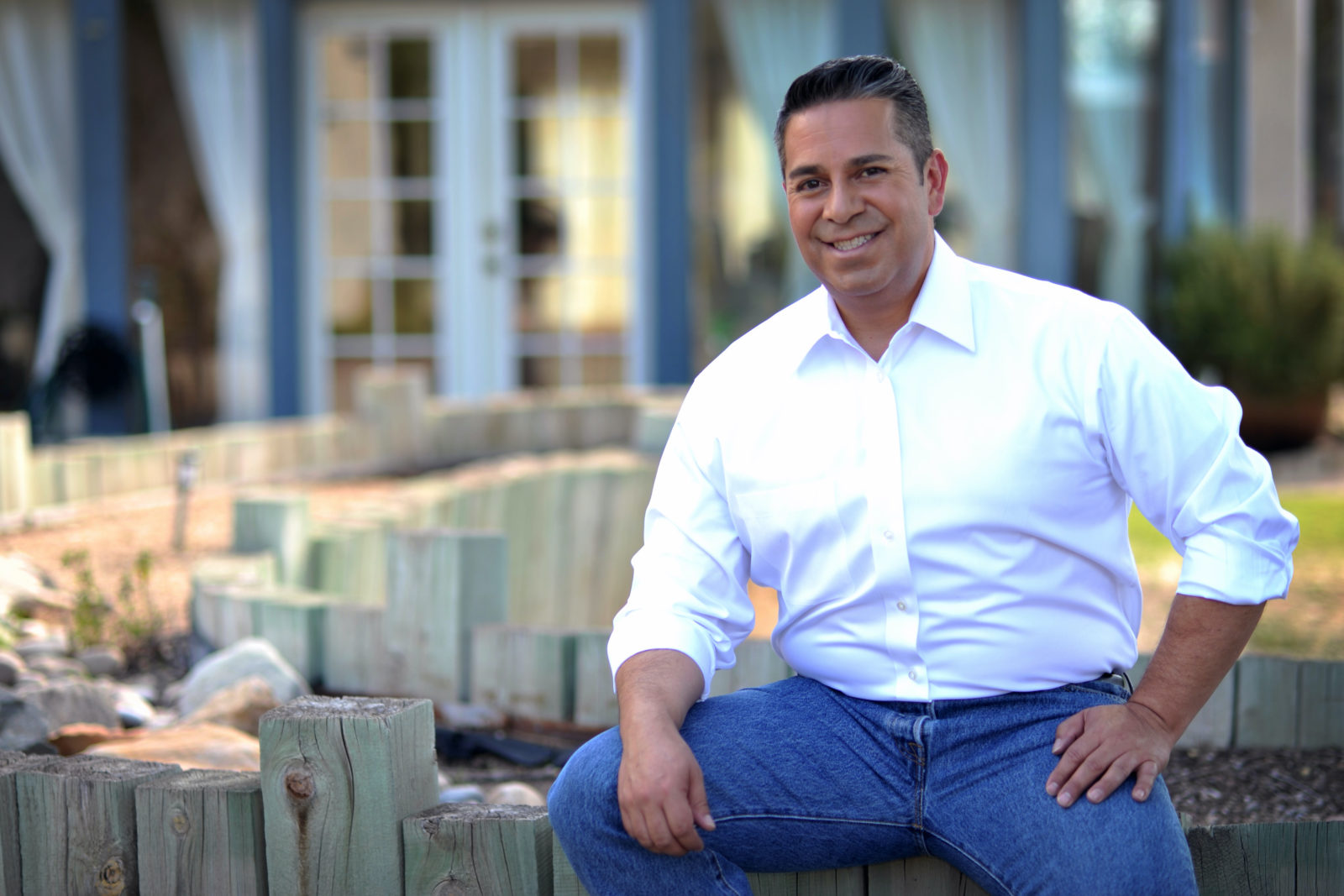 The New Mexico congressman setting his sights on the Senate

When Rep. Ben Ray Luján (D-NM) decided that he was going to run for a seat in the Senate, the first thing he did was ask his mother — “the matriarch of the family,” as he put it — for her blessing. After she gave him the nod, the second thing Luján did was have a frank conversation with House Speaker Nancy Pelosi (D-CA).

As the assistant Democratic leader, Luján, 47, has developed a close relationship with the Speaker since he was elected to represent New Mexico’s 3rd congressional district, which covers the northern half of the state, more than a decade ago. Though Pelosi was disappointed to see him go, Luján recalled, the powerful California lawmaker was ultimately supportive of her younger charge — who, as the former chairman of the Democratic Congressional Campaign Committee, helped secure a Democratic House majority two years ago.

“During the 2018 cycle and under the threat of a gerrymandered map, Congressman Ben Ray Luján led our House Democrats to an astounding majority not seen since Watergate,” Pelosi said in an enthusiastic statement to Jewish Insider.

Luján is optimistic that his party can also flip the Republican-controlled Senate in November. “As we get closer to Election Day, the numbers are only getting better for Democratic candidates,” Luján told JI in a recent phone interview from his home in Nambé, New Mexico, about 20 miles north of Santa Fe.

Luján has raked in more than $5 million in donations, according to the Federal Election Commission, as he runs unopposed in the June 2 primary to succeed outgoing Sen. Tom Udall (D-NM), who announced last spring that he would retire at the end of his term.

The seat Luján is vacating is more hotly contested. Progressive attorney Teresa Leger Fernandez squares off against former CIA officer Valerie Plame on Tuesday, and though Leger Fernandez has the lead — according to a recent poll commissioned by Emily’s List, which has endorsed her — experts predict the race will be a close one.

For his part, Luján has stayed away from the race, even as Bold PAC, the fundraising arm of the Congressional Hispanic Caucus — of which Luján is a member —  has spent $425,000 in advertising to support Leger Fernandez. Luján said he was not planning to make an endorsement. “We have some great candidates that are running,” he said when asked for his assessment of the primary. “I think that we’re going to have a great member of the U.S. House of Representatives serving in this congressional district.”

Politically active members of New Mexico’s Jewish community, who have expressed alarm over the prospect of a Plame victory, have no such reservations about Luján. They described him as a staunch ally who has always made himself accessible and who has often shown up to the annual Hanukkah celebrations at Santa Fe Plaza.

“He made a point of it, always coming by, sharing a few words, lighting the shamash,” said Rabbi Berel Levertov, the spiritual leader of Chabad’s Santa Fe Jewish Center. “He always stayed in touch.”

Halley Faust, chairman of the pro-Israel organization Santa Fe Middle East Watch, was more effusive in his appraisal. “Ben Ray Luján has been the most responsive and respectful congressman I’ve known over the 42 years I’ve been lobbying and working with members of Congress,” he told JI in an email. “He has an excellent relationship with the Jewish community, and has an excellent pro-Israel record.”

The only area where Faust took issue with Luján’s approach to foreign policy was over the congressman’s support for the Iran nuclear deal. But while Faust disagreed with Luján, he still appreciated the level of thought and deliberation the congressman put into making his decision.

“From my perspective, what was particularly important is that he engaged me and others from the pro-Israel community in the discussions,” Faust recalled. “And though he chose to vote against my position, I felt engaged and heard by him. This was a reinforcement of my feeling that he always is responsive and respectful.”

Luján maintains that the deal was worth supporting. “I believed then, and continue to believe today, that the plan represents the most responsible option to hold Iran accountable and halt its pursuit of nuclear weapons,” he told JI. “Now, I want to be abundantly clear as well — Iran remains a threat to our allies and to our interests. And so I’ll continue to monitor that and move forward in that regard.”

Luján’s mastery of Middle East geopolitics has been a process, according to Levertov, who said the congressman knew little about Israel early on in his tenure in the House. “But he was very eager to listen and hear, and as time went on it was clear that he was learning and following up,” said the rabbi.

Luján made his first trip to Israel in 2017 on a trip led by Rep. Steny Hoyer (D-MD). He said it was an “eye-opening” experience. “It just helps put everything into perspective, of proximity, how close everything is,” he said of a visit to the Golan Heights, where he recalled hearing “the crack of gunfire and explosions” as he looked out on the Syrian border.

The congressman supports a two-state solution and believes the prospect of annexation in parts of the West Bank, which Israeli Prime Minister Benjamin Netanyahu has said could take place as soon as July, would move Israel further away from that goal.

Though Luján was critical of Trump, he said it was a positive step that the president’s peace plan, released in late January, made room for a two-state solution even though it did not involve the Palestinians in its conception. “Where I focus my time is ensuring that President Trump keeps his word in that area and that we further work together to get to a two-state solution,” he said.

“The U.S.-Israeli relationship is strongest when the bonds transcend political lines,” Luján averred. “And there’s an effort to cast the unbreakable bond between the two countries into a partisan fight that needs to be rejected.”

Luján, a co-sponsor of last year’s House resolution condemning the Boycott, Divestment and Sanctions movement, believes efforts to delegitimize Israel are counterproductive to the goal of achieving a two-state solution.

“That’s why I strongly oppose it and will continue to do so in the United States Senate if I’m fortunate to serve there,” he said. “There’s a place for legitimate criticism of foreign governments, but people should be mindful of the long and ugly history of antisemitism directed toward Jewish people and the State of Israel.”

Luján sees some commonalities between his home state and Israel, which have long had a robust trade relationship. He said he had learned, for instance, about drip irrigation initiatives in Israel, where water resource management is a priority, as it is in New Mexico.

When it comes to local concerns, Luján — who supports Medicare for All — wants to increase access to affordable healthcare and expand broadband connectivity in his state, among other issues.

Rep. Tony Cárdenas (D-CA), chairman of Bold PAC, described Luján — the highest-ranking Hispanic member of Congress, whose father was speaker of the New Mexico House of Representatives — as a “trailblazer” who “has been relentless in his fight to improve the lives of hard-working families.”

“He is protecting health care for people with pre-existing conditions, lowering prescription drug prices, standing up against Trump’s family separation policy, fighting against Republicans’ attacks on our environment, and much more,” Cárdenas said in comments to JI. “In the U.S. Senate, Luján will continue to champion the priorities and values most important to New Mexico.”

As the Democrats strategize to win a Senate majority this cycle, they are hoping to flip four Senate seats in battleground states like Arizona and North Carolina. While New Mexico is a Democratic stronghold, and Luján’s prospects are very much not in doubt, he believes his Senate bid is key to flipping the upper chamber in November.

“It begins by winning this seat here in New Mexico,” said Luján. “We can’t win back the majority without holding this seat.”