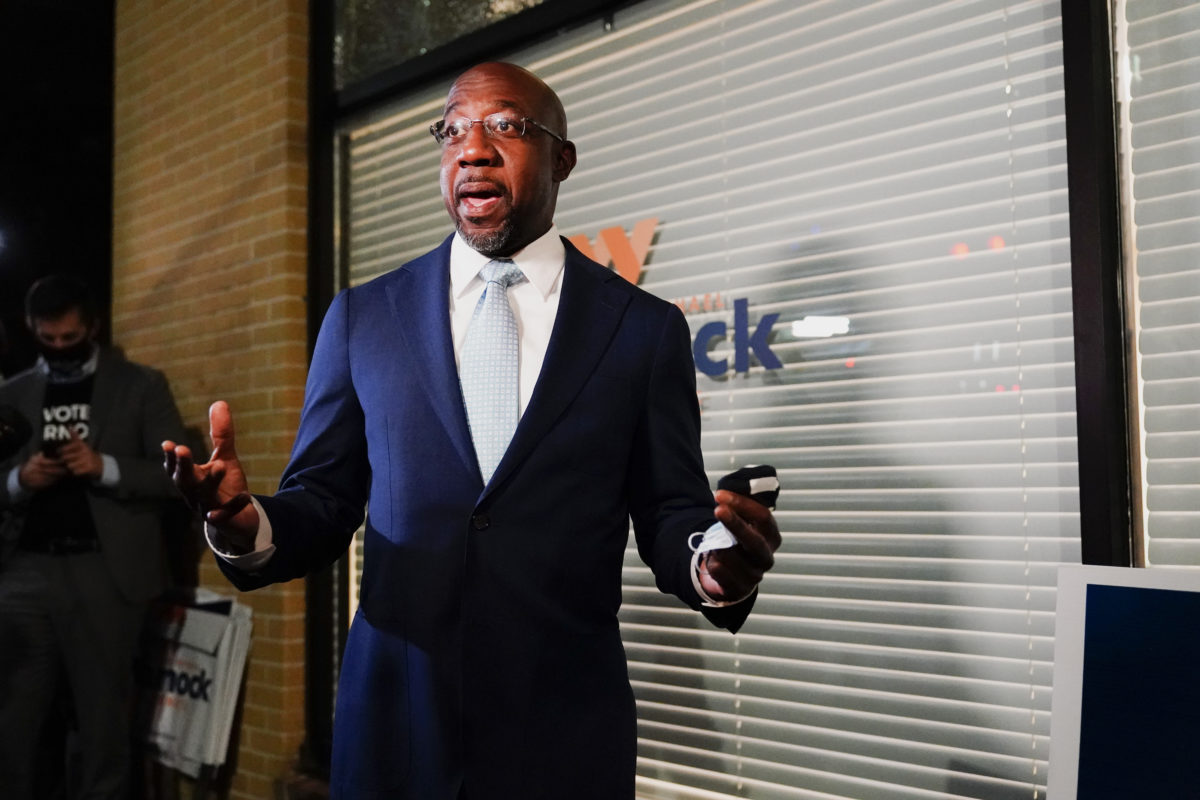 Raphael Warnock, a Democratic candidate for the U.S. Senate, speaks to supporters and media before a rally on Nov. 3, 2020, in Atlanta.

A group of nearly 200 rabbis and faith leaders signed a letter defending Rev. Raphael Warnock, the Democratic nominee for Senate in Georgia’s special runoff election, after he came under fire for his past comments, including a 2018 sermon in which the pastor accused Israel of shooting down “unarmed Palestinian sisters and brothers like birds of prey.”

The letter, which was shared exclusively with Jewish Insider ahead of its release on Tuesday, references Republican attack ads against Warnock after video of the sermon began to circulate online. In 2019, as reported last month by JI, Warnock signed his name to a statement likening Israeli control of the West Bank to “previous oppressive regimes” and calling the “heavy militarization of the West Bank, reminiscent of the military occupation of Namibia by apartheid South Africa.”

“As rabbis and religious leaders, we recognize and respect the devotion to his Christian faith that underlies Rev. Raphael Warnock’s strong support for Israel and his partnership with the Jewish people,” reads the letter, spearheaded by the Jewish Democratic Council of America. “Rev. Warnock recognizes that being a true friend also means being a truth-teller who does not shy away from hard conversations, and he has made no secret of his strong reservations and concerns over Israeli settlement expansion, which may impede prospects for a two-state solution to the Israeli-Palestinian conflict.”

Warnock is senior pastor of the Ebenezer Baptist Church in Atlanta, where Rev. Martin Luther King, Jr., previously served as a co-pastor.

The letter’s signatories — who specified that they were not endorsing any candidate — suggested that racial bias could be driving the “baseless claims and attacks” targeting Warnock. “We abhor the politics of dividing traditionally marginalized communities in order to consolidate political power,” the letter states.

JDCA board member Michael Rosenzweig, who resides in Atlanta, said the letter shows “that Jewish faith leaders understand that history and stand with us. We know the truth and we won’t let others divide us.”

In an editorial recently shared with JI, titled “I Stand with Israel,” Warnock writes: “Without reservation, you can count on me to stand with the Jewish community and Israel in the U.S. Senate.” Warnock detailed his position on a number of issues, including his support for the 2016 Memorandum of Understanding, his rejection of conditioning financial aid to Israel and his hope that a two-state solution can be achieved.

Republican Jewish Coalition executive director Matt Brooks told Jewish Insider the letter is a “sad attempt by members of the Jewish community to give a hechsher [rabbinical certification] to Rev. Warnock, who is far from kosher on the critical issues that the Jewish community cares about.”

Brooks added that “it’s reminiscent to have the same group of apologists who said that we have nothing to worry about people like [Reps.] Ilhan Omar (D-MN) and Rashida Tlaib (D-MI), who have proven themselves to be the most anti-Israel, pro-BDS members of the House. The Jewish community in Georgia will clearly see through this partisan effort to paper over Rev. Warnock’s long-standing attacks against Israel and his association with Rev. [Jeremiah] Wright.”

Read the text of the full letter below:

As rabbis and religious leaders, we recognize and respect the devotion to his Christian faith that underlies Rev. Raphael Warnock’s strong support for Israel and his partnership with the Jewish people. As the Senior Pastor of Ebenezer Baptist Church, Dr. Martin Luther King, Jr.’s church, Rev. Warnock is deeply involved in the interfaith community and works with rabbis and religious leaders of all faiths in recognition of our shared values. We stand with Rev. Warnock and reject the baseless claims and attacks targeting him amid this Senate election. We are also deeply concerned about the possibility that racial bias is driving these false accusations, which we reject in the strongest possible terms.

Rev. Warnock has stated that the histories of oppression shared by the Black and Jewish communities, which includes Black Jews living as members of both communities, guide him in his embrace of Dr. Martin Luther King, Jr.’s declaration that “Israel’s right to exist as a state in security is incontestable.”

Rev. Warnock recognizes that being a true friend also means being a truth-teller who does not shy away from hard conversations, and he has made no secret of his strong reservations and concerns over Israeli settlement expansion, which may impede prospects for a two-state solution to the Israeli-Palestinian conflict.

At the same time, Rev. Warnock is strongly opposed to the global boycott, divestment and sanctions (BDS) movement “and its anti-Semitic underpinnings, including its supporters’ refusal to acknowledge Israel’s right to exist.” He supports the unprecedented, ten-year, $38 billion aid package finalized with Israel by the Obama-Biden administration. He supports a two-state solution rooted in the protection and security of Israel’s borders, its identity as a Jewish, democratic state, and a commitment to improving the quality of life for both the Jewish and Palestinian people.

Rev. Warnock has made clear that claims that he believes Israel is an apartheid state are “patently false.” In his own words, “I do not believe that.” Rev. Warnock has made his views on the Israeli-Palestinian conflict clear. He has stated, “while I am deeply concerned about injustices impacting the Palestinian people…I know that no singular country’s actions are perfect, including Israel’s – and yet the country is a true friend and our strong, democratic ally in the region.”

We sign this letter not as an endorsement of a particular candidate, but a rejection of false and divisive slander entering our community.

All Americans, especially Jewish Americans, should reject attempts to divide the Black and Jewish communities, which includes part of the Black community, by spreading falsehoods about Rev. Warnock. We abhor the politics of dividing traditionally marginalized communities in order to consolidate political power. The friendship between Jewish clergy and Black Christian clergy has stood strong for justice for generations, and cannot be so easily broken by bad faith actors who care little for our communities.

We stand with Rev. Raphael Warnock against these attacks, and implore other Jewish leaders to stand with us.