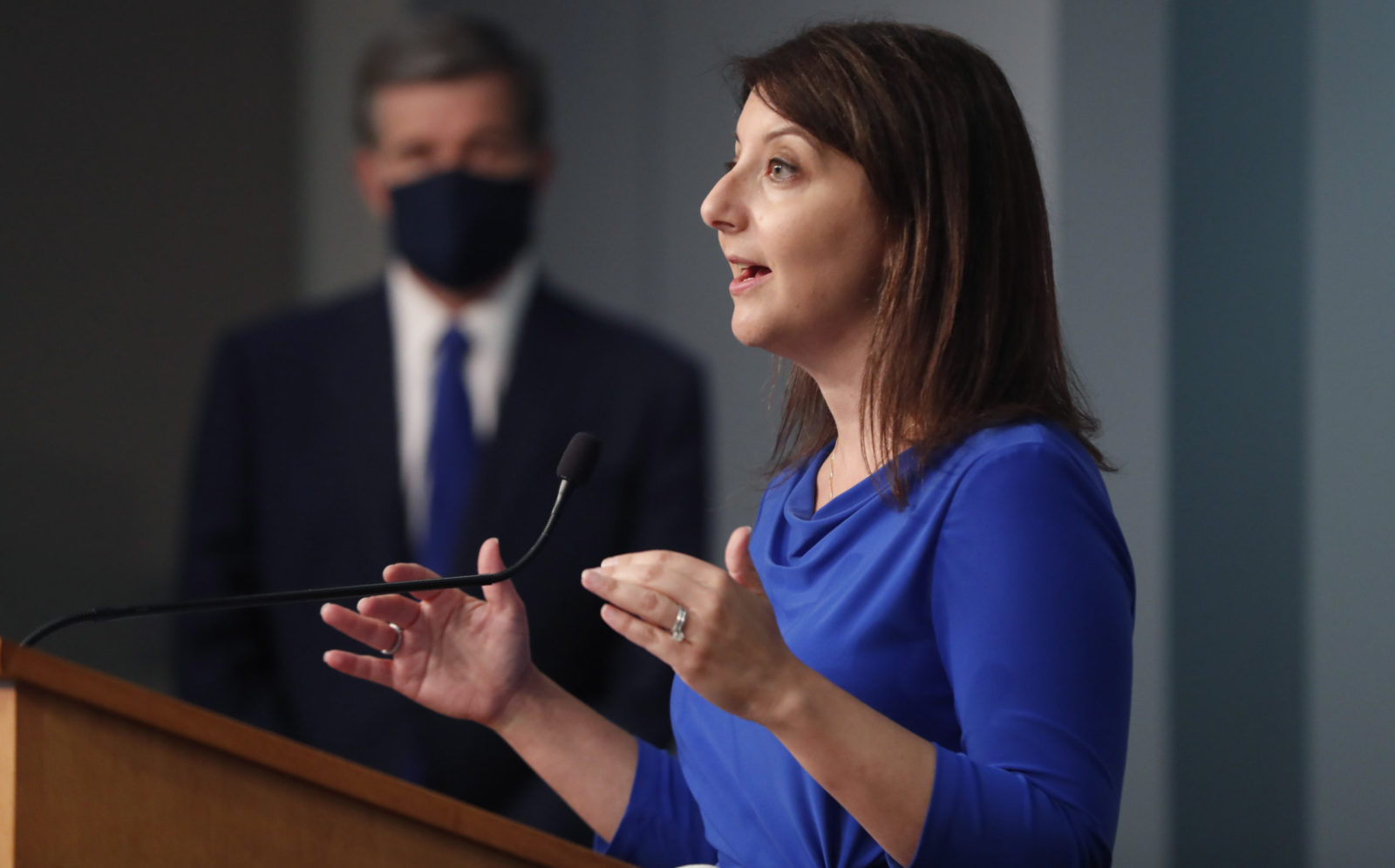 When Mandy Cohen took over as North Carolina’s secretary of health and human services in 2017, she left behind a decade-long career in federal government that had culminated in a high-level position at the Centers for Medicare and Medicaid Services. Since arriving in Raleigh with her husband and two daughters, Cohen has put her experience to use working to expand healthcare coverage and, more recently, devoting most of her energy to keeping a once-in-a-lifetime pandemic at bay.

Roy Cooper, the Democratic governor of North Carolina, feels that the Tar Heel State is in good hands under Cohen, whom he hired after taking office nearly four years ago. “I am grateful for Dr. Cohen’s hard work and conscientious leadership as we continue to fight this pandemic,” he said in an email to Jewish Insider. “She is deeply committed to helping North Carolinians lead healthy lives, and our state is fortunate she agreed to come and work with me.”

But it seems Washington could be calling Cohen back as President-elect Joe Biden works to assemble a cabinet in the lead-up to his January 20 inauguration. In recent weeks, Cohen, 42, has emerged as a contender to lead the Department of Health and Human Services — a position that has taken on an unprecedented level of importance as the coronavirus has spiraled out of control.

A spokesperson for Biden’s transition team told JI that the former vice president “has not made any personnel decisions at this time.”

In a recent interview with JI, Cohen — who knows Biden from her time working in the Obama administration — said it was “flattering” to be considered and indicated that she would be interested in the position if the opportunity should present itself. However, Cohen said she has yet to hear directly from anyone on the transition team about the role. “I think there is very much the recognition that we are in the middle of a crisis,” she said, “and bringing folks in who have past experience is really important.”

“The learning curve has to be incredibly short here because there’s so much to do, and you’ve got to make sure that no balls are dropped,” Cohen said.

Still, she was careful not to overstate the rumors, emphasizing that she was, first and foremost, focused on the more immediate task of curbing the pandemic in her state. “As of right now,” Cohen told JI, “I’m here in North Carolina and doing the work.”

And there is much work to be done. Cohen oversees a department of 17,000 employees and is in charge of the state’s Medicaid program as well as mental health and economic services, among other things. Lately, however, she has marshaled the department’s resources toward addressing the virus as more than 325,000 people in North Carolina have tested positive for COVID-19 and cases and hospitalizations in the state continue to rise.

“This is nothing anyone has ever faced before,” Cohen explained in a phone conversation last month. When the virus first came to North Carolina, she said, the state ran into issues including protective equipment shortages and effective testing. But Cohen now feels that North Carolina has developed a pandemic-ready infrastructure it can rely on heading into the winter months, during which cases are expected to skyrocket.

“We’ve had to build a lot of response capabilities whole-cloth that did not exist before,” she said, such as data tracking, rapid testing and ad campaigns.

When she relocated to North Carolina close to four years ago, Cohen could never have predicted that she would be staring down a pandemic that has claimed more than 250,000 lives in the United States alone. But in many ways, her past work in public health has prepared her for this moment.

Born in Baldwin, New York, on Long Island, Cohen attended the Yale School of Medicine while studying for a public health degree at Harvard University. She trained as a physician at Massachusetts General Hospital but yearned to apply her medical background to public policy. “How do we influence the system in order to drive better outcomes for people and communities?” Cohen recalled wondering.

With that question in mind, her first stop in D.C., in 2008, was at the Department of Veterans Affairs, where she worked to integrate women’s health care into a system that “was designed for men.”

Next, Cohen spent several years at the Centers for Medicare and Medicaid Services, during which time she helped implement the Affordable Care Act and served in her final two years there as chief operations officer and chief of staff.

By the time Cooper came calling, Cohen felt ready for a change. “It was an opportunity,” she said, “to continue the work I had done at the federal level, bring it here to the state and go beyond just the insurance component.”

Before she found a house in Raleigh, Cohen, who is Jewish, made sure that she had chosen a synagogue as well as a preschool for her children. Cohen, a member of the Conservative Beth Meyer Synagogue, said she has always had a strong connection to her faith. Though she is busier than ever, she makes an effort to have Shabbat dinner every Friday so she can establish, at least for her kids, a demarcation line between the work week and the weekend.

While in-person prayer is not an option, she has continued to attend online services throughout the pandemic and has developed a close bond with the local Jewish community, which she said has given her a sense of place as a transplant to North Carolina.

This Yom Kippur, according to Beth Meyer Rabbi Eric Solomon, Cohen spoke to congregants during a virtual event about the interconnection of Jewish values and public service. “It was inspiring,” Solomon said. “She speaks passionately about the fact that she wears a chai necklace. It’s given her strength, her Jewish identity, her sense of being a minority, but proud.”

“My Jewish identity is very much a part of who I am and how I lead here in the state,” Cohen told JI. “I talk about that often, in terms of Jewish values of healing the world and humility and trying to make the world a little bit better than when you entered it. I think about those things a lot as I try to lead us through this crisis.”

Cohen believes her faith complements her dedication to scientific inquiry rather than inhibiting it. “I always joke that I think that Judaism is founded on public health,” she mused. “It’s about kashrut and being kosher and washing your hands. We make that a point in our prayer. Pork and shellfish had a lot to do with disease-borne illnesses. I find that so fascinating. Before we even understood what germs were, we embedded into our cultural practices things that would stop the spread of germs.”

“Jews have always been thinking about public health before they even knew they were,” she said.

During Cohen’s first couple of years in Raleigh, one major goal was to help transform the state’s Medicaid program through partnerships with insurance companies as a part of a transition to a managed care system that is scheduled to launch next summer. “The majority of my time prior to COVID was focused on innovating in that program,” she said. “We got a lot of national attention for it.”

As she has shifted to a nearly pandemic-exclusive focus, Cohen is proud of the public health scaffolding her team has put in place since the virus hit the United States. But she is concerned that the next few months will be tough, even as she is optimistic that an effective vaccine will be available, by her estimation, at the end of December, at least in limited supply.

“We’re on shaky ground, and I’m very worried as we head into the holidays,” she said. “We have a lot of work to do in the next number of months to avoid what could be the worst of this pandemic.”

That goes for the entire country, not just North Carolina, Cohen noted, while adding that she was confident Biden will prioritize curbing the pandemic, inoculating the entire population with a successful vaccine and then working toward a recovery from one of the most catastrophic crises in American history.

“I do think that the priorities that I’ve worked on for more than 10 years in different roles in the government continue,” she said. “How do we make sure that folks have access to high-quality affordable health care? And then, how do we use the levers of government in partnership with the private sector to make that possible?”

The pandemic, Cohen told JI, “only shines a light on the reason we’ve been doing the hard work to get more people access to insurance coverage and get access to high-quality care.”

Under Biden’s leadership, Cohen envisions that there will be a focus on health equity — making sure that public health officials are not only thinking about an effective response to the pandemic but also about “the disproportionate impact on historically marginalized communities,” an approach she said she has taken in North Carolina.

“That needs to happen across the board in health care,” Cohen told JI, “so I expect that to also be a priority for an incoming Biden administration.”

Of course, Cohen made sure to clarify that she wasn’t speaking on behalf of the incoming president and that she had not spoken to anyone on the Biden transition team about her views on public health.

“That is a Mandy Cohen answer,” she said.

In the near future, however, Cohen will find out if her answer will become the nation’s.