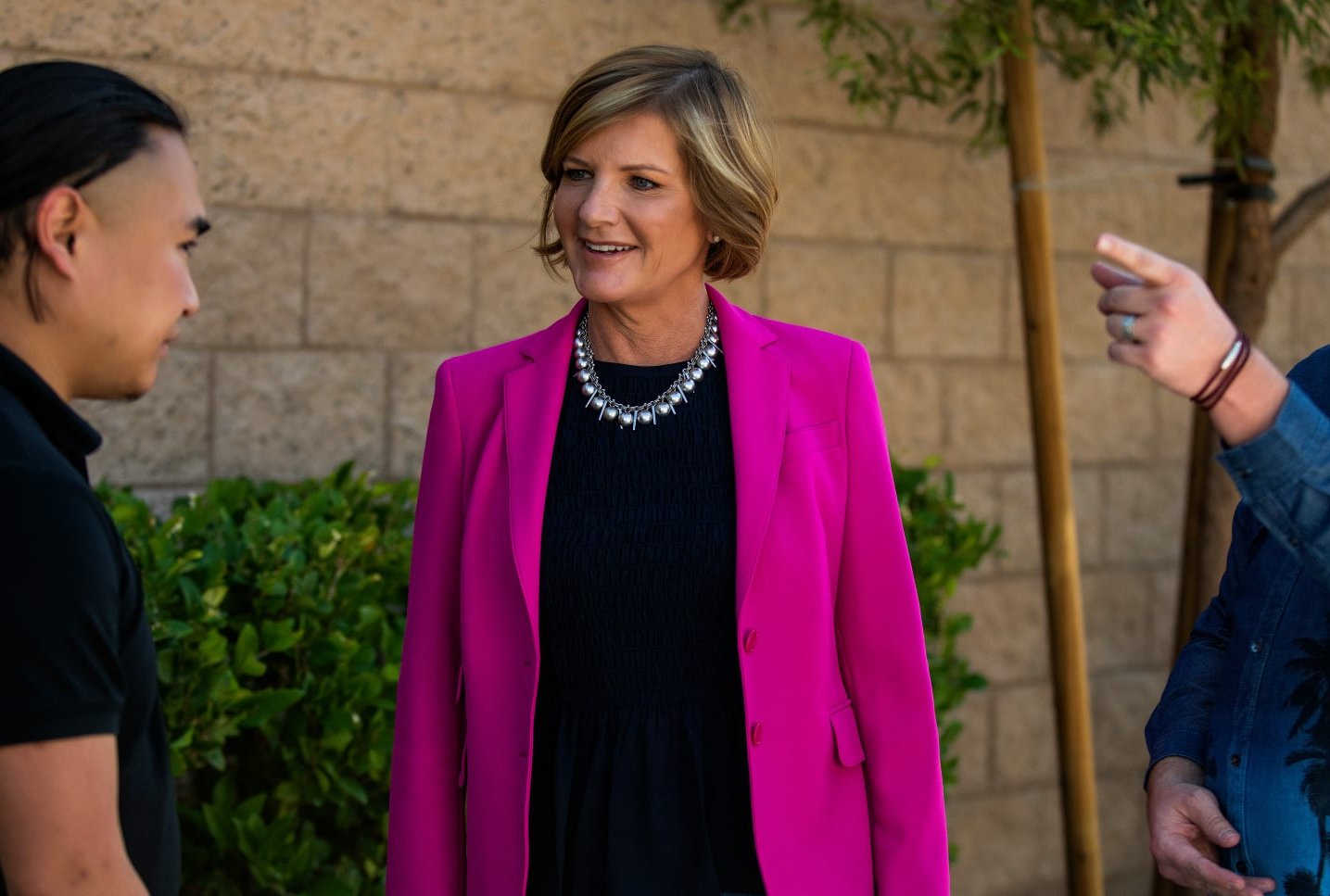 Growing up in Canton, a small city in northeast Ohio, Rep. Susie Lee (D-NV) spent much of her childhood at the local Jewish Community Center, where she swam and worked as a lifeguard. Her mother also taught swimming lessons there, and several of Lee’s seven siblings worked as lifeguards.

To this day, Lee, who is not Jewish, chokes up talking about her childhood.

“My family’s participation with the Jewish Center… certainly was instrumental in setting me on my life’s course,” the congresswoman told Jewish Insider, her voice thick with emotion. “The Jewish Center basically provided my entire family with employment. We were all lifeguards… The aid that my family received was really important.”

“I literally spent my childhood at the Jewish Center,” she continued. “It gave me a job, it gave me responsibility.”

The experience shaped her interactions with the Jewish community and other minority communities throughout her career. Decades later, Lee remains close friends with some of the people she met through the JCC.

“I think any time you’ve received the outreach and the support of any community, obviously, you grow an affection and an understanding,” she said.

More broadly, Lee says her childhood shaped her life’s course, including her career as an executive in education nonprofits. The congresswoman’s first foray into politics was a failed congressional campaign in Nevada’s 4th district in 2016.

In 2018, Lee ran again in the neighboring 3rd district, winning the general election by nine points and claiming the seat that had up until that point been held by now-Sen. Jacky Rosen (D-NV).

Lee said that her cumulative life experience — from her time at the Canton JCC to her experience in education nonprofits, drove her to first run for Congress.

“The dysfunction in Washington actually puts up more barriers sometimes than it takes down,” she explained. “I, like many people in this country, was frustrated by the dysfunction and hyperpartisanship in Washington and felt like my type of leadership was about… working through the tough issues, doesn’t matter if it’s a Democrat or Republican, and getting results.”

“It just really is an extension of my long career of helping people,” she continued.

But Lee is in the midst of a tough fight to keep her seat. This election, she’s facing Dan Rodimer — a 6’7” former World Wrestling Entertainment fighter who goes by the nickname “Big Dan” — an outspoken Trump supporter who also touts endorsements from a range of law enforcement groups.

Rodimer did not respond to questions from JI.

The “fair fight” 3rd district — which includes the southern portion of Nevada, including some suburbs of Las Vegas — was drawn with an approximately equal balance of Republicans and Democrats, resulting in competitive elections every cycle. This year will be no exception, Dan Lee, a political science professor at the University of Nevada, Las Vegas, told JI.

Professor Lee noted that the district has gone for both Republicans and Democrats — Barack Obama won it in 2012 and Donald Trump in 2016. But as the incumbent, with a $200,000 cash-on-hand advantage — and an overall fundraising advantage of nearly $2 million — Lee is currently favored to win, he said.

Trump’s overall unpopularity — he last led in the state in July — may hurt Rodimer, Professor Lee added, and the race will likely hinge on how much support Trump is able to maintain in the suburbs.

During her time in Congress, Lee has generally fallen within the Democratic Party’s mainstream on issues relating to Israel and the American Jewish community. She cosponsored last year’s resolution condemning the Boycott, Divestment and Sanctions movement, as well as a resolution lauding the recent Abraham Accords and other legislation supporting the U.S.-Israel relationship.

Lee traveled to Israel in 2018 and again last year, first on a trip for incoming members of Congress, and later with a group of five other congresswomen including Rep. Mikie Sherrill (D-NJ) and Debbie Wasserman Schultz (D-FL). Both trips were sponsored by the AIPAC-affiliated American Israel Education Foundation.

During both visits, the legislators met with Israeli and Palestinian officials, including Israeli Prime Minister Benjamin Netanyahu and former chief Palestinian negotiator Saeb Erekat, and visited locations including Jerusalem, the Golan Heights, the West Bank, and Israel’s borders with Lebanon and the Gaza Strip.

“You realize just how small the country is and how unfriendly its neighbors are,” Lee said of the trips. “But more importantly, how incredibly important [Israel] is as an ally to the United States and why the support of the United States to Israel is so incredibly important. And it’s not just militarily. I think that we have so many opportunities for innovation and entrepreneurship.”

In order to reach a two-state solution, Lee believes the U.S. must continue to act as a strong supporter of Israel, comparing the U.S.’s role to that of an older brother who protects his younger sibling from bullies.

On the issue of restoring aid to the Palestinian Authority, Lee said that the U.S. would need to have greater accountability for how aid money is being used to ensure that it is not funding terrorism. During her first congressional campaign, Lee opposed the 2015 nuclear deal with Iran, breaking with much of the Democratic Party. Though she did not support the original deal, she told JI that she would have preferred the U.S. remain in the agreement rather than pulling out, and is in favor of re-joining it, given Iran’s steps toward achieving nuclear capabilities since the U.S. withdrew.

“I had some concerns about the timeframe, and also about the verification process,” she said. “That being said, once we entered into it, it was being used as our vehicle to hold Iran accountable.”

Lee’s childhood, she said, gave her an opportunity to learn about the Jewish community and gave her a better understanding of individuals who were different from her.

In order to fight antisemitism and other forms of hatred and intolerance, the congresswoman believes the U.S. must foster — on a broader scale — the same understanding that she developed growing up.

“A lot of hatred in antisemitism, Islamophobia, etc., really evolves from a lack of understanding,” she explained. “And I think that’s an important piece of us continuing to build a more just society, and making sure that we understand each other and approach each other with a level of understanding. And I think that, sadly, that is vastly lacking at this point in time, and I hope we can begin to heal and improve that.”

She added that she sees the right wing as the primary source of antisemitism and does not see it as a significant issue in the Democratic Party.

“I think that there have been many times when antisemitism has been attempted to be used as a divisive issue within our party,” she said, acknowledging that “there are members of our party who I’m just going to say are more pro-Palestine than I am and there are people who have said unfortunate things.”

She went on to condemn the president for failing to clearly disavow white supremacy, and argued that strong leadership is critical to fighting antisemitism and other forms of hatred.

“There just needs to be no gray area,” she said. “Leadership in what we say and how we act has ramifications. And I think it starts at the top. I think we all need to act and speak in a manner that makes it clear that we oppose any type of hate towards any type of group of people.”

With just weeks to go before Election Day when she spoke to JI, Lee was confident that her record during her first term will convince voters to send her back to Congress.