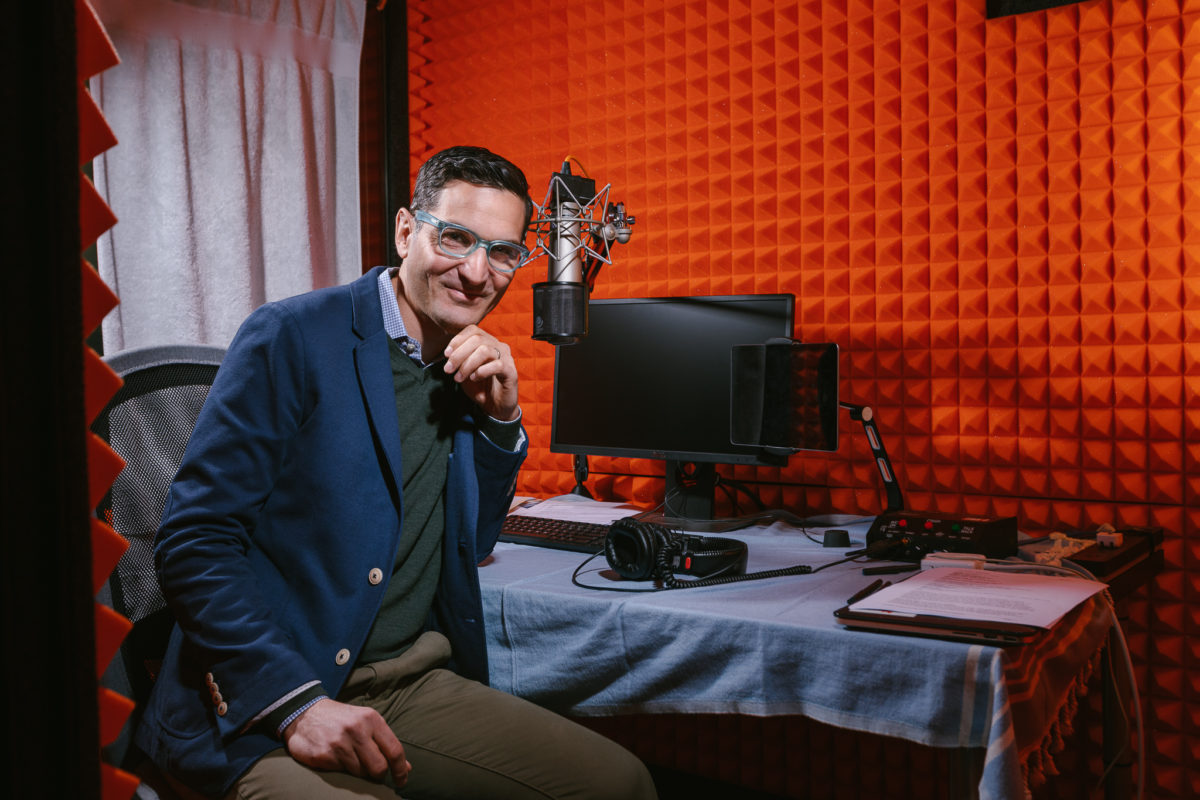 Guy Raz in his studio

Guy Raz has interviewed hundreds of founders and CEOs as the host of “How I Built This,” the immensely popular NPR podcast launched in 2016. But in a new book, he admits that business was a vocation he once regarded with disdain.

“In high school and college, I used to think that ‘business’ was a dirty word,” Raz writes in the introduction to How I Built This: The Unexpected Paths to Success from the World’s Most Inspiring Entrepreneurs. “To me, it was the realm of hucksters and pitchmen selling cheap consumer products on late-night infomercials.”

His views have changed, of course, as Raz has come to view with a sense of wonderment the varying risks taken by some of the most accomplished entrepreneurs.

“They are not natural superheroes; they are all Clark Kents,” he says of the subjects of his book. “The only difference between them and you, at this moment, is that when opportunity presented itself, they went into the phone booth and put on the cape. They took the leap. That’s basically it.”

The book, published by Houghton Mifflin Harcourt, is a collection of stories based on interviews with such innovators as James Dyson, Lisa Price and Jenn Hyman, in which Raz tries to demystify the process by which they arrived at success.

“My goal is to pull back the curtain on entrepreneurship,” he says, “to shed light on the black box of entrepreneurial success and to provide an architecture for how to think creatively about building something, whether that’s an idea, a movement or, of course, a business.”

In addition to “How I Built This,” Raz is the host of “TED Radio Hour” and “Wow In The World,” a podcast for kids. In an email exchange with Jewish Insider, Raz — whose storied career as a foreign correspondent for NPR and CNN includes stints in Berlin, London and Jerusalem — discussed his own path, why the immigrant experience is conducive to entrepreneurship and what makes business leaders tick.

The interview has been lightly edited for clarity.

Jewish Insider: How did you come to podcasting after years as a foreign correspondent?

Guy Raz: I started out as a radio reporter in the late 1990s. I was never that great as a reporter. Always much better as a storyteller. In 2012, I left the news world behind to jump into the then-unknown world of podcasting. I worked with TED to recreate and relaunch a show called the “TED Radio Hour” and that was the sort of “rebirth” of my career as a podcast creator.

JI: Was it hard making the adjustment?

Raz: Not really. The stories I told overseas were stories. And I was always more interested in personal journeys and human dramas rather than day-to-day news.

JI: Do you think that Jews have a propensity to be boot-strapping entrepreneurs?

Raz: Maybe. But I have no data to back this up. I think everyone has the propensity — with good planning and a good idea — to be a boot-strapping entrepreneur.

JI: Is there anything about the immigrant experience that is conducive to entrepreneurship?

Raz: For sure. There is a hunger that immigrants have and an ability to see opportunities in ways that are sometimes invisible to native-born citizens.

JI: Do you have a favorite interview subject?

Raz: I love talking to people who are not “natural-born” entrepreneurs. And the book is designed to be a guide for those who want to learn how to think and act entrepreneurially.

JI: Have you found that there are similarities between business and journalism?

Raz: There are. Planning, preparation, research and hard work.

JI: One of your most revealing interviews was with Haim Saban in 2018. Do you believe that there are characteristics associated with Israeli life and culture that lead to innovation?

Raz: I think there is probably something about the Mediterranean basin that makes people more entrepreneurial. It is the cradle of so many seafaring cultures: Phoenicians, Greeks, Turks, Romans, Cypriots.

JI: What’s next for you? Another book?

Raz: Oh no! Not anytime soon. I need a break! But I will double down on the podcast and maybe — just maybe — there might be a new one coming in the future.