'My speech will focus on an uplifting positive vision for America, and highlight the president's record of results for my district and for the country' 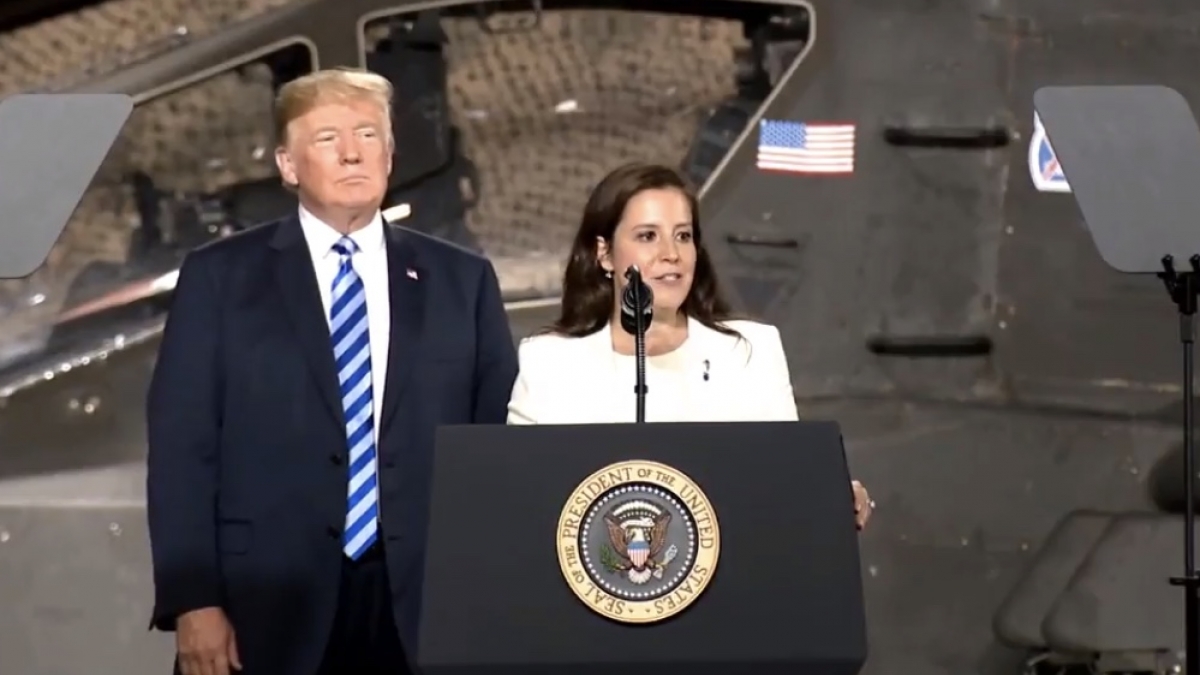 Rep. Elise Stefanik (R-NY), one of three Republican House members selected to speak on Wednesday night at the Republican National Convention, previewed her remarks in an interview with Jewish Insider.  Stefanik says she will offer an “optimistic” look at the accomplishments of President Donald Trump’s first term in her remarks this evening.

“My speech will focus on an uplifting positive vision for America, and highlight the president’s record of results for my district and for the country,” Stefanik, who represents New York’s 21st congressional district, told JI.

Stefanik — whose district includes the Fort Drum army base — is a member of the House Armed Services Committee, and said she will also touch on national security issues. “National security issues, and the president’s record of pay raises for our troops, strong foreign policy, strong alliances is… something that is just a positive for voters across the country to know,” she explained.

She called the first two nights of the RNC “a smashing success” because voters are hearing from “mostly everyday Americans who talk about how the president’s policies and support have made an impact on their lives. I think those stories resonate with independent and all voters, much more so than the Hollywood celebrities that had a doom-and-gloom message [at the Democratic National Convention last week].”

In 2014, Stefanik, 36, became the youngest woman ever elected to Congress. She still is the youngest Republican woman in the House, and is rising in prominence nationally in the GOP. The third-term congresswoman told JI she was honored to be picked to make the case for Trump after becoming one of his fierce defenders during the impeachment process. “[Trump] knows that I’m focused on results for my district, and I work effectively with the president to deliver those results to my district,” she stressed. “I also think my role in recruiting women — we have the highest number of Republican women ever running before — that’s something I’m very proud of, to have been the leader on that initiative.”

The New York lawmaker predicted that Trump will overperform in her state in the fall. “I think Democrats are losing significant support in New York, you’re seeing significant population shifts away from New York City and the president’s numbers continue to grow in upstate New York,” she explained. “I think that the president is going to overperform and do better in New York than he did in 2016, not just to not upstate districts, but all across the state.”

Stefanik told JI that there has “never been a president who is more supportive of the U.S.-Israel relationship than President Trump,” citing the embassy move, the withdrawal from the 2015 nuclear deal with Iran and his fight against global terror. “That is a record that this president is proud of and every American should be proud of,” she said, “because it’s coming after the Obama administration, who one of the first statements they made was saying there needs to be more daylight between the U.S. and Israel.”

The Republican congresswoman said she is concerned by both current members of Congress and  emerging Democratic candidates taking a more critical stance on Israel. Stefanik indirectly referenced Rep. Ilhan Omar (D-MN) who, she said, should not be seated on the House Foreign Affairs Committee. “And the Democratic Party has embraced activists like Linda Sarsour, who is a blatant antisemite,” she added.

Stefanik, who served as recruitment chair for the National Republican Congressional Committee (NRCC) in 2018, said it’s critical “to continue to work in primaries to support pro-Israel candidates in both parties because that important tradition of bipartisanship is absolutely critical.”