How ‘Mishpacha’ guided readers through the coronavirus 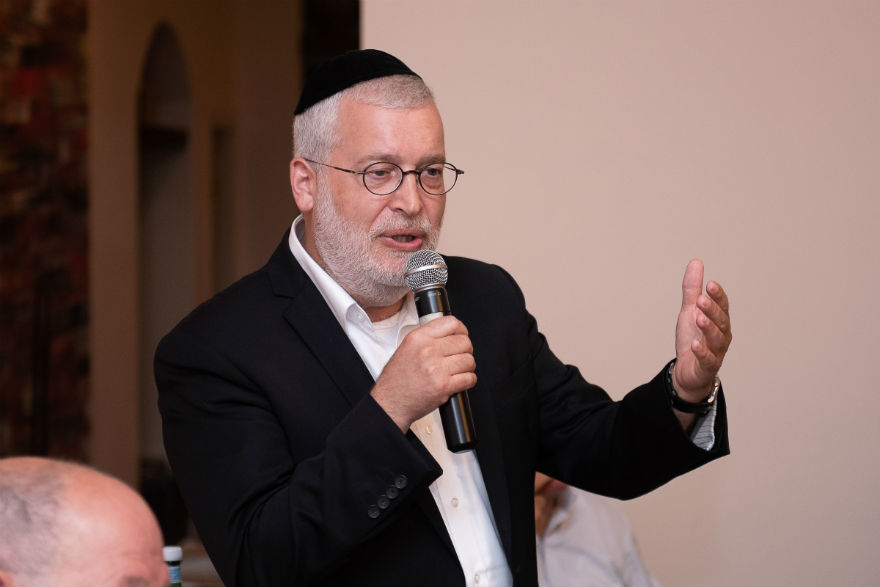 In the days leading up to Passover in Bnei Brak, filmmaker Yariv Mozer was embedded with the IDF soldiers who had been deployed across the city as part of its strict coronavirus lockdown.

The whole experience was a culture shock for Mozer, but there was one thing he really couldn’t understand: why so many people were running from store to store looking for family.

That was, he told Eli Paley, the publisher of Mishpacha magazine, until he realized they were trying to purchase a copy of the popular haredi weekly, whose title is the Hebrew word for “family.”

“He said to me, I went with my camera and I heard people going from store to store asking ‘where is the family, why isn’t there any family, what happened to the family?’” Paley said of his first conversation with Mozer. Paley is also the founder and chairman of the Haredi Institute for Public Affairs, which co-produced Mozer’s film, “With Heaven’s Help,” which aired on Keshet 12 in Israel on Tisha B’Av.

That anecdote didn’t make it into the final cut of the film about Bnei Brak under lockdown, but it perfectly illustrates the centrality of Mishpacha to many haredi families.

And that is not a responsibility that Paley takes lightly. Over the past few months, as the coronavirus has devastated haredi communities in both New York and Israel, Paley has felt an elevated sense of duty in publishing the weekly English and Hebrew versions of the magazine.

“Part of our role as a publication was really to try to be the middleman to express the sense of urgency to our readership,” he told Jewish Insider in a recent Zoom conversation from his home in Jerusalem. “To bridge the gap and to bring the story to our readers who are missing the direct knowledge through the [mainstream] media.”

As the pandemic stretched on, Paley — who wears dual hats as Mishpacha’s publisher and as an activist through the Haredi Institute for Public Affairs — worked tirelessly to both counter the anti-government attitudes among some haredim in Israel and to work with the government to better understand the unique needs of the ultra-Orthodox community during the crisis.

The magazine, he said, does not hold back from reporting on stories that expose and criticize behavior in the haredi world, including a recent cover story about yeshivas in Israel that were instructing students not to get tested for COVID-19, so that the results couldn’t be used to justify closures or lockdowns.

The article garnered a lot of criticism from readers, Paley said, but the magazine doesn’t shy away from such controversy.

“Our role as a publication is much more than just reporting, it’s also creating an awareness and creating a discussion,” he said, “and also having the courage to criticize when we see behavior in our own society that is not responsible or appropriate.” The editors and writers on staff, Paley said, “really identify with the mission of serving the community. It’s not just about doing good journalism or entertainment. People have the sense of doing a public service.”

Paley has helmed the publication since its early days, close to 30 years ago. And 16 years ago, Mishpacha launched a weekly English magazine, which is popular around the world as well as in Anglo communities in Israel.

“After over 30 years of working in the haredi world, I think Mishpacha finds a fine line between being proactive and being courageous enough to address issues in the society, but still to do it in a way that it will be accepted and heard,” he said.

The English version of the magazine often adopts a more moderate tone than the Hebrew edition. As a rule, neither magazine — in line with the majority of haredi publications — prints photos of women. But in 2016, the week before the U.S. presidential election, the English magazine bent its rules, printing an outline of Hillary Clinton’s face on its cover.

The move was met with both criticism and praise. But Paley stands by that decision — as well as the longstanding rule.

“I’m not saying it’s right or wrong, but this is the standard in haredi media today,” Paley told JI. “If I want to be relevant to our core readership, in order to be effective — not in order to sell more magazines — if I want to really be a voice that will be heard and appreciated and taken seriously, I have to choose my battles.”

Last year, Mishpacha launched a revamped website, only in English, that made a conscious choice to include photos of women, despite the policy in print.

In 2016, as it appeared likely that Clinton was poised to become the first female president of the United States, the magazine’s rabbinic oversight board began to discuss how it should approach the issue.

Earlier in the year, Paley said, Mishpacha passed up an opportunity for an exclusive interview with the presidential candidate because she conditioned it on printing her photo with the article. But as the election approached, “we started talking to gedolei haposkim [leading rabbinic arbiters] and rabbonim in America about what we should do,” Paley said.

The rabbis who were consulted, he recounted, told the magazine there was no halachic prohibition on printing photos of women at all. Furthermore, “they said, ‘no question that if Hillary is going to be elected, you have to put her picture in the magazine, including the cover,’” Paley said, citing the issue of shalom malchut, i.e. maintaining positive relations with the ruling government.

The week before the election, Mishpacha “tested the waters” with the shaded outline of both candidates’ faces, Paley said. The rest, as they say, is history, and the magazine did not have any concerns about printing the president’s face moving forward.

Fast forward four years, and Joe Biden has promised he will select a woman as his running mate and future vice president — returning the issue to the forefront. But as far as Paley is concerned, the matter is settled.

“We are a publication that makes decisions according to rabbinical guidance, and that’s exactly what we did,” he said. “So this is the way that we will do it in the future.”