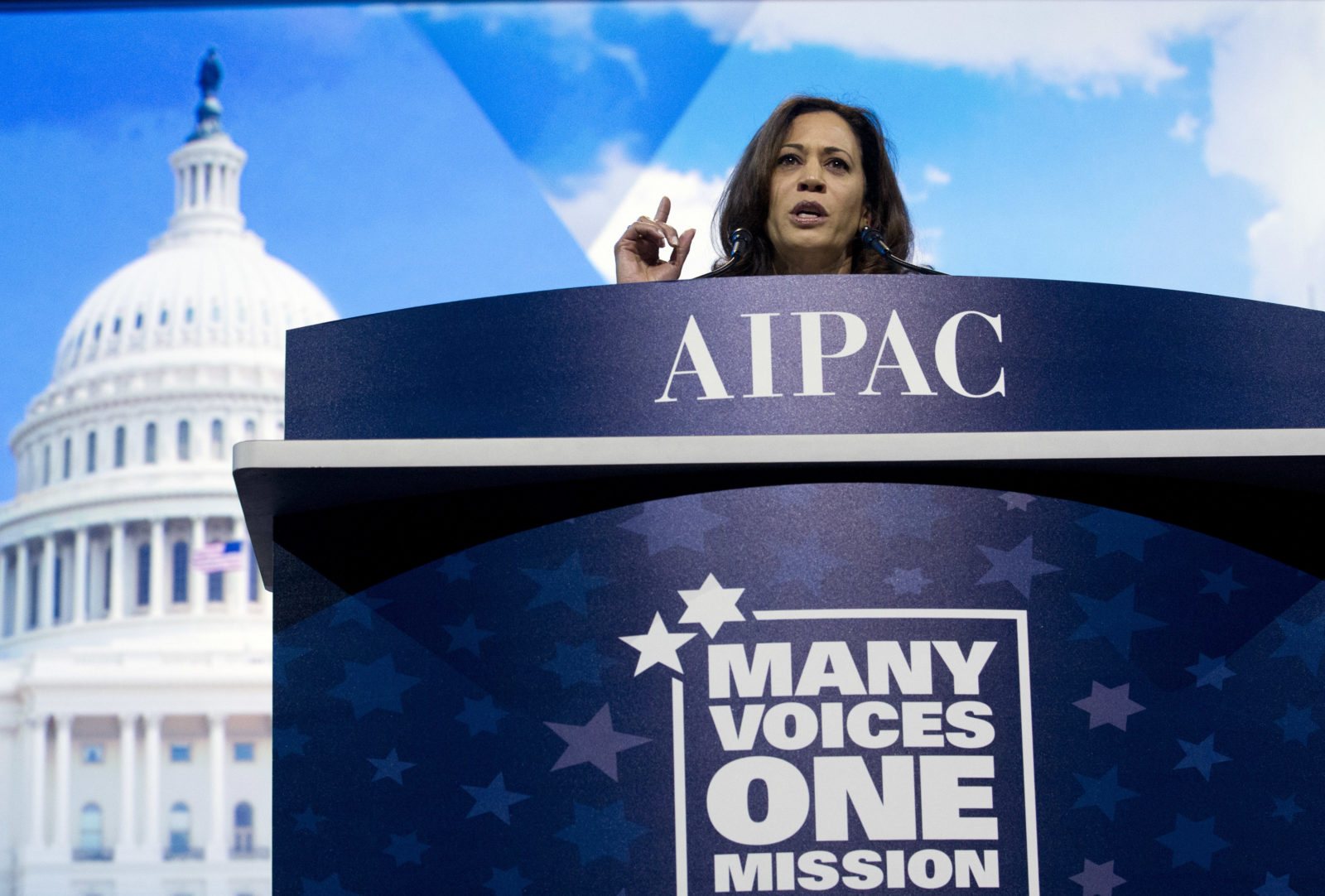 Biden picks Kamala Harris. Here’s what you need to know

After presumptive Democratic presidential nominee Joe Biden selected Sen. Kamala Harris as his running mate, allies and colleagues of the California senator weighed in on what she brings to the ticket.

Harris, a first-term senator from California who previously served as the state’s attorney general and the San Francisco district attorney, launched her own bid for president in January 2019, dropping out of the race in December. Her record as a prosecutor has made her controversial among some in her party’s progressive wing.

Harris has been active on Israel-related issues since joining the Senate. The first bill she co-sponsored in the Senate condemned United Nations Security Council Resolution 2334, which criticized Israeli settlements.

“Her support for Israel is central to who she is,” a Harris campaign spokeswoman told McClatchy in 2019.

Since then, she has sponsored resolutions condemning the 2018 Tree of Life shooting and the April 2019 Chabad of Poway shooting. Harris voted against a bipartisan 2019 anti-BDS bill, expressing concern that it could violate Americans’ First Amendment rights.

One of Harris’s closest friends in the Jewish community is San Francisco’s Dr. Anita Friedman. “Over many years, Senator Harris has been a steadfast supporter of the U.S.-Israel relationship,” Friedman told Jewish Insider. “Through traveling to Israel with her several times and closely working with her, I can personally attest to her deep personal commitment to our democratic ally.”

Other key Harris backers include Roselyne “Cissie” Swig, whose close ties with Harris were detailed in Politico last year, and Amy Friedkin.

When Harris spoke at AIPAC’s Policy Conference in 2017, she began by mentioning “my dear friends and AIPAC board members, Anita Friedman and Cissie Swig and Amy Friedkin.”

Jewish Democratic Council of America executive director Halie Soifer, who previously served as a national security advisor to Harris at the beginning of her term in the Senate, told JI that she’s excited to see Harris on the ticket because of her leadership skills and her values. Soifer pointed to the Senate resolution condemning hate and antisemitism she sponsored with Sen. Marco Rubio (R-FL) in 2017 as proof that Harris is “willing and able to work with the other side of the aisle, to work with Republicans to to get things done.”

“She’s no nonsense,” Soifer continued in singing her former boss’s praises. “She’s very values-driven, and she’s just a person with deep convictions — and one of them is support of the U.S.-Israel relationship and supporting the Jewish community. So I have no doubt that the Jewish community is celebrating alongside me tonight.”

In June, Harris sent a letter to President Donald Trump expressing opposition to Israel’s potential unilateral annexation of portions of the West Bank. “While the prospects for a two-state solution in the near-term appear dim, I believe that peace between Israelis and Palestinians is possible only through direct negotiations and an agreement that results in two states for two peoples,” she said in the letter. “Unilateral moves by either party, such as annexation, put a negotiated peace further out of reach.”

In a 2019 candidate interview with The New York Times, Harris said that she believes that “overall” Israel does meet international human rights standards. She also opposes the Boycott, Divestment and Sanctions movement and wants the U.S. to rejoin the JCPOA nuclear agreement with Iran.

Harris has made numerous trips to Israel. During her first visit, in 2004 with the Jewish Community Relations Council of San Francisco, she met with a wide range of individuals, from settlers to Israeli-Arab students. Rabbi Doug Kahn, then the JCRC’s executive director, told JI he remembered Harris being “a great questioner, eager to learn all she could during our trip.” Kahn said Harris appreciated “the complexities of the issues, [was] fascinated and moved by the people we met, and clearly supportive of Israel.”

Harris has a very personal connection to the Jewish community — her husband, Douglas Emhoff, whom she married in 2014, is Jewish. Harris recounted meeting her Jewish in-laws for the first time during a conversation at the 92nd Street Y in Manhattan in January 2019. “The first time I meet my mother-in-law, she looks at me, she puts my face in her hand… she looks at me and she says, ‘Oh look at you. You’re prettier than you are on television. Mike, look at her!’” Harris recalled.

Emhoff accompanied Harris on her visit to Israel and the West Bank in 2017 — which included Shabbat dinner with solar energy executive Yosef Abramowitz and his wife, Rabbi Susan Silverman. During the trip, the Trump administration threatened to close the Palestine Liberation Organization office in Washington, D.C. if the Palestinians did not halt their campaign against Israel at the International Criminal Court. In response, the Palestinian Authority announced that it would halt all contacts with U.S. officials, and Palestinian President Mahmoud Abbas cancelled a planned meeting with the congressional delegation that included Harris.

Former Rep. Steve Israel (D-NY) told Jewish Insider that he supported Biden from the very beginning “because of his unwavering support for Israel,” and the selection of Harris as his running mate gives him “a partner who reflects his commitment, his values and his experience” on Israel.

The former Democratic congressman noted that while he was in Congress he “had the opportunity of working with” Harris on Iron Dome funding, and pointed to her strong stance against BDS and her past record prosecuting antisemitic hate crimes.

California Assemblymember Jesse Gabriel, vice chair of the California Legislative Jewish Caucus — who has worked with Harris through the legislature and hosted an event for her with Jewish community leaders — praised Biden’s choice.

“She’s smart and tough, but also has great personal warmth and likability, which helps to explain why she had such broad support from elected officials across California,” he said in an email to Jewish Insider. “I think she’s an excellent choice and expect that she’ll bring a lot to the ticket and to a future Biden-Harris administration.”

He added that Harris has strong relationships with Jewish leaders.

“I expect that she’ll be someone we can count on to listen to our concerns and be an advocate for us in the administration,” he said. “She sent me a Shana Tova text on Rosh Hashanah last year, which I thought was really thoughtful of her.”

Los Angeles Mayor Eric Garcetti, who was one of four members to sit on Biden’s vice presidential search committee, praised Harris. “Kamala Harris will help Joe Biden unite the American people, restore our nation’s soul, and rebuild our country so it’s even stronger than it was before,” he said in a statement.

Former U.S Ambassador to Israel Daniel Shapiro pointed out that the pick coincides with the third anniversary of the violent “Unite the Right” rally in Charlottesville, Va. “Three years after racists marched in Charlottesville, Joe Biden took a huge step toward restoring the soul of our nation in picking a stellar running mate Kamala Harris, who will be our nation’s first Black and first female Vice President,” Shapiro tweeted.

Mike Signer, who served as mayor of Charlottesville in 2017, told JI that “the last few months, and Trump’s egregious, insensitive and incendiary response to proven racial inequity, has shown a lot of people how important it is to have African Americans elevated at every level of leadership, and especially the role of Black women in the success of the Democratic Party. So it makes a lot of sense that he would choose to elevate Senator Harris, with her life story and her proven credentials, to speak to this type of listening to people’s needs.”

Steve Israel told JI that it “doesn’t surprise” him that Biden would choose this day to announce his choice for vice president — “because it’s a stark contrast to Donald Trump,” who was criticized at the time for saying there were “fine people on both sides” of the neo-Nazi march. “In the case of Kamala Harris. she has prosecuted and in the case of Donald Trump, he has equivocated on it.”