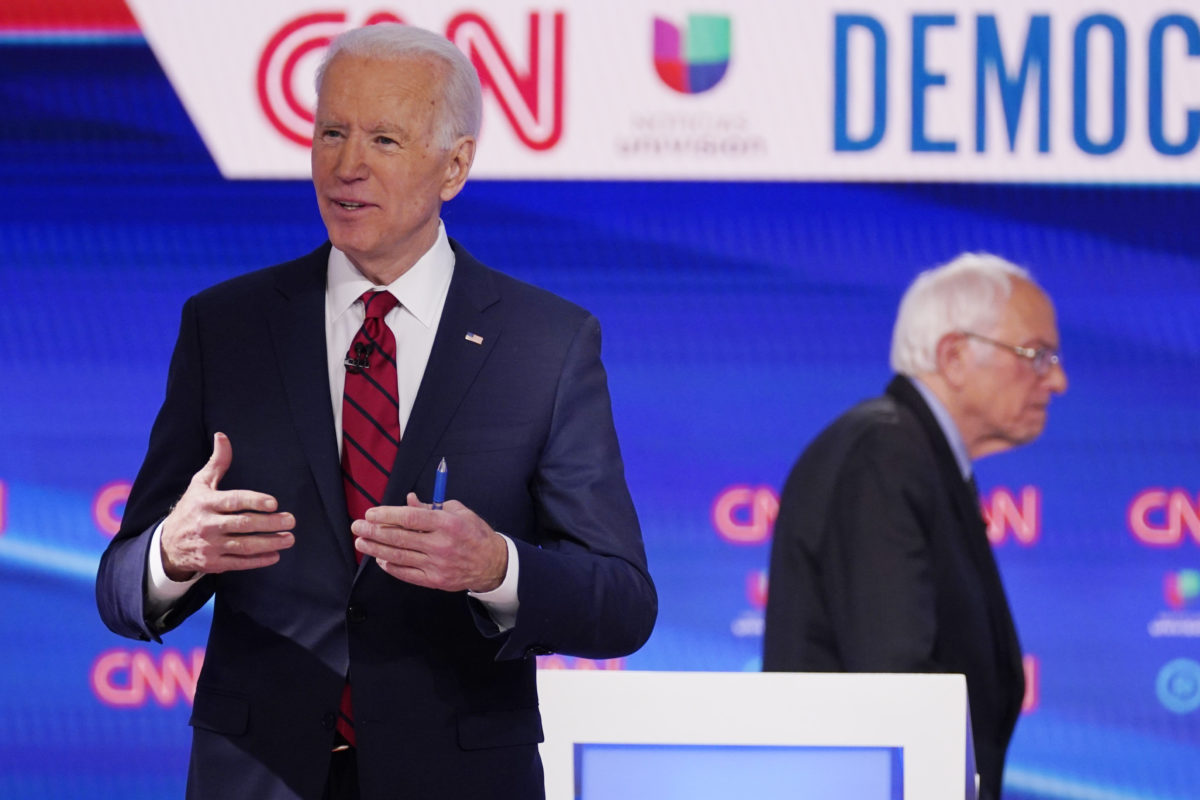 The Democratic National Committee’s platform committee voted overwhelmingly on Monday against adding language that would harden the party’s stance on Israel. The committee rejected the addition of the term “occupation” and also struck down an attempt to condition aid if Israel moves forward with annexation efforts.

The amendment was proposed on Monday afternoon by Clem Balanoff, a Bernie Sanders delegate and the executive director of the Illinois chapter of Our Revolution, a pro-Sanders organization. After a brief discussion during the committee’s virtual meeting, 117 members voted to oppose the amendment, while 34 supported the measure. The vote had five abstentions.

The platform’s Israel plank includes language that expresses support for the U.S.-Israel alliance, a commitment to security funding for Israel and support for the two-state solution “that ensures Israel’s future as a Jewish and democratic state with recognized borders and upholds the right of Palestinians to live in freedom and security in a viable state of their own.” The platform also notes opposition to “unilateral steps by either side — including annexation — that undermine prospects for two states” and opposition to “settlement expansion.”

The amendment introduced during Monday’s meeting proposed including the words “without occupation” to the language, removing the word “expansion” in the settlement clause and adding a line that would condition U.S. aid against being “used to facilitate annexation or violation of Palestinian rights.”

Sen. Bernie Sanders (I-VT) supported the amendment, according to Arab American Institute President James Zogby, who was a Sanders appointee to the 2016 platform committee.

Former U.S. Ambassador to Israel Dan Shapiro, a member of the platform committee, pushed back against the proposal, saying Democrats “ought to speak with one voice about our support for our ally Israel, and our support of the right of Palestinians to live in a state of their own.”

Shapiro maintained that the Democratic Party took “significant and overdue strides while sustaining the unity of our party” in the 2020 platform. “The platform makes clear our opposition to unilateral steps by either side to undermine prospects for peace,” he explained. “For the first time, we say clearly and by name our opposition to Israeli settlement expansion. For the first time, we state clearly and by name our opposition to Israel’s annexation of territory of the West Bank. We state clearly that we will continue to stand against incitement and terror, and for the first time, we recognize the right of Palestinians to live in a state of their own. And it also makes clear that we will always defend American citizens’ constitutional right to free speech on these issues, even as we oppose efforts to delegitimize or single out Israel.”

During a recent Zoom call with the anti-war organization Code Pink, Zogby called the language on BDS a victory for pro-Palestinian groups. “That’s the same as if in the Republican party’s platform they had a plank that said, ‘We are steadfastly opposed to abortion, but every woman has the right to choose.’ Basically, the second clause nullifies the first clause,” he explained. “They’ve exactly taken the position of the ACLU [that] says it personally doesn’t support BDS but it’s every American’s constitutional right to do it. And I frankly can live with that.”

Wendy Sherman, former undersecretary of state for political affairs and another member of the committee, stressed that U.S. military assistance to Israel “is a mutually beneficial investment, one that protects Israel against very real threats and helps promote security and stability in a region where we know all too well the cost of insecurity and instability.” Sherman also noted that the presumptive Democratic presidential nominee, Joe Biden, “has been extremely clear that he opposes annexation and will continue to oppose it as president.”

Sherman added that the proposed amendment “will divide our party at the very time we need to be uniting in order to defeat Donald Trump.”

A J Street spokesperson told JI that the language in the Israel plank of the 2020 platform “reflects the major progress that has been made on these issues since 2016,” including “explicit opposition to Israeli settlement expansion and unilateral annexation.”

J Street advocated for the inclusion of the word ‘occupation’ before the platform was considered by the full committee. But following the vote, the group said, “We continue to believe the Democratic party should acknowledge and oppose ongoing occupation, a systemic injustice at the heart of the Israeli-Palestinian conflict.”

Arab American Institute President James Zogby, who was a Sanders appointee to the 2016 platform committee, called it “embarrassing” that the DNC refused to include the word ‘occupation’ in the platform. “This is language that every Democratic administration has used,” Zogby told JI. “We are to the right of Benjamin Netanyahu right now on that particular aspect. This is not an expression of unity. This is an expression of drawing an arbitrary red line and not wanting to go across it. It’s a test of wills more than it is a statement of principles.”

Democratic strategist Joel Rubin, who served as director for Jewish outreach for the Bernie Sanders 2020 presidential campaign, was encouraged by the language. “This is the most progressive Democratic platform on the Israeli-Palestine issue,” Rubin told JI. “There are a lot of wins here for what we progressives have been asking for. It’s very inclusive, and it’s a real credit to Joe Biden and his leadership to have a platform that reflects that.”