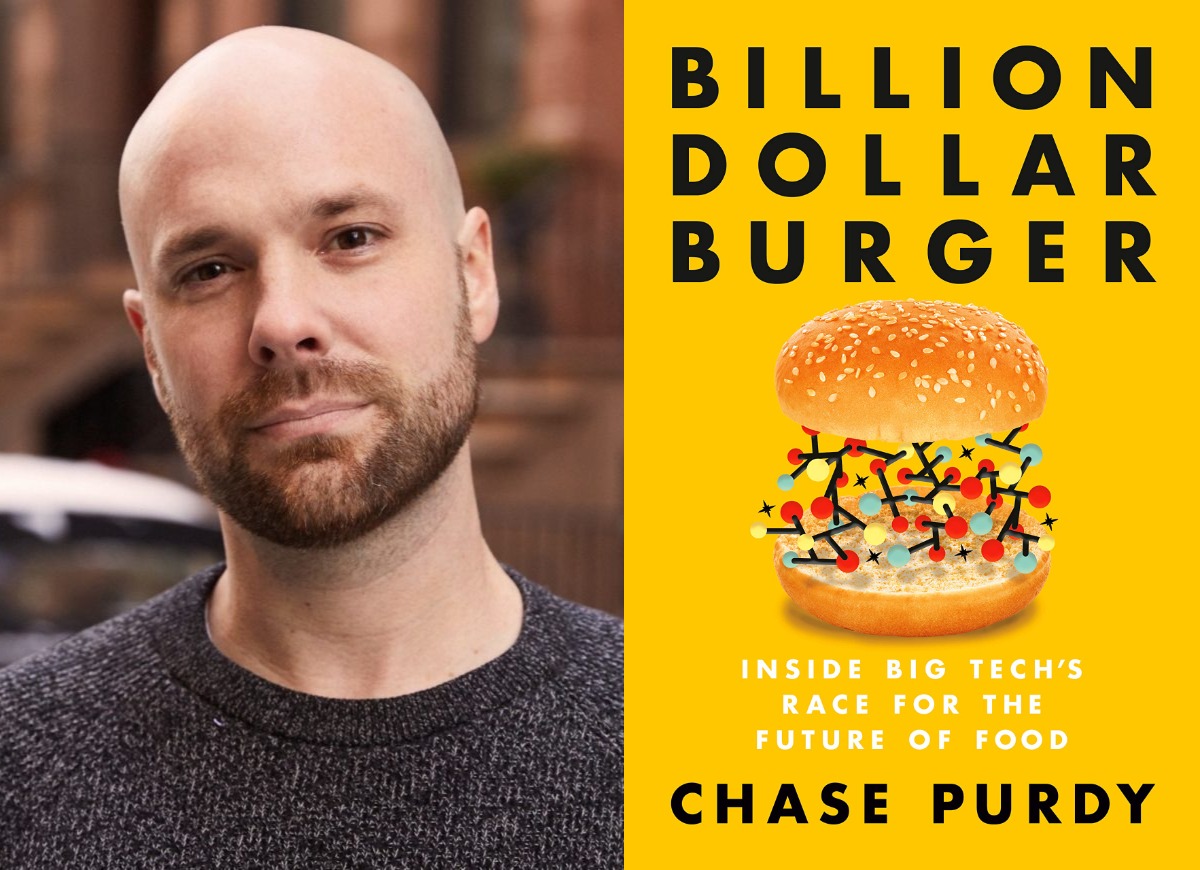 Picture this: You walk into a kosher burger joint, grab a seat and place your order. Fifteen minutes later, your meal, a hot-off-the-grill cheeseburger, arrives at the table.

Does that sound like something out of a Jewish science fiction movie? Perhaps, but not to Chase Purdy, whose new book, Billion Dollar Burger: Inside Big Tech’s Race for the Future of Food, was released last week. In his debut book, Purdy explores the cell-cultured meat industry, considered to be the next frontier in the future of food.

The concept of cell-cultured meat is simple. Cells — usually muscle — are harvested from an animal and then multiplied in a lab, creating tissue. The end result is meat that is — in taste, texture and preparation — remarkably similar to what can be found in grocery stores around the world, but without the carbon emissions found in traditional animal products.

Purdy, a journalist who had previously covered criminal justice issues, first started writing about food and agriculture in 2014 when he joined Politico as a staff writer. Billion Dollar Burger is the end result of two years of research into the world of cell-cultured meat.

Purdy traveled the globe to research his book, visiting labs and meeting with researchers, religious authorities, chefs and other experts. He made several trips to Israel, which — along with Singapore and the United States — is at the forefront of the industry.

It didn’t surprise Purdy that Israel is one of the countries leading the research into cell-cultured meat. “Israel is one of those countries in the world that has had to be extremely conscientious of its own sort of national security, and food security is part of that,” Purdy said, pointing to the advances Israel has made in water technology. “Think about the desalination plants that are turning seawater into potable water. The world is taking its cues from Israel when it comes to desalination of water, and so I think that it’s not a huge leap to think that the world will take a lot of its cues from Israel when it comes to sustainably producing cell-cultured meat.”

And he thinks cell-cultured meat will soon be having its moment globally. Of course, it first has to clear regulatory hurdles, but Purdy is confident that approval will come — potentially within the year. “Do I think that 2020 could be the year? Totally,” he said. “It really depends on the regulatory agencies, the people who are in charge of overseeing and making sure that food safety… You really need the USDA and the FDA, or their counterparts in another country like Singapore and Israel, to give the official stamp of approval. That’s going to be what really decides this.”

Purdy explained that there are dozens of companies producing cell-cultured meat around the world, and roughly one-third of them are “pretty much ready to be serving small amounts of very, sort of basic new products.” The first places to carry the meat, he predicts, will be restaurants in urban areas like San Francisco and New York. It will take a few more years before grocery stores will start to stock cell-cultured products, he predicted.

The author called the shift to cell-cultured meat an “optimistic and promising tool” to tackle climate change, citing the significant greenhouse gas emissions that come from animal agriculture.

Economic development in large countries like India and China has created larger middle classes and accelerated the demand for meat. That increasing demand, he said, will lead to consumers turning to cheaper, easily available meat products.

“Humans throughout history, whenever they have more money to spend, have traditionally turned to incorporate more meat and dairy into their diet,” he said. “And the truth of the matter is, is that if you look at consumption of meat globally right now, every single analyst will tell you that the demand for meat is only going to go up.”

While the demand is going up, there are some that have taken longer to come on board.

“I remember sitting down with one imam, he was watching one of the videos that described how cell-cultured meat is made,” Purdy said. “And he was just sort of blown away and was like, ‘You’ll need to come back later and talk to me and we can think about this some more.’”

The verdict is still out on whether the meat could be considered halal. But could it be kosher?

Purdy told JI that cell-cultured meat would be considered pareve and could be eaten with either dairy or meat.

Purdy consulted the experts — in this case, Rabbi Menachem Genack, the head of the Orthodox Union’s kosher division. Genack, Purdy writes, was enthusiastic about the possibility of kosher cell-cultured meat, though “he stops short of saying cell-cultured pork could be kosher. He lauds it as an innovation that is especially promising for the environment during a time when climate change has understandably become a source of anxiety.”

He compares Genack’s excitement to “the excitement of the people making cell-cultured meat, for whom religious dietary restrictions could be lucrative,” noting the $24 billion kosher food industry and the $1.6 trillion halal market.

On a trip to Silicon Valley, Purdy ran into an Israeli researcher. “He told me in a conversation that he had been talking with a rabbi, and that the rabbi told him that there’s this sort of line of thought that has sort of existed for hundreds of years, that someday that pig would be OK, that pork would be OK to eat and that would be a major signal for something amazing for the world.”

Purdy opens one chapter, which explores the kashrut of cell-curated meat, with a story about Rabbi Chaim ibn Attar, who traveled from Morocco to Jerusalem in the 18th century, stopping for years in Italy, where he received community funds that enabled him to print his religious commentary. Included in his published writings was the idea that in the future, the physiology of a pig would be altered enough to make it permissible to be eaten by Jews.

When Purdy first heard about the concept, he was intrigued. “I was like, ‘You need to tell me everything you know about this, because what you’re saying is [a] very fun sort of idea to play with that, like, cell-cultured meat could be this signal that the world is going to change.”

And Purdy does believe that cell-cultured meat will change the world. But that wasn’t his end game.

His goal in writing the book, he said, wasn’t to become a cheerleader for the industry, but “to give people some more language so they could actually talk about this and think about it… if our charge in life is to repair the world, I think that you have to be thoughtful about this.”