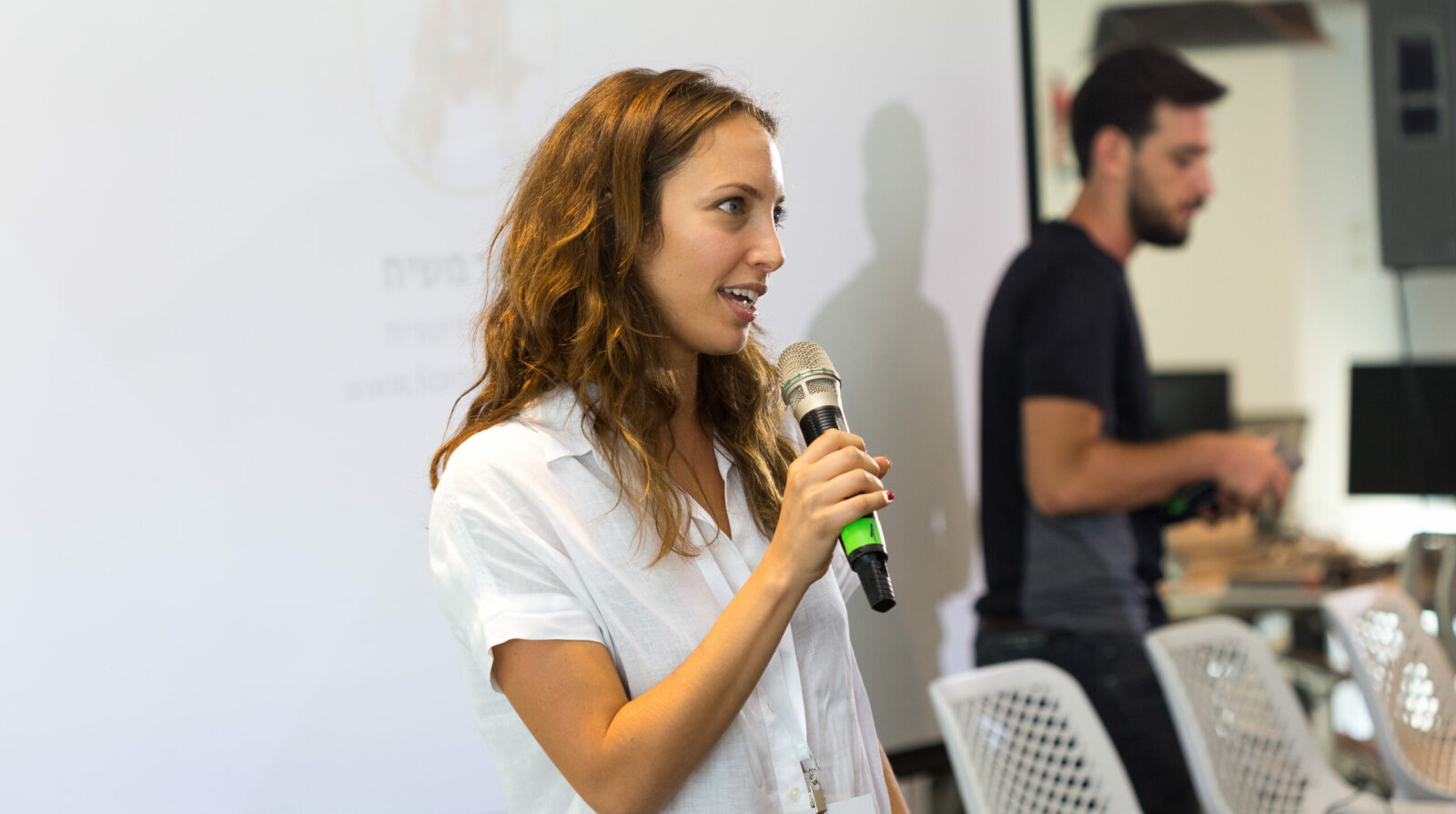 The social entrepreneur helping Israelis balance their budgets via WhatsApp

When Riseup formally launched last October, its founders had no idea how timely it would end up being.

But six months later, the startup aimed at helping Israelis manage their finances and work their way out of debt could not be more relevant — or necessary. The burgeoning company is now guiding customers to adapt to a new and difficult financial reality.

“Most people are still sort of bracing for what is to come,” Tamara Harel-Cohen, the co-founder and chief growth officer of Riseup, told Jewish Insider in a recent interview from Tel Aviv. “Our role is to help them understand what their reality is, what the new reality is, and when the money will run out. And then what their options are.”

Riseup works to help the average Israeli better understand their cash flow, simplify their finances and guide them toward making better financial decisions — all via WhatsApp. And amid the coronavirus pandemic, with a strict nationwide lockdown in Israel only just beginning to lift, many Israelis are facing an unexpected financial crisis. The unemployment rate in Israel surpassed 25% earlier this month, the highest rate in the country in recorded history.

To that end, Riseup — which generally charges 45 shekels ($13) per month — announced in early April that it was waiving its fee, and would be free to all users through at least the end of June.

“None of us know how long this is going to go on for,” Harel-Cohen said. “But we can help people see how much money they have, how long the runway is going to last — so they can at least know where they stand and feel like they’re in control.”

Riseup’s decision to eliminate its subscription fee shouldn’t come as a surprise to those familiar with the startup. From the beginning, its founders came together with a simple goal: to make a positive impact on Israeli society.

That includes Harel-Cohen, who packed up her bags and arrived in Israel four years ago with the objective of making a difference. A London native, she moved to the U.S. to attend Harvard and remained in America for several years afterward, working in digital media. But she soon found herself looking around and wanting more. And when she decided to shift to the world of social impact, the one place she wanted to be was Israel.

“I felt that this was the place where — if I was going to make a difference — it would be in Israel,” she said. And once she arrived, “it’s a bit cheesy to say I felt a sense of belonging, but that was what I felt.”

While Harel-Cohen may not have been born in Israel, she has serious Zionist credentials: Her grandfather, Yossi Harel, was the commander of the Exodus ship that brought Jewish refugees to Israel in 1947. Her parents — film producer Sharon Harel and Egyptian-born investor and philanthropist Sir Ronald Cohen — today split their time between London and Tel Aviv.

And while she never imagined she’d one day call Israel home, the pull was irresistible. Four years ago, she recalled, “I came for 10 days and ended up staying for a couple months.” Eventually, she said, “I just went to pack up my stuff and move to Israel.”

While Harel-Cohen knew she wanted to tackle social challenges, she wasn’t sure where to begin. But she soon met up with hi-tech veteran and “genius” Iftach Bar and Yuval Samet, who had sold his startup to a Swedish company and also recently moved back to Israel to focus on values-driven business. The trio partnered with entrepreneur and former Jerusalem city councilman Hanan Rubin in creating the new startup.

“We got together and we started looking for a problem that we could solve,” Harel-Cohen said. “When I moved here, I was super shocked — it’s the ‘Startup Nation,’ but the Internet here doesn’t work,” she added. “So many things are backwards.” The “Tel Aviv bubble” of the hi-tech world, she said, doesn’t seem to have improved life for the average Israeli.

“Very quickly, we understood that the issue of consumer debt is something that is very big here,” she said. The Taub Center for Social Policy Studies in Israel reported last year that household debt in Israel has been steadily increasing for more than a decade.

The service is a “hybrid model of human and machine,” which is set up to automatically connect to customers’ credit cards and bank accounts and streamline information, sending updates to users via WhatsApp three times a week — and flagging unusual or suspicious transactions.

“We built a very simple model on the basis of cash flow,” Harel-Cohen explained. “The nice thing about cash flow is it gives you one number: How much money do I have left to spend until the end of the month?”

To keep things extra simple, users don’t even need to download an app or manually enter information. Within the WhatsApp chat with Riseup, customers both receive automated updates and can also reach out to the company’s team of human advisors with questions and requests for advice.

“We’re helping people make decisions that will allow them to build financial resiliency and financial well-being — as opposed to creating this… spiral of bad decisions,” Harel-Cohen said. After extensive research, the Riseup team built a product designed to encourage stressed-out consumers to stick with the platform.

“As stress levels go up, then the level of financial decisions that we make goes down,” she explained. “When you’re in scarcity, your IQ goes down, your tunnel vision goes up, your stress levels go up.” That situation, Harel-Cohen said, leads to those in-debt entering “fight or flight mode,” which is “not the mode that you want to be in when you’re making a financial decision.”

The combination of bot and human interaction is essential to the Riseup model. The team of cash flow experts who answer questions for Riseup, she said, advise customers on issues from everything to making big purchases, taking out loans, leasing a car, or even buying new dishes for Passover.

“You can’t call your bank and ask about that,” Harel-Cohen said. “To have someone who can understand and check things… is super, super important. Because a lot of these moments are quite emotional, and technology can often miss that.”

Today Riseup serves approximately 3,500 customers, and is working on rapidly expanding. But unlike most Israeli startups, it was important to the company’s three founders to focus solely on the local market. It was something Harel-Cohen, Samet and Bar agreed upon before they had any other details in place.

“It was always important to all of us… to create an impact in Israel,” Harel-Cohen said, and “to work to make it work here” instead of aiming at the international market.

The three co-founders assembled a team of like-minded investors, including Michael Eisenberg, a partner in the venture capital fund Aleph who has led investments in Wix, Lemonade and WeWork.

“Strong technology-enabled products with great user experience and aligned business models can and will be real drivers for change and impact,” Eisenberg told JI. “Riseup is the poster child of this model in the field of financial resilience for families.” He noted that in its short period of existence, the business is already “successfully improving the financial lives of thousands of Israelis.” Now, he said, it is expanding “even more quickly because of the urgent need for financial resilience brought on by COVID-19.”

The Riseup team was itself significantly impacted by the coronavirus. Harel-Cohen and eight of her coworkers — more than 30% of the company’s staff — contracted the disease last month.

“But now everyone is feeling good and working hard,” she said. “The whole team is working around the clock to help people answer their [financial] questions.”

The increased financial uncertainty and hardship have made a tool like Riseup more relevant than ever to Israeli families.

“People are tightening their belts, they’re spending less, they don’t know what’s going to happen next month or the month after,” Harel-Cohen said. But despite many families’ diminished income, she said customers are still asking how they can put aside money and save for the months ahead. The Riseup team will work with them to “decide on a number” of savings for each month and adjust their cash flow figure accordingly.

“There are so many forces that we’re not in control of, but we are in control — to some extent — on how much we’re spending,” she said.

Before the coronavirus pandemic hit, teams from Riseup were traveling around the country and giving lectures on financial literacy and money management.

“One of the nice things of being in the market that you serve, is that you can go out and talk to people,” Harel-Cohen said. “We really believe in this field model.” The company has recently started to run some Zoom events in order to continue reaching new customers.

And while Riseup’s founders are wholly focused on the Israeli market right now, they’re not ruling out an eventual expansion abroad.

“Once we feel that we’ve really built that base we’re looking to build in Israel — and created the impact that we want to — then we can start that discussion,” Harel-Cohen said. “We certainly think that we have something excellent that we can offer and differentiate from those in other markets.”