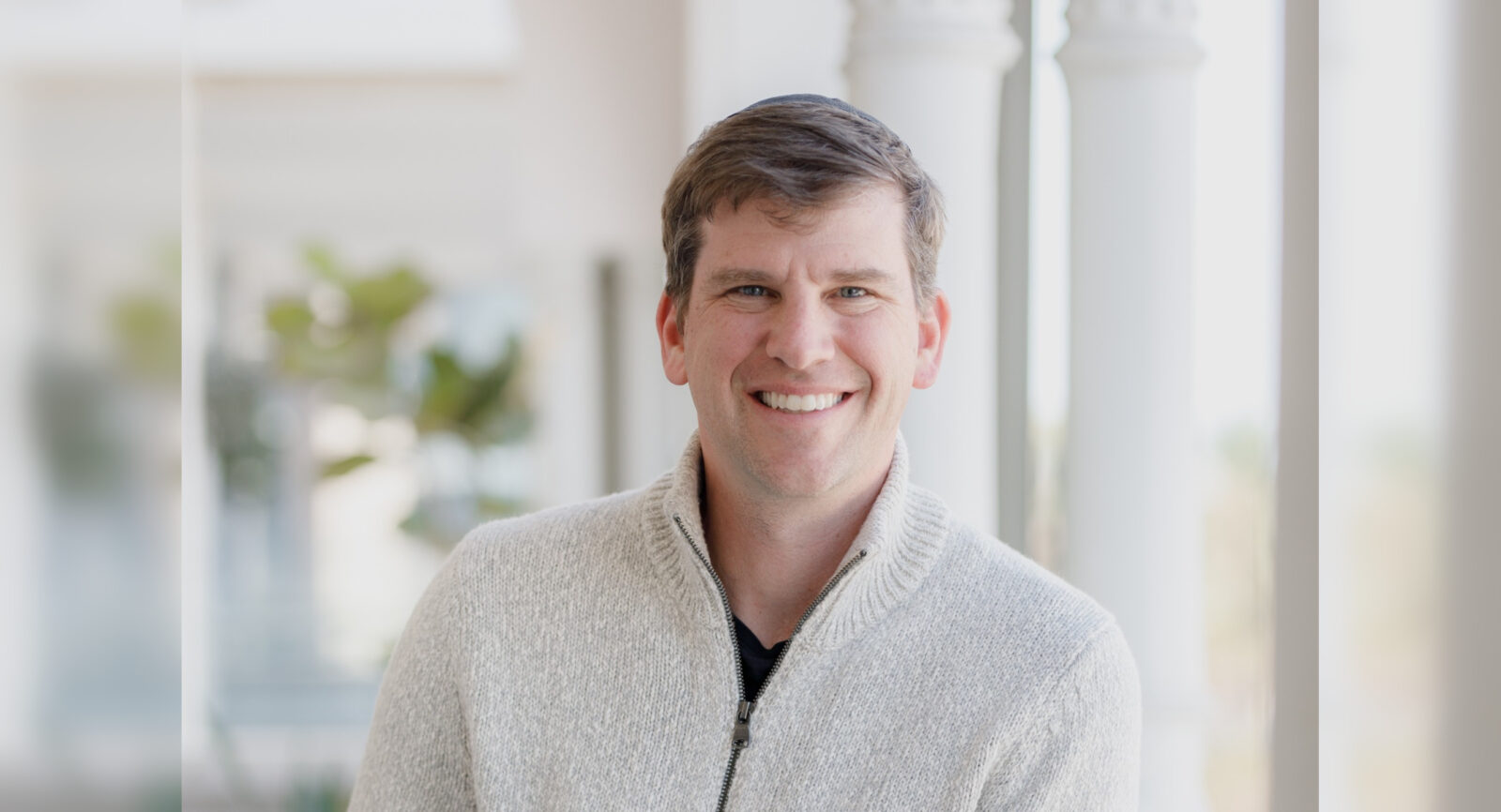 Michael Eisenberg of Aleph VC talks about his latest book, his insider perspective on WeWork and the investment he regrets not making

But Michael Eisenberg isn’t your average author — or your average venture capitalist. And Eisenberg is hoping his recently published book, Tree of Life and Prosperity: Principles of Economics and Business from Genesis to the 21st Century, will help bring his unique point of view to a much wider audience.

Eisenberg sat down with Jewish Insider for a recent interview in his sunny south Tel Aviv office, tucked inside a building that was constructed as a luxury hotel in the 1920s. The New York native and longtime Jerusalem resident is an energetic and youthful 48-year-old father of eight and grandfather of two. Eisenberg, the co-founder and equal partner of Aleph VC, has more than two decades of experience in the Israeli venture capital world, including at Israel Seed Partners and Benchmark Capital. He has led investments in companies including Wix, Lemonade, Nexar and Healthy.io — and was an early investor in WeWork, where he remains an observer to its board of directors.

Tree of Life, which Eisenberg wrote in Hebrew despite being a native English speaker, offers an exploration of economic theories and values linked to every Torah portion in Bereshit. The book originated with informal discussions at his Shabbat dinner table, expanded to a Whatsapp group and — when Eisenberg decided to get his thoughts in writing —  “I realized I had about 1,000 pages, including footnotes.” Eisenberg is working on translating and publishing an English version now, as well as writing the next four in the series — one for each book in the Torah.

“There’s something incredibly relevant about talking about economics and parshat hashavua,” Eisenberg told Jewish Insider. “My expectation is that this will appeal to an extremely broad audience. It’s exegesis, but it’s from an economic and business perspective… it’s a different view from probably what anybody’s written before about the Bible.”

In the hi-tech world, Eisenberg believes he is a rare breed for being not only religiously observant, but driven by religious values and ethics, that can at times clash with his business sense. He recalled an incident a few years ago where he made a deal to invest in a real estate project that, in hindsight, he felt was unfair. “I felt like I got the wrong end of the bargain, I wanted a better deal.” he recalled. “I felt like I deserved a better deal — but I shook the guy’s hand already.”

As he was contemplating the investment, Eisenberg spoke at a memorial gathering for Rabbi Aharon Lichtenstein, his rebbe and the rosh yeshiva of Yeshivat Har Etzion — “and I sat there and said, ‘What would Rabbi Lichtenstein have done?’ And I came to the conclusion that he would have honored the deal. And so I set my competitive spirit aside in that case, decided to honor the deal, and told myself one day this would be okay.” A year later, he said, he got the opportunity to renegotiate the deal “without having to break my word.”

The wall of one room in Aleph’s Tel Aviv offices is decorated with the names of its eclectic portfolio companies, which include WeWork, the client management platform HoneyBook, music software business JoyTunes, dashcam makers Nexar, the Lemonade insurance app and Luminate’s secure access cloud system — which was bought by Symantec.

The veteran investor said that over the years he has learned to trust his gut instead of conducting a deep analysis or attempting to make market predictions.

“I would say that the worst investing decisions I’ve made are the ones where I did too much due diligence and talked myself out of a good deal,” he said. “The ones you do that go wrong — you can only lose one times your money.” But if you don’t make an investment, he said, you live with regret when the company makes it big.

Eisenberg pointed to the Jerusalem-based photo and image editing app Lightricks — which received a $1 billion valuation earlier this year — as an example of a company he regrets not investing in. But he tries to let it go: “It’s bad in this business to live with regrets,” he said, “because then you make dumb decisions.”

Eisenberg is tight-lipped about his current role at WeWork, declining to answer several questions about the company that has dominated business headlines for several months. But he still offered an optimistic view of the future of the troubled business.

“There are scant few businesses that grow in nine, 10 years to over $4 billion of revenue,” said Eisenberg, speaking to JI before SoftBank’s $10 billion buyout, which includes Israeli founder Adam Neumann relinquishing control. “I think fundamentally, WeWork answers a need that the world needs right now. And the business continues to grow at a rapid rate.”

Eisenberg, who led an early investment round for WeWork in 2012 while a partner at Benchmark Capital, said he still believes in the corporation, no matter who is leading the company.

“The product developed by Adam and Miguel [McKelvey] was incredibly innovative,” he said. “Things grow and scale and sometimes the person who took you to one place, is not the guy to get you to the next place.” Eisenberg denounced the “press hoopla” around the company’s recent struggles, and said he hopes “we’ll get through all this for the benefit of the employees and partners and customers.”

While Eisenberg is passionate about driving Israeli job creation, in part to boost aliya, he still recognizes that many companies Aleph invests in will end up headquartered overseas.

“I believe business is left unfettered,” Eisenberg said, explaining why he would never make investments contingent on remaining in Israel. “But where do I invest? I invest primarily in Israel. Even in cases where the ultimate headquarters of the business end up in the U.S. — unless there’s an accident that happens along the way, which has happened — they’re going to create jobs and opportunities.”

The venture capitalist hopes to boost aliya to Israel by attracting immigrants with economic opportunities, rather than drawing new olim who fear a rise in antisemitism. But he’s not optimistic about the future of Judaism outside of Israel. Eisenberg’s second book, 2017’s The Vanishing Jew: A Wake-Up Call from the Book of Esther, argues that the Purim story is a cautionary tale for Jews living in the Diaspora.

“Antisemitism exists on the left fringe and the right fringe in equal amounts,” he told JI. “People are radicalizing the conversation and that’s never a good place for Jews to be.” And he’s worried that even the recent devastating attacks in Pittsburgh and Poway haven’t served as a wake-up call for American Jews. “I worry about it a lot. A lot a lot,” he said. “My wife always talks about the fact that people sent their art out of Germany, but not themselves.”

He recently launched a fellowship that will kick off next year, titled Unit 2100: Israel Tech Fellowship, to bring “very brilliant American college students to Israel in tech.” The fellowship is seeking to attract “elite computer science and engineering students from top programs upon graduation or early in their careers” and place them at Israeli tech start-ups, while easing them through the visa, apartment-hunting and acclimation process.

While Eisenberg is an ardent Zionist and supporter of the Jewish state, he doesn’t hold back on criticizing it. Turning to the current state of politics in Israel, he says it’s a “tremendous badge of shame that [politicians] haven’t been able to get their act together and put their egos aside to come together and form of government… I believe they owe an apology to the public.” Eisenberg said the election outcome made it clear that the voters want a “broad-based government,” and the party leaders need to get that message “or go home.”

He also has harsh words for the recent U.S. decision to pull troops back in Syria, even comparing President Donald Trump’s move to Neville Chamberlain’s policy of appeasement in Nazi Germany.

While Eisenberg is a successful and competitive businessman, he is unapologetic about making decisions based on his unwavering moral and religious beliefs.