The online event raised over $2 million for the CDC Foundation 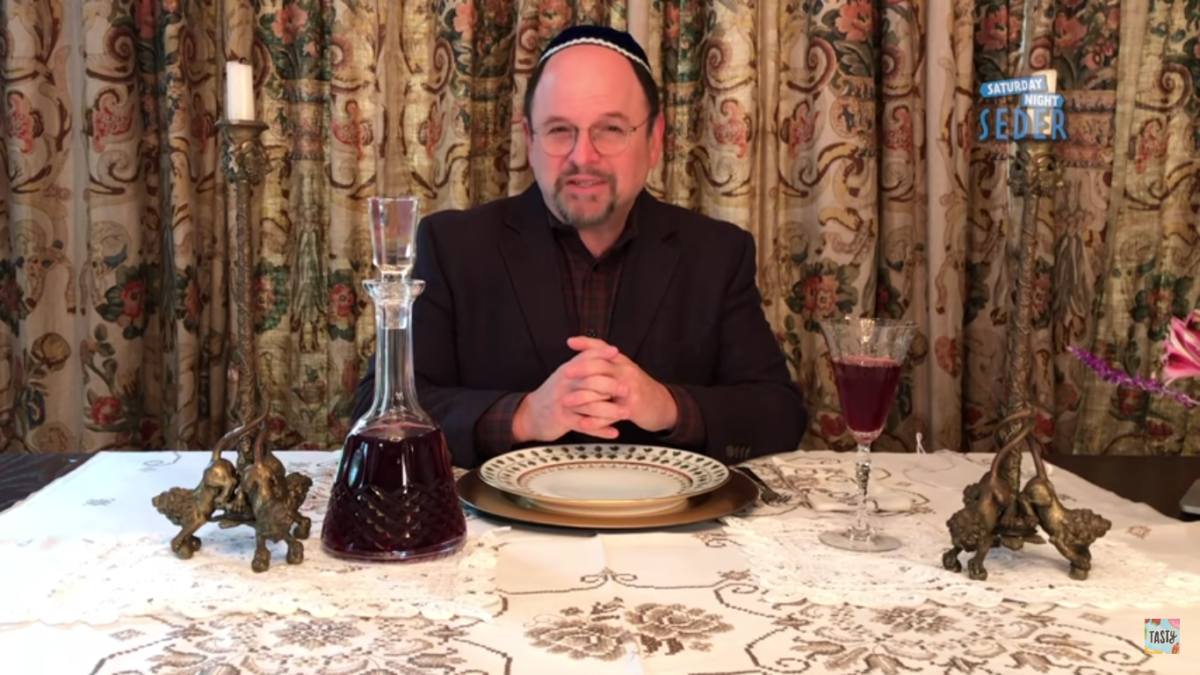 A veritable who’s who of Jewish — and non-Jewish — celebrities showed up for a “Saturday Night Seder” on YouTube this past weekend. The dozens of famous faces gathered — virtually — to tell the story of Passover and raise funds for the CDC Foundation. As of Monday morning, the show had been viewed more than one million times and raised more than $2 million.

Laugh track: The show opened with host Jason Alexander, who welcomed via song those who are “stressed by all the stories that you hear on cable news/ Well it’s time to trade the cable for a table full of Jews.” Singer Josh Groban, who admitted he is not a member of the tribe, sang that the goal is “to come together as one glorious mishpacha/ And guilt you into giving some tzedaka.”

Best bits: Fran Drescher demonstrated how to wash your hands to “The Nanny” theme song, Nick Kroll joked that his favorite part of “being a Jew is controlling the banks and the media,” Bette Midler showed up as a joke-cracking, pitch-perfect prophet Elijah, Andy Cohen led a virtual afikomen hunt and Josh Malina urged views to “give some tzedaka, motherf***er.”

Serious moments: It wasn’t all laughs. Rabbis Sharon Brous and David Wolpe provided insight into the meaning of the holiday, and Rabbi Mordechai Lightstone offered a message of Jewish unity. While Ben Platt sang “Somewhere Over the Rainbow,” Judith Light told the story of lyricist Harold Arlen’s immigrant family, as well as the countless immigration tales in Jewish history.

Next year in Jerusalem? Senate Minority Leader Chuck Schumer also made an appearance in the show, pointing out that Jews have “survived over the centuries by sticking together — giving each other strength and moral support and overcoming the worst of afflictions and persecution.” Next year’s Seder, he said, can be “maybe not in Jerusalem — but all together with our family and friends.” Schumer wasn’t the only politico in the show — Sarah Hurwitz, who served as former first lady Michelle Obama’s speechwriter, spoke about the heroes of the Passover story and the medical professionals on the front lines of the coronavirus crisis. Meanwhile, Broadway legend Harvey Fierstein said he never understood why anyone would want to go to Jerusalem, where “it’s hot and you’re surrounded by a vast majority of antisemites… you want proof that it’s a bad idea? Jared Kushner thinks it’s a good idea.”

Behind the scenes: The whole event came together in about two weeks, comedian and head writer Alex Edelman told JI. Edelman worked with songwriter Benj Pasek and Broadway performer Adam Kantor, along with a varied and extensive technical team including composer Mark Sonnenblick, audio producer Michael Moritz, producer Rachel Sussman and writer Hannah Friedman to get the program together. The New York Times reveals a handful of anecdotes along the way, including Alexander’s wife forgetting to hit the record button, and producers making sure Groban hit the guttural “ch” in Chad Gadya. Edelman told JI that the writers in the Zoom room “screamed” when Bette Midler agreed to play Elijah. “She said the script word for word and she gave a couple of riffs on it and it was exactly what we wanted.”

Symbolism: Edelman noted the irony of the timing of Passover this year. “I think the miraculous part of this thing is that it addresses that dark irony and tries to make sense of it. And because usually what we do is in our lives, we’re located in one point in the story. And so what those rabbis and comedians and musicians and writers and producers have done is help us make sense of being in another point in that story. And the symbolic resonance of plague right now is something that we wanted to address but not make maudlin.”

Family connection: Edelman’s father, who runs the intensive care unit at Boston’s Brigham and Women’s Hospital, appears at the end of the show. “He’s one of the people coordinating the responses of Massachusetts hospitals and universities to COVID. He was going into the hospital every day and then he’d come home and I’d be set up at my computer working on it. And so a lot of those nurses [in the video] are his nurses.”