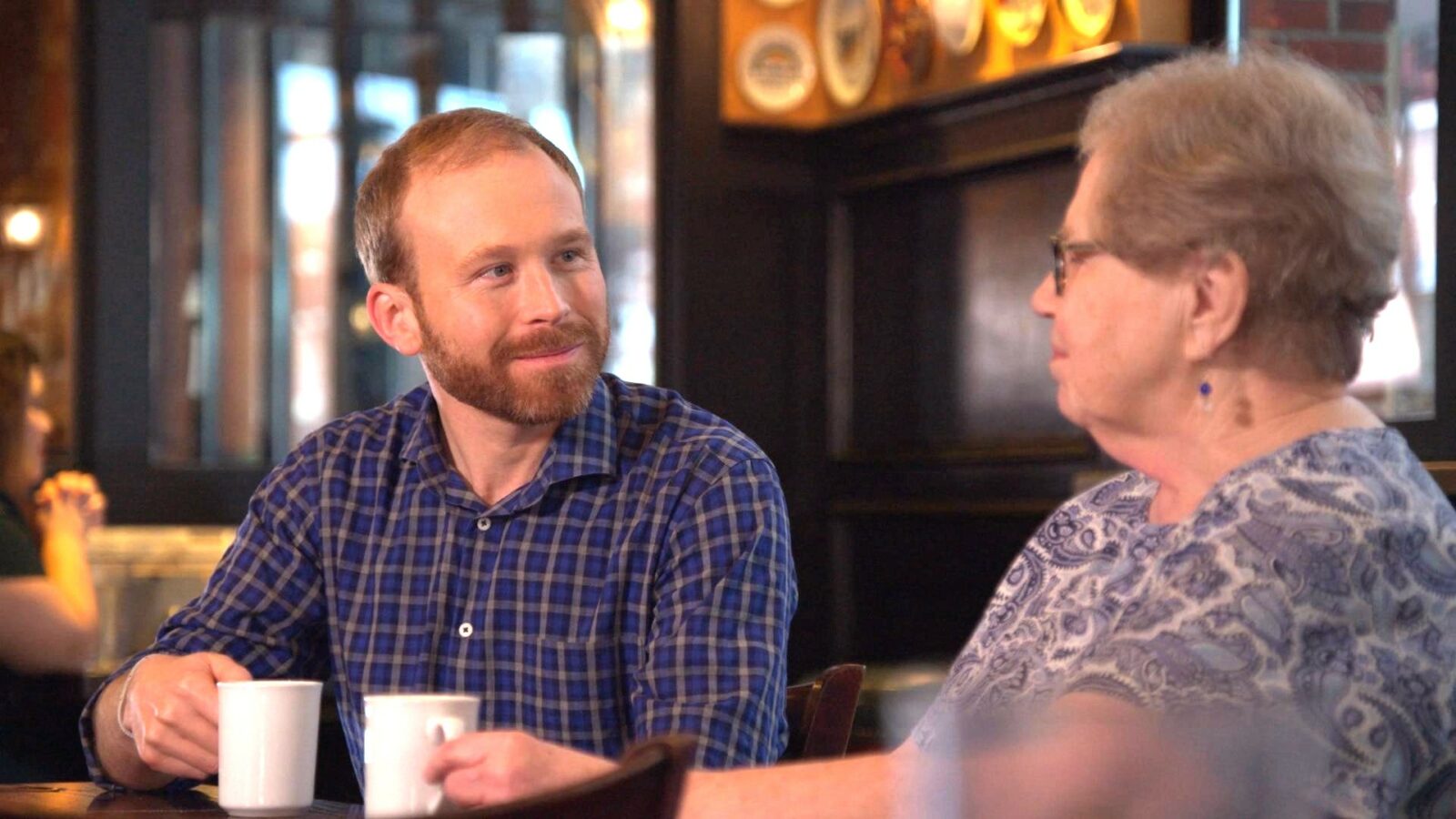 On a trip to Israel in October 2012, Pierce Bush visited Masada, the ancient desert fortress where, according to ancient scholars, a band of beseiged Jewish rebel soldiers chose to commit suicide rather than surrender to Roman troops. Though Bush was a long way from his native Houston, the story reminded him of a similar tale back home — that of the Alamo, the famous site of a protracted battle in which a group of Texian revolutionaries died defending the stronghold from Mexican soldiers.

“From a cultural standpoint,” Bush told Jewish Insider, “it spoke to me.”

There may be another reason why the legend of Masada resonates with Bush, the 33-year-old political scion — grandson of the late George H. W. Bush and nephew to George W. Bush, respectively the 41st and 43rd U.S. presidents — who is now running for office in Texas’s 22nd congressional district, a suburban swath of southwest Houston.

Ahead of the primary on March 3, more than a dozen candidates are vying to succeed Republican Rep. Pete Olson, who announced last summer that he would not seek re-election.

In recent years, the Bush name has come under siege in the Republican Party, representative of a kind of genteel conservatism that seems to have been negated in the age of Donald Trump. The Bush family has a strained relationship with the president, who notoriously mocked Jeb Bush as “low-energy” during the 2016 election cycle, in which H.W. — snubbing the GOP — cast his vote for Hillary Clinton instead of Trump.

Any Bush who wants to enter politics now must contend with this history. While Texas Land Commissioner George P. Bush has embraced Trump wholeheartedly, his cousin Pierce seems to have chosen a different and somewhat more cautious route. Rather than surrendering completely to the Trumpian impulses of the modern Republican party, experts say Bush is straddling a delicate line.

Mark P. Jones, a professor in the department of political science at Rice University in Houston, described Bush as a moderate at heart whose core values gravitate to the conservative center.

“But he knows that that doesn’t play in today’s current Texas Republican primary electorate,” Jones told Jewish Insider. So in an effort to survive on the campaign trail, Jones said, Bush has veered further to the right — particularly on issues like immigration — and pledged his allegiance to Trump.

To do otherwise would, perhaps, be a form of political suicide.

Bush’s pedigree is, of course, still an asset in the 22nd district, which was represented by former House Majority Leader Tom DeLay from 1985 to 2006. But he is up against a number of hard-edged candidates who have complicated his prospects.

Republican donor and candidate Kathaleen Wall, who has spent more than $3 million of her own money in the primary, is a frontrunner in the race who has aligned herself with Trump’s policies — vowing, for instance, to stop illegal immigration and build a wall along the border with Mexico. Another serious contender is Troy Nehls, a Fort Bend sheriff who is popular in the district.

Bush has managed to hold his own, raising more money than Wall and Nehls combined — more than $1 million, according to the Federal Election Commission — and notching endorsements from Olson as well as the Houston Chronicle.

In his December announcement video, Bush cast himself as a kindhearted, benevolent leader, touting his role as CEO of Big Brothers Big Sisters Lone Star, a Texas affiliate of the nonprofit youth mentorship organization, while warning of the evils of socialism.

At the same time, he has put forth some views that echo the president’s, vowing in one ad to “stop the cartels” and “deport criminal illegals” — policy points that have created some tension in his messaging.

“We need to be a shining light for the rest of the world in terms of foreign policy and stand for freedom,” Bush told Jewish Insider by phone Friday morning from a polling station in Cinco Ranch, a suburb of Houston, where he was greeting constituents on the last day of early voting. “I think freedom works.”

But he is also quick to praise the man who now occupies the Oval Office. “President Trump is doing a good job on foreign policy — I’d like to be on the record as saying that,” Bush said. “He intervenes when America’s interests are at stake, but he’s also kind of a non-interventionist and he’s shown to be someone willing to go have discussions with people and try to negotiate things in a favorable way for the United States.”

“I think it’s his responsibility to make tough calls,” Bush said, speaking more broadly about the president’s prerogatives as commander-in-chief. “I’ve been close to two presidents who had to make those calls. In a strategic way, it makes sense to me, because it’s his decision and it’s on his watch. And it’s a huge responsibility. The world is better without Soleimani, no doubt about it.”

He was equally complimentary of Trump’s Middle East peace plan, released in late January and overseen by Jared Kushner. “I think Jared’s a really smart guy,” Bush told JI. “And I’m sure whatever plan he presents is a good one, because I know he cares deeply about finding a peaceful solution and about our partnership [with Israel].”

Having visited Israel twice in the past decade, Bush told JI he believes the country shares similar values with the U.S., and he regards the Jewish state as a “tremendous partner.” His affinity for Israel — along with his vocal opposition to antisemitism — goes beyond politics. His sister Lauren is married to a Jewish man — David Lauren, son of fashion designer Ralph Lauren.

“My two nephews are being raised in the tradition,” Bush told JI. “And so of course I think we need to stand up to antisemitism. This is a compassionate country and our compassion has to be built around inclusivity and tolerance — and I personally don’t have time for antisemitism at all.”

He added, “I’m blessed to have friends in the Jewish culture, and it’s a rich culture, and it makes our country better. So, believe me — it alarms me, because there are people I love who are Jewish.”

In conversation, Bush is warm, engaged and affable, qualities that would seem to be at odds with some of the more hardline beliefs he has adopted. Such views have the potential to alienate voters in a district that is home to a number of immigrants and includes most of Fort Bend, one of the most diverse counties in the country — though they may redound to his benefit in the primary.

Still, Bush speaks with a sense of awe about his district — where he recently settled with his wife, Sarahbeth, and their golden retriever, Winston-Moose — that suggests a more inclusive brand of conservative politics.

“It’s a pretty amazing place,” he told JI, later adding: “You could say it’s a microcosm of what the country will be like in 20 years.”

Since the primary is so crowded, experts predict the frontrunners will split the vote in Tuesday’s primary, resulting in a runoff election on May 26 between the top two candidates.

“I would be surprised if Pierce Bush would not be in that runoff,” said Cal Jillson, an expert on Texas politics and a professor at the Dedman College of Humanities and Sciences at Southern Methodist University in Dallas.

Should he win the runoff, Bush may still have a fight ahead of him in a district — and a state — that has been shading purple in recent years. Though the 22nd is a historically Republican district, in 2018, Olson beat his Democratic opponent, Sri Kulkarni — who is running again this primary season — by a margin of just five percentage points.

Abhi Rahman, director of strategic communications for the Texas Democratic Party, told JI that he believes Bush will lose if he makes it through to the general election.

“Pierce Bush’s fate,” he said, “proves that the Trump name is stronger than the Bush name among Texas Republicans.”

The more immediate question, as the primary looms, is whether Bush’s name will function more as an asset or as a liability in a political climate that seems to favor brash Republican populism over the traditional conservatism that defines the Bush family.

“The Bush name still has sway with many Republicans,” said Brandon Rottinghaus, a professor of political science at the University of Houston, “but the challenge for Bush is to walk the line between an accessible conservatism associated with the family name and the more strongly conservative leanings of modern Republican primary voters.”

For his part, Bush is optimistic ahead of Tuesday’s vote. “I feel like momentum is on our side,” he told JI. “I think our message is resonating.”

It will be up to voters, then, to decide if Bush’s message is more Trump’s or his own — and, ultimately, if one matters more than the other.