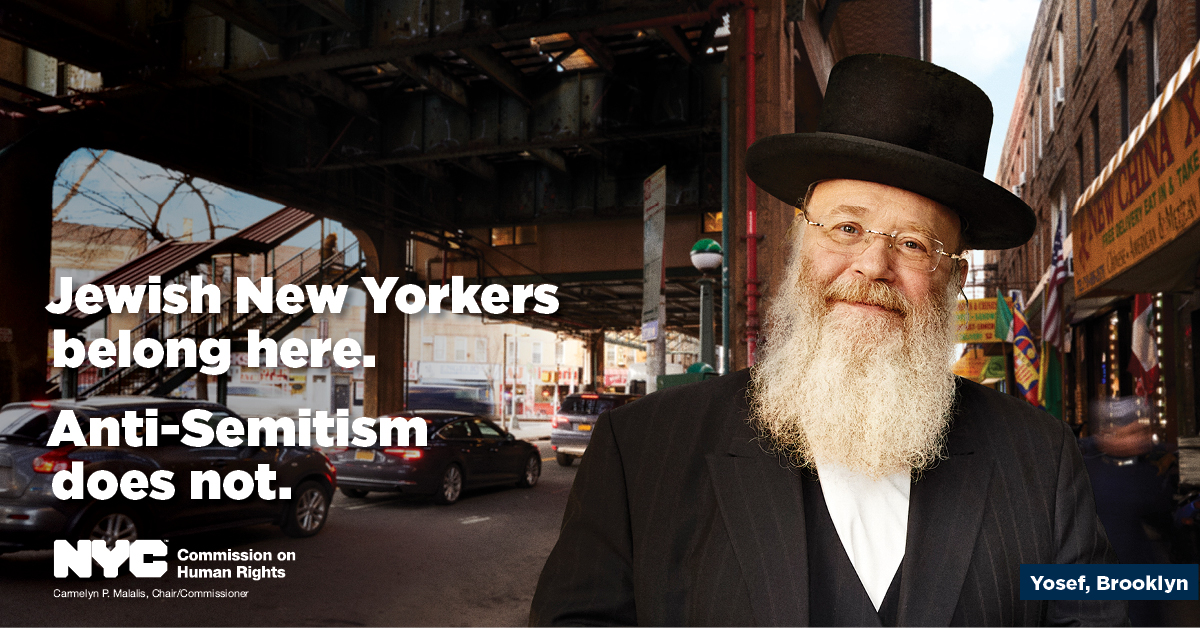 Amid a rise of antisemitism, the New York City Commission on Human Rights is launching an ad campaign in support of the Jewish community.

Reaching out: The campaign, which will run in several Hasidic and Orthodox Jewish print publications and online, seeks to reassure the Jewish community that the city is committed to combating antisemitism and religious harassment in the wake of recent antisemitic violence. “We will lift up and celebrate the diversity of Jewish communities, work to build a foundation of compassion and understanding between neighbors, and remain engaged in these communities to foster trust and healing,” Carmelyn Malalis, the commission’s chair, said in a statement. The print ad campaign also provides information on how to report harassment and discrimination to the commission.

Spreading the message: The online banners feature images of individual New Yorkers — two women, a person of color and a Hasidic man — with a message of solidarity that reads, “Jewish New Yorkers belong here. Anti-Semitism does not.”

Behind the campaign: “We thought carefully having not just about a Hasidic Jew but representing a wide range of Jews,” Rabbi Sharon Kleinbaum, one of the commissioners, tells JI. “The campaign did really careful thinking through about the images and about language and different ways of saying it.” The message of the campaign is “to say that this city care about us being here safely and to make a statement to other New Yorkers, that we don’t all look, sound or present the same but are an important part of the fabric of this city.”

Words of appreciation: Jewish leaders welcomed the effort. “In frightening times like these, it is reassuring to know that the governmental entity charged with protecting our most basic freedoms is focusing special attention on the cancer of Jew-hatred,” said Rabbi Chaim Dovid Zwiebel, executive vice president of Agudath Israel of America.