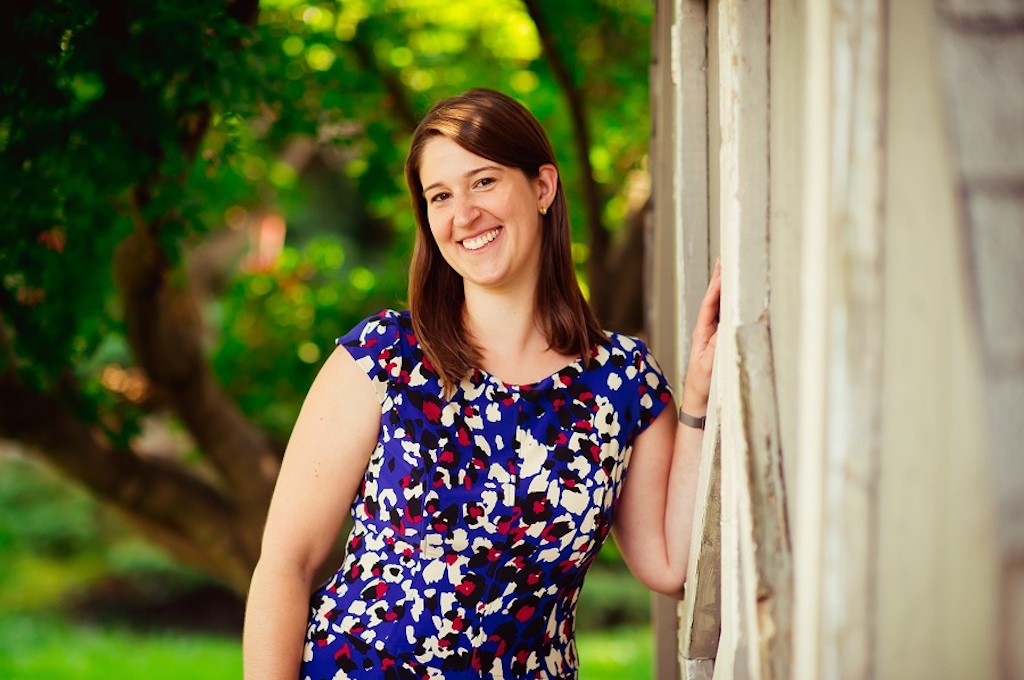 The woman behind the Jewish gender-equity revolution

“I’m a master engager. A relationship builder. A coalition builder.” Rachel Gildiner is reading from a well-worn notebook adorned with a faded “Gather the Jews D.C.” sticker. In that notebook, now approaching six years old, Gildiner wrote out why she was the right fit to be the first executive director at Gather D.C. — then called Gather the Jews (“Let’s not talk about that,” she says, laughing) — a group connecting young Jewish professionals in Washington.

When a friend told Gildiner about the job, she said her “very common female” response was to list why, at age 31 and with seven years of experience overseeing Hillel International’s engagement work under her belt, she was not ready for the position. It took this male friend’s encouragement, she explains, to get her to apply. But when she thought about her strengths, she realized she excelled at the most important part of the job: making people feel welcome when they enter an unfamiliar space looking for companionship and Jewish connection. At Gather, her territory grew from college campuses to the country’s sixth-largest metropolitan area, with 30,000 young Jews. She got to work figuring out what they wanted and how she could give it to them.

Unlike many of her neighbors in Washington, Gildiner does not work in politics. But she is “raising three feminists” — a son and two daughters — and tries to live out her values. She grew up in Philadelphia, where “most of my friends did not look like me,” before the immense culture shock of moving in fourth grade to suburban Cherry Hill, New Jersey, a place she described as a land of “white bread, white fences, white people.” Gildiner agonized over whether to send her kids to public schools, like she attended, but she and her husband decided on Jewish day school. Still, she tries to bring diversity into her children’s lives.

She watched in 2017 as women organized in response to President Donald Trump’s inauguration. Later in the year came the #MeToo movement. The following year was declared “the year of the woman.” Gildiner felt like this seismic shift felt by the rest of the country was not reaching the Jewish community.

The sense that she had to do something about it gnawed at her. Then, at a professional development conference in 2018, she noticed that nearly all of the sessions were led by men. Just one female scholar presented. “I really love and respect the men who were running it,” Gildiner says, but “it felt really bad and weird, and all the texts we looked at only had male pronouns, and only women volunteered to take the notes.” She got angry.

“I’d also been having conversations with women, mostly since 2016, about this rage that just keeps presenting itself,” Gildiner explains. “We all felt like we had a moment where we turned into the angry woman in the room.” At that conference, she resolved to do something about it: In September 2018, she published an article, titled “Let’s Make 5779 The Year of the Jewish Woman,” in eJewishPhilanthropy, a popular blog read by Jewish communal professionals. The goal, Gildiner says, was to “actually take action and say, for one year, we’re going to commit to raising our voices, knowing that we have the strength of thousands of women behind us.” With the article, she created a Facebook group called Year of the Jewish Woman, invited a couple dozen personal and professional friends, and waited to see what happened next.

On that first day, 500 people joined the Facebook group. Now, in December 2019, it has over 2,800 members. The group is at once a job board and a discussion circle, a space for empowerment and a receptacle for venting collective rage, a springboard for action and a perch to watch and learn.

Women from across the country share what Gildiner calls “the day-to-day workplace inequities that chip away at the worth of a woman”: Has anyone else had difficulty applying for a job while pregnant? What do you do when you start menopause and have hot flashes at the office? The group might be the most successful interdenominational and cross-political meeting ground in the Jewish community, with job listings spanning Yeshiva University, AIPAC, J Street and Bend the Arc, and posts calling out all-male panels at events.

The group’s biggest real-world victory is a sustained pressure campaign to get organizations to include salary ranges when they post open positions. Women tend to ask for lower salaries, so when employers are transparent about what they are willing to pay, women benefit. Gildiner hadn’t considered this before the group, but now Gather job postings include a salary range. “I also can be part of increasing equity on the day-to-day and through my organization, so now that’s what we do,” she says.

Gildiner is the group’s only moderator, and she sometimes tags the newest members to welcome them to the community. Those women introduce themselves in the comment section. Friendships form. Gildiner sees the Facebook group as a “natural outgrowth” of Gather’s work. “We’re trying to connect more [Jews in their] 20s and 30s to each other, and we do that really intentionally,” she explains. “To just create a vessel for Jewish women professionals to be able to find one another and connect about really important topics…feels very aligned.”

Scrolling through the group can give the feeling of an alternate reality, a “matriarchy,” where women call the shots. Since Gildiner took the helm at Gather five years ago, she says she has seen more women leading Jewish organizations. But data shows otherwise, at least at large national organizations. Of the 51 member organizations of the Conference of Presidents of Major Jewish Organizations — a who’s who, even if slightly outdated, of the big national institutions — only a third have female leaders, many of whom lead organizations that cater to women, including the National Council of Jewish Women and Hadassah.

The next step is to “call in” male allies, Gildiner says. One local ally is Gil Preuss, CEO of the Jewish Federation of Greater Washington, who meets regularly with Gildiner and four other women who lead area organizations, including the Sixth and I synagogue and the Edlavitch DCJCC. Preuss called Gildiner “phenomenal,” and said she’s elevated the issue of gender equity in a way that didn’t exist even three years ago. “People increasingly feel that’s their responsibility,” he says. One example he offers is the “manel,” or all-male panel: “I think it’s become pretty much unacceptable to have all-male panels.” Because of his friendship with Gildiner, and the example she’s set, he now asks, “What can I do as a person individually to change this dynamic?”

One challenge is getting men — even those who believe in the work — to understand that solving the problem of gender inequality will span the length of their careers. “Some men will point to one thing that they have done in support of women’s advancement and may have blind spots to all of the other areas that they can be working on,” says Tilly Shames, executive director of the University of Michigan Hillel, who frequently collaborates with Gildiner. Shames has a new project that grew out of the Facebook group: a website called LiveThePledge.com, with resources for male professionals.

The Facebook group is not Gildiner’s day job, and she is ready for others to help run it. “I want to keep letting go of it in bits and pieces,” she says. The project isn’t over, because achieving gender equity is not a goal that people can meet once and then move on from. But Gildiner has brought the Jewish community closer to it. “People are actually absorbing a strength and a solidarity, and a place for a voice that they can then bring out into the world with confidence and conviction,” she says. “I’m proud of that.”