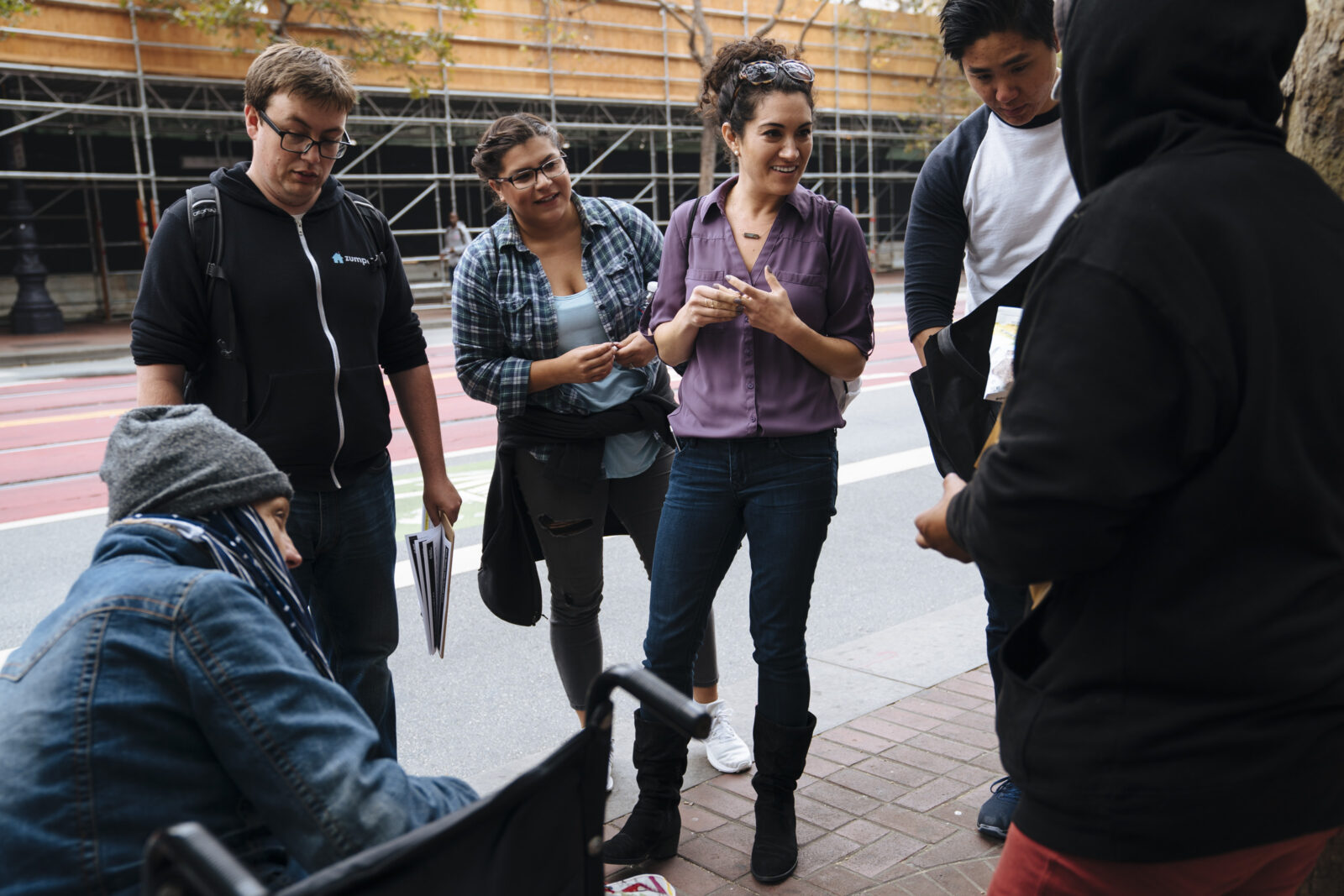 Jessica Donig uses the power of compassion to reunite families

One message can change a life.

That is the kind-hearted concept behind Miracle Messages, a San Francisco-based nonprofit that leverages the power of technology to help people experiencing homelessness to reconnect with loved ones.

Over the course of five years, the organization has restored social support for more than 250 individuals, getting nearly 40 of them off the streets altogether. The group has built an active cadre of volunteers, as well as an active network of volunteer helpers who contribute to the cause from afar.

Executive Director Jessica Donig is at the center of it all. The 34-year-old dynamo interfaces with clients every day, filming videos of them interacting with family members for the first time in years. Donig manages disparate teams of volunteers and champions the organization’s mission in the community.

She even stumps for donations as one of the group’s lead fundraisers — dishing out asks that always come from the heart. The Belmont native approaches her job with the same passion she brings to her Jewish faith — a yearning to lift others through caring and kindness.

“In many ways Miracle Messages is perpetuating a modern-day form of tzedakah, an obligation to give to those in need,” she said. “Being part of a defined people is about being connected to each other.”

Help to those who need it

No story about Donig or Miracle Messages can begin without first explaining how the organization works. Miracle Messages was founded by entrepreneur Kevin Adler in 2014 and aims to build new bridges between some of the 3.5 million Americans experiencing homelessness annually and the loved ones or family members with whom they’ve lost touch.

As the name suggests, the process revolves around messages. First, volunteers and partner sites can use a mobile app, telephone hotline, and referral forms to record messages from people experiencing homelessness to estranged loved ones. Volunteer “ambassadors” who walk neighborhoods and establish relationships with local homeless communities record messages on their smartphones and mobile devices.

Next, a global network of more than 1,200 “Miracle Messengers” acting as digital detectives coordinate efforts to scour public databases on the Internet to locate the loved ones and deliver the messages.

If those who receive the messages wish to respond, they work with volunteers to send back video messages of their own. They also can set up phone chats. Sometimes, the parties agree to meet up in person.

Most of the time, the result is simple: New connections among old friends. Since 2014, the group has recorded more than 1,000 messages, resulting in more than 250 reconnections and about 40 permanent housing situations. Parse the data even further and the recent stats are staggering: Between December 2014 and July 2017, when Donig came on board, Miracle Messages had reconnected 50 clients with loved ones; since July 2017 the group has reconnected 200 more.

Most Miracle Messages clients are in the San Francisco Bay Area, but the organization works with clients all over the country. The nonprofit has outposts in South Florida, Los Angeles and the Phoenix area.

According to Adler, each location operates with the same philosophy, leveraging redemptive messages to bring the messenger closer to his or her family.

“Our point of view is that neighbors on the street are not problems to be solved, [but] people to be loved,” he said. “By giving people [the] opportunity to be human, to say, ‘I love you,’ or ‘I missed you,’ or ‘I’m sorry,’ that opens up the door to rebuilding relationships of all kinds.”

It’s hard not to be inspired when hearing Adler talk about Miracle Messages; he started the organization after successfully reconnecting Jeffrey, who was homeless, with family members from whom he’d been estranged for 22 years. The reunion unfolded serendipitously; Adler filmed a video, shared it on Facebook, Jeffrey’s sister reached out, and the hometown had raised $5,000 to bring Jeffrey back.

Because it all happened during the holiday season, the story was all over the local news. Miracle Messages was born.

Donig joined the organization as a volunteer in early 2017. She had just moved to San Francisco’s Mission District from Oakland, and noticed a row of tents behind her building. Shortly after, she spotted a post online about Miracle Messages and thought it sounded interesting, seeing it as a way to get involved. She joined Adler for a shelter visit the following week.

She remembers the experience vividly — it was the first time she ever stepped foot in a shelter. Inside, Donig had a lengthy conversation with a woman who wished to reconnect with her brother. The woman’s message was clear: Tell him I love him.

Later that week, Donig and another volunteer found the brother. But Donig couldn’t summon the urgency to act on it right away.

“I look back and think about why I didn’t feel urgency for that woman and it’s because I couldn’t place her in the realm of people who would require my urgent attention,” she candidly admitted. “If that had been my mother and my mother was the one in dire circumstances and someone had sat on that message, I would have been devastated. From that point forward, my entire thinking changed.”

Shortly after her first trip to a homeless shelter, Donig joined Miracle Messages as the organization’s second full-time employee. Today she anchors the headquarters “office,” a small klatch of desks in a co-working space at the Westfield San Francisco Centre mall.

Donig had an eclectic career before diving into remediating homelessness. Most recently, she served as the first employee and vice president of operations for a medical technology startup named Call9, where she built the infrastructure to provide emergency and palliative care medicine to nursing home patients via telemedicine.

Before that, she worked at Stanford University, where she ran the clinical wing of the Daldrup-Link Pediatric Imaging Laboratory, and at the East Palo Alto Boys and Girls Club, where she served as director of academic programs.

One constant throughout her career: compassion. During her time as a researcher at Stanford, Donig created art to illustrate journals for scientists. She also painted nature scenes to brighten radiation treatment rooms at a cancer center. She still paints in her spare time today — some of her art adorns the walls of hospitals in the Bay Area and is available online.

In her early days at Miracle Messages, Donig befriended and mentored Jena Hosking, a client who later became a volunteer. Today, Hosking describes Donig as “supportive” and “authentic,” and credits Donig with inspiring critical transformations in her life.

“[Donig] once told me she couldn’t do her job without having me here to help,” said Hosking, who has struggled with housing security for nearly 20 years. “She has a calm and confident demeanor that instantly puts people at ease. She’s real. She understands language. Most important is that [Donig] sees people experiencing homelessness as people who are deserving of help and attention. When you’re one of those people, knowing someone sees you this way means everything and makes a huge difference.”

For Donig, this approach is representative of her Jewish upbringing. She grew up attending the Temple Beth Jacob in Redwood City, California, and attended the North Peninsula Jewish Community Day School, a school her father started.

When she first learned that Adler was a practicing Christian — on more than one occasion he’d described Miracle Messages as a manifestation of “What Would Jesus Do with a Smartphone” — she thought hard about whether the job would be the right fit. She sought to figure out how she could reconcile this approach with her Judaism so she could live her values at work.

“To me, the Torah is about human frailty and human failings and how being accountable to each other gets us through,” she explained. “In that framing, Miracle Messages seems like the most Jewish thing in the entire world.”

She continued: “I want the Jewish community to take responsibility for how people treat each other on the streets. It’s so important to be good to each other and to see each other.”

Sometimes Miracle Messages comes up empty on its attempts to reestablish bonds between people experiencing homelessness and their loved ones.

Donig estimated that between 10 to 15 percent of family members decline the opportunity to reconnect with Miracle Messages clients and request privacy. Still, she said, those statistics offer a pretty reliable outlook of hope.

“When you get ‘No’ 10 percent of the time and 90 percent of the time you get people saying, ‘This is a gift from God,’ it buoys your spirits,” she said. “If I was in isolation doing this, I would have quit a long time ago because it feels horrible when you strike out. Thankfully, I work with people who remind me that we’re working with the hardest-to-reach population out there, and any successes are successes worth celebrating.”

Converting these missed connections fuels the organization’s continued growth. Another initiative in the works for the future: Additional training for clients and volunteers in the areas of empathy, overcoming fear, managing shame and navigating public health services.

Ultimately, Donig hopes Miracle Messages not only enables those currently experiencing homelessness to re-establish family lives but also changes the way people perceive those who aren’t fortunate enough to have safe and secure homes.

“Think about the person sitting across from you and ask yourself — what if you only defined that person as a ‘housed’ person?” she asked. “Down the road we want to get people to think more expansively about people they’re meeting as people. When you think about someone as a person, when you truly see a person for who and what they are, anything is possible.”

Matt Villano is a freelance writer and editor based in Healdsburg, California. To learn more about him, visit whalehead.com.