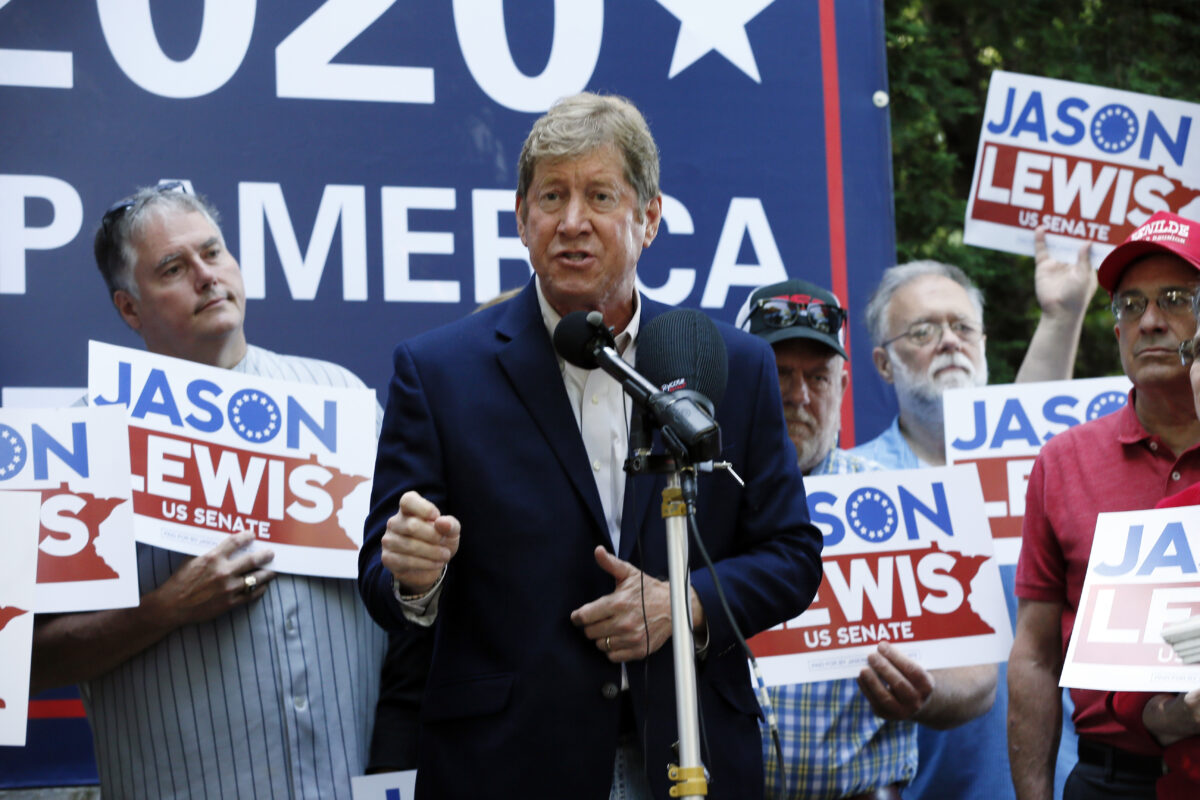 Republican and former U.S. Congressman Jason Lewis announces his run for a Senate seat in Minnesota Thursday, Aug. 22, 2019 at the State Fair in Falcon Heights, Minn.

A candidate for U.S. Senate is under fire for comments alleging that the “Jewish lobby” controls the Republican Party.

Republican Senate hopeful Jason Lewis, the current frontrunner to challenge incumbent Democratic Sen. Tina Smith in Minnesota next November, made the comments in 2013 on a radio show he hosted at the time. The comments were first reported by CNN.

“I don’t think the Jewish lobby, the Israeli lobby controls America because there are plenty of opponents,” said Lewis. “I do believe, as I said, they are controlling the Republican party.”

A former one-term congressman, Lewis also said Republicans had dual loyalties to Israel and alleged that former U.N. Ambassador John Bolton was a dual citizen of Israel and the United States. Bolton, who left his post as national security advisor to President Donald Trump last week, is not a dual citizen.

Lewis also claimed that “neoconservatives in the Republican Party from John Bolton on down view Israel as a 51st state.” He added, “and if you dare, dare not to support what Israel does, if you dare not support going to war with Iran — so Israel is safe — you are not only not a good Republican, not fit to be Secretary of Defense, you are an antisemite.”

The Minnesota Republican has often criticized Congresswoman Ilhan Omar (D-MN), who has made controversial statements about the U.S.-Israel relationship, including a claim in February that political support for Israel was “all about the Benjamins.” Leading Democrats and Republicans at the time denounced her remarks as antisemitic.

In his campaign announcement in August, Lewis depicted Smith as a stooge of Omar, saying “I refuse to sit back on the sidelines and watch our state, country and way of life continue to come under blistering attack from radical politicians like Ilhan Omar and her footsoldier Tina Smith.”

In a statement to Jewish Insider, Democratic Majority for Israel CEO Mark Mellman condemned the remarks and tied them to the vote taken by Congress in May after Omar claimed that supporters of the U.S. alliance with Israel were “push[ing] for allegiance to a foreign country.”

“Republican Senate candidate Jason Lewis’ vile antisemitic remarks must be condemned by every decent American. The U.S. House of Representatives declared in a 407-to-23 vote that accusations of dual loyalty, like those made by candidate Lewis, are antisemitic. Lewis’ statements take already antisemitic allegations of dual loyalty to new extremes by wrongly claiming that John Bolton and other U.S. officials were actually ‘dual citizens’ of Israel and the United States. Lewis’ claim that the ‘Jewish Lobby’ controls the GOP through ‘money’ is both factually false and morally reprehensible.”

Friday afternoon, Republican Jewish Coalition Executive Director Matt Brooks tweeted, “What [Lewis] said about the Jewish community and their role in US policy as a “shock jock” was indeed shocking. It is unacceptable and indefensible and even if meant to be provocative to his listeners, it has no place in our discourse… In judging [Lewis] one must also look at his time in Cong after his radio career. During his tenure he had an outstanding record of support for Israel and always stood with the Jewish community. He deserves credit for his support and rebuke for his shock jock comments.”