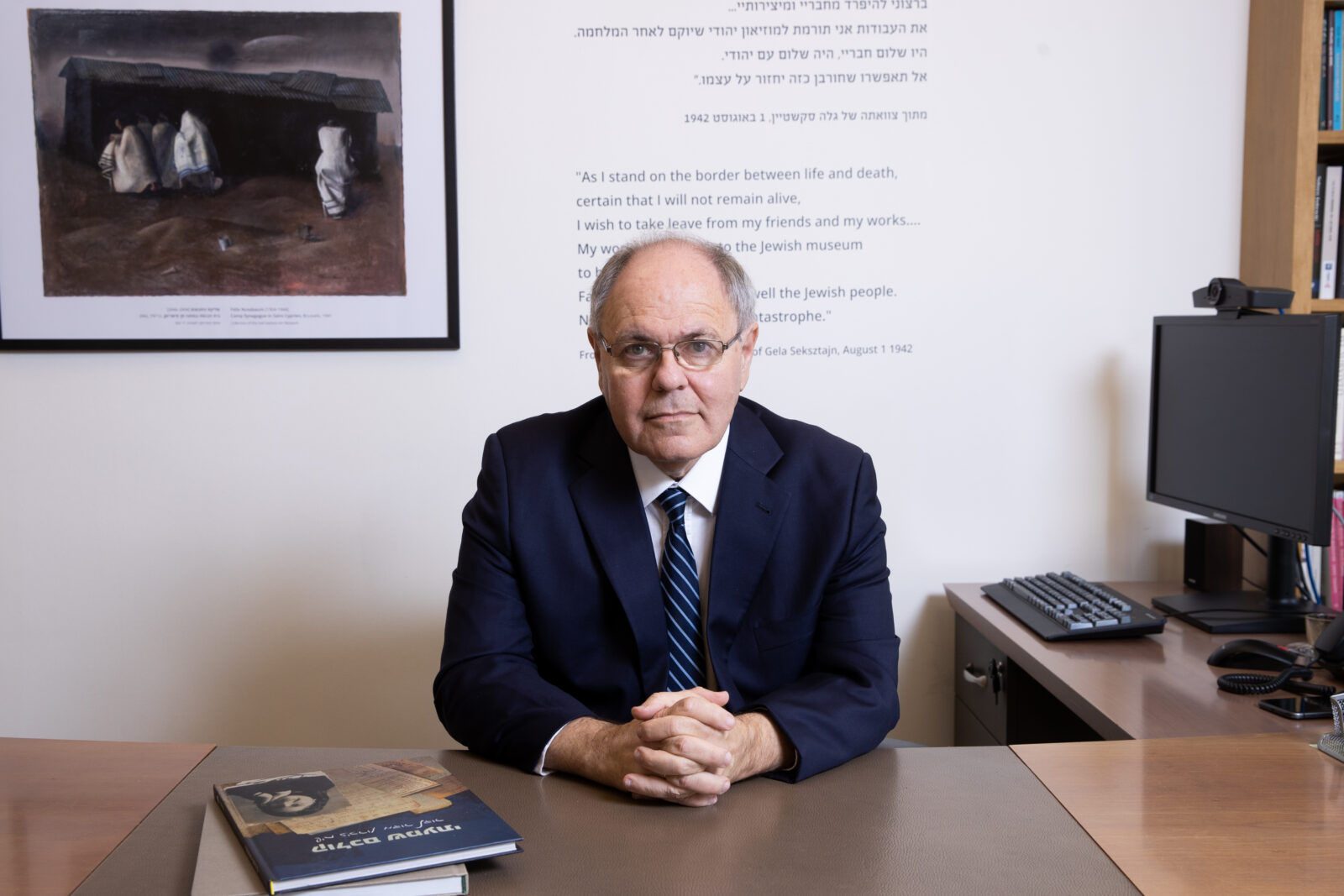 As an immigrant to Israel, a secular former leader of the country’s mostly religious settler movement and a former envoy for the Jewish state, Dani Dayan has spent his life bridging divides between Jewish communities.

Appointed chairman of the World Holocaust Remembrance Center, Yad Vashem, a year and a half ago, Dayan, who spent the prior four years as Israel’s consul general in New York told Jewish Insider that while ensuring the horrors of the Holocaust are never forgotten is not an optimal way of uniting a people, it is a powerful force in overcoming the increasing ideological and religious divisions polarizing world Jewry today.

“One of my mottos is something that I read from a speech given by Menachem Begin in August 1948,” Dayan, 67, told JI. “He said that the Mediterranean shore is not the limit of our people, it’s not the boundary of our people, and I am a great believer in that.”

“I’m very passionate about the Israel-Diaspora relationship,” he continued, “and I intend to bring that passion for Jewish unity to Yad Vashem.”

At a time when division both among and between Jews in Israel and in the U.S. appears more rife than ever, Dayan, who also spoke extensively about witnessing the rise in antisemitism in the U.S. during his four years in New York, said that “Holocaust remembrance, Holocaust education, Holocaust awareness, has the potential to be a unifying force.”

Born in Buenos Aires in 1955, Dayan immigrated to Israel as a teenager and today lives in Ma’ale Shomron, a West Bank settlement. He became a well-known public figure between 2007-2015, when he served as chairman of the Yesha Council, an umbrella organization for Israel’s West Bank settlements. Despite being a key leader in the largely religious settlement movement, Dayan has remained secular.

In 2016, Dayan moved to New York and was suddenly struck by weird feelings of déjà vu living once again as a Jew outside of Israel. “I didn’t understand how impactful the fact that I was born outside of Israel has been in my life until I arrived in New York,” he said. “I believe that it helped me a lot when I was in New York, and I think it will also help me here in Yad Vashem.”

While most of his family had already escaped Europe for either Argentina or Israel long before World War II and the horrors of the Holocaust, Dayan still describes himself as “a Jew with deep historical conscience,” a factor that is now guiding him at the helm of Holocaust research, education, preservation and remembrance.

Recalling his first day on the job in August 2021, the former envoy said he noticed a quote on the wall in the Museum of Art that quickly became his modus operandi. The quote, which Dayan later had etched onto a wall in his office, comes from the last will and testament of a Jewish painter who perished in the Warsaw Ghetto.

“As I stand on the border between life and death, certain that I will not remain alive, I wish to take leave from my friends and my works…. My works I bequeath to the Jewish museum to be built after the war…,” reads Gela Seksztajn’s words, written in August 1942. She is believed to have died the following year, but no official records of her death exist.

During his first few months on the job, Dayan commissioned a team of experts to create a single marketing message that would define Yad Vashem’s work and the lessons of the Holocaust, but quickly realized that “it’s impossible to have only one message.”

“I think that the Shoah is an event so wide, so vast, so multifaceted and the time that has passed since it happened, just 80 years, is basically a blink of an eye in historical terms, that it’s impossible to dilute the Holocaust into one message,” he admitted. “Our mission is to tell the story in as many innovative and engaging ways as possible, to different audiences, with different techniques.”

Dayan’s broad approach is reflected in two exhibitions that Yad Vashem is launching this week for International Remembrance Day, which falls on Friday. The first, to be put on display in the Bundestag, the German parliament in Berlin, is a collection of 16 original artifacts from the center’s vast archives, each from a different district making up the Federal Republic.

Although he refrained for many years from visiting the country that carried out the Holocaust, Dayan will make his first visit to Germany to inaugurate the exhibition on Tuesday.

“I didn’t refrain from visiting Germany out of hate, I refrained from visiting Germany because it helped me remember the terrible things that happened there,” he explained. “Now, going there as chairman of Yad Vashem has a huge impact on remembrance, so the same reason – the desire to promote and strengthen remembrance – that prevented me from going to Germany is the reason that brings me to Germany now.”

The second exhibition, set to open in the United Nations headquarters in New York on Thursday in the presence of U.N Secretary-General Antonio Guterres, will feature a gigantic Book of Names containing the names of some 4.8 million victims of the Holocaust — the names of all known victims. Created by Yad Vashem for the permanent exhibition located in the Auschwitz-Birkenau State Memorial, placing an additional copy of the book in the halls of the international body, Dayan said, is Yad Vashem’s “contribution to reminding the U.N. why it was founded.”

In Jerusalem, Dayan shared with JI his future plans for Yad Vashem, from creating an educational center dedicated to remembering Jewish communal life wiped out during the Holocaust to boosting overall education among the country’s minority communities – the Haredi and Arab populations.

“Unfortunately, we are approaching the post-survivor era, the post-witness era, obviously, I still hope it will take many more years but inevitably it will come and when that happens the task of Yad Vashem, as the flagship of Holocaust remembrance, will become much more difficult but also much more important and much more vital,” he emphasized.

“Today, it’s hard to believe that in the previous century, [U.S. special antisemitism envoy] Deborah Lipstadt was taken to court by Holocaust denialist David Irving, who was considered, quote unquote, a respectable person,” he said. “Today no serious intellectual, no serious politician, no serious journalist, with the exception of Iran or a few places in the Islamic world, would dare deny the Holocaust.”

The biggest dangers today, said Dayan, are Holocaust distortion and trivialization, especially from countries in Europe that continue to downplay their roles in the mass genocide of the Jewish people during the war. He also said that while Holocaust education is not the ultimate cure for rising antisemitism worldwide, it is an essential part of tackling the phenomenon.

“When I greet dignitaries at Yad Vashem, I tell them that there are many lessons to learn from the Shoah, but I choose to share two with them,” Dayan said. “One is the vital necessity of a Jewish state, even at a time when the notion of a nation-state in some quarters is going out of fashion, the Shoah teaches us that we need an independent Jewish sovereign state; the second is about antisemitism.”

“I’m not claiming we are in Europe of the 1930s, we are far from it,” he continued. “But there is one difference between now and the past, Jewish and not-Jewish, and that difference is that we have experience.”

“In the past, they probably thought ‘OK, they burn books [and] that’s bad, they burn synagogues [and] that’s even worse, but they will never burn human beings…’ Today we know that they can,” said Dayan. “Therefore, the lesson world leaders need to know from the Shoah is that when you see antisemitism don’t wait, confront it vigorously, decisively and immediately before it develops into monstrous dimensions that you can’t stop.”