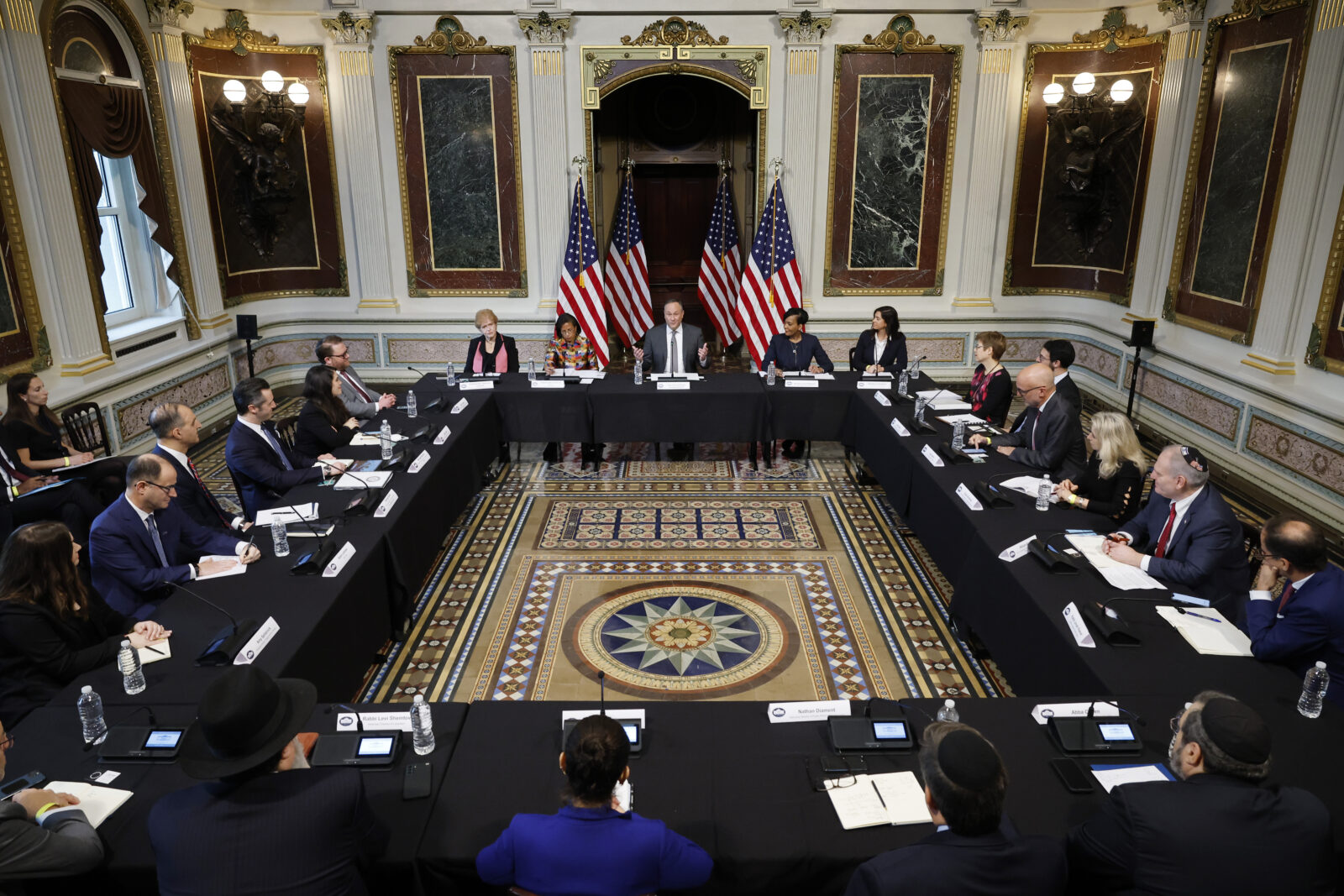 According to those present, a push for a formalized interagency strategy to combat antisemitism domestically — also highlighted in a congressional letter this week — came up frequently in remarks from Jewish community representatives. And in interviews with Jewish Insider following the meeting, nearly every one of the attendees expressed support for such a move.

“We think tying all these efforts together, both from security- and non-security agencies, to develop a comprehensive strategy that doesn’t just securitize the issue of antisemitism, but also allows for innovation, new data sets and an opportunity to combat it and all its forms,” George Selim, the Anti-Defamation League’s senior vice president for national affairs, explained. “We think that’s where the future lies on this issue.”

American Jewish Committee CEO Ted Deutch noted that assembling a national strategy for combating antisemitism would likely mean that “we won’t have to keep going back with specific asks.”

“Everything that we’ve talked about from security, to education, to the need to combat Holocaust denial, to working together against white supremacy and working with other coalition groups — all of that will be part of a plan,” Deutch explained. “That’s why it makes so much sense for us to work together to craft that plan so that we can spend time actually implementing it.”

Antisemitism on campuses was also a significant focus among speakers. Among the attendees was Julia Jassey, the CEO of Jewish on Campus, who is also a student at the University of Chicago.

“Students are the ones on the ground experiencing it,” Jassey emphasized to JI. “As a college student, as a 21-year-old woman, having the opportunity to have my voice valued by the administration is very, very impactful, and I think something that wasn’t just moving to me but affected a lot of young Jews in the community.”

Adam Lehman, CEO of Hillel International, added that he’s hoping that the administration will pursue codifying guidance that antisemitism is a form of prohibited discrimination under Title VI of the Civil Rights Act.

Elana Broitman, senior vice president for public affairs at the Jewish Federations of North America said she also addressed the spread of antisemitism from college campuses into high schools and middle schools, as well as the encroachment of antisemitism into the corporate world.

Multiple leaders said they also re-emphasized the need to increase funding to the Nonprofit Security Grant program as Congress finalizes its 2023 spending legislation.

“Orthodox and other identifiable Jews — men, women and children — just walking down the street and being assaulted, chased, kicked, and verbally abused,” Cohen said. “These incidents don’t make headlines but nonetheless instill 24/7 fear just to go outside.”

“Antisemitism didn’t start yesterday and it’s not going to end this afternoon,” Rabbi Levi Shemtov, executive vice president of the American Friends of Lubavitch, said. “But this afternoon, something did happen, which is going to send a strong signal that an effort is being created to confront and mitigate this wildly spreading disaster.”

William Daroff, CEO of the Conference of Presidents of Major American Jewish Organizations, and others noted to JI that the Jewish community largely spoke in with one voice at the session.

“There was really no disagreement of note,” Daroff recounted, “but an incredible amount of agreement about the need to address antisemitism by the federal government, as well as thanks for the Biden administration for bringing us together.”

Sheila Katz, CEO of the National Council of Jewish Women, told JI that many of the Jewish community speakers also emphasized how antisemitism has been a personal concern for many of them, with some speakers offering “painful” stories about their own experiences, making the discussion feel “much more personal” than many White House policy events.

“To hear somebody talking about, if they’re Orthodox, that their kids are feeling unsafe walking where they’re going [with visible Jewish symbols], to hear people questioning whether they should be going to synagogue, to hear from the college student that people sometimes are thinking [that] they should hide their Jewishness — these kinds of themes of personal stories for ourselves, for our organizations, for our family, and loved ones, came up almost in everyone’s remarks,” Katz said.

Officials did not offer significant feedback or hint at specific next steps during the meeting, but administration officials said after the roundtable that they saw it as a first step in a broader process.

“We are all very focused on this, from Capitol Hill over here to the White House,” Deputy White House Press Secretary Emilie Simmons told JI. “And I think you can expect us to continue working together, keeping our folks at the table to figure out what can be done.”

Deputy Special Envoy Aaron Keyak emphasized to reporters in a phone interview following the roundtable that the administration plans to “work together based off of the recommendations… and figure out what’s the best path forward.”

“As far as the specifics, the first step in this process is convening the meeting,” Keyak continued. “And then we’ll take a look at the various ideas, consult individually, one on one with some of the leaders, consult with our counterparts in government and decide the best way to move forward.”

The meeting, according to attendees, went half an hour beyond its allotted hour, and those in the room praised the White House team for their attentiveness — multiple attendees praised senior officials for taking what appeared to be extensive notes.

Attendees offered high praise for Emhoff, who has become a leading voice in the White House’s efforts to combat antisemitism and support the Jewish community.

Amy Spitalnick, executive director of Integrity First for America, said Emhoff’s embrace of his Jewish identity was “deeply important to me.” “That sort of visibility, and more broadly, the administration’s willingness to use its bully pulpit to take on this threat at this crucial moment is key,” she continued.

Rabbi Jacob Blumenthal, the CEO of the United Synagogue of Conservative Judaisim, said it appeared each of the administration representatives who spoke at the meeting “really felt [this issue] personally” and that “this was not just an issue of policy” to them.

While the meeting came on the heels of rapper Kanye West’s public embrace of Nazism and other antisemitic tirades, Keyak emphasized to reporters that the roundtable was not convened in response to any particular incident or incidents. He described the event as a follow-on to the White House’s broad-based United We Stand summit on hate and extremism earlier this year.