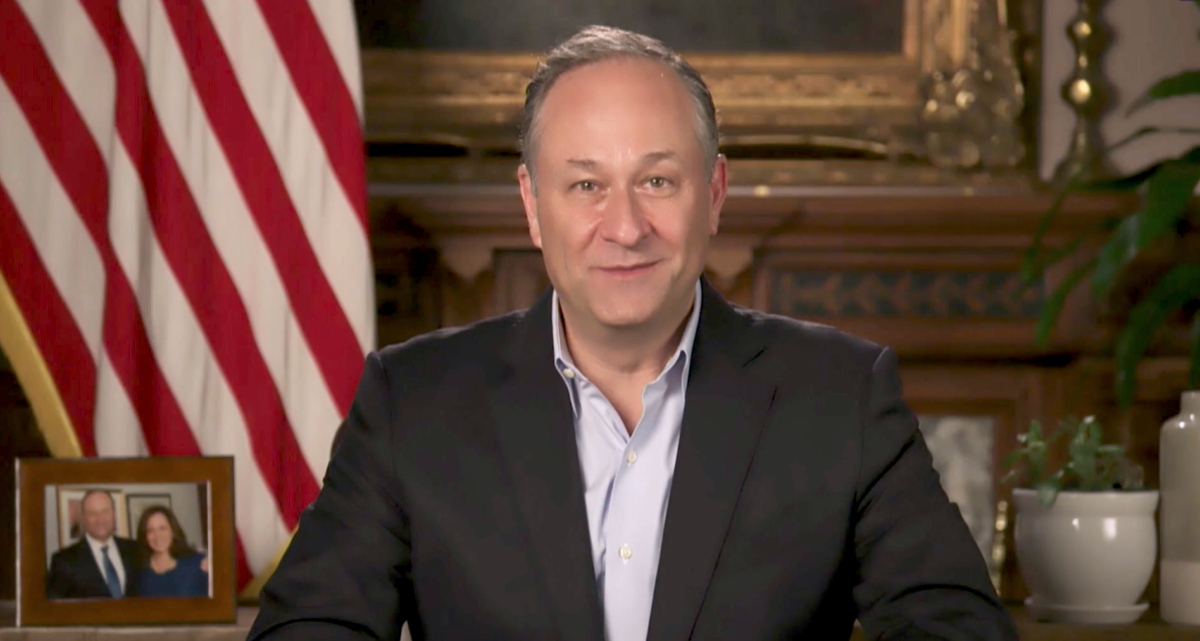 Speaking at the American Jewish Committee (AJC) Los Angeles’s virtual annual meeting, Second Gentleman Doug Emhoff got candid about his experiences as the pioneering first Jewish spouse of a vice president and how his early legal work informs his present activities.

Year in review: In conversation with Scott Edelman, the immediate past president of AJC’s L.A. chapter, Emhoff reflected on the ways in which his life changed since the beginning of the pandemic. “March 12 [2020], I went to D.C. from L.A. for what I thought was a long weekend, and I never left for almost a year,” he said. “So from March till August, I was like everyone else out there, trying to get through COVID, and deal with work and family and that horrible experience that we’re hopefully getting out of.”

Ticket time: “Then in August,” Emhoff recalled, “we got put on the ticket. And that was a complete and massive change, not only to get out of COVID, but then all of a sudden, to be on the road during COVID for this campaign. So we get through that, and then we won. And now you have this transition period, which was difficult and challenging, but also completely different from the campaign. And then on January 20, we had the inauguration, which was then this whole other new experience that we’ve now been in almost five months, which was completely different from anything else I had just done. So think about all that change that I have undergone, in a year or so. And so it’s a little head-spinning.”

Speaking out: The second gentleman recognized his pioneering position representing the Jewish community at one of the highest levels of government during a time when antisemitism is on the rise. “I take it very seriously, you know, being the first Jewish spouse of any president or vice president, and I understand what that means. And I understand that role. And I’m very grateful I’m able to do things like the Passover Seder and others, and I will continue to do that in the future,” Emhoff said. “I’ve been speaking out on this publicly. I’ve been doing everything I can behind the scenes on the issue of antisemitism, and I will continue to do that as strongly and as forcefully as I can, and assist this administration any way I can on this issue.”

New traditions: This Passover, Emhoff hosted a first-of-its-kind virtual Seder that brought together administration officials and community leaders. “To this day, people come up to me — even this past weekend — and bring it up, and talk about what it meant to them. So hearing what it meant to them, it just makes it all the more impactful to me,” he explained. “There had never really been a public Seder before in the White House. There had been some Seders, but nothing like this. And so we decided we wanted to do something different. We had no idea it would work. We didn’t have any idea if anyone would show up. And it turns out tens of thousands of people logged in, and then were able to see it and experience it with us. I get emotional thinking about it and talking about it because of what it meant to others, and what it meant to my own family. And we certainly look forward to keeping up this tradition as well, going forward.”

Justice department: Emhoff described his involvement as a young lawyer with Bet Tzedek, a California-based legal aid organization that provided assistance to vulnerable populations. “It was really the justice angle — you know, bet tzedek, justice — and I was so impacted as a young lawyer… going downtown to court, and just seeing all those folks in need, and that’s just affected me. So I had the opportunity to actually work on cases pro bono. [I] wanted to hone my skills as a lawyer, but you really represented a client, and they needed you whether it was an unlawful detainer action, or a consumer fraud action, you name it, I did it. And 30-plus years later, you still remember those faces, you still remember those cases.”