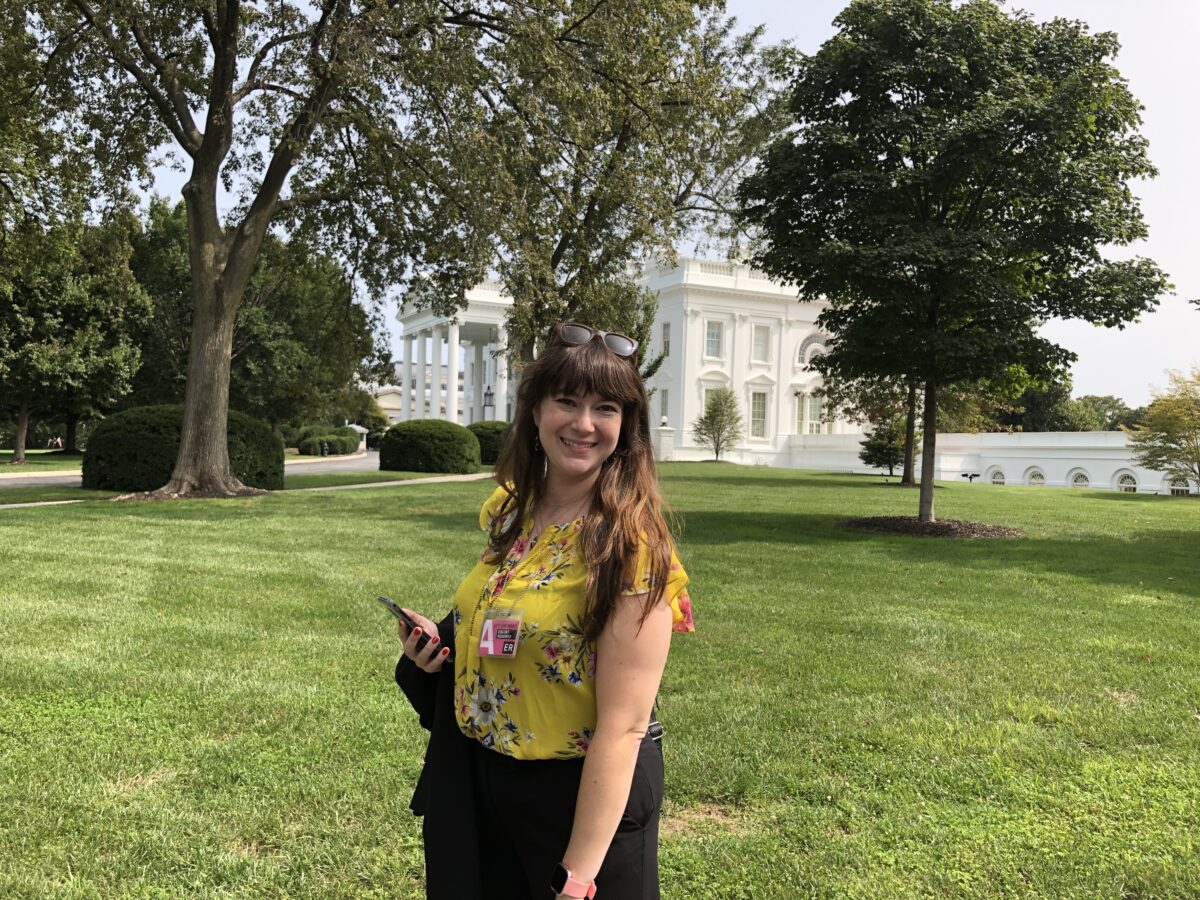 Lahav Harkov, The Jerusalem Post’s senior contributing editor and diplomatic correspondent, is as prominent of a figure on Twitter as she is within Israel’s political journalism scene.

Harkov, who moved to Israel at the age of 17, is the Post’s point person for all things relating to Israeli foreign policy and its revolving door of prime ministers. She also co-hosts The Jerusalem Post’s own podcast: “The Yaakov and Lahav Show,” alongside Editor-in-chief Yaakov Katz.

On this week’s episode of Jewish Insider’s “Limited Liability Podcast,” Lahav joins co-hosts Rich Goldberg and Jarrod Bernstein for a conversation about the U.S.-Israel relationship and potential policy changes under Netanyahu.

On the accomplishments and shortcomings of the Bennett/Lapid era: “I think Bennett and Lapid were not the same, for starters, but I think overall they tried to do something admirable, which is that they tried to do something that would unite Israelis and tried to pursue policies that wouldn’t be too divisive. And they failed, partly because of their own failures and partly because of how sort of, maybe ‘rabid’ is not a nice word, but the opposition was really just… wouldn’t cut them slack for one day, even when they were doing things that this government would support if it was coming up in their time. In terms of diplomatically, which is my area of coverage, there was a lot of… continuity from Netanyahu under Bennett; [Bennett] really didn’t do a lot of things very differently. The big thing I think, on Iran, is that [Bennett] was more willing to engage with the Biden administration, then you know, Netanyahu didn’t want to engage on that at all — He said, the JCPOA is completely non-legitimate and it’s a non-starter, whereas [Bennett’s] government said, we don’t like the JCPOA, but we will try to work with the Biden administration to make like incremental changes that could make it less bad. I think it worked for this government…”

“There were some other things that I think they were a little overly optimistic about making, you know, like trust-building steps with the Palestinians and that that would help, because the Palestinian Authority is so weak. The steps are to the Palestinian Authority and it just doesn’t make a difference to the average Palestinian that much…and it just didn’t work, and there was like a level of naivete in that, of people who maybe aren’t the most experienced in making these kinds of decisions. So it’s a mixed bag. I think they also trusted Jordan too much. I’m a Jordan skeptic, let’s say, people are always talking about Jordan as this font of stability in the region and that we have to support the king, but I don’t think he’s stabilizing for Israel. I mean, okay, it’s good that our longest land border is stable for now, like if the king is overthrown that would be really, really bad for Israel, but he basically uses Israel as his scapegoat all the time and I would say even encourages violence when it comes to the issue of the Temple Mount, and they gave him a pass for a lot of that in a way that Netanyahu didn’t.”

On Israel’s stance on the war in Ukraine: “There was a debate in the U.S. that I felt , in a lot of ways, it was not realistic. People were acting as though Israel is the U.S. and has the kind of money the U.S. has, the size and power the U.S. has…the one thing people kept talking about is Iron Dome, right? Like Israel has 10 Iron Domes, and when there’s rockets coming in from Gaza, they’re moved all around the country, they don’t stay in one place, they’re moved in order to cover the spots that they think are going to be trouble spots. Ukraine is 11 times bigger than Israel — you think if Israel gave up a couple of Iron Domes that would really be significantly helpful to them? They wouldn’t, and Israel can’t give up all of his Iron Domes, can’t manufacture them that fast. So that’s just one example of the debate not making sense.”

“We have this deconfliction mechanism with Russia, which is to say that Iran has a big military presence in Syria and Israel doesn’t want them to become really entrenched in, I mean at all, but especially not near Israel’s borders. And so Israel will bomb Iranian weapons convoys or other sort of Iranian attempts to set up shop near Israel…and Israel gives the Russian army a heads up because the Russian army also has a big presence in Syria, although less so now, and Russia stays out of the way, and Israel doesn’t want to jeopardize that because it’s a big security issue. It hasn’t changed that much that that’s sort of the consideration when it comes to not wanting to antagonize Russia too much. I mean, Israel has voted on Ukraine’s side in every U.N. vote — I think there was one where Israel abstained, because Ukraine has not voted in favor of Israel once since the war in Ukraine started, so there was one sort of tit-for-tat abstention recently, like a few weeks ago, but overall, Israel’s voted against Russia and for Ukraine — and Israel’s provided a lot of humanitarian aid, and in public statements mainly by Lapid…supporting Ukraine. But, it hasn’t changed in terms of what the actual policy is.”

“Now, Netanyahu, in the beginning of the war, said that Israel should have stayed out entirely…He didn’t say we should take Russia’s side, but he just said why do we need to have anything to do with this? Eventually, and I think that if you look at the timing, it was not long after we started seeing evidence of the Iranian involvement of Iran giving weapons to Russia, Netanyahu started to — if not praise this government, because he just doesn’t have it in him to do that — to espouse a similar kind of policy. And now when he’s asked about it, he said he’s going to consider it the policy and review it seriously when he enters office. I really doubt that things will change significantly.”

On whether or not new countries will be added to the Abraham Accords under Netanyahu:  “I think it’d be great if we could have relations with more Arab and Muslim countries — I do think that U.S. buy-in and U.S. encouragement is very important to making that happen, and I don’t think the Biden administration is opposed, but I just think that it’s not their priority…And so Biden, we saw him sort of talk about it, encourage it in Indonesia, for example, and Indonesia is definitely an option, a possible country that may normalize relations with Israel and there’s stuff going on there, there’s business relationships, anyway…So maybe Indonesia could happen without a greater U.S. buy-in, but the Saudis, I just don’t see it. First of all, publicly, they keep saying that they need to see some sort of progress with the Palestinians, and I don’t see that happening. I don’t think that has anything to do with Netanyahu being prime minister, by the way, there was sort of no chance of that happening under Bennett or Lapid either. And to make them change their mind, there would have to be some kind of really big sweetener that the Biden administration is not going to give them at this point…There’s another theory, like, as long as [King Salman bin Abdulaziz] in charge it’s not going to happen, but that once [Mohammed bin Salman] is king, he wants it to happen, and then it will, which is also a reasonable theory. So, who knows?”

On the Israel-U.K. relationship and the new Prime Minister Rishi Sunak: “The [anti-]BDS law was in [Sunak’s party manifesto]…I don’t know that there were such serious efforts before to actually pass it. I don’t know that there actually will be even though Sunak says there will be, but it’ll be interesting to see. When he, I don’t remember all the names of all the different jobs there, but he had some sort of job that was like the minister in charge of local government or something [Parliamentary Under-Secretary of State for Local Government], and he did push a law to not allow municipalities to boycott Israel. So he has a good record on that. And actually that’s really his only record when it comes to Israel, because he just wasn’t really in jobs that had much to do with foreign policy…So he has a good record on BDS.”

“Overall, Israel is one of the first countries that the U.K. signed a trade deal with after Brexit. And during COVID, there was a lot of health and science cooperation, research and things like that. A lot of tech cooperation — they’ve opened a very significant, like a big tech office, in Israel, trying to build cooperation between British and Israeli companies. So things are good. You know, you look at the Labour Party as well — just today, as we’re recording, Keir Starmer, the head of the Labour party, said he’s not going to let Jeremy Corbyn run in Labour. [Starmer said, “I don’t see the circumstances in which he will stand at the next election as a Labour MP,”] I think there are still people in the Labour party who share Corbyn’s opinions on Israel, but they’re not in the leadership anymore, and more relevant and more important at this point is that the antisemites are pretty consistently being kicked out of the party. Because, you know, I also care about the Jews in the U.K., not just what U.K. thinks about Israel.”

Lighting Round: Favorite Hebrew word or phrase? “How about, ‘אם לסבתא שלי היו גלגלים,’ ‘If my grandmother had wheels,’ which is like if you say something, like a hypothetical, then there’s this response in Israel like ‘well, if my grandmother had wheels, then she would be a bus.’” Favorite Yiddish word or phrase? “Maybe ‘verklempt.’ I had recently a whole Twitter thing, I asked people to share their favorite Yiddish curses to direct at Kanye West. My favorite Yiddish curse is ‘may you grow like an onion with your head underground.’” Best falafel in Israel? “Oh, Falafel Frishman. It’s in Tel Aviv. They’re best known for their sabich, but their falafel is excellent.” Favorite shishkabob? “There’s this place called Kaful, which is like right next to the shuk inTel Aviv. It’s very good.”