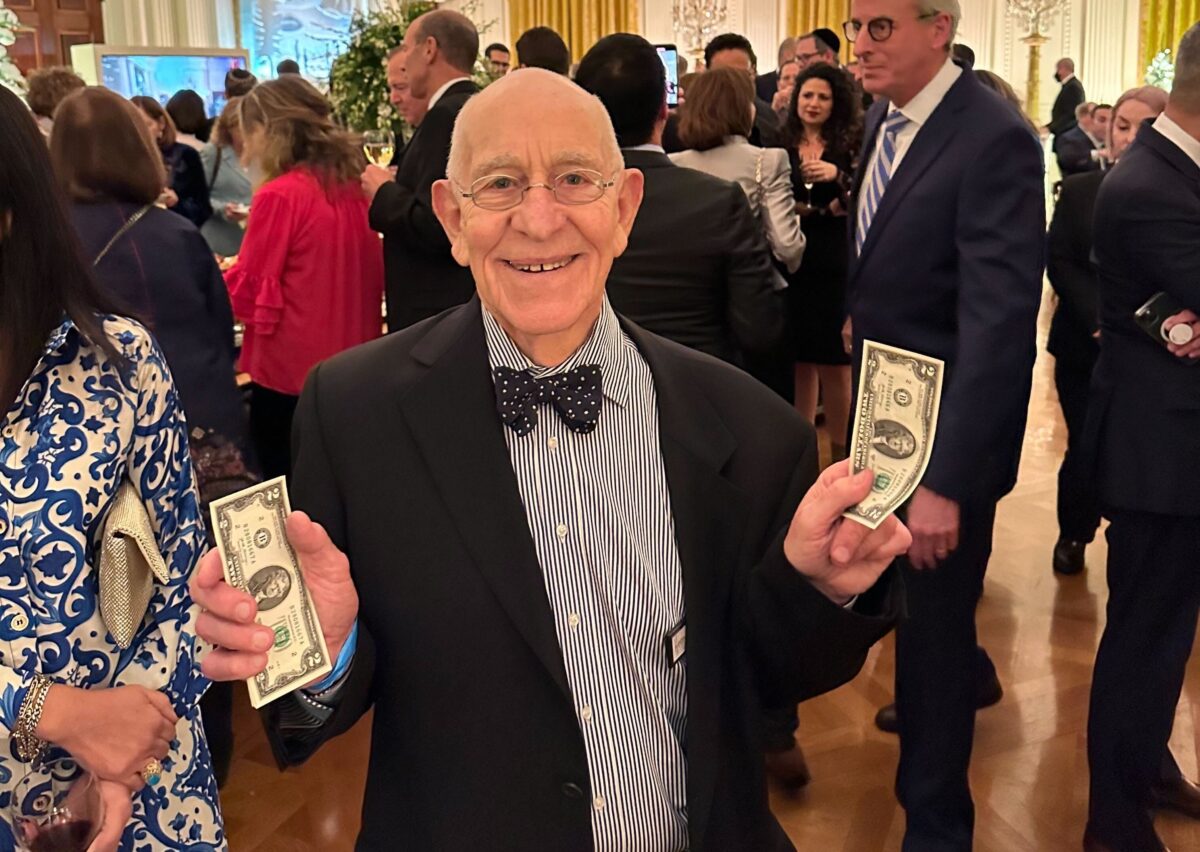 Some lucky guests at Monday night’s White House Hanukkah party walked away with two types of gelt: the traditional chocolate kind, and a $2 bill handed to them by Henry Zachs.

The philanthropist and telecommunications pioneer from Hartford, Conn., knew just two other people at the event. But the bespectacled 88-year-old, wearing a navy-and-white striped shirt and a navy bowtie with white polka dots, didn’t mind.

He went up to anyone in the room — except the president, though Zachs swears he would have if he had gotten closer to Joe Biden — and offered them a rare $2 bill.

“I went to the bank and I got 200 $2 bills. I didn’t know that there would be 500 or 600 people there, so I gave those bills out,” he told Jewish Insider in a Tuesday phone call. He had just four left at the end of the night.

Zachs is not a major political donor (although, he points out, he was part of the Trinity College Young Democrats when he was a student there in the early 1950s), so unlike many others in the room, he was not used to schmoozing with the Washington set. But he said Biden’s speech was “superb.” Zachs had only been to the White House once before, on a tour more than three decades ago.

But in Hartford, his hometown, Zachs is a familiar figure. He sits on the board of nearly a dozen nonprofits, and he started a major project called Endow Hartford 21, encouraging area organizations to create endowment funds.

The roots of Zachs’ gelt tradition can be traced back to an unlikely source: an oyster house. The owner of Honiss Oyster House, a once-iconic Hartford culinary institution that has since closed, would give out silver dollars or $2 bills to young visitors on Hanukkah. Zachs brought the tradition to his family, and has given out $2 bills to his grandchildren for years. Last night was the first time he took the practice into the outside world.

“There wasn’t a single person that said, ‘Oh, I don’t want the money. I don’t take money.’ There only was one congressman, he says, ‘I can’t take it.’ That I understand,” Zachs said with a laugh. He does not remember which member of Congress it was.